6 Disney Clone Pairs You May Not Recognize 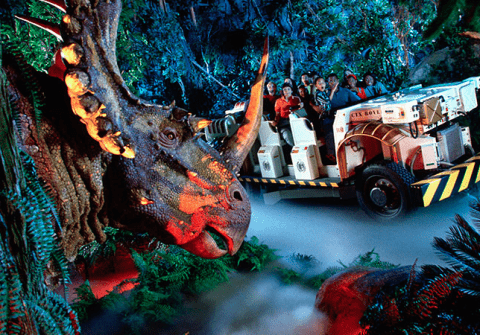 Cloning. It's become a dirty word in the circles of Disney Parks fans. That's probably unfair, since it was Walt's idea to take the best of his California park and transplant it - with some additions, subtractions, and general changes - as Florida's Magic Kingdom. Cloning continues today, albeit with a bit more finesse (think of Toy Story Midway Mania and the three drastically different ways it's presented across the world) and that's probably a good thing. Why should visitors to Orlando and Tokyo be denied a Midway Mania just to keep it exclusive to California?

There are identical clones (Soarin' Over California and Soarin', for example) and attractions that use the same ride system but in innovative new ways (Test Track and Radiator Springs Racers; or Pooh's Hunny Hunt and Mystic Manor), and even "Spiritual Sequels" with disconnected rides related "in spirit."

But not all cloning is equal. Below are six pairs of attractions that are identical on the inside but so different on the outside, you may not even notice it. 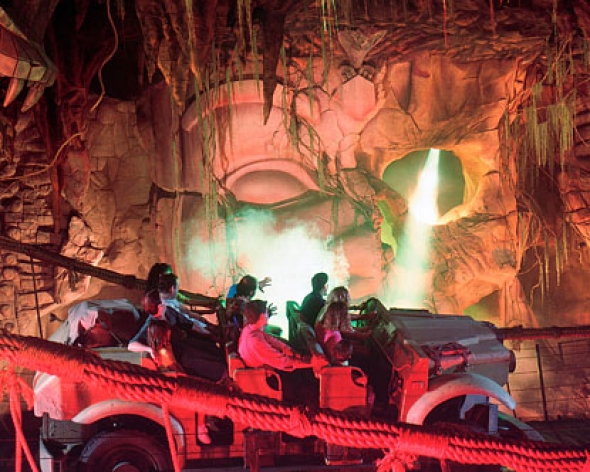 When Disneyland opened Indiana Jones Adventure: Temple of the Forbidden Eye in 1995, the revolutionary ride stunned the industry with its massive setting, dark and foreboding story, and unimaginable special effects. The star, though, was its EMV – Enhanced Motion Vehicle... a technology so incredible, it ranked among our list of the 7 Modern Wonders of the Theme Park World.

Each vehicle on Indiana Jones (disguised as troop transports from World War I) is like a giant slot car powered along a smooth, level track. As the chassis glides, the passenger platform is attached to a motion base, which means it rocks, dips, shuffles, rumbles, and more, simulating rough terrain, climbing over rubble, and exaggerating turns as riders race to escape the malevolent gaze of the double-dealing deity Mara. The ride is considered one of the greatest Disney dark rides ever, and earned its own in-depth entry in our library of Modern Marvels: Indiana Jones Adventure – Temple of the Forbidden Eye.

It would be pretty obvious to most riders that DINOSAUR – which debuted at Disney's Animal Kingdom in 1998 as Countdown to Extinction – uses the same EMV vehicles to simulate a race through the final moments of the Cretaceous period before a cataclysmic asteroid destroys the dinosaurs. What's far less obvious is that Indiana Jones Adventure and DINOSAUR share a layout, too!

Though it may be hard to believe, your path through the dismal, doomed jungle is almost an exact replica of the race through the Temple of the Forbidden Eye. But for a few (literal) cut corners, each twist and turn is the same, with analogous scenes so well-disguised, even those lucky enough to have ridden both are unlikely to realize it! Of course, that's also one of the chief complaints about DINOSAUR. In a vacuum, it's a successful, terrifying, exciting dark ride. But knowing that set dressing is all that separates it from Indiana Jones Adventure makes it fair game for comparison... and in a head-to-head match, DINOSAUR doesn't stand a chance.

A Shared Moment: On Indiana Jones Adventure, the vehicle exits the station and enters the Chamber of Destiny where one of the three doors swings wide, opening into a slight incline up toward Mara's cursed face and then a sharp left turn into a crumbling hallway. On Dinosaur, the doors to the Time Tunnel open, leading to an incline toward the Cretaceous jungle ahead, followed by a sharp left into a jungle clearing. 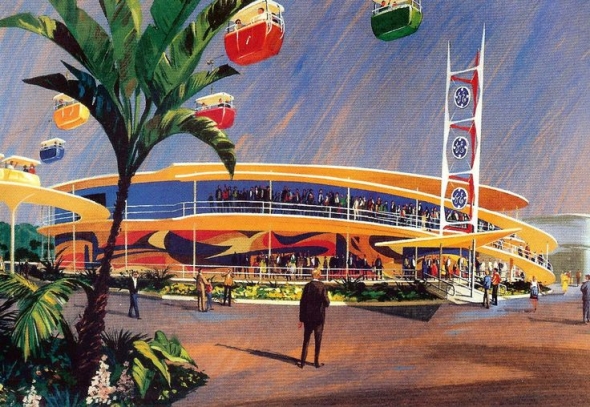 Created by Walt Disney as the headlining attraction for General Electric's pavilion at the 1964 World's Fair, Carousel of Progress is an incredible animatronic show that chronicles one family's advance though the century as the mircles of electric convenience make life easier and easier. We traced the origins of this Walt Disney original in Modern Marvels: Carousel of Progress – a must-read for Disney Parks history fans.

The ingenious attraction is made up of an outer ring of six theatres which revolves around a central core divided into six stages. To the tune of the Sherman Brothers' "There's a Great Big Beautiful Tomorrow," the show was a tremendous hit for General Electric at the World's Fair. After the Fair's closure, the ride was packed up and relocated to Disneyland for a 1967 debut within a Lost Legend: Walt's New Tomorrowland. 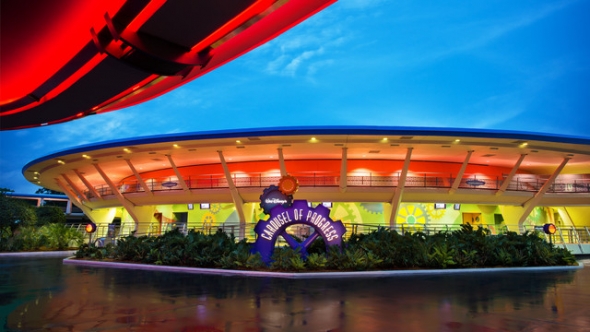 Disneyland wasn't the attraction's final stop, though. In 1975, it was relocated to the brand new Magic Kingdom, where it continues to play today as the longest-running stage show with the most performances in American history. Back at Disneyland, the uniquely circular revolving theater was re-used for another animatronics-based revue show called America Sings, which closed itself in 1988 so its innumerable critter animatronics could be re-used inside the new Splash Mountain (where they earned a spot on our must-read Countdown of the Best Animatronics on Earth).

The Carousel Theatre remained empty for a staggering 10 years (just one of many blemishes on a dark period in Disneyland history) until the arrival of an expansion so despised, it earned its own in-depth entry in our infamous series, Disaster Files: New Tomorrowland 1998. As part of this dismal vision of the future, the revolving theater was reused as a West Coast outpost of Epcot's Innoventions. During its time as Innoventions, the building continued to rotate (albeit constantly and not in the stop-and-go "show" style) with the exhibits hosted in the inner, stationary core. Supposedly a showcase of future technologies, it wasn't long before the simple walkthrough felt as dated as Epcot's version, and simply wasn't worth the land it occupied. 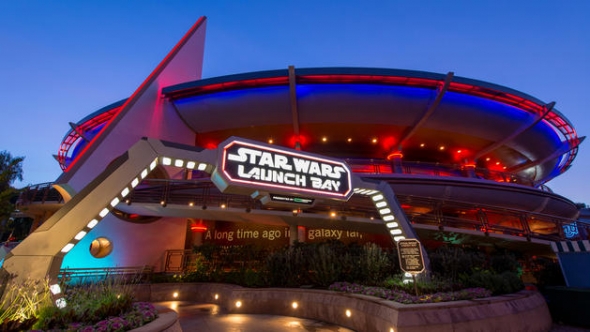 In 2015, the building was recast as the more general "Tomorrowland Expo Center," able to host rotating, temporary exhibits. Right now (and for the foreseeable future), it's got Star Wars Launch Bay on the bottom floor. A Marvel Super Hero HQ on the second level closed and never re-opened. Innoventions may have been a waste of space, but it's got nothing on Star Wars Launch Bay – a laughable excuse for an "exhibit" that's high on gift shops, low on fun or interactivity. And as part of the 2015 transformation, the building's constant, slow rotation was halted permanently.

Even if Star Wars Launch Bay is no better than the tired Innoventions that it replaced, it's very interesting to stand within the circular building once home to the revolving, two-story Carousel of Progress, now home to a Star Wars museum! Long term, fans expect the Tomorrowland Expo Center to go the way of the dodo, opening up precious land in the cramped park. 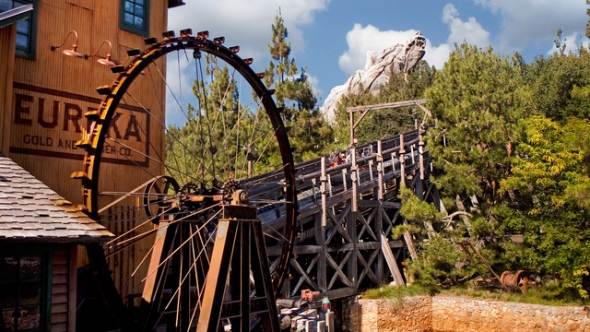 One of the (few) noteworthy attractions at Disney California Adventure when it opened, Grizzly River Run also happened to be one of the park's most beautiful. That's thanks to its setting in Grizzly Peak, a land meant to transport guests to a 1950s National Park, back when the whole family would pack up the Rambler and hit the road. The gorgeous, forested ride around and through the caverns of the eponymous Grizzly Peak is beautiful and produces gorgeous views for passers-by, too... Waterfalls, forests, boulders, mills...

Unfortunately, the ride itself has significantly less that you'd classify as "Disney quality." One infamous omission: wildlife. Not a single animatronic critter can be spotted along the rapids run, which seems oddly out of place for a Disney park... What Grizzly River Run does offer is the longest drop on any rapids ride.

Unless you include its twin. 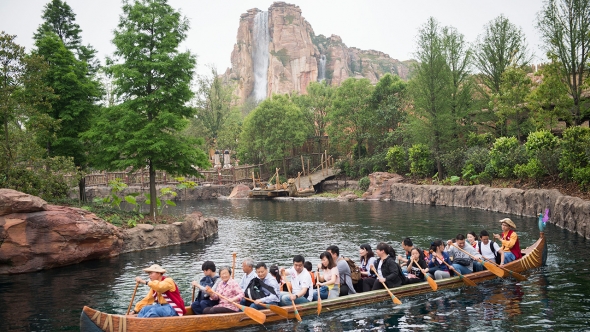 In 2016, Disney opened its first park in mainland China. And Shanghai Disneyland changed everything. New lands, new rides, and new versions of classics you though you knew. In fact, you can catch up on all the unique elements of this "distinctly Chinese" park in our In-Depth: Shanghai Disneyland feature. Here's what you need to know: the Shanghai park doesn't have an Adventureland at all! In its place is Adventure Isle, with a quasi-Indiana Jones story that places us in the 1930s alongside the League of Adventurers as they encounter a remote island – long believed to be only a myth – and its native Arbori people. All of the land's rides and attractions are placed within this unique story.

One of the headliners is Roaring Rapids, a wild river run through the rocky caverns and valleys of the land's iconic Mount Apu Taku to uncover the truth behind the mysterious roar from behind the falls. The locals say it's due to the imposing river guardian Q'aráq who protects the isle's waterways, but that can't possibly be true... right? In truth, Roaring Rapids is even more bare than Grizzly River Run, with only a few vines and brambles to break up the red rocks... But Roaring Rapids' notoriety stems from its up-close encounter with Q'araq itself in the form of an animatronic so stunning, it ranks near the top of our must-read Countdown of the Best Animatronics on Earth. 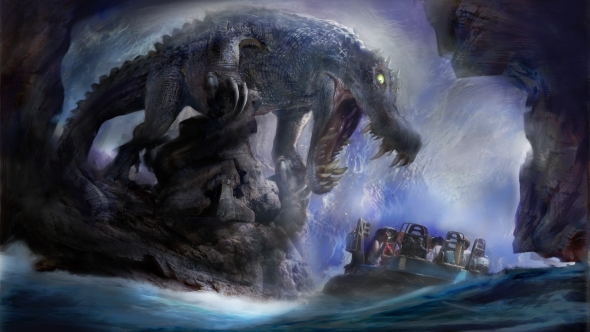 Even if their highlights, drawbacks, stories, and settings couldn't be any more different, fans were shocked to uncover that Grizzly River Run and Roaring Rapids are almost exactly identical sisters with the same layouts wrapped in very different packages. Two of Disney's three attempts to incorporate rapid rides into the parks (with the third being Animal Kingdom's Kali River Rapids) don't accumulate to much evidence that the ride system is fit for the kind of storytelling Disney's known for, but at least they're great ways to cool down.

What about the Dumbo ride and Aladdins Magic flying carpets, both in the Magic Kingdom??? Those are the same ride with different stories.

I recognized many of these and rode on most. But there is one you should have included. Space Mountain in Paris and Rocking RollerCoaster in Disneyworld Hollywood Studios.

They're totally different rides. They're both launched roller coasters, but have nothing else in common besides that. :P The attractions listed here are direct duplicates - "clones" - that you might not recognize are exact copies.

I used to love the campiness of Carousel of Progress -- but the last time I rode it in 2013 I was so disappointed that it was a filthy, dilapidated mess. Carpets were dirty, seats were torn and it smelled like a gym locker room. It was so un-Disneylike compared to the high level of cleanliness and attention to detail in other areas of the Magic Kingdom.

Nice article. Knew most of it already.

Although you say in the title of the last oone Walibi Belgium. Can you please change that to Holland? Love the Belgium country, but it is our coaster haha. At least you did not say Denmark... happened before as well!