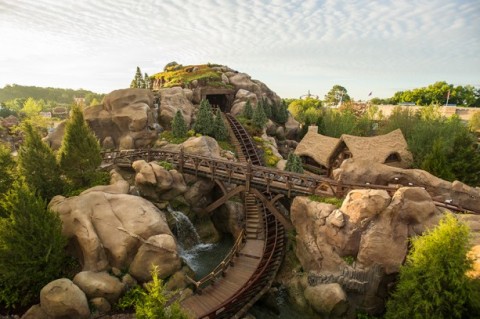 Walt Disney World has confirmed the opening date for the Seven Dwarfs Mine Train, the highly-anticipated new roller coaster at the Magic Kingdom.

The coaster will officially open on May 28, 2014 - although it still possible (and likely) that there will be "soft opening" periods between now and then during which riders can experience the attraction. Indeed, members of the media have already boarded the Seven Dwarfs Mine Train for special previews during a media event that is currently taking place at the park.

The Seven Dwarfs Mine Train takes guests on a tour around the diamond mine from Snow White and the Seven Dwarfs, as well as through the enchanted forest and Snow White's cottage. The ride's main gimmick is its unique cars, which swing outwards as they round corners in the track. Disney's signature audio-animatronic characters also feature heavily in the family-friendly ride, and have been enchanced with new technology that involves projecting expressions onto their faces.

The characters can be seen in the ride-through video of the Seven Dwarfs Mine Train below:

We'll be posting a round-up of opinions on the Magic Kingdom's newest addition very soon.

cannot wait for a new ride.we will be there in july and plan on riding it before anything else.

We will be there then - I tried to added to FP+ & its not on the list (yet) hopefully if they do open May 28th - we can get on before we leave!

:-( We're looking forward to ride the seven dwarfs mine. We'll be arriving this Sunday. Hopefully we will have a chance.

:-( We're looking forward to ride the seven dwarfs mine. We'll be arriving this Sunday. Hopefully we will have a chance.

That was one of the lamest ride dedications I'd ever seen. And here we are, May 2nd.....they dedicate the right, and it's STILL not opening fully until May 28th? Come on.... Why not do the dedication until May 25th or 26th then?