The 21 (Fake) Mountains That Every Disney Fan Needs to Summit 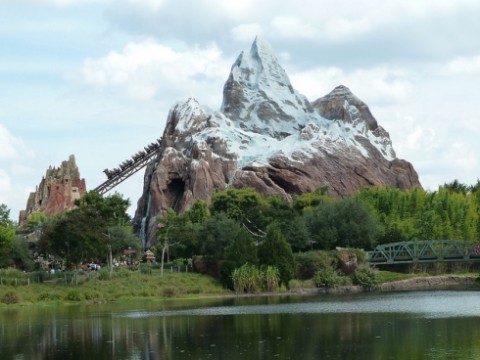 Ever since the Matterhorn opened at Disneyland in 1959, Disney has become something of a specialist at building fake mountains. These towering structures are largely built using steel and concrete, but you'd be hard-pressed to tell them from the real thing at first glance. Particularly as you'll usually be racing past them on a roller coaster or some other contraption.

There are 21 mountains in place at Disney's theme parks at present, with several more under construction at Shanghai Disneyland. In the real world, mountaineers like to take on the "Seven Summits" challenge, scaling the highest peak on every continent. Disney fans could take on a similar challenge, attempting to scale all of the company's faux mountains. How many Disney mountains have you summited? Have a read through and let us know in the comments!

Note: We're a little dubious about some of the heights that Disney lists for its mountains. For example, we really doubt that Big Thunder Mountain is 90+ feet taller at the Magic Kingdom than it is at Disneyland, but that's what Disney's stats claim. The explanation is that sometimes Disney lists the height from sea level (as at the Magic Kingdom), and sometimes it lists it from ground level (as at Disneyland). 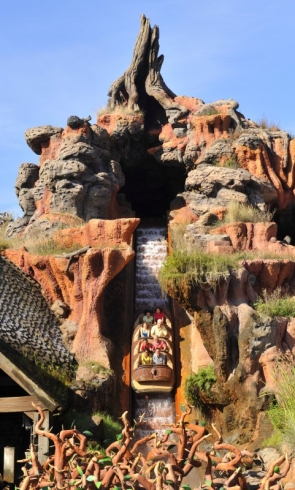 Not far from Big Thunder Mountain sits a slightly smaller peak. This one is populated by more than 65 audio-animatronic characters from Song of the South.

The climbing route: The concrete flume winds around Splash Mountain for more than 2,600 feet. You may get a little wet during the descent. 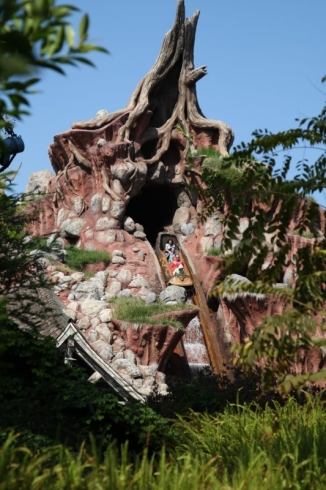 The creation of Splash Mountain was one of the most expensive projects ever undertaken by Walt Disney Imagineering, at around $75 million. It also ran over budget, so Disney closed down America Sings and reused some of the audio-animatronic characters from that attraction.

The climbing route: Climb into a log for a nine minute journey around the inside and outside of Splash Mountain. 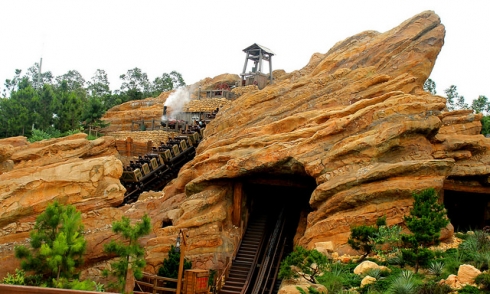 Opened as part of the Grizzly Gulch expansion in 2012, Big Grizzly Mountain took 14 months to create. More than 30 professional sculptors and 20 painters were involved, creating a peak that is inspired by Northern California's National Parks. 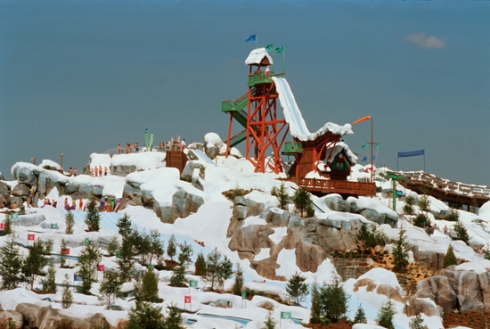 Mount Gushmore is the icon of Disney's Blizzard Beach, the Walt Disney World water park that is themed around a freak snowstorm in Florida. Most of the park's attractions are based around the artificial mountain, which is split into three colored slopes (red, green and purple).

The climbing route: You can take a leisurely trip to the top of Mount Gushmore via the park's chairlift. You can then choose a route back to the bottom - from the extreme (Summit Plummet) to the relatively relaxed (Runoff Rapids). 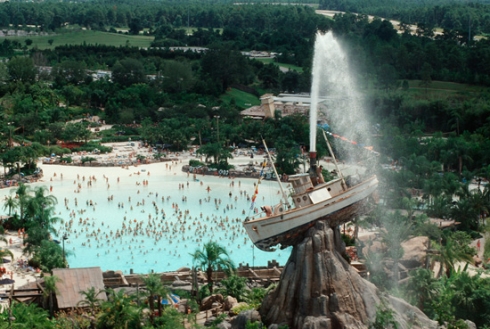 At the top of Mount Mayday sits "Miss Tilly", a shrimp boat that has been impaled on its peak as the result of a massive storm. Every half an hour, a 50-foot geyser of water erupts before the bells of the watch sound on Miss Tilly.

The climbing route: You'll have to clamber up the slopes of Mount Mayday, from which you can return to the ground via slides such as Mayday Falls. 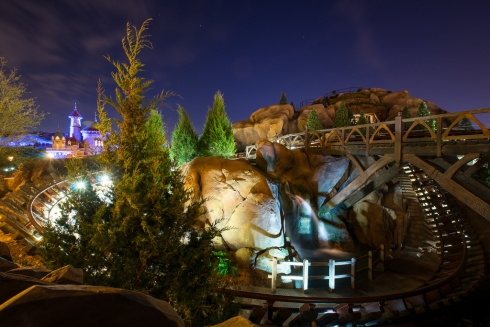 The mountain at the heart of the expanded New Fantasyland at Disney's Magic Kingdom hosts a diamond mine that is worked by the dwarfs from Snow White and the Seven Dwarfs.

The climbing route: The Seven Dwarfs Mine Train carries guests around the diamond mine and the surrounding enchanted forest. Its trains swing from side to side as they go.

Splash Mountain at Tokyo Disneyland is a little larger than the versions at the Magic Kingdom and Disneyland. It opened in 1992, and Japanese versions of classic songs How Do You Do? and Zip-A-Dee-Doo-Dah are played out to those who scale it.

The climbing route: The Splash Mountain log flume ride is slightly taller at Tokyo Disneyland than it is elsewhere, featuring a 60-foot drop. 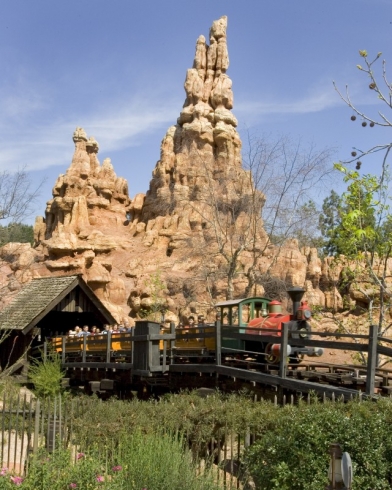 The first version of Big Thunder Mountain opened at Disneyland in 1979. While the original design (for the Magic Kingdom) featured sharp-edged mountains and was inspired by Monument Valley in Arizona, the Disneyland version was softened, with muted colors inspired by Bryce Canyon in Utah.

The climbing route: Clamber aboard the "wildest ride in the wilderness", Big Thunder Mountain Railroad. 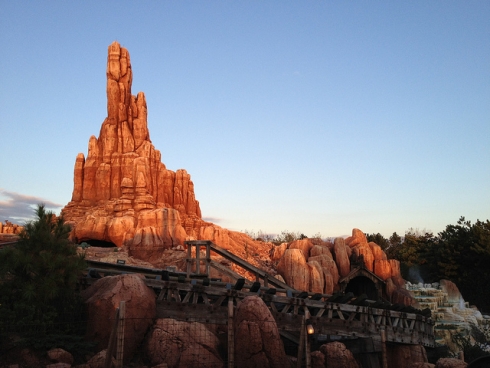 Tokyo Disneyland's Big Thunder Mountain opened in 1987, and is almost identical to the Magic Kingdom's.

The climbing route: Tokyo Disneyland's Big Thunder Mountain was the first version of the ride to be manufactured by Dutch supplier Vekoma. 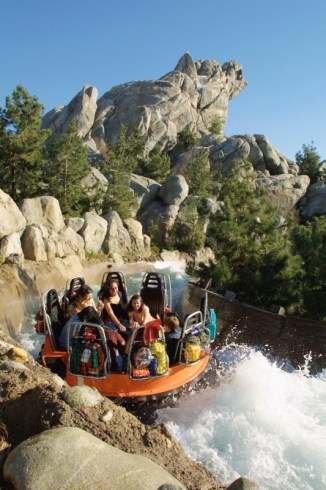 Shaped like a grizzly bear, Grizzly Peak was created using large steel cages, which were then lathed and covered to form rock-like shapes.

The climbing route: Grizzly River Run is a spinning rapids ride through caverns and mills, under bridges and past waterfalls. 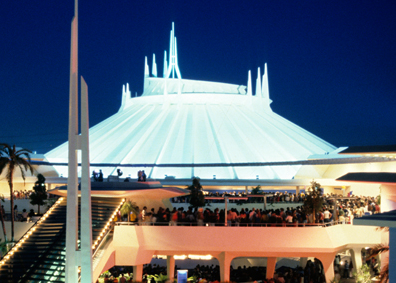 Disneyland's version of Space Mountain is smaller than the Magic Kingdom version, and does not feature the same dual-track design. The exterior of the "mountain" itself is similar, though, and it hides galaxies within.

The climbing route: Hop into a "rocket" for a wild mouse roller coaster ride in the dark.

I've ridden almost all of them!! All the ones in Disney World (except Snow White because its still being built but looks cool yet spooky at the same time) And this summer I'm going to Disneyland. They're so much fun and I'm super excited.