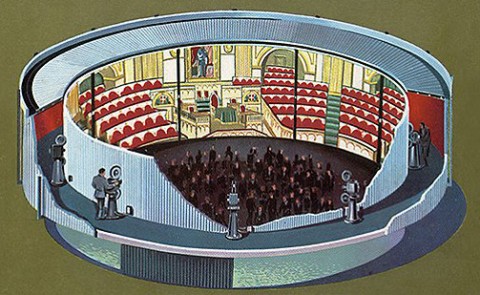 Walt Disney had a track record of introducing new technology to the world's cinema screens. The studio that Walt had founded with his brother Roy had produced the first animated short to boast synchronized sound, as well as the first to benefit from the use of the innovative Technicolor process. In 1937, it released its first feature-length animation, Snow White and the Seven Dwarfs. Despite running massively over-budget, the film raked in a then-enormous $7.8 million worldwide during its initial theatrical run.

In 1955, Disney introduced another innovative type of movie, which he eventually dubbed Circle-Vision 360. The first screen was installed in Disneyland's Tomorrowland and opened in 1955. The first movie, A Tour of the West, offered visitors a documentary tour of the western United States, surrounding them completely with a 360-degree image.

But Walt had much grander plans for this technology than simply installing it at a single theme park. He wanted to open a nationwide chain of Circle-Vision 360 cinemas, and to produce a range of different movies to be shown at them. Essentially, he hoped to follow the model that was eventually adopted by IMAX - and had he lived longer, he may just have pulled it off. Let's take a look at how far he got...

Walt wanted to place viewers directly into the thick of the on-screen action, but he didn't want to rely on the flimsy, uncomfortable glasses employed by the 3-D movies that were flooding cinemas during the 1950s. Instead, he wanted to completely surround them with the movies, so that they could look in front of them, to the side and even behind them to get a different viewpoint. 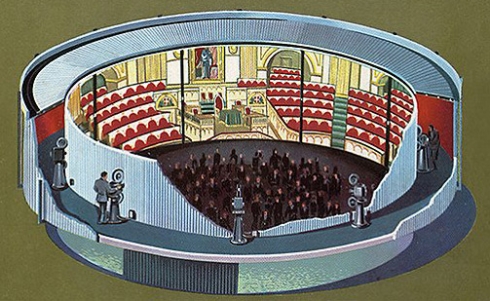 The answer was a system developed in-house, primarily by Disney legend Ub Iwerks - a man who had earlier pioneered 3-D films in the 1930s using a makeshift camera set up in the back of Studebaker vehicle. Iwerks devised a system that employed 11 different screens arrayed in a circle. There was a small gap between each screen, allowing an equal number of projectors to project the images. The system was initially named Circarama.

The Disney system wasn't the first to try and broaden the viewer's aspect ratio. In 1952, the feature-length This is Cinerama had pulled off a similar trick - with quite spectacular results. The movie premiered on September 30, 1952 at the New York Broadway Theater. It began in a standard 4:3 aspect ratio, in black-and-white. It then told the story of the evolution of motion pictures, leading up to the introduction of sound and color. Suddenly, the image expanded to cover two further screens, in full color. 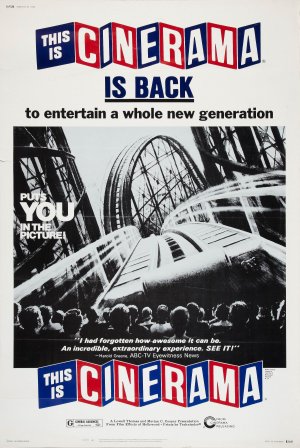 The movie was a huge success, pulling in a then-huge $12.5 million at the box office despite requiring specialist technology that had to be moved from city to city. The technology was much less ambitious than Disney's, but the name chosen for Disney's version - Circarama - could undeniably be seen as derivative. The producers sued Disney, successfully forcing a name-change to Circle-Vision 360.

The first Circle-Vision 360 installation (we'll use the final name to avoid confusion) was at Disneyland. A Tour of the West was produced using a camera mounted on an American Motors vehicle, with the auto manufacturer taking up sponsorship of the attraction. 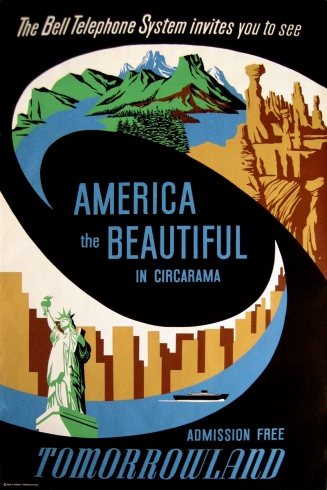 Walt, excited by the technology, didn't stop there. A second theater was built for the United States Pavilion at the the 1958 World's Fair in Brussels, and a new film - America the Beautiful - was produced to show off the wonders of the country. According to one official, it became "the hit not only of the American Pavilion, but of the whole Expo". The exhibit was transferred to a nylon geodesic dome at the American National Exhibition in Moscow the following year. Queues of up to 100 yards developed, as around 1,000 Russians per hour viewed a film that the US government hoped would convince them of the benefits of capitalism.

Walt recognised the limitations of the "road show" style of distribution employed by "This is Cinerema" and the impracticality of moving Circle-Vision 360 setups from one city to another. He wanted to build a set of permanent Circle-Vision 360 cinemas instead.

By 1961, another movie, Italia '61, was in the can (the first to use just nine cameras, rather than 11). Discussions over the production of a third, to cover Europe, were already underway. In 1963, Walt had also begun seeking sponsors for a Circle-Vision film about Canada, to be to be showcased at Expo 67 in Montreal.

But just where might have these Circle-Vision theaters have been located? Well, we know of two possible locations. Let's take a look.