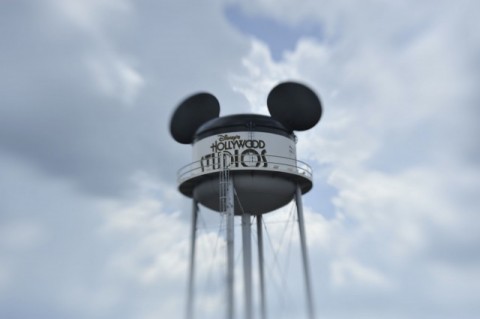 Disney's Hollywood Studios is home to some of Walt Disney World's best rides and shows - and it's also packed full of small details that are easily overlooked.

The park opened in 1989, one year ahead of rival Universal Studios Florida. It was accused of being light on rides, and worthy of only a half-day visit. But it has since been greatly expanded and is now firmly established as one of the most-visited theme parks in the world. The rides, shows and walkways of Disney's Hollywood Studios are packed full of tiny, authentic details - far too many to list in a single article. But to get you started on your next visit, here's a list of 32 hidden secrets at the park. Let us know of any we've missed! 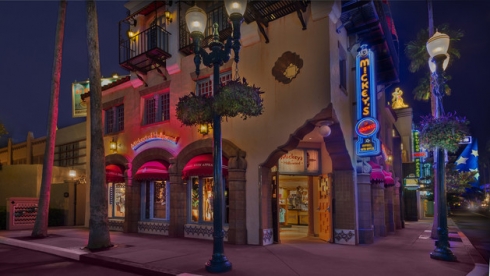 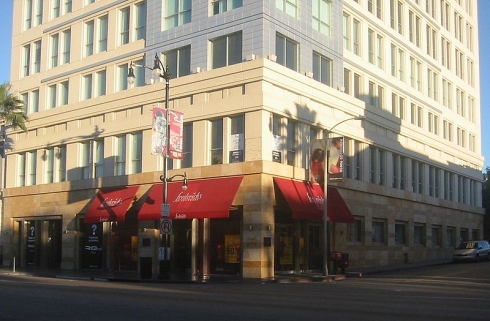 Frederick's of Hollywood is a well-known retailer of women's lingerie. It was started by Frederick Mellinger (the inventor of the push-up bra) back in 1947, with its flagship store standing on Hollywood Boulevard (it recently moved to larger premises nearby). 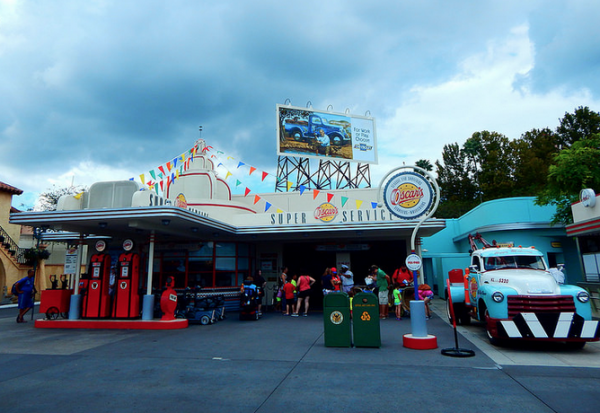 The gas pump on the right as you enter the park is marked with the opening date of Disney-MGM Studios.

30. Taking "inspiration" from a rival

As Disney established itself in Florida with the opening of Walt Disney World in 1971, Universal's then-owner MCA was looking on enviously. In 1981, MCA purchased 423 acres of land in Orlando on which to build a Florida version of its famous studio tour. The plans called for a "front lot" walking tour, as well as a tram tour through the studio’s backlot. A major set-piece, the "Hollywood Canyon", would see a tram rolling onto a bridge in view of the Hollywood Hills. A massive earthquake would then strike, causing a dam to crack and a wall of water to pour down towards the tram, which would escape into an oil field in time for riders to witness a semi-trailer truck explode after crashing into an oil tank. Disney's CEO, Michael Eisner, was not about to let Universal invade its turf without a fight. The initial plans for Disney-MGM Studios, announced in 1985, bore a striking resemblance to those for Universal's tour. The main attraction would be a tram tour past four working soundstages, an animation building, backlot sets and post-production facilities. One of the set pieces to be included in the tour would be “Catastrophe Canyon”, during which an earthquake would shake the tram, cause fires to ignite, lead to an oil tank explosion and trigger a flash flood. The similarities to Universal’s proposed Hollywood Canyon were undeniable. MCA was furious, but had no choice but to revise its plans for Universal Studios Florida. The tram tour – the signature element of Universal Studios Hollywood – was dropped altogether from the plans for the Florida attraction, in favor of a number of separate attractions. 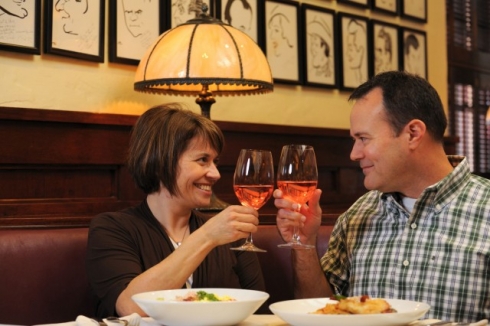 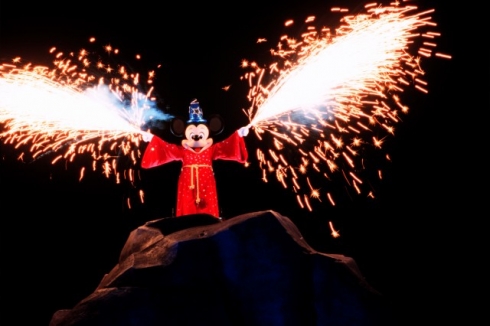 The front of the vast lagoon that hosts Fantasmic is, in fact, just 1.5 feet deep. The moat, though, does still hold 1.9 million gallons of water. 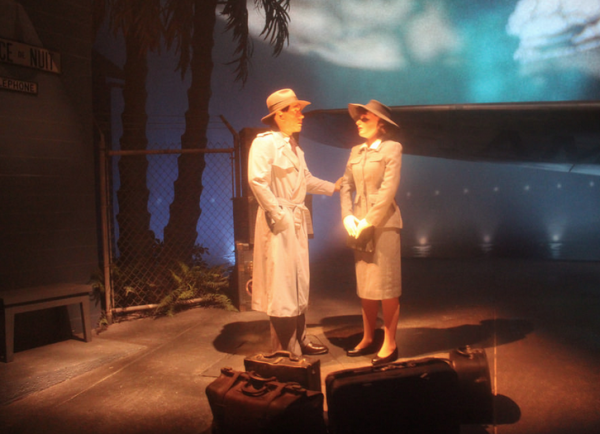 The front half of an airplane can be seen in the Casablancasequence of the Great Movie Ride over at Disney's Hollywood Studios (contrary to rumors, this is not the same plane used in the movie itself - but it is a real Lockheed plane). On the Jungle Cruise over at the Magic Kingdom, look out for the back half of the plane. 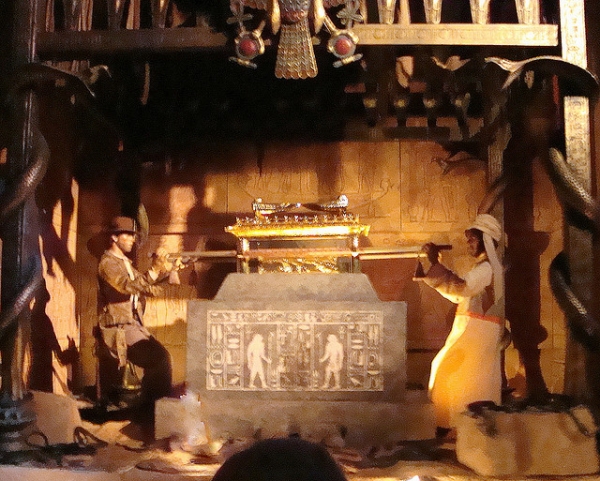 As you enter the Indiana Jonesroom of the Great Movie Ride, look at the wall to your left. Just before you leave the area, you'll see a Pharoah-style Mickey Mouse and "slave" Donald Duck. 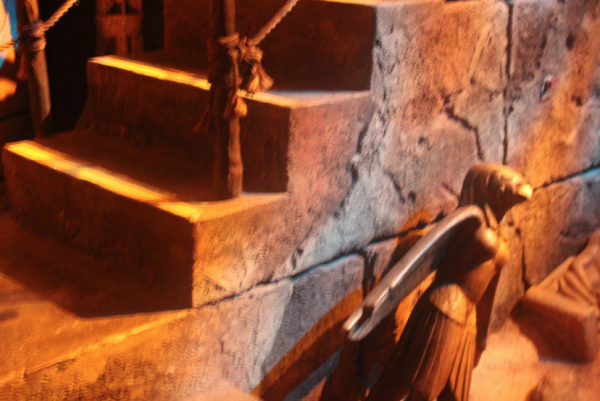 In the Egyptian section of the Great Movie Ride, take a gander at the wall tiles. Most of them show typical hieroglyphs, but some are rather different - featring hidden Mickeys and even Star Warscharacters.

24. A date of significance 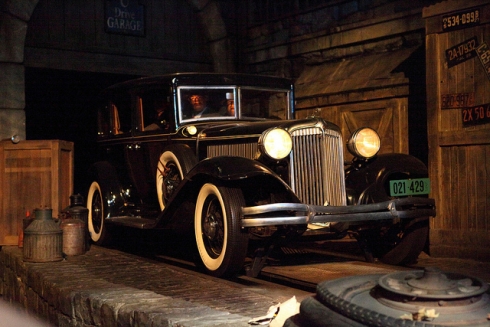 The car in the gangster shoot-out scene of the Great Movie Ride features the license plate number "021-429". This is the date of the infamous Valentine's Day Massacre - February 14, 1929. 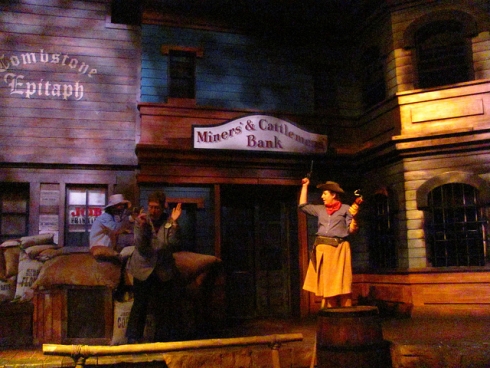 The Great Movie Ride has two possible shows, known as "A" and "B". When the park isn’t busy, only the "B" show will run and you’ll see a single vehicle sitting on the dock. If there are two vehicles on the dock and you happen to get into the front one, you’re in for a real treat. This is the much rarer "A" version of the ride. Even when this show is running, it typically only shows up in one or two of the five sets. If you really want to get onto this vehicle, you can always ask if an "A" is running. Cast Members will usually accommodate if they can. Passing through the first set of doors, you find yourself in a seedy alley. To the right is James Cagney from The Public Enemy. If you’re on a “B” vehicle, you’ll stop here to wait for a red light. A live gangster enters the scene and hijacks your vehicle, taking over for the next leg of the show. If you’re in an "A" vehicle, you’ll pass right through the gangster scene and stop on an old Western set with Clint Eastwood and John Wayne. This show is hijacked by a bandit and features pyrotechnics in the ensuing firefight. 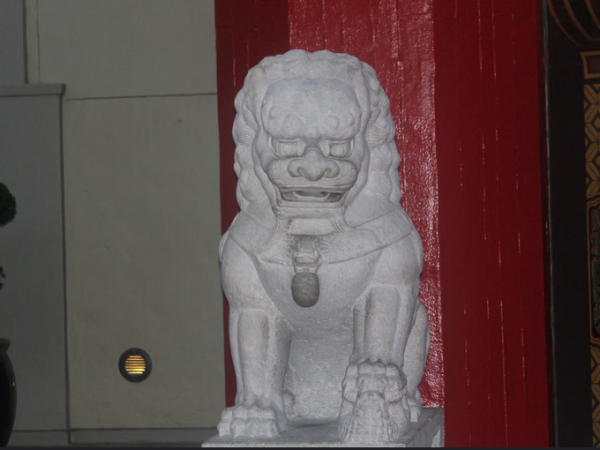 The building housing the Great Movie Ride is a replica of Grauman's Chinese Theater in Los Angeles. The statues standing outside are "lion dog" statues, also known as "foo dogs". The one of the left is female, and the one on the right is male. 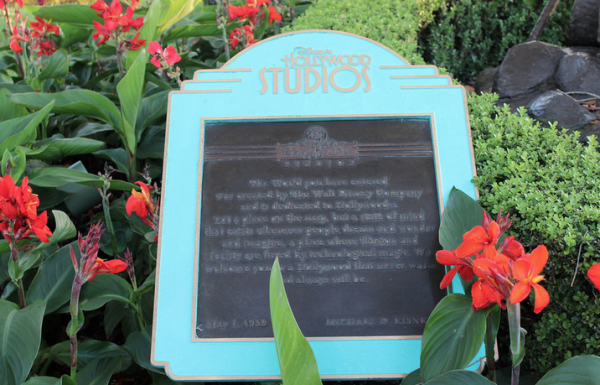 A statue of a movie director sits at the end of Hollywood Boulevard, accompanied by a plaque dedicating the park. In 2008, a frame was placed around the plaque to reflect the park's new name, Disney's Hollywood Studios. But you can still the original name - Disney-MGM Studios - on the plaque itself.

When I visited Disney's Hollywood Studios (MGM Studios) in May of 1993, I was able to ride the original backlot tour. During the tour we came to a yard full of items from various movies, including the tail section of the plane from the Casablanca scene in the Great Movie Ride. The CM announced that after Disney secured the purchase of the plane, they discovered the serial number matched the very plane used in the Casblanca movie. It's hard to believe that the backlot ride would be responsible for starting a rumor?!?

Looks like #30 needs to rewritten in the past tense. :(