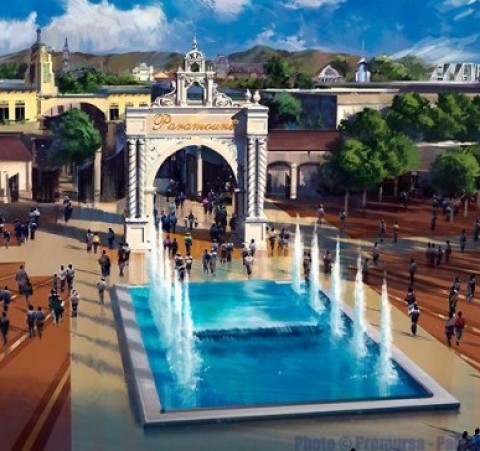 In 2014, the green light illuminated once again as backers of Paramount Park in Murcia, Spain announced that they had found the funding they sought. At that point, official plans, 3D renderings, ride details, and a commitment to start construction immediately were released, all with the promise that Paramount Park would have a grand opening in 2015!

Problem is, 2015 came and went... with no movement on Paramount Park. As of early 2016, the local media suggests that "only a very brave and optimistic man would bet on construction starting within the near future." (Similarly nightmarish cancellations have plagued the other announced Paramount Parks in the UK and South Korea, neither of which has come close to materializing.)

We now feel confidently here that Paramount Park will never materialize. If it had ever come to life, the theme park would've been only one element of a massive resort that promised a “CityWalk” style shopping, dining, and dancing complex, no less than seven massive resort hotels, a “Lifestyle” center, a convention center, an exhibition hall, condos, a casino, and a mall. (Is anyone else getting Disneyland Paris flashbacks of high expectations, empty hotels, and crushing debt?)

Even if Paramount Park's death is all-but-announced, we still have to look at the official plans for this would-be Spanish tourist attraction and gawk. Paramount Park would have been one of the most unusual, odd, and – frankly – uninteresting major theme parks on Earth from the moment it opened. Wait strange, outdated, and mismatched stories awaited within this blatant copy of a Disney park? Let's find out. 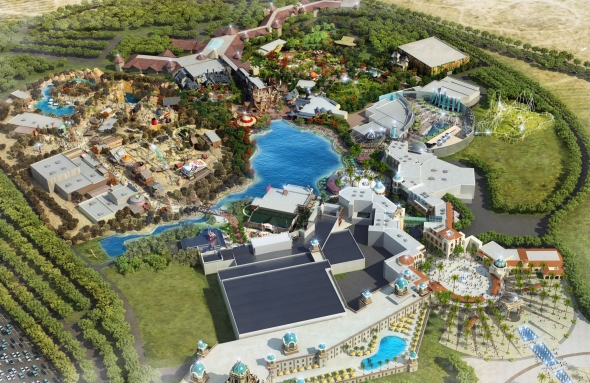 But what could we have expected to see in Paramount Park per its most current plans? To be frank: here you'll find an all-too-familiar formula. Physically, the park's set-up is straight out of Universal's Islands of Adventure: themed "islands" situated around a central lagoon, circumnavigated by an outer loop.

While the park's physical layout obviously follows the lead of Universal, the most shocking and off-putting element of the park is the actual contents of those lands. When encountered clockwise around the lagoon, they exactly and specificially mirror Disneyland's lands: adventure, frontier, fantasy, and future. The blatant and surprisingly straightforward "borrowing" of Disney's lands would initially be odd enough. But in this most unusual park, those themed lands are stuffed with Paramount's unusual collection of intellectual property.

In other words, we might imagine that in an ideal world, the park's designers working closely with Paramount would choose the best of Paramount's vast intellectual property library and craft cinematic themed lands around them. Quite the contrary, designers appear to have rigidly selected Disney's go-to lands and shoehorned in whichever of Paramount's properties would make any modicum of sense in each, regardless of their popularity or quality.

Alain Littaye of Disney and More has the details, and we’ll summarize what we know here.

A mix of Downtown Disney and familiar entry lands, Paseo Paramount will be a larger-than-life avenue of shops and restaurants with more grandeur than most park’s opening lands tend to convey. Following in the DisneySea route, expect that this plaza's grand scale will largely be thanks to an embedded Paramount Park Hotel adding height, depth, and grandeur... plus an exclusive park entrance for hotel guests. 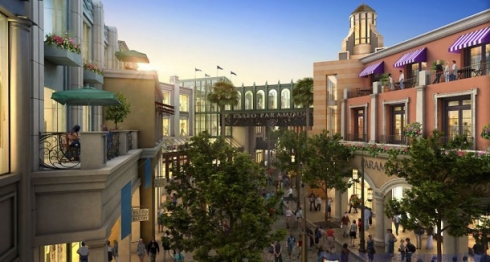 It will empty into a “hub” on the edge of the lagoon. While this proposed Paramount Park certainly borrows heavily from Disney's tried-and-true formula, this new take on "Main Street" is certainly not timeless. Rather, Paseo Paramount is supposed to come across as modern and thriving, with pulsating fountains dancing to modern music and the cutting edge "Paramount Live" amphitheatre bringing the studio's films to life. 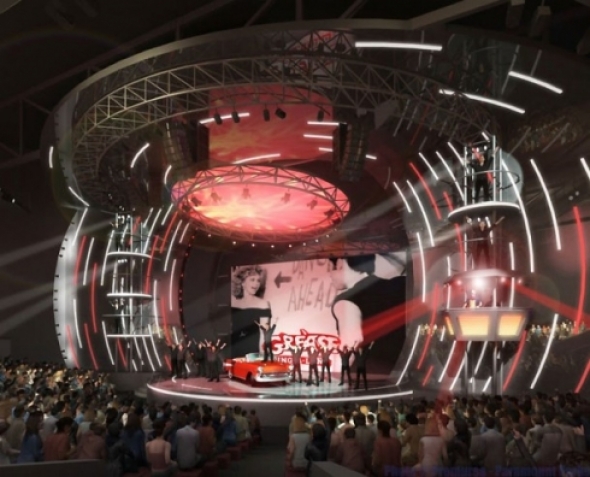 Taking another queue from Disney's classic park layout, guests emptying into the "hub" at the end of Paseo Paramount will find familiar motifs in familiar places: Adventure City to the left and Plaza Futura to the right, very closely mirroring the placement of Disney's Adventureland and Tomorrowland. 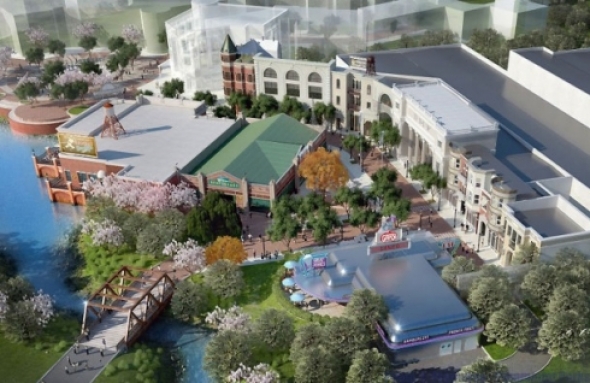 Despite the similarities to the name and placement of Disney’s Adventureland, Adventure City will not be set in an exotic jungle. In fact, it’s the beginning of the odd choice of intellectual properties selected for this park, each seemingly forced into nonsensical nooks and crannies. Especially here in this all-encompassing "Adventure City," all bets are off as time periods, genres, and films collide. 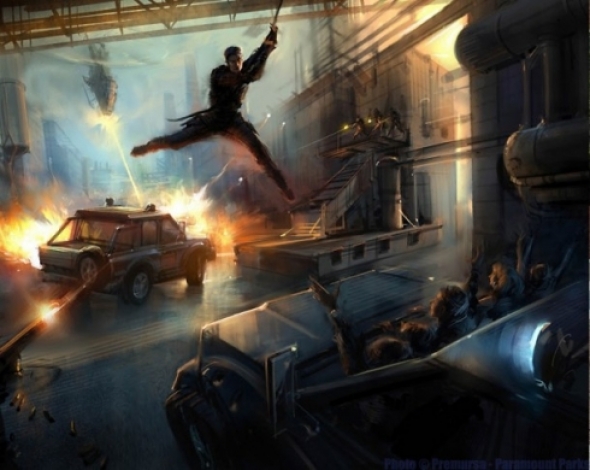 The land’s major draw (and probably the biggest draw at the park) will be a ride based on Mission: Impossible, seemingly using the technology behind Universal’s Amazing Adventures of Spider-Man and Transformer: The Ride – 3D. Is Mission: Impossible really the most engrossing and worthwhile action film in Paramount's extensive library? Perhaps it is... 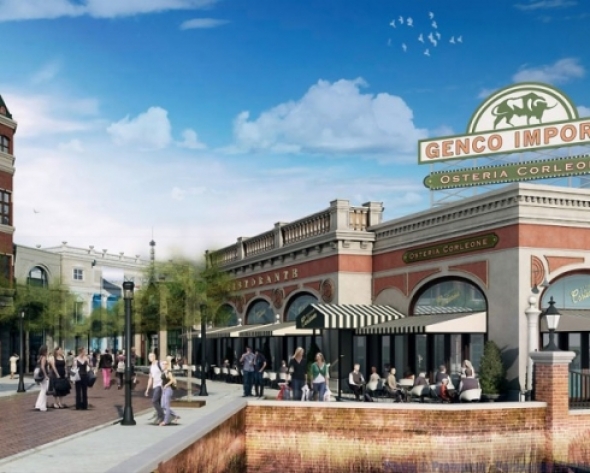 Otherwise, the land will very oddly contain a bumper cars attraction and an associated quick-service diner based on Grease, and a recreation of the iconic Osteria Corleone restaurant from The Godfather. The unusual juxtaposition continues. 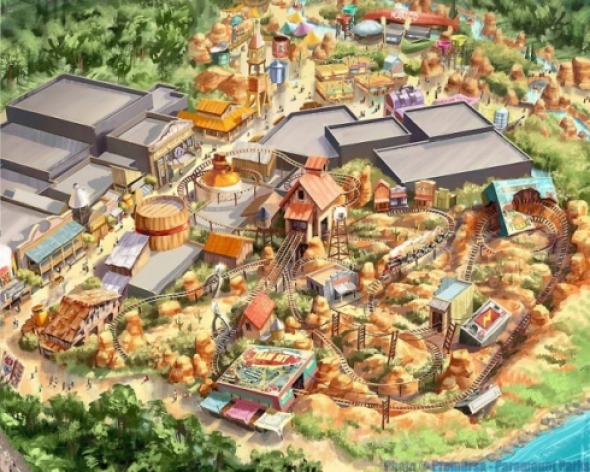 Filling the conceptual role and physical plot occupied by Disney’s Frontierland is Rango’s West, based on the 2011 film by Gore Verbinski and starring Johnny Depp as a pet chameleon lost in the Mojave Desert. The film performed alright at the box-office and was critically well-received, but seems to have about as much pop culture influence as Avatar... and at least Avatar has sequels on the way.

Essentially merging the concepts of Frontierland with Disney's "a bug's land" or Toy Story Playland, the idea is that you're shrunk down to the size of a chameleon in an Old West city made up of disgarded objects, all centered around a character that most families probably couldn't pick out of a line-up. Rango isn't a very strong intellectual property to begin with, but it seems that in order to have a "frontier" themed land (which, obviously, they have to have), it was the most worthwhile option in Paramount's library?

The land will include a family mine train roller coaster named Spirit of the West, and Rango’s Rootin’ Tootin’ 4D Spectacular, where Rango will narrate a collection of film splices that will include Paramount’s vast catalogue of classic Western films. There's also Rango’s Ragin’ Rapids ride. 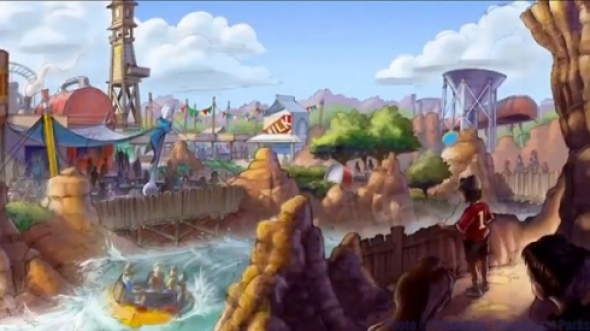 The whole land will be set among a larger-than-life world where buildings are made of moonshine jugs and discarded barrels. While it’ll be an impressive looking area, we can’t help but wonder if Rango is really the best example of a Western that the park’s design team could find to incorporate? It may have been a worthwhile risk during the park’s 2010 planning and announcement when the opportunity for synergy was ripe, but at this point, is Rango worth having at all?

But it gets stranger... Our tour around the would-be Paramount Park continues in the park's warped and dark version of an outdated Fantasyland. Read on...

As I live in the region they're planning this I just wanted to say it's "Murcia", not Murica.
But ultimately it'll be very interesting to see how this plays out.