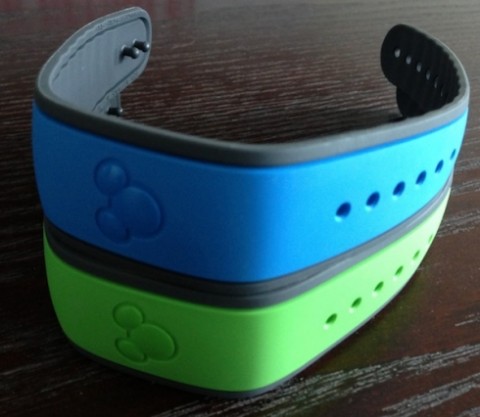 Are we having a magical experience yet? The newest MyMagic+ caveat has fans steamed. For the better part of a year, Disney has been trying to unroll MyMagic+ as the “next generation” of customer experience, meeting lots of technical difficulties and guest distaste along the way. But something in the newest test-and-adjust phase is pulling the pixie dust right out of fans.

The Fastpass we knew and loved is gone for good at Walt Disney World (despite fan outcry), where paper return tickets are a thing of the past. The new system, Fastpass+ was met with cool reception upon its announcement. Fans asserted that pre-booking Fastpass attractions days, weeks, even months in advance was much less of a benefit than the resort let on, instead sapping spontenaeity. Now, they’re about to get even angrier.

Fastpass+ relies on a few policies and regulations that the legacy Fastpass system didn’t. All are testing and adjusting to find the right balance, but the successive introduction of each has limited the usefulness of Fastpass+ to some guests and caused an uproar among fans, ending in this week's announcement of most restrictive rules yet (see number 7, below). Here we list the 7 changes (both good and bad, some both) that Fastpass+ has brought to the table, in order of their introduction. 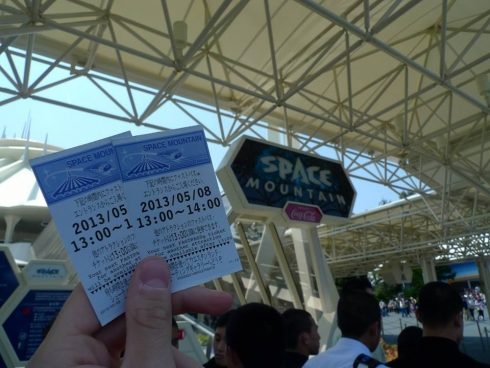 Park fans learned early on that Disney’s de facto policy for Fastpass was to accept returns any time after the return window started. Those “in the know” would spending mornings jumping from attraction to attraction, hoarding Fastpasses with early morning return times until late evening when the parks become busy. Doing so would unintentionally throw off the entire highly-measured, calibrated Fastpass system and make the waits longer for everyone involved. By officially restricting returns to the window, the system became much more technically adept, but some fans fumed. 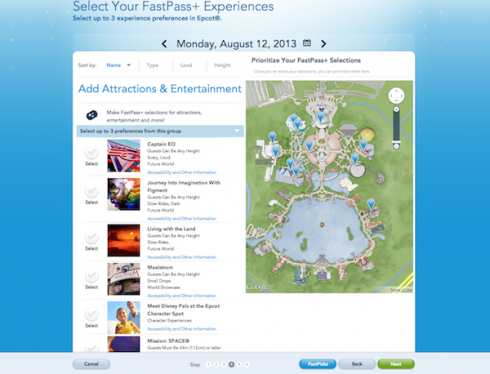 Attractions not part of the legacy Fastpass are options in Fastpass+.

Most Walt Disney World parks only offered Fastpass on four or five major attractions. With guests now being able (and indeed, encouraged) to pre-book Fastpass slots days, weeks, even months in advance, those attractions would quickly sell out, leaving nothing for same-day visitors. By offering Fastpass+ at meet-and-greets, shows, and attractions that never had legacy Fastpass, those many pre-bookings can be spread out.

Legacy Fastpass relied on the assumption that not everyone would use Fastpass (for any number of reasons) and even more people wouldn’t use it with the skill and precision Disney fans had mastered. Fastpass+ builds virtual-queueing into the trip planning just like choosing a hotel. The assumption is that near 100% of visitors would participate in Fastpass+ to its fullest extent, necessitating across-the-board limits of three attractions per day (four at the Magic Kingdom) that can be booked, period. (That's not to say everyone will plan well, though.) A necessary evil, for sure, but one that left Disney fans asking, “Was there really enough wrong with the old Fastpass that we needed to replace it with this?" 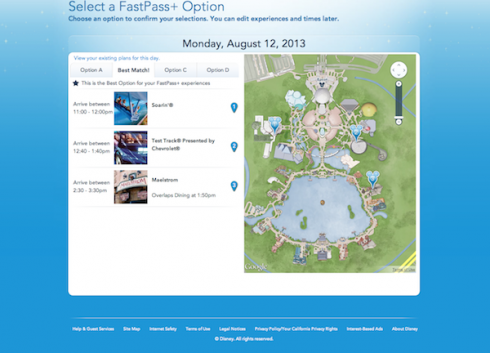 Without specifying tiers or limits, guests using My Disney Experience to book Fastpass+ reservations are offered ride combinations with only one tier 1 attraction.

On top of the limit of three (or four) attraction bookings per day, each park had its Fastpass+ offerings grouped into tiers. At Epcot, for example, guests can choose any one attraction in “tier one” and any two attractions in tier two, with tier one obviously containing more in-demand experiences. This caveat may have hit fans the hardest, as they know from experience which attractions garner long waits, high demand, and the best experiences... and can now choose only one of them. Again, absolutely a necessary policy... But one that hurts fans who had mastered the old system.

As it is, only guests staying at Walt Disney World resort hotels have the benefit of making Fastpass+ reservations up to two months in advance. Anyone staying off-property or locals have to make their reservations the day-of at new MyMagic+ kiosks scattered around the parks (which, themselves, have garnered very long lines as people rush to them to make a full day’s reservations first thing in the morning as the system requires). Once more, locals and ardent fans who save money by not staying at Walt Disney World hotels miss out.

6. Benefits for big-spenders? Maybe one day...

Fastpass+ is still testing and adjusting, even as it rolls out to all four Walt Disney World parks this month. But fans are already troubled by rumors and whispers of the direction that the program could go. Rumors swirl that, once guests begin to understand the very complex system of reservations and tiers and limits, new policies could appear. For example, guests staying in one of Disney’s ultra-expensive Deluxe resort hotels may find themselves with five options per day, with two or three experiences from tier one. Meanwhile, guests at value hotels may log in to see that they only get two Fastpass+ bookings... None of it has happened yet, but you can see the benefit Disney would percieve in this system...

Did a Walt Disney World annual pass just lose value? Via Inside the Magic.

Just announced today, those with Disney’s ultra-expensive annual passes are about to find their planning duties doubled. After having access to legacy paper Fastpass (and indeed, mastering the system and benefiting tremendously from it), guests with annual passes are (as of now) limited in their Fastpass+ inclusion by the amount of time they can spend planning.

Annual passholders can hold only seven days of Fastpass+ reservations at any given time. Once they use a day, they get one back in a constantly re-loading process. It's obviously meant to ensure that Fastpass+ users don't book up 60 full days of reservations so they can come when they want. (A similar issue forced the institution of dinner cancellation charges after guests would make more than one dinner reservation then play by ear to see which they ended up at, leaving tables empty and staffing off.)

Guests who have paid between $600 and $900 for Disney World's tiered annual passes, then, may find themselves doing their homework every night as they plan a week out after a day at the parks. It's just the icing on the cake in terms of Fastpass+'s confusing caveats and a serious eyeroll for the folks who paid the most for their admission and frequent the park most often. (Thanks to Westcoaster for breaking this news.)

Disney’s Fastpass (and it’s successor, the current Fastpass+) was a novel idea when introduced – a virtual queueing system included with park admission. Most all theme park operators have since begun their own queue-jumping or virtual-queueing systems, but always at a premium price. Fastpass+ continues to be included with admission, but is policed under a complex set of rules and technological boundaries that, so far, are not simplifying the process of planning or enjoying a Walt Disney World vacation for many people.

Fastpass+ (and all of MyMagic+) are still in test-and-adjust mode even as they become available to all visitors and entirely replace the old Fastpass system, so any and all of the seven rules above may change at any time. As it is, what do you think? Can you see the benefit of Fastpass+ in the short or long-term? Have you used it? What did you think?

I absolutely love the idea of fastpass + it's very clever and can add a real personal touch to disneys already amazing customer service and it's certainly simplifying some processes, however I think if Disney simply removed the pre book phase and just made fastpass + an on the day thing it would far improve it that way everyone would be in the same boat, I can assure you no one has ever said in the park "I wish I could have booked my fastpass months ago"!

Not all visitor staying on site have the option to pre book fastpass+ I live in the uk and as so do not receive park tickets till check in this and Emh were the reason I booked to stay at disney........ Unfair!

dot if you're staying on site, you can book fast passes 60 days ahead. go to the disney website, sign up for my disney experience, your reservation/tickets should show up. if not, call disney asap and they'll help you straighten it out.

Not all visitor staying on site have the option to pre book fastpass+ I live in the uk and as so do not receive park tickets till check in this and Emh were the reason I booked to stay at disney........ Unfair!

I live in the uk too and managed to customise magic bands , books fast passes and dining reservations.

You just sync all your details onto the my Disney experience we page or app.