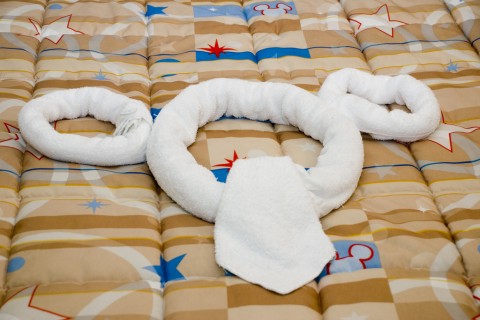 The Hosts and Hostesses in Walt Disney World's Housekeeping department play an important but largely hidden role in making your stay at Disney resorts a comfortable and happy one. You may give little thought to the part they play - but some of the little tricks and neat touches that they employ can help elevate a good vacation to a great one.

Amy Ziese worked as a Housekeeping Cast Member at Disney's Wilderness Lodge, Disney's Fort Wilderness Resort and Campground and Disney's Grand Floridian Resort from May 2005 to January 2006 as part of Disney's College Program. The Wilderness Lodge was her home resort, but she was frequently deployed for a week or two at a time to the other resorts when extra staffing was needed in those locations.

Amy was kind enough to speak with Theme Park Tourist about her experiences during that time - and you can read her thoughts below. 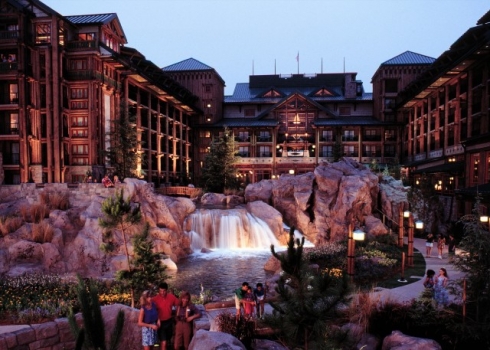 Amy heard about the College Program through a cousin who applied, but later decided not to attend. "I attended a recruiting seminar at Indiana University Indianapolis, which was heavily advertising on campus."

Her interview for the role immediately followed the recruiting seminar: "We were interviewed two at a time. Since I was applying for the College Program and not a traditional job, many questions pertained to the lifestyle of CPs. We were asked if we thought we would be able to adjust to life so far from home, how we got along with strangers, and if we would be comfortable sharing an apartment with several other roommates."

"At the time of the interview, we didn’t know what role we would be offered. I requested housekeeping and was later offered the role that I wanted. However, many applicants to the College Program were not offered the roles that they requested. When the acceptance letter comes for College Program, you’re only offered one job and you must accept or decline the entire program under the understanding that you agree to work in that position. You don't find out what your location will be until you’ve arrived for your program."

Training to be a Housekeeper

Amy's training for her new role was a mix of generic Disney training and Housekeeping-specific courses.

"The initial training for the role of housekeeper began with Traditions, which every Cast Member goes through. After that I attended a day-long class at Disney University that covered housekeeping procedures resort-wide. A few special classrooms are set up with hotel beds and bathrooms for trainees to practice on. After this, I went on to the specific training provided at my resort. This included several days of working with a trainer and helping her clean her rooms, while also learning the layout of the resort."

"I was later trained in additional housekeeping duties such as cleaning the lobby, which is a separate job that one or two housekeepers are assigned to for the day. I was also trained as a runner, which meant that I delivered mini fridges and other amenities to guest rooms upon request throughout the day. (Since that time, all resort rooms have been updated to include mini fridges so runners now have a much easier job and infinitely smaller items to deliver.)"

"When I was deployed to other resorts, I would receive training for a day or less on the specific procedures in that resort." 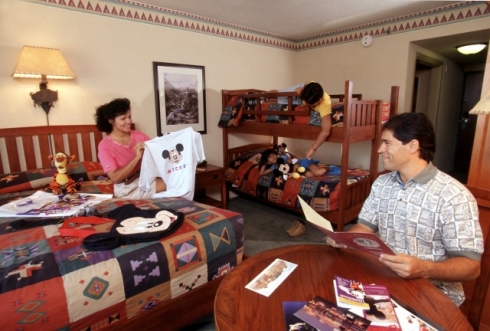 A room at Disney's Wilderness Lodge.

As a Housekeeper, Amy was assigned several rooms to clean each day. "Each room was either a check out which had to be turned over completely, or occupied so I only had to straighten up. Every day, the beds were made, bathrooms cleaned, and carpets vacuumed. In check outs, we obviously changed the sheets and towels, dusted, cleaned the coffee maker, changed the cups, and did a more thorough cleaning of the room. From time to time a check out was assigned a deep cleaning where the bedspreads were changed and the additional tasks performed. If a room was unoccupied for several days, we might also be assigned to clean up that room, which would just include a quick dusting and vacuuming to keep it looking fresh."

"When I was assigned to the lobby, I would follow a set rotation around the lobby area throughout the day to keep things neat. I cleaned up the bathrooms, kept the toilet paper and paper towels stocked, and emptied trash cans. The rotation also included a once daily cleaning of Artist’s Point in the morning and the Cub’s Den kids’ area."

"At the lodge we had to clean 17 or 18 rooms a day. At Fort Wilderness we had 10 cabins, each one with a living room, kitchen, bathroom, and bedroom. At the Grand Floridian we had 10 rooms. The number was fewer there because we were expected to change all the sheets on all the beds every day. The rooms were also marginally bigger."

Well - I finally learned The Wisdom of goodies-expectations the hard way, and here it is : It only works when you aren't expecting it : ) I've gone in feeling entitled, and it doesn't work. But I have figured out how to get Miss Mousekeeper's attention : I mess with her back! When she gets there, Panda is still sleeping peacefully with Merida, Hello Kitty is already playing solitaire, and Pal Mickey is on page 32 of "Act Like A Lady -Think Like A Man". Over the years she has hidden my toothbrush in a potted plant, coloured in a whole picture in the colouring book, tied a pirate bandana around Cat In The Hats chapeau, replaced a missing pair of earrings with MUCH nicer ones, and actually sent my birthday dress to the COSTUME department to fix the broken zipper. I always tip Mousekeeping - And I leave her little presents and surprises, too : ) Panda always writes the note, in Big Round letters, "Deer Mousekeepers, tankoo so much, and pleeze bring Chopstix!" And they *do* :D

I'll have my first on-site stay at Disney in less than two months. After reading this, I'll make sure to tip daily. I do hope that what I read about towel animals no longer being made is just a rumor as I have never experienced these except on a NCL cruise and would love to see what Disney mousekeeping can do.

When we stayed at Caribbean beach in Feb, there was a circle mickey towel when we arrived but after that, NOTHING. I kept telling my friend what fun things they did with towels. NOTHING. and I tipped every day. It's funny how when you are expecting something small and don't see it, how you feel. I was actually let down and I'm 64.

My kids get so excited when they see towelgami in all of the room Windows as we walk back to our room daily, but they become so disappointed when we get back to our room and nothing is there. We leave daily tips (usually about $10 room), we put all of our towels in a pile in the tub, knot the trash bags and put new ones in the bin, and try to keep our room tidy, we even leave thank you notes. I feel like we are really good guests. Should we leave requests for towelgami? We've been to six resorts now and the only towelgami we get is at check in.