Use the Force, Mickey: What's Happening With Star Wars at Disney's Theme Parks? 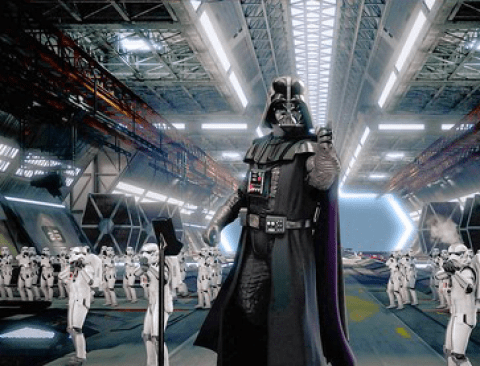 The world of Tomorrow set a long time ago in a galaxy far, far away? It’s possible to varying degrees, according to a lot of folks in the Disney Parks sphere.

Imagine, after all, Disneyland’s Tomorrowland. After an unsuccessful and quickly-reversed attempt to give the land Disneyland Paris’ Discoveryland style (with none of its substance) in 1998 that we discussed in Part One of this series, the land has been piecemeal returned to a color palate of silvers and blues leaving only a few glaringly gold structures. (Revisit Part One of this Tomorrowland discussion to see how Disneyland's Tomorrowland evolved to its current, odd form.)

And with an aging Innoventions, mismatched Star Tours and Buzz Lightyear, the Finding Nemo Submarine Voyage ride that just closed (maybe permanently) only seven years after a grand and celebrated re-opening, and congested paths bottlenecked by unused infrastructure and old aesthetic, rumors swirl that a New New Tomorrowland may be just around the corner.

Disneyland’s Tomorrowland may finally get the central thematic setting and story it lacks thanks to Disney’s $4 billion purchase of George Lucas’ self-named Lucasfim production company in 2012. Through the purchase, Disney controls the Star Wars film franchise, including its in-production sequels scheduled for release beginning in 2015 under the Disney banner.

Disney's collaboration with George Lucas - Star Tours - may be a sign of things to come. © Disney.

Rumors had accumulated since Disney’s acquisition that Star Wars would begin to play a more prominent role in Disney Parks, likely starting with a much-needed renovation to Disney’s Hollywood Studios in Florida. There, it was imagined that a full Star Wars land would expand around the existing Star Tours ride, creating a proper theater for the popular Jedi Training Academy show. As well, fans envisioned a themed restaurant based on the Mos Eisley Cantina from Star Wars Episode IV: A New Hope, and new, all-encompassing architecture to really place you into the films (something the era's "Studios" style parks famously lack, opting instead for soundstages and backdrops).

It’s no surprise that fans and Imagineers would dream big – Disney has seen firsthand the massive sales that accompany fully themed lands with exclusive merchandise and food offerings after Disney California Adventure’s Cars Land and, more painfully, nearby Wizarding World of Harry Potter and Universal Orlando where people actually queue for an hour just to get into a store – a theme park operator’s wildest dream.

Jedi Training Academy takes place on the rising stage of Tomorrowland Terrace at Disneyland, across from Star Tours. Image © Disney.

As tends to be the unfortunate case with Walt Disney World, rumors now suggest that a Star Wars Land at Hollywood Studios is on hold, although we still expect to see some movement by the end of the decade.

The plans, however, have migrated. Now, some sources are saying that a New Tomorrowland at Disneyland based on Star Wars is happening, even if cost overruns with Florida’s MyMagic+ program may have made decision-makers nervous, opting to open a New Tomorrowland in phases (like Magic Kingdom’s New Fantasyland) instead of an all-at-once grand opening like New Tomorrowland in 1998. 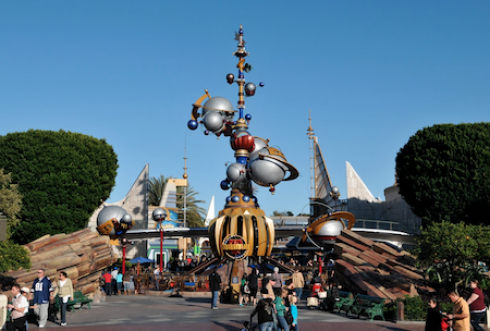 Disneyland's current Tomorrowland contains elements of 70's googie architecture, 1998's gold "Discoveryland" redo, and recent silver additions - the only Tomorrowland in the world not united under one style and story. Click for source.

What’s on the drawing board? No one’s absolutely sure. Nothing’s official, and even those “in the know” say plans change by the day.

Early reports suggested that first (and perhaps most importantly), a Star Wars overlay for Tomorrowland would bring about the much-needed cosmetic improvements. The land is still plagued by mis-matched architecture representing different ideologies and eras.

For example, the googie architecture of Space Mountain reflects in Tomorrowland Terrace across the way with pointed white spires and cones. The front of the land still features the original entry towers from Walt’s era – tall with geometric carved patterns that harken to chemicals and modern simplicity. That’s a stark contrast to the tall organic windsail towers flanking Walt’s originals, added in 1998. They surround the Da Vinci-style Astro Orbitor, which is in turn circled by organic Discoveryland rockwork. 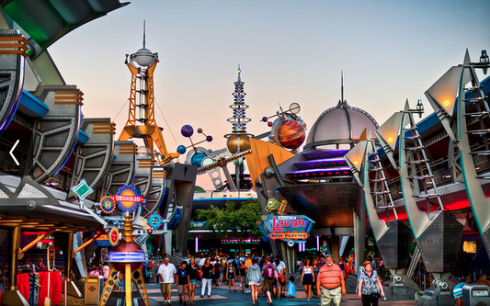 The first phase of a Star Wars based Tomorrowland would be to re-skin Tomorrowland’s main entry pathway. What “Star Wars style” specifically means, we can’t be sure. Likely, it would look something like Magic Kingdom’s Tomorrowland, more based in science-fiction pop culture than the current European fantasy Space Age mish-mash.

Meanwhile, the interior of the land would get the most of a Star Wars makeover. The unused Peoplemover / Rocket Rod tracks would finally be removed (despite a decade of fan outcry begging for the Peoplemover’s return, current ADA codes seem to be prohibitive, requiring wider openings, emergency exits, and wheelchair accessibility that the ride didn’t need before, grandfathered in from the 1960s). 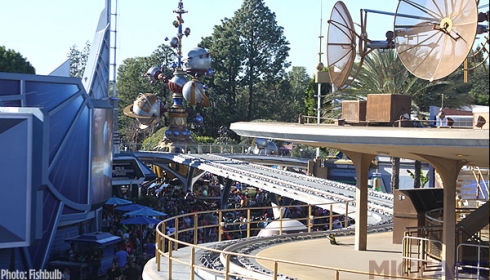 Micechat reports that the three story platform at the center of Tomorrowland (formerly Peoplemover loading and Rocket Jets) may become a Millennium Falcon walkthrough while the unused Peoplemover tracks would finally be removed. Image via Micechat.

At the land’s center is a three story circular platform. Originally, the Peoplemover / Rocket Rods were boarded on the second story, with the spinning Rocket Jets high up on the third. In 1998, the Rocket Jets were replaced with the Astro Orbitor at the land’s entrance. The skeleton of those rocket jets still sits on the third floor, unmoving, with the rockets replaced with sattelite dishes and the whole thing painted gold and green. Some reports say that this platform would become a walk-through of the Millennium Falcon. 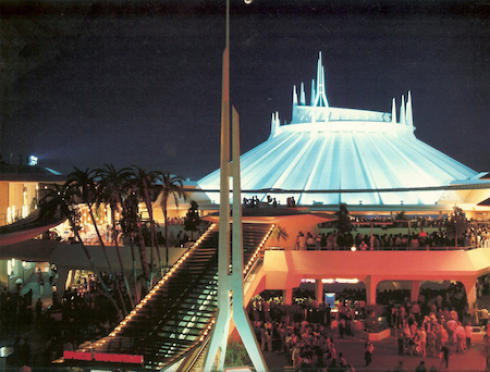 The elevated platform in front of Space Mountain (the roof of Captain EO's Magic Eye Theater) may be the new home for an elevated Astro Orbitor, freeing up the land's entry plaza. Click for source.

Space Mountain would likely stay the same except, perhaps, placing a new Rocket Jets or Astro Orbitor type ride on the platform in front of it. That platform also happens to be the roof of the Magic Eye Theater, currently showing Captain EO but likely to be replaced with a Star Wars 4D film or perhaps a “Yoda Encounter” similar to the Turtle Talk attractions across the world where fans could ask questions of a digital Yoda in real time. 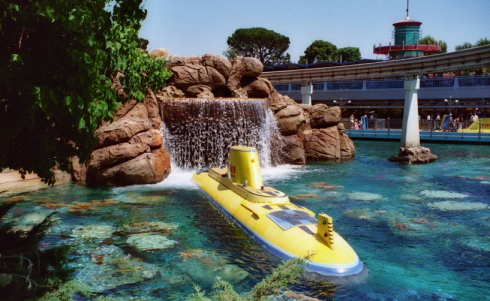 Disneyland's Submarine Voyage takes up a massive amount of real estate, and closed this January for a refurbishment that many are calling an excuse for a permanent closure. Click for source.

A huge amount of land in Tomorrowland is dedicated to the Submarine Voyage and the park’s massive and winding Autopia (which is almost entirely located on the Submarine Voyage show building’s roof). Removing both would open a wide area of land, likely to be used for a high-speed thrill ride through the forested moon of Endor, home to the furry Ewok race.

The park’s Innoventions located in the slowly-turning Carousel Theatre (that once housed the Carousel of Progress) may make way for a station for the Endor thrill ride. I can also imagine it being a more proper theatre for the Jedi Training Academy or a new Star Wars show.

A Lot of Questions 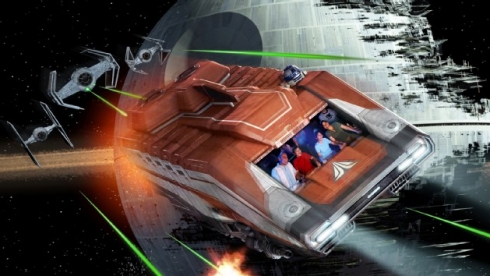 But what do you think? Star Wars has certainly proven its longevity in the film world – can it translate to an entire theme park land? What’s more, Disneyland Park has no land based on an intellectual property (like Toy Story Land). Should Star Wars be the first?

What precedent does it set to apply Star Wars to Walt’s original Tomorrowland? What about a Lone Ranger Frontierland or an Adventureland entirely based on Indiana Jones? How much is too much? And if the entire land is based on Star Wars, what about Buzz Lightyear and Space Mountain? Will they just be odd man out? What about folks who don’t like Star Wars?

There’s much to consider in this possible refurbishment to Disneyland’s Tomorrowland. There’s no question that “Star Wars Land” will get quite a bit of marketing notice – more, at least, than just “New Tomorrowland” and executive’s mouths have got to be watering at the thought of lines to build and buy Lightsabers and big bucks to buy Mos Eisley Cantina food.

So tell us – what do you think?

I think Disney should bring back Tomorrowland 2055 and bring back the Adventures Thru Inner Space ride.