In Photos: Holiday 2013 Activities at the Universal Orlando Resort 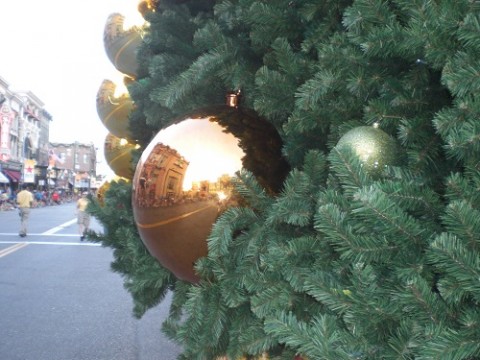 Christmas at Universal Studios promises to be an unforgettable affair.

While Disney began their holiday celebration promptly after Halloween with their first Christmas party booked for November 8, Universal has opted to wait for a much more reasonable onset of holiday cheer. The festivities at Universal Studios Florida began December 7, and include all the classic activities that fans have come to know and love in Universal Studios and Islands of Adventure. 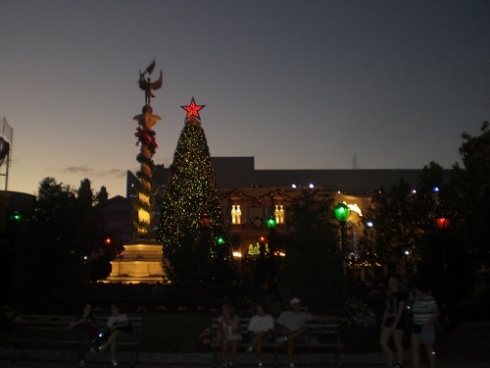 The highlight of the holiday season at Universal is the Macy’s Holiday Parade. If you wait anxiously to see the famous Macy’s Thanksgiving Day Parade on television each year, this is your chance to get a taste of that event live and in person. 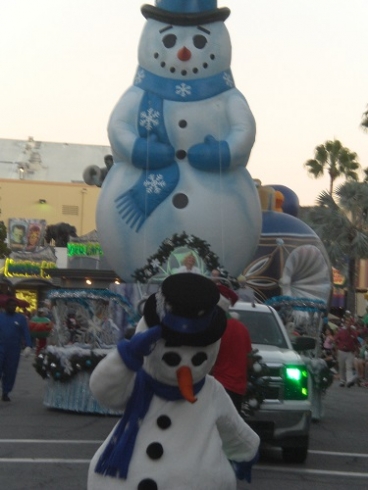 The Macy’s Holiday Parade at Universal Studios features many of the same giant floats that grace the streets of New York. These masterpieces can exceed their one day lifespan by making the trip to Universal where they’re featured in daily parades for almost a month. 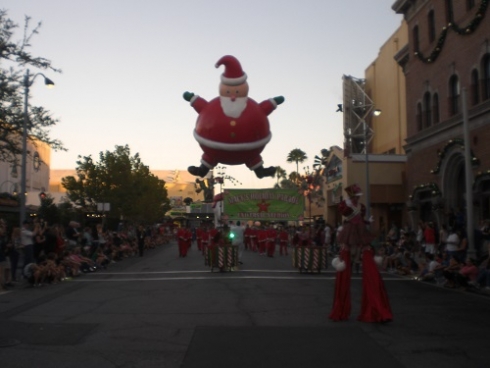 In addition to the giant floats that bob and weave through the streets of the park, this parade is also filled with dancers, stilt walkers, floats, and those beguiling candy cane ladies. 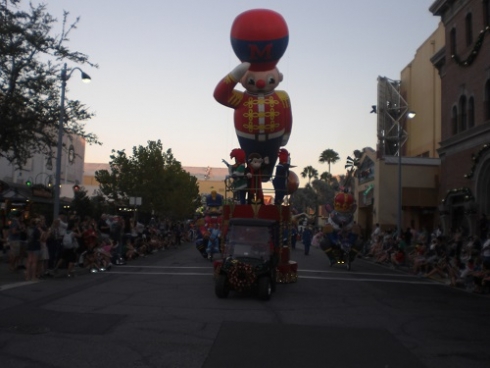 Bringing up the rear is the grand finale – Santa Claus himself! If you’re looking for a stellar spot to catch the festivities from, park yourself somewhere that has a good view of the tree, near Twister. At the end of the parade a special tree lighting ceremony takes place that you won’t want to miss. 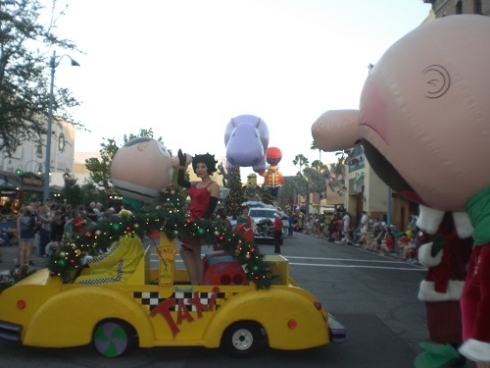 If you’re headed to Universal this holiday season, you can catch the Macy’s Holiday Parade at the following times: 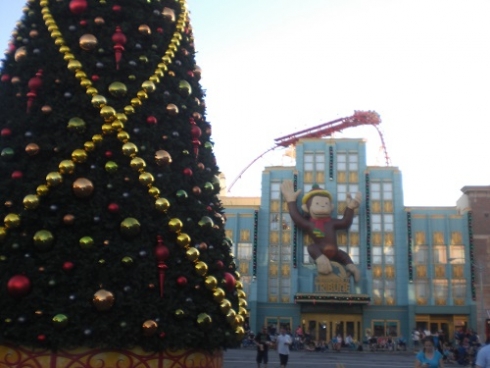 If you have other plans during the parade but still want a taste of the oversized floats, never fear! Many of the floats remain on display throughout the park all day long, such as the giant Shrek overlooking the Universal Studios Store, or Curious George climbing the Metropolis Tribune building. 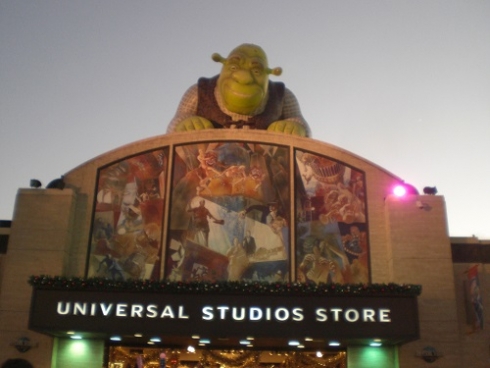 Special Holiday shows add to the fun at Universal Studios. Mannheim Steamroller performs live on select weekends throughout the month with concerts on the 7, 8, 14, 15, 21, and 22 at 6pm. Unlike Disney where holiday festivities like these would come with a separate ticket, all concerts and shows are included with your ticket price at Universal. 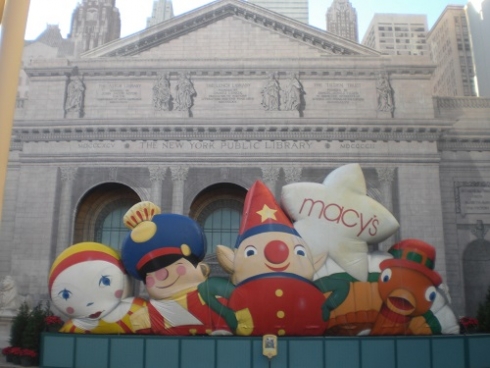 Some of the standard shows in the park get a holiday overlay as well. A Day in the Park with Barney becomes A Barney Holiday. The Blues Brothers Holiday Show replaces the standard street show with renditions of “Santa Claus is Coming to Town,” and “Blue Christmas” among others.

Not to be outdone, Islands of Adventure is getting in on the holiday fun as well with Grinchmas. While you’ll spot some holiday cheer here and there throughout the park, the real excitement is centered around Seuss Landing in Islands. Simply strolling down the street can be an exciting experience here with wandering Who’s to spot meandering through the village.

While a version of the Grinch is available for meet and greets throughout the year, the Grinch that you can meet during the holidays is something altogether different. Replacing the fur character of the Grinch is a stunning face character – think Jim Carrey from the live movie. Yellow eyes, acidic attitude, furry face and all are ready to greet you in Seuss Landing for a rare photo op that you can only get one month out of the year. If you’re in the parks, this is something you don’t want to miss. 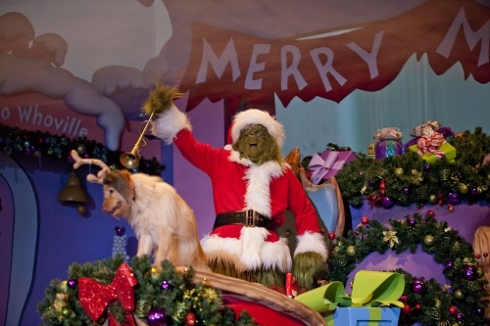 The Grinchmas Wholiday Spectacular is another must-see of the holiday season. The music is recorded by Mannheim Steamroller and a full live complement of Who’s perform the story live on stage. Check your map for show times as they vary daily, and make sure you show up early so you can grab a great seat for the show. 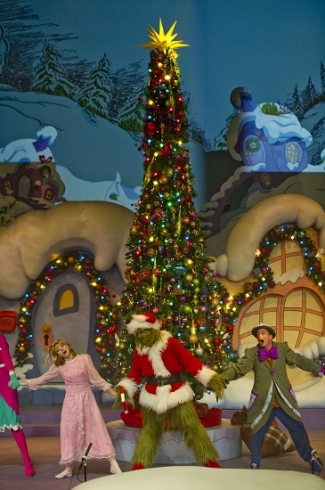 If this just isn’t enough Grinchmas for you, you can also grab breakfast with the Grinch and his friends in Circus McGurkus Café Stoo-pendous on select days. The meal is hosted by the Grinch himself. This is one of those rare holiday delights not included in your standard ticket, however. The meal is $24.99 for adults and $10.99 for children. Reservations are strongly recommended in advance to guarantee a spot at the Grinch’s table. Meals take place at 8, 9, and 10am from December 7 through the 25, and on the 31. An extra 7am meal time is added from December 26 through December 30.

Finally, if you’re looking for some Christmas magic outside the parks, you can take part in one of several special events at the Universal resorts. You can meet Santa at the Lowes Portofino Bay Hotel as part of Holiday in the Harbor on the 6, 7, 13, 14, and 20-24. Santa also shows up every Friday in December through the 20 at the Hard Rock Hotel as part of Holidays in the Kitchen. Lowes Royal Pacific Resort hosts ornament and stocking decorating, cookie decorating, and pastry chef demonstrations on select days throughout the month.

If you’re going to be at Universal on Christmas, you can enjoy several special meals, including:

Staying through New Years? Each of these three resorts hosts a special event for New Years as well. Lowes Royal Pacific Resort has a New Year’s Eve Dinner and Dessert Reception. The Hard Rock Hotel will have a New Year’s Eve Holiday Buffet and Lobby Party complete with champagne toast, balloon drop, and confetti cannons at midnight. At Lowes Portofino Bay Hotel, you can enjoy the New Year’s Eve Party in the Piazza. This ticketed event features complimentary wine and food stations as well as special activities for the kids.

Though they’re not the first to get in on the holiday action in Orlando, the Universal parks make sure that visitors get a full helping of holiday cheer this month.