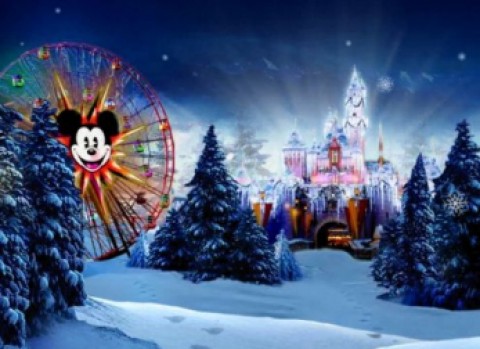 Oh, the weather outside's delightful... Wait, that's not right. But what else can you expect from Disneyland Resort, where an 80-degree Halloween season leads into a similarly warm build up to Christmas. That hasn't stopped the Californian pair of parks from wrapping up more holiday offerings than ever as the newly transformed Disney California Adventure gets its first real taste of the holidays and as the original Disneyland Park's holiday attractions roster continues to grow.

This year, Disneyland continues its annual streak of transforming already beloved rides, shows, and attractions into distinctly jolly versions of their usual selves (having just returned Space Mountain: Ghost Galaxy to it's fright-free self). Here are a few of the offerings unique to the Disneyland Resort and only available during this special time of year.

In New Orleans Square, the stately white plantation house of the Haunted Mansion is decked out in garlands, wreaths, and twisted snowmen. There's a reason for it, as Jack and Sally from Nightmare Before Christmas have taken over. Haunted Mansion Holiday is a very special take on the classic attraction as it's entirely inhabited from porch to graveyard by characters from Halloweentown. It really is a whole new ride.

Briefly renamed Sleeping Beauty's Winter Castle, the fairytale spires of Disneyland's iconic landmark light up with over 80,000 LED bulbs. The idea is that the castle has been frosted and frozen over with snow-capped turrets and sparkling icicles. "Believe... in Holiday Magic" replaces the park's normal fireworks show and "A Christmas Fantasy Parade" joins together Santa and classic Disney characters. 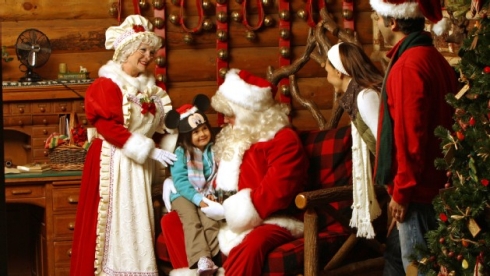 In Frontierland at the Big Thunder Ranch, the Jingle Jangle Jamboree is a sort of all-day-long party where kids can meet-and-greet with Pluto (in a pair of not-so-convincing reindeer antlers) and compete in holiday-themed bag tosses, races, and holiday Plinko. Meanwhile, the petting zoo is still stocked with goats (here, "the goats of Christmas past") to meet. The Ranch's festive log cabin in the place to meet Santa and Mrs. Claus. This sort of low-key, family-friendly activity is what's kept a visit to Disneyland as a holiday tradition for tens of thousands of local families. 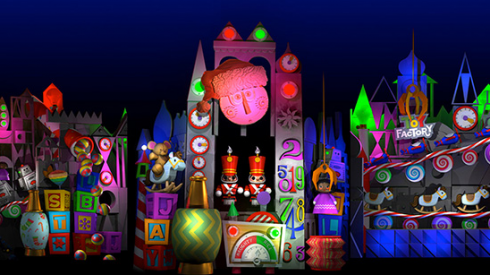 In Fantasyland, it's a small world holiday turns the classic boat ride into a celebration of international proportions as the knee-high cast sings for peace on earth. This year, the exterior of the attraction will also use new 3D texture mapping technology to create dancing gingerbread men and other holiday shennanigans every night as a Holiday Clock Show. 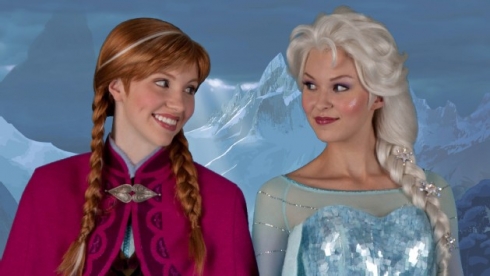 Nearby, Ana and Elsa from Frozen have their own snowy corner of Fantasyland where they meet-and-greet along with a sleepy animatronic Olaf, the sleepy snowman from the film that debuted on Thanksgiving Day. (They'll also be meeting fans at Epcot's Norway pavilion at Walt Disney World.)

Fan image via Inside The Magic. Click for source.

The talk of the town was the park's new Jingle Cruise (an overlay that's also in place at Walt Disney World's Magic Kingdom) in which the Jungle Cruise skippers will get nostalgic for the holidays and decide to celebrate by decorating their boathouse and telling holiday jokes. Don't let the photo above fool you - it's the skippers who are celebrating and not the animals, so don't expect an elf hat anywhere in sight. Rather, Jingle Cruise is a low-key overlay that's simply injected a few holiday punchlines into the classic ride. 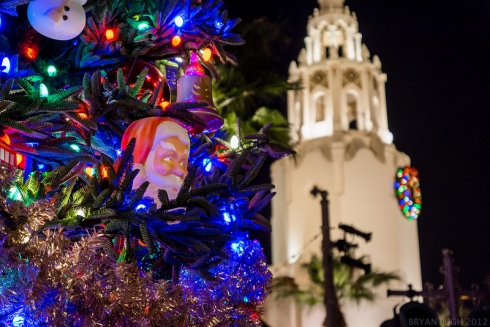 Disney California Adventure park across the plaza is getting its first full taste of the holiday season after 2012's grand re-opening, adding an assortment of new holiday celebrations. Buena Vista Street - the park's new 1930's Los Angeles entry land - is decked out in classic lights and decorations that harken to the Christmas celebrations of the last century. All too appropriately, Santa meet-and-greets at Disney California Adventure inside the regal Elias & Company department store. (Isn't meeting Santa at the department store a family tradition for many?) 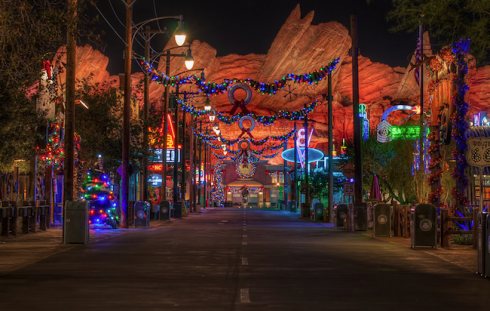 Meanwhile, Radiator Springs in Cars Land is also ready for the holidays. As expected, there are Christmas trees made of tires, safety cones, and road signs, "snow cars," and other seasonal touches to make the most beautiful land in any American Disney park even more awe-inspiring.

Just for the season, the park's World of Color water and projection show becomes World of Color: Winter Dreams, an entirely new show with a cast of snowy creatures from Frozen and the Toy Story characters with a telling of "The Nutcracker." The show features original songs and animation as well as classic Christmas tunes, and has been overwhelmingly adored by park visitors, some ranking it as high as the original World of Color! 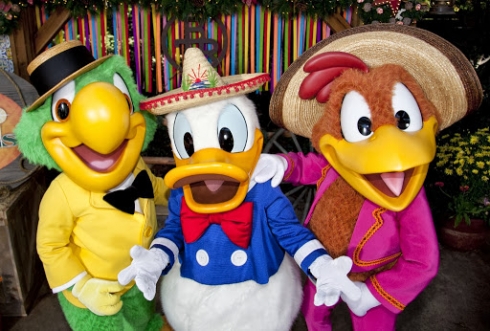 The park is also calling on the region's Latin American roots for a celebration called Viva Navidad! taking place at the park's Paradise Gardens and surrounding. A sort of street party with a twist, the event features Latin American food, celebrations of Three Kings Day, mariachi bands, 12-foot puppets of Santa and Mrs. Claus, and meet-and-greets with Disney's Three Caballeros (led by Donald Duck) that have been tremendously well-recieved.

Why does Disneyland get all the holiday love while Walt Disney World's parks celebrate with far fewer decorations and attraction overlays? In short, most of Walt Disney World's visitors are from far away and only make it to the parks once every few years, if not once in a lifetime. If you only have one trip to a Disney Park, you want to see the real Haunted Mansion or Space Mountain, and you want to be able to take pictures of Main Street without too much holiday clutter in the way. (Still, you can read our write up on Walt Disney World's holiday offerings here!)

Disneyland is just the opposite, drawing most of its visitors from Southern California and surrounding states. They love holiday overlays of their favorite attractions, and want to see special, limited-time offerings of the rides they grew up riding multiple times a month. A huge number of Disneyland visitors have annual passes, so if they don't like Jack and Sally in their Haunted Mansion, they can just come back next month!

Holidays at the Disneyland Resort officially runs from November 12 - January 6, though many of the offerings mentioned here are already gearing up a week ahead of time. If you've been to Disneyland during this special time, what's your favorite limited time offering? If you haven't which sounds the best, or which do you wish you could see at Walt Disney World?