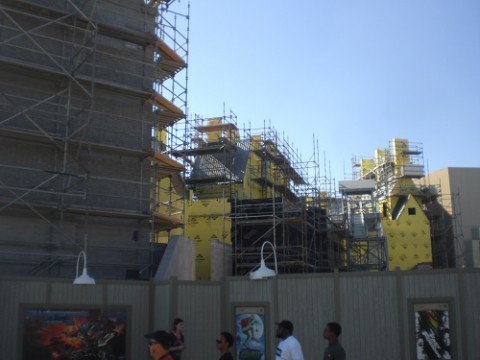 With Harry Potter construction in full swing and a new resort on the way, there's much to anticipate at the Universal Orlando Resort.

The Harry Potter expansion first announced in May 2013 is well underway over at Universal Studios with towering evidence of what’s to come. The skyline of what was once the quaint town of Amity has been completely overtaken by the craggy skyline of what will become Diagon Alley. The buildings are taking very distinct shapes and it’s clear that this expansion will feature the same distinctive architecture you can find over in Hogsmeade at Islands of Adventure. Steeply peaked roofs and multistoried constructions seem to be the norm for wizarding folk, though we can’t yet tell if this part of the world will take on the same snowy look as Hogsmeade. 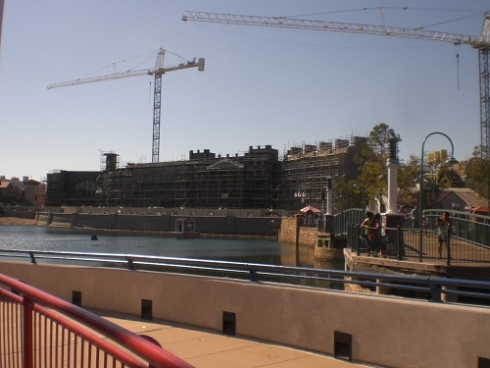 One of the most distinctive features of the construction project to date is the train station. Always identifiable, this structure is even easier to pick out now that windows are going in and the enclosure is nearing completion. As you may have seen previously, the Hogwarts Express is already on the track. This train will connect the Diagon Alley section of the Wizarding World of Harry Potter to the existing Hogsmeade construction over in Islands of Adventure. 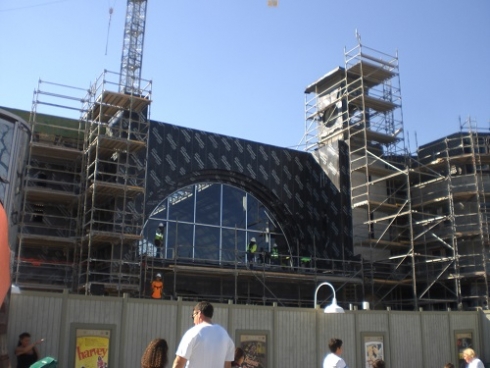 From the front, the Diagon Alley expansion so far has a very solid look to it. Aerial photographs available from WESH.com show that what little open space there is tends to be behind the tall façade. This is in line with the theming of the area. For novices to the Wizarding World, Diagon Alley is a secret wizarding area that’s inaccessible to muggles, or non-magic folk. Wizards enter by tapping the appropriate brick in a back alley of London and travelling through the archway that opens up for them. Though the experience will obviously need to be scaled up to accommodate the number of visitors that this Diagon Alley will see, a similar experience is promised which may indicate that there’s a very specific entry point for Diagon Alley that you’ll find somewhere along the façade of London.

The construction on the front of the façade so far seems to be less showy and dramatic than what’s visible behind, lending further credence to the idea of a typical London street fronting this area with the mystical wizarding world concealed behind. Though most of the façade is fairly nondescript, the train station’s large arched windows stand out very distinctly. The train station of Harry Potter lore is perfectly ordinary on the King’s Cross side, which will be what this façade will represent. It’s only by running through the barrier between platforms 9 and 10 that wizards enter the more magical side of the station, known as platform 9 ¾.

The largest building in the Diagon Alley construction by far is not the train station, however, but the show building that will house the Gringotts Bank ride. This is rumored to be a roller coaster. Attractions Magazine released a photo of what appears to be a roller coaster car being loaded into the show building. This building was one of the first to appear on the site with construction beginning as soon as Jaws could be demolished. The exterior of the show building now appears to be complete save for cosmetic additions which will surely come later, and then only on the guest side. What’s taking place intside this building is surely an awe-inspiring transformation, but guests will need to wait quite a while to find out what waits for them here.

Also scheduled to appear in the area are several shops and The Leaky Cauldron restaurant. Wizard Wheezes is confirmed for the area. Other shops are still in speculation only...our recent article covered what's been confirmed for The Wizarding World of Harry Potter - Diagon Alley.

The other major construction project going on at Universal Studios Orlando is the resort’s fourth hotel. The Cabana Bay Beach Resort is already accepting reservations for spring of 2014. Unlike the pricey options currently available, this hotel is designed for affordability. Moderate and value priced rooms will make it possible for anyone to enjoy a room on property. This resort will also go a long way toward helping Universal handle the inevitable inflow of guests who will show up for the opening of the Harry Potter expansion. 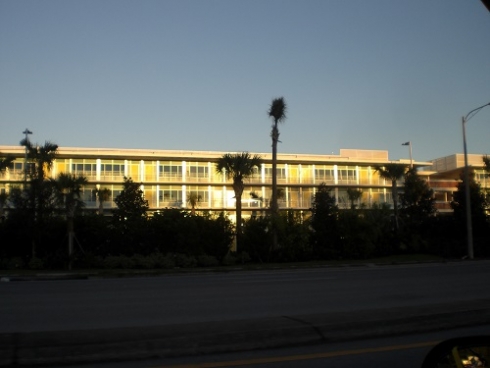 The Cabana Bay Beach Resort is a blast from the past with rooms modeled after roadside motels of the 50’s and 60’s. These rooms are eye-catching to say the least with colors that positively pop. Bright aqua, lime green, lemon yellow, and sunny orange adorn the rooms. Paired with geometric prints and minimalist furniture styles, this gives the hotel a look that’s distinctly unlike the other resorts on property.

On-property recreation at Cabana Bay will include a zero-entry pool with a dive tower waterslide, pool bar, and kids play area. A second pool scheduled to open later in the summer will include a sand beach, lazy river, waterfalls, and cannons. If you’re not one for water activities, a 10-lane bowling alley, arcade, and fitness studio will be on hand to occupy your time as well. Dining options at the resort are set to include two pool bars, the Swizzle Lounge, the Bayline Diner food court, and the full service Galaxy Bowl Restaurant inside the bowling alley.

As with all Universal hotels, guests here will enjoy on-site transportation and early park admission to the Wizarding World of Harry Potter. However, guests here do not receive free Express Passes as they do at the other resorts on property.

With so many exciting developments on the way, there are lots of enticing reasons for guests to book a stay at Universal Studios in the coming months and years. Thanks to the newest resort addition, a budget vacation to Universal will be more manageable than ever.