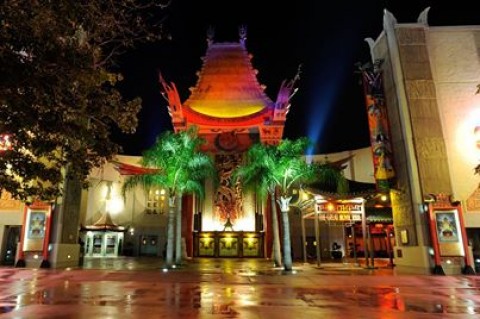 When it was first built, the Great Movie Ride was the centerpiece of Disney-MGM Studios (now Disney’s Hollywood Studios). Upon entering the park, guests could see straight down the main drag to a stunning replica of what was then known as Mann’s Chinese Theatre. This iconic ride was in fact the entire inspiration for the third Walt Disney World theme park. It was originally designed for Epcot, but then-CEO Michael Eisner loved the ride so much he decided to create an entire theme park around the idea of exploring a working movie studio.

In 2001, the Sorcerer’s Hat appeared directly in front of the Great Movie Ride (or GMR to cast), obscuring the once-breathtaking view and taking over as the park’s icon. Originally constructed for the 100 Years of Magic Celebration, the hat is a fixture that many GMR Cast Members hope to one day do away with. 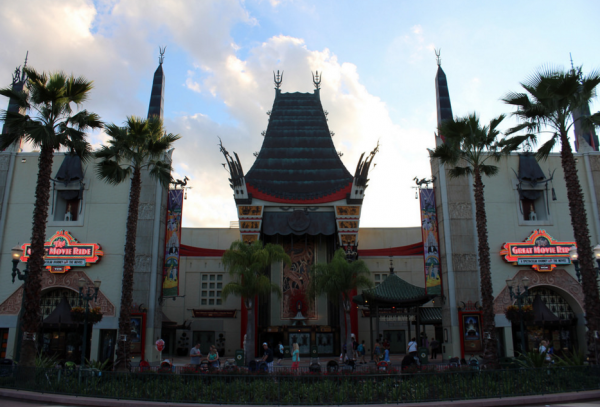 In the shadow of the icon, you’ll still find the Great Movie Ride in all its glory. Cast your eyes downward in front of the attraction’s façade and you’ll see handprints (and some footprints) of your favorite Disney characters and movie stars. The Cast Members who star in the ride get to put their handprints on the attraction as well, though guests will never see them. In a backstage hallway, every GMR Cast Member puts his or her handprint and signature on the wall after completing their training.

The ride’s queue winds through a recreation of the Chinese theater’s lobby. You’ll pass several glass cases with authentic movie props and costumes. These rotate often, so you may see something new on every visit. Next you’ll enter the theater where a looping video shows classic scenes from old movies. The doors at the bottom of the theater take you to the ride where you’ll travel right into the movies.

The Great Movie Ride has two possible shows, known as “A” and “B”. When the park isn’t busy, only the “B” show will run and you’ll see a single vehicle sitting on the dock. If there are two vehicles on the dock and you happen to get into the front one, you’re in for a real treat. This is the much rarer “A” version of the ride. Even when this show is running, it typically only shows up in one or two of the five sets. If you really want to get onto this vehicle, you can always ask if an “A” is running. Cast Members will usually accommodate if they can. The show lasts for 22 minutes so if you’ve just missed one, that’s as long as you should have to wait for it to come back around.

Once you’ve settled into your vehicle, a live tour guide will take you on a tour through the movies. The first scene you see is a tall cake of dancers from “Footlight Parade.” Don’t judge the ride too harshly from this first impression. The set originally rotated and featured fountains of water. Thanks to a slew of technical difficulties, this concept was eventually scrapped. Today, the stationary scene is visible through a scrim and remains disappointingly dry. However, the next set you come across might make up for it as you meet Gene Kelly dancing in the rain. Finally, you pass Julie Andrews and Dick Van Dyke from Marry Poppins. After this scene, the ride begins to take an unsettling turn. 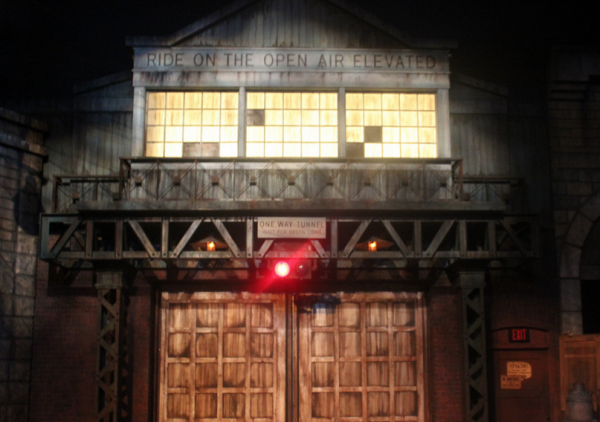 Passing through the first set of doors, you find yourself in a seedy alley. To the right is James Cagney from The Public Enemy. If you’re on a “B” vehicle, you’ll stop here to wait for a red light. A live gangster enters the scene and hijacks your vehicle, taking over for the next leg of the show.

If you’re in an “A” vehicle, you’ll pass right through the gangster scene and stop on an old Western set with Clint Eastwood and John Wayne. This show is hijacked by a bandit and features pyrotechnics in the ensuing firefight. For both the flames and the general rarity of the scene, most people consider the bandit the better of the two options.

After your hijacking, the vehicle proceeds through a scene from Alien. Toward the end of this set, look off to the left and you’ll see computer screens covered with a series of 1’s and 0’s. These screens purportedly feature the names of some of the Imagineers who worked on the ride in binary code.

The next scene features Indiana Jones in Raiders of the Lost Ark. Scan the walls carefully and you might be able to spot hieroglyphs featuring Mickey and Donald Duck as well as R2D2 and C3PO.

Finally, your vehicle will stop in front of a giant statue of Anubis. Entranced by the glittering jewel at the top of the temple, the gangster (or bandit) exits the vehicle and ascends to the top of the statue. In a fortunate turn of events your tour guide manages to thwart the show’s villain and return to the vehicle.

In following scenes, classic movie fans will recognize Johnny Weissmuller and Maureen O’Sullivan in Tarzan the Ape Man followed by Humphrey Bogart and Ingrid Bergman in Casablanca. The Casablanca set features the front half of an airplane. Take a good look, because you’ll see the tail end of this same plane as a piece of wreckage on the Jungle Cruise between Schweitzer Falls and the hippo pool.

After Casablanca, you make a turn through a dark windy tunnel that’s strongly reminiscent of a tornado. This scene features sorcerer Mickey from Fantasia. However, the short tunnel was originally designed to be a cyclonic entrance to the Wizard of Oz scene that follows. It’s rumored that legal issues prevented this because the licensing that Disney obtained limited the amount of time and space the attraction could devote to this movie. 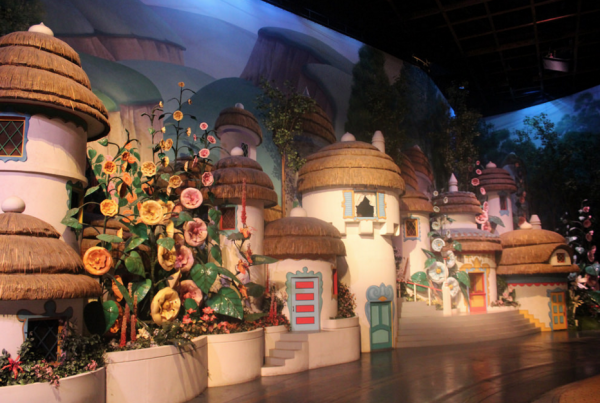 Regardless, the existing Wizard of Oz scene still includes an immersive replica of Munchkinland complete with the Wicked Witch of the West arriving in a plume of smoke. The witch is an A-100 animatronic, far more advanced than your average bobbing munchkin. This was the first A-100 animatronic to appear in a Disney park. When Pirates of the Caribbean was updated in 2006, Jack Sparrow joined the ranks as an A-100 animatronic as well.

After you escape the clutches of the Wicked Witch, you catch a glimpse of Dorothy and her friends approaching the Emerald City before you move into the finale theater. Like the Fantasia scene, this massive room was originally designed for a more elaborate purpose. The original concept for GMR took the “A” and “B” vehicles into separate rooms where they would individually encounter the Wizard of Oz. The “man behind the curtain” would be your gangster or bandit. Replicas of other animatronic characters you met through the ride would line the stage as well and all would bow along with your hijacker and tour guide for a rousing finale.

Both legal considerations and budget constraints likely played a role in what came of this scene. Now the finale merely features a short video with clips from various movies. The film has been updated to include more recent films such as Pirates of the Caribbean and Finding Nemo. Tear your eyes away from the film for a moment and you’ll notice that the room is much larger than necessary – the only indicator of its original purpose. 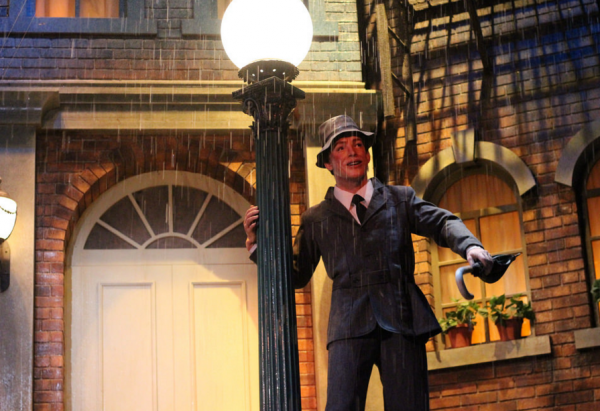 Filled with time-tested classics, the Great Movie Ride offers a nostalgic step back in time with strikingly accurate recreations of actors and scenes from classic films. This attraction is a staple of Disney’s Hollywood Studios and should be considered a must-see for anyone who wants to get to the roots of what this park was designed to be.

Thank you for this article! I'm a big fan of GMR and there were still things I learned while reading this!