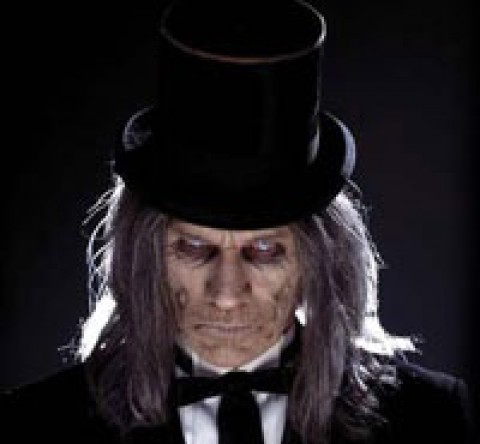 As the cool air settles across the United States, a dark and sinister force has emerged in Orlando. Universal Orlando’s Halloween Horror Nights event continues to be the industry’s leader in chilling entertainment. With seemingly limitless intellectual properties, special effects, makeup, soundstages, and movie-making wizards at its disposal, Halloween Horror Nights is again scaring up fans of terror. But how did we arrive here?

First, the fine print: I am a chicken. I have never attended Halloween Horror Nights. I never will. I don’t like being scared. But this annual event has, historically, represented the best of what Universal’s creative minds are capable of. As a fan of theme parks and themed entertainment, the stories, characters, and settings created for Halloween Horror Nights are mind-boggling, and I’ve spent years happily collecting all the information I can on an event I’ll never attend. Be warned: Universal suggests its event for people 13 and up, and the material contained within is appropriately labeled as such even in writing. The fearless and the fearful, read on.

The world’s scariest theme park event began in 1991, named Fright Nights. Then just one meager haunted house (called “The Dungeon of Terror,” and constructed in the queue line for the Jaws boat ride) hosted on three nights, Fright Nights was a simple event that was focused heavily on entertainment. In 1992, the event was renamed “Universal’s Halloween Horror Nights,” adding a new maze (“The People Under the Stairs”) in one of Universal’s enormous backlot soundstages. As well, many of the park’s attractions were “haunted” by night, as E.T. Adventure became “Alien Forest” and Kongfrontation became “Tramway of Doom,” featuring appearances by the nefarious Darkman.

The event continued each year, adding more and more nights with more and more haunted houses, typically based on Universal’s horror classics like Psycho and The Mummy, with original house concepts emerging, including the popularly recurring “inmates on the loose,” “psych ward escapees” and “evil carnivals” that would remain a staple of Horror Nights and other haunted events until today. 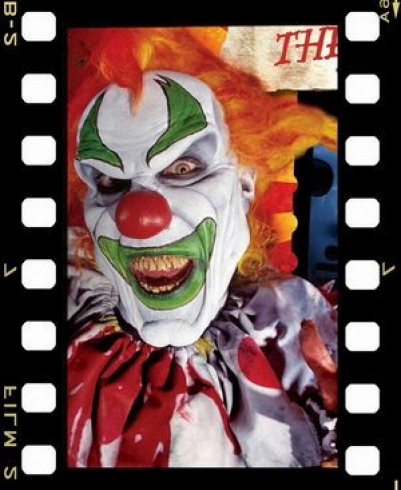 Beginning in 2000, Universal did something extraordinary. For its tenth year, Halloween Horror Nights X, they created a central iconic figure to own the park – an original character who would represent that year’s event. They constructed a gruesome and terrifying back-story to Jack, a sickening and vicious clown who, according to his disturbing legend, had murdered children in a wholly unsettling fashion. Each haunted house and scarezone (themed areas of the park where scareactors could freely roam amid immersive sets) was tied to Jack’s story, even if only that his twisted and perverse imagination had brought each to life.

After the wild success of Jack, plans for 2001 were ambitiously detailed. Jack’s brother, Eddie, would kill off his clown sibling and take over the event, wielding a chainsaw, a metal muzzle, and a milky green eye. However, the horrific terrorist attacks on the United States in September necessitated major changes. At once, any and all references to blood or the word “terror” were stripped from the event. Red light bulbs were changed to green. Eddie disappeared from marketing and his brother was re-hired with the slogan “Jack’s Back” for Halloween Horror Nights XI. 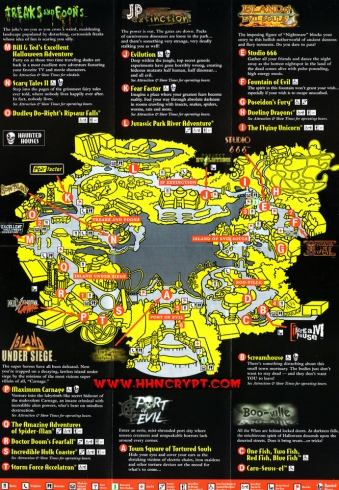 All of the park's islands became twisted versions of their daytime selves. Image via HHNCrypt.com (Click for larger)

2002 would be the event’s most defining year yet. The second park at the resort – Universal’s Islands of Adventure – had opened in 1999, and the park was finally ready to host Horror Nights itself. What’s more, the Islands park is as detailed as any Disney park on Earth, with separately themed “lands” that are each detailed to from head to toe. “Scarezones” were dropped entirely and Halloween Horror Nights: Islands of Fear (2002) did something tremendously large-scale instead: each Island at the park became an evil, twisted version of its daytime self. It was obvious, but brilliant.

Port of Entry became the dark “Port of Evil.” As Horror Nights began, the park’s icon, the Pharos Lighthouse, would flicker out and fog would pour from its tower.

On Marvel Super Hero Island, bodies of famous heroes would litter the ground as the villains took control in Island Under Siege. The usually bright land of the Sunday funnies, Toon Lagoon was filled with shoulder-high foam as distorted and disfigured Treaks and Foons prowled the bubbles and the distorted “Scary Tales” house turned childhood dreams to nightmares. Of course, Jurassic Park became JP: Extinction, where the electric fences short circuited and dinosaurs roamed the paths (including a haunted house called “Evilution,” particularly disturbing in its actors dressed as experimental dinosaur-human fusions in tremendous pain).

The ancient, mythological-themed Lost Continent became the Island of Evil Souls, a terrifying netherworld of evil mythology, presided over by a ram-horned demon named Nightmare. There was one land, though, that posed a threat to the use of Islands of Adventure for Horror Nights. 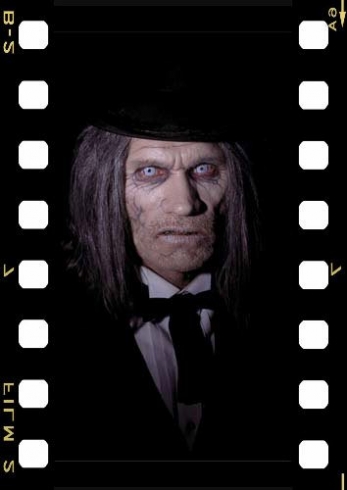 Dr. Seuss’ widow, Mrs. Geisel, had meticulously overseen the creation of Islands of Adventure’s sixth land, Seuss Landing, in 1999. She was protective of her late husband’s work, and approved such application of his name very sparingly. Seuss Landing was in all ways marvelous, but it was built with a very particular caveat: nothing scary would ever be associated with her husband’s work. So Seuss Landing was called Boo-Ville and presented with the notion that “The Whos” of Seuss’ work had been frightened by the dark, and locked themselves away in their homes. So Boo-Ville was deserted, devoid of characters or scares.

Auxillary pathways very clearly marked as separate from Seuss Landing lead to haunted houses in soundstages, including one themed to the year’s icon – The Caretaker. This tall, grim, pallid man (above) was represented in his own haunted house, Scream House, which told the tale of his odd eccentric behavior with the bodies he was charged with burying in the old graveyard...

In its first decade, Universal’s Halloween Horror Nights had become the standard for amusement parks. In 2002 in particular, it had proved itself with an infallible event icon, a smart and ambitious storyline, and more haunted houses than ever. What would the next decade hold?

A new icon was introduced for Halloween Horror Nights 13 – the sinister Director, a young and ambitious indie filmmaker whose bloodstained camera signaled his penchant for snuff films and violence. His plan? Commandeer Islands of Adventure’s themed lands as sets for his newest horror franchises. The skyscrapers of Super Hero Island became Toxic City, filled with glowing ooze and mutated, melting monsters. Toon Lagoon again twisted its cartoon character, but this time into Hide and Shriek, with the land entirely covered in black-and-white patches that just so happened to match the black-and-white bodysuits of scareactors who could hide in plain sight amid strobe flashes. 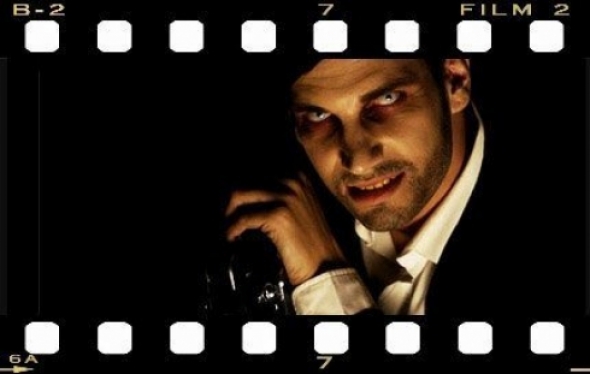 The Director cast the jungles of Jurassic Park as the backdrop for Night Prey, a horror movie where odd, beastly creatures and tribal cannibals stalk us –the movie stars. The ancient Lost Continent became Immortal Island, home to the terrifying Fire King and Ice Queen who controlled the north and south half of the island, respectively, and waged war with you in between. Seuss Landing returned as Boo-Ville, this time leading to The Director’s house – “All-Night DrIvE-In,” where you literally step behind the silver screen and into the Director’s favorite films; spoiler alert, no romantic comedies.

Halloween Horror Nights 14 took place in both parks – the northern half of Islands and the southern half of the Studios were connected by auxiliary pathways between show buildings; the event had no icon or overarching theme.

My only problem with the event is the proliferation of booze. It's everywhere. I wish they'd remove it. It would make the event more enjoyable.

Overall, great job on the article. Had to comment simply to say that nobody thinks that about this years The Walking Dead house. There's nothing special about it. Replace that with Halloween and you'll be good.