Chessington World of Memories: The Fifth Dimension, Bubbleworks and Vampire

As I creak toward my thirtieth year on this planet, I still get excited when I visit Chessington World of Adventures - although my bones seem to hurt a lot more now after spending an entire day there!  This is a park that, for me, certainly holds the strongest childhood memories but it's a lot more than that for me now;  this is the park that got me enthused into the world of dark rides and immersive theming.

The enthusiasts among you are probably yelling "Fifth Dimension" at your computer screen now and, as I am sure you saw in the title, you'd be correct in thinking this is the ride of which I was most enthused about.  As a little person in the late 80s, this ride was absolutely perfect for me as it was a mixture of adventure, slight terror and plain good vs evil.

Of course my memory is a bit vague, but the ride was essentially a journey through a computer to help Zappomatic fight an evil creature (known as The Gorg) that had spread!  Three things struck me in this dark ride specifically:

1)  The smell.  This ride was like a permanent ash tray; the smoke effects were, quite literally, breathtaking!  It was a lovely musty smell that I've long since now come to associate with dark rides!  They all seem to have it!, and the smell still slightly lingers within the Tomb Blaster.

3) The "interactive" element.  Tomb Blaster is a fully interactive dark ride, but The Fifth Dimension had a fake interactive element where you had a big red button you had to press once it lit up in order for you to destroy The Gorg. Think of it as the moment in Mission: Space over at Epcot at Walt Disney World Resort in Orlando!  It may seem puny and a bit pathetic now - but, if you were 5 - it was the best thing ever! 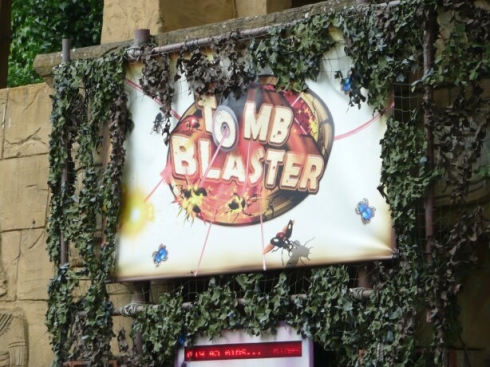 Tomb Blaster has taken the place of the Fifth Dimension.

So, thank you John Wardley and all at Farmer Studios for getting me into dark rides; I owe you a lot!  Speaking of John Wardley (That’s Lord Wardley to you), he is pretty much responsible for so many great things at this park (and many others around the country).  The other two stand out things for me at Chessington World of Adventures were Professor Burp’s Bubbleworks and, of course, Vampire.  Due to my love of ghost trains as a child (thanks to the Fifth Dimension), I was drawn more toward Vampire as an attraction. 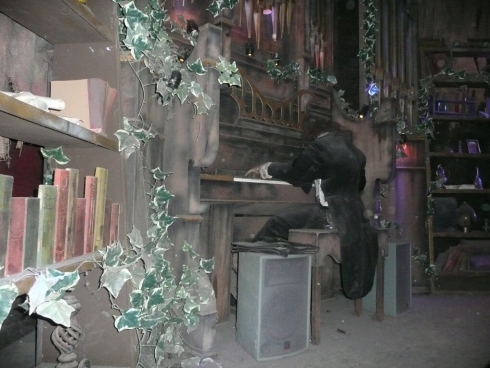 The Vampire queue started with a walk through an overgrown cemetery which lead to the entrance of the castle; this indoor labyrinth toward the ride station was so foreboding, dark and eerie I remember pulling upon my father’s hand quickly deciding I did not want to enter this building! Of course, now it makes me realise now what an amazing job Wardley and co did to set up this experience, but - back in my infancy, I found it extremely scary! 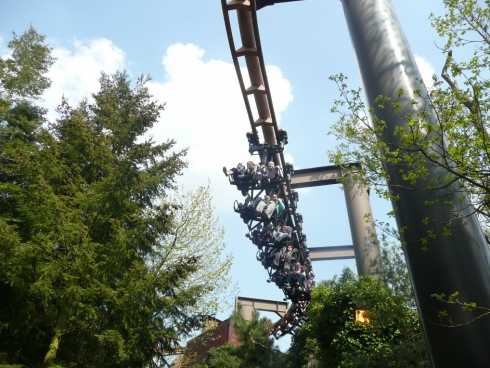 The ride itself was (and still is) a wonderful experience; flying over the rooftops of Transylvania, multiple lift hills, tunnels and the fact it didn’t go upside down was amazing! As a side note, I remember seeing the ride for the first time and my mother (who’d never seen an inverted coaster track before) said “THE WHOLE THING IS UPSIDE DOWN!”.  Now there’s a ride idea for Alton Towers!!

The other ride in the Transylvania area was (and in some cases, still is) one of the more unique dark rides in the country.  Not only for its ride transit system (think OmniMover on water) but for its original story, characters and theme.  I am referring here to Professor Burp’s Bubbleworks; a factory tour through a bavarian fizzy drink (soft drink) factory! N.B: I won’t be talking about the current state of the attraction, as it’s not worth mentioning on this website, or any website... anywhere.  My memory is a bit vague when it comes to this attraction - but there are a couple of things I will never forget: 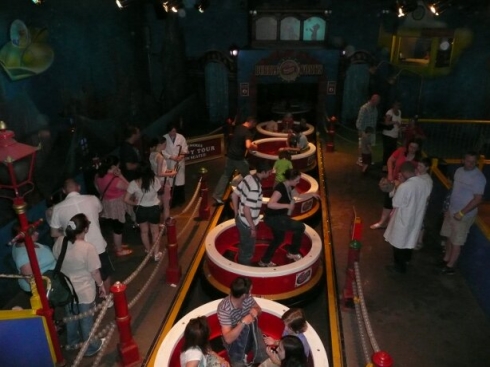 1)  The smell.  Yes - once again - that dark ride smell! However, this ride used smell to its advantage - by enhancing the ride experience by pumping scents in to relate to the story.  And that’s all I remember about the smells; I don’t remember what smells were used - but I know smells were used!

2)  The Music.  As well all know, music plays a hugely important part of any theme park experience (a topic I’ll be writing about at a later date, I am sure) but the music was great in this attraction.  The music, from what I’ve been told, has been re-instated into the attraction - which is wonderful; it (much like “It’s a Small World” takes a main theme and warps it into many different styles to match the scene we’re looking at.  Examples in the ride are Hawaiin, German Oom-Pahh Band, Fairground and many others.  The only issue I have with the sound now is that it’s TOO LOUD in there!  But, I digress...

3)  The Fountain Finale!   This is a wonderful moment where the boat does a small drop into a room with many fountains arching over the boat forming tunnels over the boat trough.  The most wonderful thing about this moment was it was lit by strobe lights.  Sadly - they’re no longer there, but it really did add an amazing ending!

There’s so much more to this ride - from the character of Professor Burp himself to memories of when the boats would fill with water from the bottom (an effect I discovered wasn’t intentional!) - both of which are gone now! The ride had a makeover from a fine art of genius to a tawdry, tired advert for Imperial Leather.  One tiny light at end of the dark (ride) tunnel is that the marketng has been completely removed now - but the theme still remains ducks.  Whatever, Merlin.

Thanks for the memories!

What are your memories of Chessington World of Adventures in its early years? Leave a comment below!