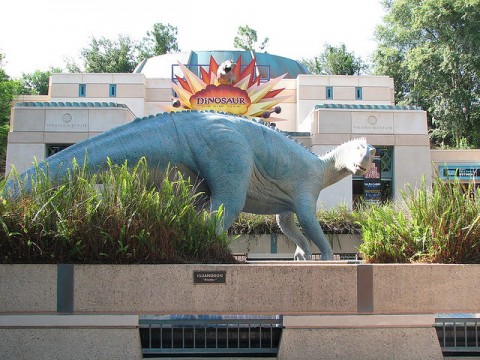 Dinosaur, in Disney's Animal Kingdom, is a thrilling ride that takes you back in time to the age of the dinosaurs. Here's an insider review from a former Disney Cast Member!

When Disney’s Animal Kingdom first opened in 1998, the idea behind the park’s design was to create three distinct areas: animals that are, animals that were, and animals that never were. The finished product was primarily animals that are, but those that came before have their fair representation in the form of a thrilling ride known as Dinosaur. This attraction is housed in a building known as the Dino Institute in the back of Dinoland.

Note: this review contains spoilers, so if you haven't experienced Dinosaur yet, be warned! 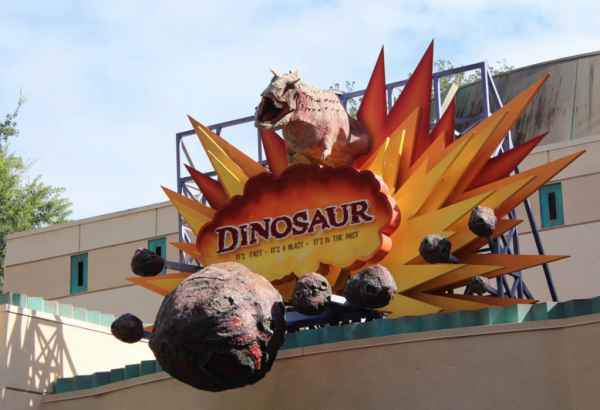 To provide a brief back story, Dinoland is located in the fictional Diggs County. When dinosaur fossils were discovered in this area, two things happened. First, the Dino Institute opened up for scientists and archaeologists to further the study of prehistoric life in the area. Second, the enterprising locals known as Chester and Hester decided to open up a tacky carnival to make as much money as possible off of the new swell of tourist traffic spurred on by the discovery of dinosaur bones in the area.

Though you have to pass by Chester and Hester’s madness to get back to the Dino Institute, you’ll notice a distinct difference in the appearance of this area as you progress down the street. This is where the serious-minded academics pursue their research projects in an attempt to better understand the fascinating world of dinosaurs. 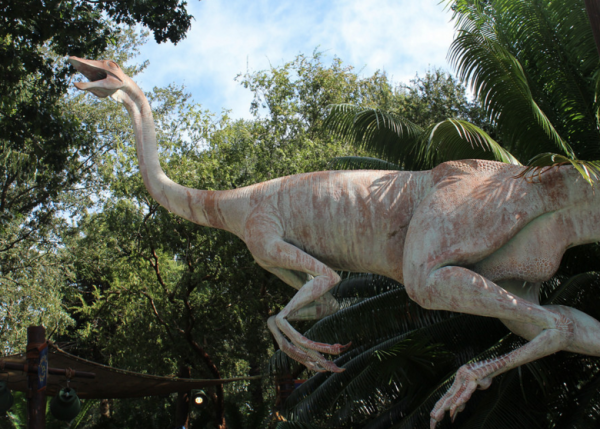 Dinosaur was originally known as Countdown to Extinction. In fact, homage to this fact still exists in the loading dock where you’ll see “CTX” printed on the wall. This was the previous abbreviation for the attraction (today it’s known to Cast Members as “DTR” for “Dinosaur the Ride”). The attraction was rebranded to coincide with the release of the film “Dinosaur,” and Aladar showed up in the shallow pool out front. While the dinosaur species featured in the ride and movie are the same, there are no other solid connections between the two.

Entering the lobby of the Dino Institute, you find a display of prehistoric trees and animals. The main rotunda houses a complete skeleton of the dreaded Carnotaurus, a vicious dinosaur found in the Late Cretaceous Period. While you wait to enter the orientation room, you hear Bill Nye the Science Guy periodically explaining how dinosaurs lived and went extinct.

Once in the orientation room, you meet the scientists who created the Time Rover, the vehicle of choice when traveling back to the time of the dinosaurs. One of the scientists, Dr. Seeker, is interested in bringing back a particular dinosaur, the Iguanodon. This mission is extremely dangerous because the dinosaur in question is located at a point in time close to the asteroid strike that causes the mass extinction of the dinosaurs. He feels like he has enough time to do what he wants before things go really wrong, though, so we press on.

The hallway outside the orientation room used to include a promotional spiel for the ride's sponsor, McDonalds. Though this is no longer heard here, relics of this sponsorship remain. On the loading dock, three tubes running along the ceiling are labeled with the chemical formula for keychup, mustard, and mayonnaise.

Once you’re securely fastened in to your Time Rover, you’ll head off. After turning a corner, the Time Rover enters the time tunnel and heads back to the Late Cretaceous Period. Look to your right and you’ll notice a whiteboard where Cast Members past and present have scrawled their names.

As you enter the age of the dinosaurs, you’ll find that the plant life is large and imposing, and the sky filled with noxious-looking clouds and bright shining stars. The vehicles pass a variety of dinosaurs, some more menacing than others, but all are too small to be our Iguanodon. Suddenly, the Time Rover’s radar picks up on a sizable beast. Could it be our lost friend? Sorry, but no. Instead, we get our first glimpse of a living, breathing Carnotaurus. The vehicle quickly moves past it, finding several other dinosaurs that are also off the mark.

The longer the vehicles searches in vain to find the Iguanodon, the more dangerous the atmosphere becomes. Small pieces of fiery rock fall from the sky, catching trees and brush on fire. The further in the jungle we go, the larger the pieces of rock become. Soon, the vehicle loses traction and careens down a muddy hill before stopping directly in front of the Carnotaurus. Angry that he missed out on a prime meal the first time around, the Carno literally gives chase as the vehicle weaves in and out of the jungle in total darkness.

Thinking that the coast is clear, the Time Rover rounds a corner only to come face to face to the Carno. The massive full body Carnotaurus that you encounter on the right is your photo op. As he roars at you, you’ll notice the blinding flash of the camera, catching what is usually a face of terror for first-time riders. If you like to ham it up, this is where you need to pose. After snapping that quick shot, you move on. 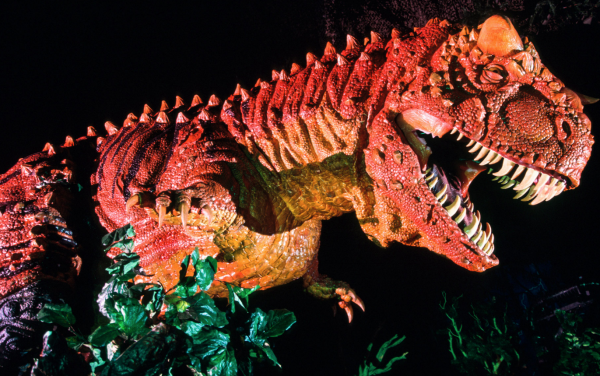 As the sky begins falling around the vehicle, all appears lost until the Iguanodon arrives just in time to lift a large tree out of the way and provide safe passage. The asteroid is nearly on top of the Time Rover, but so is the Carnotaurus. You’ll see this beast one last time in the form of an oversized dinosaur head that lunges at you just before you drop steeply to escape his grasp. In a bright flash of light, it would seem as though all is lost. However, as the lights come up, you find that everything worked out and you've returned safe and sound to the Dino Institute.

As you pull slowly around the corner back to the loading dock, you’ll notice an incongruous mirror. Rumor has it that this was originally going to show your ride vehicle with the Iguanadon riding in back using an effect similar to the hitch hiking ghosts of the Haunted Mansion. The feature never came to be, however, so here sits a lonely mirror for no apparent reason.

As with nearly all theme park rides, you’ll exit through the gift shop and have a chance to see your ride photo before you exit. If you have dinosaur fans in the family, this is a great place to stop and pick up some souveniers.

This attraction can be intense for both children and adults, but its exciting nature makes it a feature that really shouldn’t be missed.