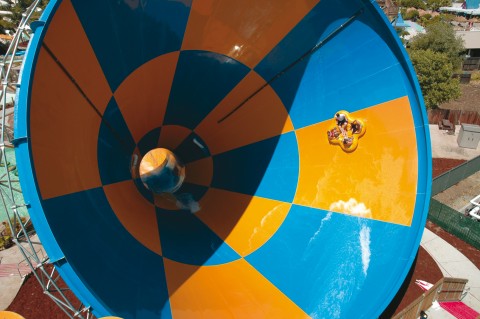 Welcome to the September edition of the "Australian Theme Park Roundup", provided exclusively to Theme Park Tourist readers by AusParks.com.au.

Adventure World in Perth (Western Australia) has announced that they are undertaking construction on a $12 million (AUD) Gerstlauer Eurofighter roller coaster.

While the name of the roller coaster hasn’t yet been revealed, the ride is rumoured to carry some sort of horror-based theme.

The Typhoon water slide will begin with a heart-stopping 136-metre-long flume section that propels riders down an 18-metre drop into the centre — or “bowl” — of the Typhoon.

The Typhoon is expected to open by the end of the year.

Renowned entertainment company “Sudden Impact!” is working with Dreamworld to design and develop the attraction, which will replace the AVPX laser tag arena.

Zombie Evilution is scheduled to open on Friday, 13 September.

The “Gold” season passes — which cost $124.99 (AUD) per person — include unlimited entry until the end of the season (which finishes on 27 April 2014), free car parking and early entry into the park.

(Interesting fact: Wet'n'Wild Sydney will be the first theme/water park in Australia to charge for parking)

The after-hours event is scheduled to take place each Friday and Saturday night in October, as well as on the night of Halloween (31 October).

Dreamworld (Gold Coast, Queensland) is reportedly in the process of replacing their two steam locomotives with a newer, more energy-efficient diesel locomotive.

The new diesel locomotive is expected to be fully operational by the end of October.

Ashley lives in Brisbane, Australia, and is the editor-in-chief for AusParks.com.au.

His favourite theme park is Universal Studios Florida, and his favourite roller coaster is Manta at Sea World Orlando.