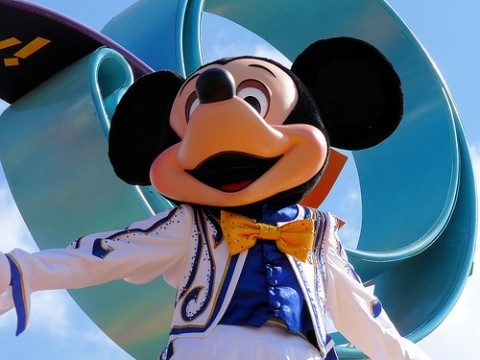 Working at a Disney theme park is great…and awful...and often completely surreal. While some of the ups and downs of working for the mouse can translate well to nearly any job (if you’ve never had to suck it up in the name of the customer always being right, I want to know what you do and how I can become one), others are completely unique to this type of work. Though completely subjective, here are some of the best and worst things about being a Walt Disney World Cast Member.

Disney Cast Members can enter the parks free most (but not all) days of the year. They also have free passes they can give to others, so if you happen to have a lot of friends who aren’t in the theme park industry, you can still casually propose an afternoon at Epcot as though you’re asking everyone to meet you at the mall.

When you’re a Cast Member, if you feel like popping in to the Magic Kingdom just to see Wishes, you can do it without feeling like you’re wasting a ticket. You become immune to the dreaded tourist syndrome of running ragged to do it all in one day because you have to squeeze every last penny out of that expensive ticket you bought.

Cast Member discounts are nothing to sneeze at, and they’re even better around the holidays, so you can always impress your non-local family and friends with Disney merch for Christmas. Cast Members also have access to backstage stores with Cast Member exclusives you can’t buy anywhere else (except perhaps on eBay…). If you adore all things Disney, this perk is especially great because you can purchase authentic theme park cast-offs like hotel furnishings, park signage, and restaurant dishes.

3. A behind-the-scenes look at the magic

Most people have to shell out a few hundred dollars for a glimpse behind the scenes at Disney parks, but Cast Members get to see it all for free. Disney regularly offers special events for Cast Members such as tours of popular attractions with the lights on, so you can experience more than just your own particular area. When new attractions open, Cast Members hear the news before anyone else and usually get to experience the attraction during exclusive preview days before it opens to the public.

4. That feeling you get when you make a kid’s day

Most Cast Members have at least one story of a stand-out moment where they got to make someone’s day.  Every now and then you’ll have an opportunity to really do something special, like help a guest find the perfect souvenir or offer special Fastpasses to a family who wouldn’t otherwise have time to see a certain attraction. Seeing a child’s eyes light up at the sight of a favorite character or watching him shriek in glee on one of the rides helps to make the long hours and hot days worth it.

5. Knowing you’re a part of the Disney dream

Not all Cast Members buy into the idea of fulfilling Walt’s dream. But for those that do, there’s something really special about putting on the name tag and creating the experience that he so wanted to give each and every park guest. Disney definitely has a very strong culture and for those who appreciate what it’s all about, it’s amazing to be a part of it.

I know many cast members visit this site, so I wanted to take a minute to share a recent Disney experience I had and say thank you. I apologize in advance for how long this comment will be.

My family recently took a trip to Disney World. We had been wanting to go for years and had finally saved enough money to go. We could only afford one night in a hotel and one day at Disney World, but we were so happy to just be going.

My husband and I made a schedule beforehand to get the most out of our day. In the morning, my husband and 10 year old son went on some rides while my 3 year old daughter and I went to meet princesses. After about an hour, my daughter suddenly became a bit lethargic and said she didn't feel well. She hadn't shown any signs of being sick before that; I figured she had gotten too hot. We went to go sit in the shade with a bottle of water, but it didn't help. I was trying to reach my husband to tell him she needed to go back to the hotel, but that he and my son should stay. She was sitting in my lap and suddenly tensed up. Being a nurse, I know a febrile seizure when I see one. This is where the cast members come in. I didn't even have to go find one to ask for help. A nice young man noticed that something wasn't quite right and asked me if something was wrong, along with another that saw this from a distance and quickly walked over. They immediately called for paramedics and went to go find my husband. Within 10 minutes, both the paramedics and my husband were there and we were on our way to the hospital. It turned out that a viral infection caused the febrile seizure. She was kept for observation, but thankfully she didn't have anymore problems and was released the next day.

I am incredibly grateful for the cast members quick, calm response. Their calm demeanor helped ease the anxiety of a scared little girl who couldn't understand what had happened or why she felt the way she did. However, they went above and beyond for my family. They caught wind that my family saved money for years to take this trip and that our one day was cut so short; they surprised us with another night in the hotel and passes for another day, completely free of charge. I can't even tell you just how much this touched my family and how happy it made us. When we went again, we had the perfect day and made so many wonderful memories that will last a lifetime. So for any cast members reading this, thank you so much for everything you do. You turned a disaster into a dream that my family will never forget.

I would have to say as a cast member of almost four years, that by far the worst thing is how hard it is to move up. I have an english degree with honors and worked for a prestigious world wide academic press where I read doctorate professors essays and edited them, but they told me that I wasn't qualified for a simple administrative assistant job, where the only listed requirements were a GED. Unless you're willing to abandon your family, friends, and any off time to spend every single second of it working, it's practically impossible to do anything. And if you have any kind of illness to pop up (I had a hormone disorder that started effecting my joints, I practically collapsed on the job twice because I couldn't take any more off days without being penalized I had the sick pay, but it would've kept me from being able to apply to other positions), you better forget about ever getting to leave your current role.

As a whole, I'm glad I had my disney experience, I miss being in the climate and meeting so many different people every day. But for the way they treat you, it's not worth the bare minimum pay.

I am shocked that bad pay wasnt on the list. Who cares if you can get the gifts at a discount you cant pay your bills working there so you dont have money to buy the damn shirts and shot glasses. lol.

Don't forget the guests treating cast members like dirt because they can't get a fast pass for Toy Story. The guests act like lunatics....so rude and yet no matter how much they degrade the cast member, they still feel like they deserve something. a free trip. free hotel stay. Sorry that the ride broke down but it's out of their hands. Guests need to learn common courtesy.

There AREN'T many "free" tickets. Some Cast members only get 2 a year that they can just hand over to someone. To get someone in on your Main Gate pass you have to physically accompany them and there is a limited number you can get in and a limited number of times. Also there are blockout times when you can't use them at all. Please don't mislead people that Cast members can just hand anyone a "free" ticket....