Tales from the Towers: Is the legend of Hex's Chained Oak real? 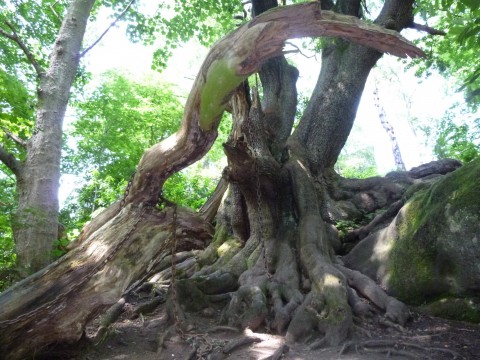 I've recently released my new book, Tales from the Towers, which tells the story of how Alton Towers developed from a barren patch of land holding a small hunting lodge into the UK's most popular theme park. We're serialising select parts of the book on Theme Park Tourist, along with photos that didn't make it into the print edition. In this final article, you can learn whether there's any truth to the legend of the Chained Oak, which forms the backstory for Hex - The Legend of the Towers.

Sign up for our special newsletter to be notified when the book is released, and when further articles in this series are published.

Work on Secret Weapon 5 (which eventually became Air) began not long after Oblivion opened, but Alton Towers was busy planning something very different to celebrate the new millennium. This time, the park’s new attraction would make use of the very structure that lends it its name.

The once-grand mansion that sits at the heart of the park was in need of significant repairs, which would cost a vast sum of money. Designer John Wardley recalls: "We sat down with English Heritage and said 'look, there's this gigantic structure in the middle of the park which we can’t use, we can’t do anything with it. It’s not safe to let people in it, we can't put a ride in it – we can’t do anything. But yet you want us to spend millions of pounds just literally saving it from falling down. What can we do?'"

Taking a constructive approach, the heritage body asked the park to come back with some ideas. The options were limited. The park could not knock down any walls, or add emergency exits. Installing a dark ride inside the Towers was therefore impossible. Running a roller coaster around its exterior would be inappropriate and would never gain planning consent.

The Towers, though, could be potentially be used to house the queue for an attraction, as well as a pre-show. This would provide a solid business reason for restoring ruined areas. The ride itself, meanwhile, could be hidden in a concealed building at the back of the Towers - one that could later be removed if needed without damaging the building or leaving a permanent imprint.

It was decided at an early stage that the attraction’s theme should tie in with the history of the Towers, given that it would be housed within them. Wardley and his team held a brainstorm with Les Davies, the park’s archivist. Davies shared some of the myths and folklore surrounding the Towers, and one in particular stood out: the legend of the Chained Oak.

The legend tells that in the 1840s, the sixteenth Earl of Shrewsbury, John Talbot, was travelling past the site of the oak tree en route to Alton Towers. An old woman blocked the passage of his carriage, begging him for some spare change. The earl cruelly dismissed her, commanding her to leave his property. The woman, scorned, screamed a curse at him: "For every branch that falls from this oak tree, a member of your family will die.” Later, during a violent storm, a single branch from the tree fell to the ground. True to the beggar’s word, the earl’s son suddenly – and unexpectedly – died. Shocked and determined to avoid a repeat of the tragedy, the earl ordered that every branch of the tree be chained up to prevent further incidents.

Wardley and his team extended the mythology behind the Chained Oak in order to provide some context for the Vekoma Madhouse ride experience that would follow. In the new version of the legend, the earl brings the fallen oak tree branch back to the Towers, where he performs a series of bizarre experiments on it to try and eliminate the curse. 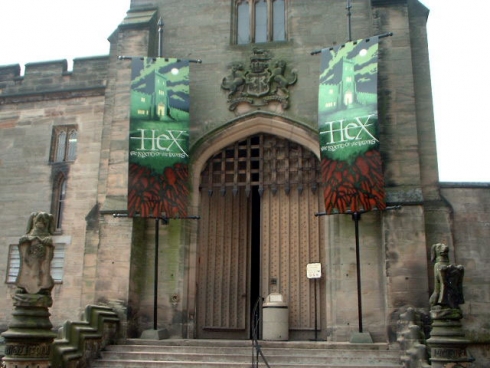 Seated in rows on either side of the branch, riders on Hex - The Legend of the Towers watch in amazement as the room begins to rotate around them, creating the impression that they themselves are turning upside down. Fittingly, the ride is an update of a system that dates back to Victorian times, when rotating rooms would be used to confuse and disorient funfair visitors.

Is there any truth to the legend? 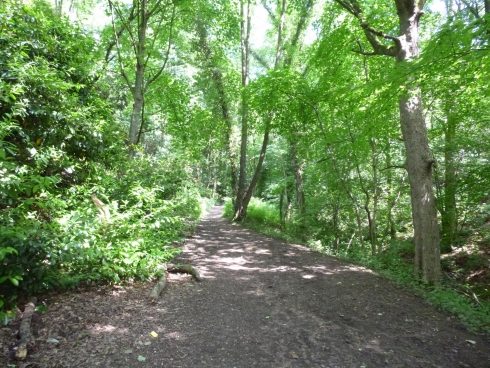 Did the earl approach the beggar lady via this track? (click to enlarge) 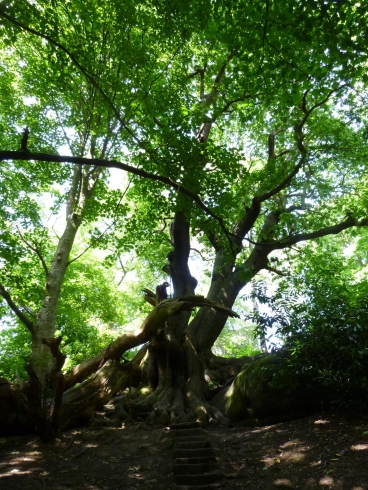 "Is the legend really true?" is the question on many riders lips as they leave Hex. Well, the tree itself is real, and is located on the former grounds of the estate (though outside the boundaries of the current theme park, with the land having been sold off in 1918). Staring at its enormous branches, held in place by sturdy metal chains, it is very easy to believe the myth. It does indeed sit close to the route of an old carriageway that would have been used by the Earl to visit nearby Cheadle, and he would have been the only person in the local area with the resources to put the chains in place. 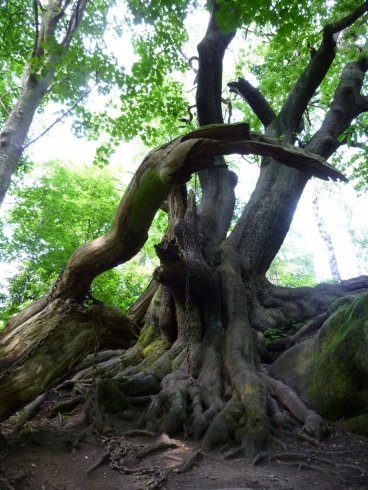 The hefty metal chains are still in place (click to enlarge). 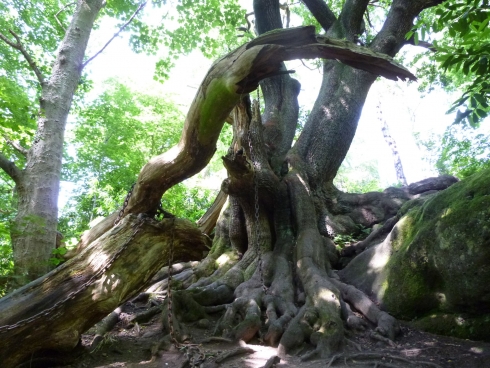 It's easy to reach the oak from the road close to Alton Towers' service entrance (click to enlarge).

It is likely that earl had the chains installed simply to keep the prized oak tree in good condition, given that it was so close to the carriageway. However, no documentation has survived to prove this, and so the actual reason behind the chaining of the tree is open to speculation. There is nothing to disprove, or indeed prove, the validity of the legend of the curse. 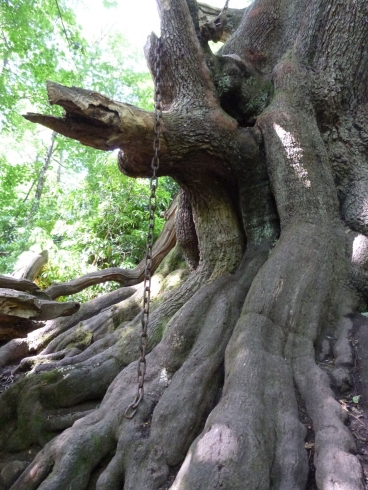 It's real...but is it really cursed? (click to enlarge)

However, if there was actually a curse, it would appear to have lost its effect. On April 9, 2007, a huge bough of the oak tree fell to the ground, chains and all. Thankfully, no member of the current Earl of Shrewsbury’s family died as a result. 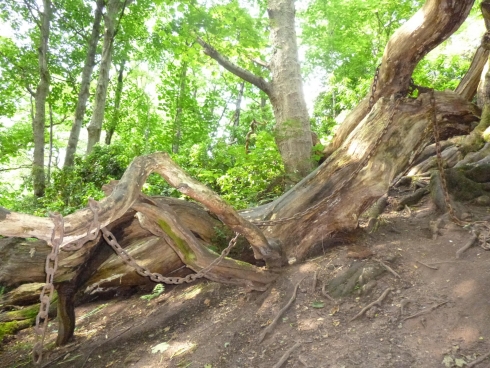 It is still possible to visit the Chained Oak today. Close to the service entrance of Alton Towers sits the Chained Oak Bed & Breakfast. Through a gap in a stone wall, a path leads down from the hotel’s driveway into the Barbary Gutter (following the route of the old carriageway). Walk down this for around five minutes, and you will come to the old oak tree, standing on the right at the top of a flight of time-worn steps. The fallen bough from 2007 still lies on the ground, covered in its chains.

Me & my brothers last year decided to walk the perimeter of Alton Towers & find the legendary Chained Oak. As a fan of the Hex attraction it was just to good an opportunity to miss!
So, one very sunny day we parked up near the beautiful castle in Alton village & walked down to the old station at the bottom of the village. We walked along the old railway cutting heading west. It is a nice & scenic walk along the valley bottom. After a while you will come to a track leading off to the right & on an upward incline. Following a small brook, the track gradually widens, confirming you are now on the old coaching route. Eventually you come into to a clearing where on the left hand side some gnarled steps lead steeply up to a foreboding & unfortunately very battered old Oak tree. Rusty chains hang sporadically from branches, some missing the wooden limbs they once held so tightly, some chains are embedded in the wood where the tree has grown around them. Large boughs rest on the ground where they have fallen. Even in its current sorry state there is still something about this tree that lends a strange eerie atmosphere to the clearing - on this bright, sunny day it felt dark & chilly & strangely quiet, pierced every now & then by the terrified screams of people dropping into Oblivion.

After taking a few photos we left & completed our circumnavigation of the park's perimeter, via the Alton Towers Hotel bar for a refreshing pint, on what was a very pleasant & rewarding walk.

If anyone decides to also visit the tree I would please ask that you follow the countryside code & refrain from climbing & hanging on the tree, unlike some people we witnessed, it's damaged enough & it should be preserved for others to go see & appreciate.