Tales from the Towers: The weird and wacky merchandise of Alton Towers 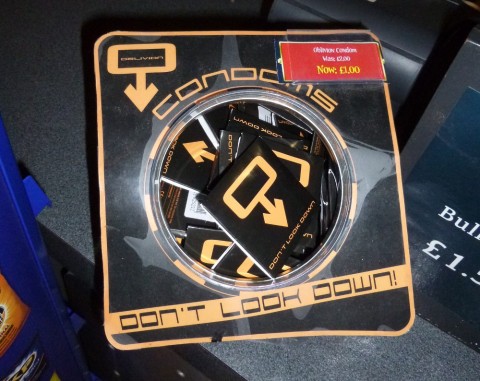 I've recently released my new book, Tales from the Towers, which tells the story of how Alton Towers developed from a barren patch of land holding a small hunting lodge into the UK's most popular theme park. We're serialising select parts of the book on Theme Park Tourist, along with photos that didn't make it into the print edition. In this seventh article, you can learn about some of the strange merchandise that Alton Towers has offered over the years.

It's something of a theme park cliché. Still high on adrenaline, riders spill out of an attraction…and directly into a shop. If the ride has delivered on its promise, the park hopes, the hapless guests will be powerless to resist the merchandise on offer. T-shirts, fridge magnets, on-ride photos – anything even vaguely related to the ride experience – are available at pumped-up prices. All in the name of increasing the average spending per guest.

Alton Towers, of course, has experimented with all kinds of ways of encouraging visitors to open their wallets. Over the years, the park has offered everything from high-class arts and crafts through to branded contraception aids in its stores. As technology has progressed, the merchandise has become increasingly personalised – but not always with successful results.

As a region, Staffordshire has been associated with the art of pottery since the seventeenth century. Even now, the nearby Stoke City football team are known by their nickname of "the Potters". Inevitably, then, one of Alton Towers’ earliest merchandising efforts revolved around its own on-site pottery, which operated from the 1950s until its closure in 1994.

Rather than being simply a shop, the pottery was a mini-attraction in itself. Guests could see potter Steve Parry-Thomas in action producing ceramic crafts on his wheel, which can now fetch hefty prices on auction websites such as Ebay.

The pottery was moved to the Farm area in the 1990s, and closed in 1994 as Tussauds took the park in a new direction. Indeed, some of the merchandise produced by the park's new owners was of a radically different nature, and more in-keeping with the park’s new focus on thrills than its history as a stately home.

By 1981, under John Broome’s tenure, the park was advertising "quality, themed shops" in its brochure. A wide range of hand-crafted basketware and expensive clothes were available from Shopping World in Aqualand, while Toyland offered “Toys of Character”.

In 1990, just ahead of the Tussauds’ takeover that saw many of Broome’s high-end shops stripped out of the park, there was eclectic mix of merchandise on offer from more than 50 outlets. The majority of the retail stores were clustered in Talbot Street and Towers Street. 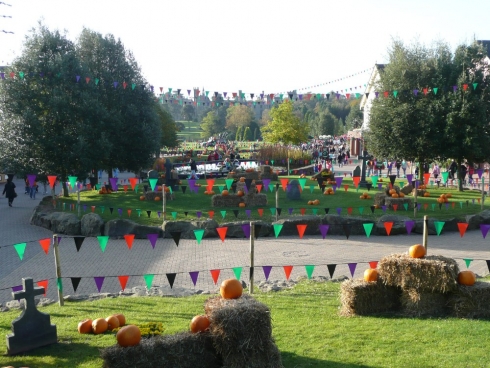 Towers Street was once home to an array of luxury stores.

On Talbot Street, guests could grab Henry Hound toys, mementos and souvenirs from Maison Talbot, browse a variety of cuddly creatures in the Raven’s Den or dress up in period costumes for a sepia photo in the Photo Studio. On Towers Street, meanwhile, they could peruse the “crème de la crème of exclusive international leather goods”, along with watches, perfumes, clocks and jewellery from firms such as Yves St Laurent, Gucci and Cartier in the elaborate Bond Street Boutique. Further down the street, they could watch skilful glass blowers demonstrating their art in the Glass and Ceramics Shop, where they could buy chinaware from the likes of Coalport, Aynsley and Wedgwood. Toyfair offered an “Aladdin’s Cave” of toys and games, while World Bazaar sold such exotic items as Polynesian lampshades, Russian dolls and Chinese lacquered boxes. The Athena Shop offered postcards, birthday cards and framed pictures, while guests could hire a camera for free from the Film Shop. 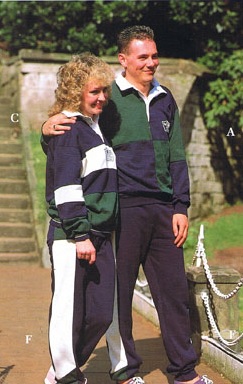 Elsewhere in the park, the farm hosted the Windmill Souvenir Shop, housed in a faithful recreation of an agricultural landmark. The park even sold its own range of leisureware – dubbed “The Alton Collection” - which was “specially commissioned from one of the country’s top fashion design studios to ensure quality and durability”. Each unisex design – available via mail order as well as in-park – carried a unique Alton Towers designer label, and was available in a “series of fashionable colourways”.

For many theme park visitors, it's a point of pride to be able to prove to their friends that they have braved a towering roller coaster or survived a soaking on a log flume. Alton Towers was quick to pick up on this trend, and during the 1980s guests were awarded “ride certificates” as lasting evidence of their bravery.

What was really needed, though, was photographic proof. These days, all of the most popular rides at Alton Towers offer guests the chance to purchase an on-ride photo, at extremely lucrative prices (a fridge magnet from The Smiler, for example, costs some £10). Striking a pose for the camera has become an essential part of the ride for groups of teenagers, anxious to demonstrate that they are capable of looking good even as they race through a vertical loop or plummet towards a watery pool below. They can be often seen gathered around the screens at the ride’s exit, pointing out the expressions on their friends’ faces.

It wasn't always quite so straightforward, though. In the park’s early years, guests would be handed a small slip on which was printed a reference number. After providing their name and address, they would wait for days for their (as yet unseen) photo to arrive in the post. It was not uncommon for them to subsequently discover that the image was actually that of another group of guests entirely. 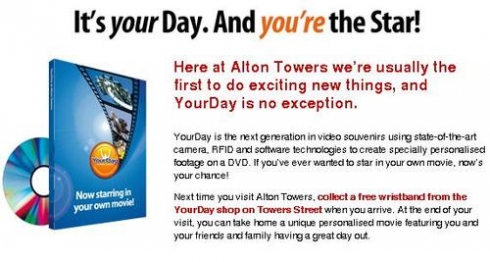 YourDay was not a hit with Alton Towers visitors.

With technology moving on, it was only a matter of time before a video version of the on-ride photo was introduced. The first hint of this came in 2006, when the Sunday Express reported that Alton Towers was planning to tag and track its guests using a network of “Big Brother cameras”. The ominous report claimed that visitors would be “watched” as they navigated the park, with goals including cutting crime and tracking lost children.

Even if the original aims of provider Venue Solutions were somewhat ambitious, the reality was more commercial and slightly less invasive of guests’ privacy. YourDay eventually launched in 2007, capturing footage of guests as they rode on Air, the Corkscrew, Congo River Rapids, The Flume, Nemesis, Oblivion, Rita and Spinball Whizzer. Wristbands equipped with Radio Frequency Identification (RFID) tags were used to pinpoint guests as they whizzed past the cameras. At the end of the day, guests could pick up a personalised DVD for £19.99 from the YourDay store on Towers Street.

Alton Towers had high hopes for the YourDay system, and by 2008 Venue Solutions shares had soared from 0.35p to 0.88p. The system was set to be expanded into other parks in continental Europe and Australia, and the future looked bright.

Unfortunately for the park and its technology partner, YourDay didn’t quite capture the public’s imagination as they had wished. This wasn’t helped by a delayed launch, with the full line-up of attractions not being fully supported until 2008. Some guests also complained about the amount of "stock" footage that was mixed in with the actual video of them enjoying the rides. By March 2009, the supplier had gone bust and YourDay was no more.

Alton Towers hasn’t yet given up on video souvenirs altogether, though. By 2011, it was again selling footage of riders on the Air roller coaster, although inflation had seen prices rise to £12 for just this single attraction.

The installation of Nemesis in 1994 saw then-owner Tussauds branching out into new fields with merchandise relating to the ride. In many cases, the aim was not simply to raise cash to claw back the enormous cost of installing the coaster, but to promote the Nemesis brand both in and out of the park.

The elaborate backstory to the ride, long since forgotten by most riders, is based around an alien that was discovered when the site was excavated, and subsequently pinned in place by the masses of steel that make up the coaster. It was available in comic book form from the Nemesis store, and has since become a collectors’ item.

Not content with riding the coaster and taking it in its plotline, though, guests were also able to literally "taste" the Nemesis experience. Evidently, the taste of Nemesis was blackcurrant and liquorice, for this was one of the flavours of "Nemesis Cola" that were on offer as part of a partnership with Coca-Cola. Sold both inside and outside of the park, the fizzy beverage was available until 1996.

The marketing campaign for Oblivion in 1998 was just as extensive as that for Nemesis four years earlier. Tussauds had lost none of its flare for unusual and quirky ride-related merchandise during the intervening period, and Oblivion launched with an even more bizarre array of branded products that its predecessor.

While it did not revive its partnership with Coca Cola, Alton Towers instead enlisted Lynx, the popular brand of deodorant. Naturally, guests waiting to plummet over the edge of Oblivion’s vertical drop would be perspiring heavily. Luckily, the ride’s shop, X-Sell, was on hand to sell them various different varieties of antiperspirant, including "Rush" and "Zero-G". Again, the promotion extended well beyond the park, and major chemists such as Boots offered the product. There was no escape from Oblivion in the summer of 1998. 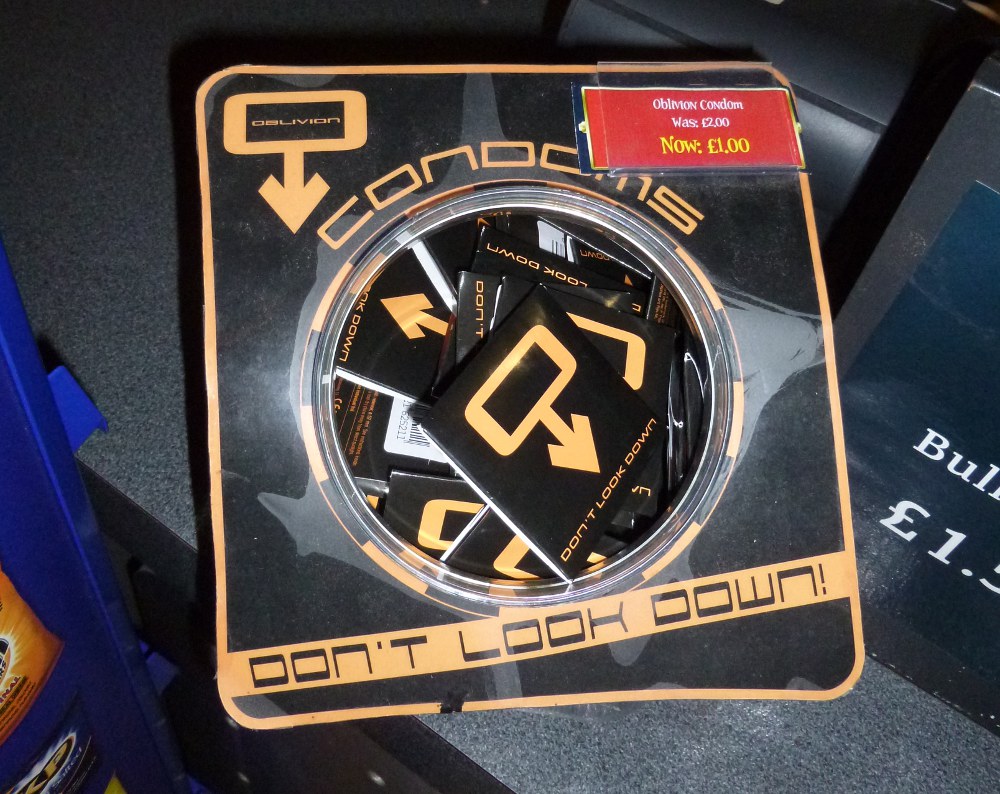 Oblivion condoms are still on sale in the ride's shop.

Tucked away elsewhere in X-Sell, randy Alton Towers fans could find an even greater treat – and one that brand-conscious rivals such as Disney would surely never contemplate. Designed for a different type of "ride" altogether, the Durex-manufactured Oblivion condoms were available for just £1 per pack. Evidently, the feeling of soaring through the air is just as likely as dropping into Oblivion to arouse theme park-loving couples, as Air also featured its own range of condoms when it debuted in 2002. Who knows how many discarded wrappers from these limited-edition family-planning aids can be found strewn around the park’s gardens.

I'm getting very excited about this book now- good luck with it Nick! We all can't wait to read it.

The YourDay video was a very interesting concept. The on-ride DVD craze has swept the US for sometime, but in the UK it didn't really catch on despite Alton's best efforts.

I can remember the DVD, and the cameras were perhaps not positioned in the best places to capture a full on-ride experience. What you ended up with was basically a huge Alton Towers promotion video that you could spot yourself in occasionally- great for coaster fans, not the best memento for the average Alton Towers guest.

Hopefully one day the technology will improve and YourDay will be re-born into something worth-while in the future. It's definitely a unique and neat idea.