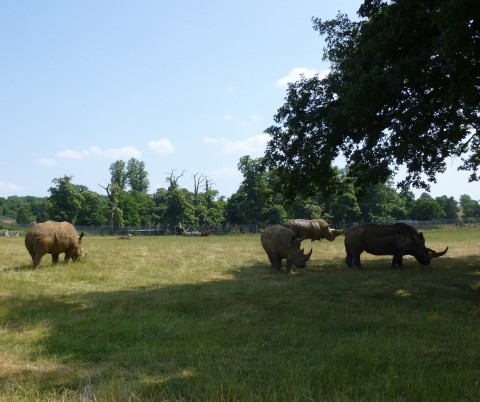 I've recently released my new book, Tales from the Towers, which tells the story of how Alton Towers developed from a barren patch of land holding a small hunting lodge into the UK's most popular theme park. We're serialising select parts of the book on Theme Park Tourist, along with photos that didn't make it into the print edition. In this fifth article, you can learn how Tussauds planned to build a major theme park at Woburn Abbey to rival the Towers.

A quick note: the images in this article are photographs of the original plans for Woburn Abbey. These are now stored on micro-fiche, so the quality is very poor.

Back in the late 1980s, the Tussauds Group was still a relatively small company, with an annual turnover of around £30 million. Its owner Pearson, though, was a multi-billion pound company. It wasn’t interested in settling for second-place in the UK theme park market behind Alton Towers – it wanted to become the market leader.

After discussions with local planning authorities, it soon became clear that the company couldn’t achieve that goal at its first theme park, Chessington World of Adventures. The restrictions on the number and size of attractions that could be installed on the site were simply too severe. Instead, the company began to hunt for a second site, where it hoped to build the UK’s number one theme park.

On the radar was Woburn Abbey – like Trentham, a site with a number of parallels to Alton Towers. Determined to keep the property in his family's hands, the thirteenth Duke of Bedford followed an Alton Towers-style approach and turned it into a tourist attraction. By 1970, a safari park had been installed on the site and it quickly became very popular.

Ray Barratt, the Tussauds director, was a former General Manager at Woburn and well-acquainted with the Duke’s son, Henry Robin Ian Russell, who was by now running the estate. Ride designer John Wardley recalls that on a return trip from Corby to London, Barratt suggested calling in at Woburn. Following several further meetings, Tussauds and the Duke’s family agreed to work on plans to convert the site into a "mega park" that would attract 2.25 million visitors per year – on a par with Alton Towers.

Armed with Pearson’s millions, Tussauds developed ambitious plans for the Woburn site. As at Chessington, some animal attractions would remain, but major new rides would be added alongside them. Just as he had for Tussauds' first theme park, Wardley drew up a masterplan for the Woburn site, which was to be dubbed "Woburn Festival Park". 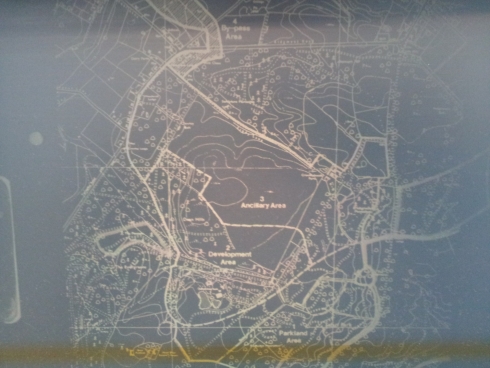 Overall plans for the Woburn Abbey site (click to enlarge).

The park would sprawl across a total area of 525 acres, although only 131 of these would house the theme park itself. The park was expected to attract upwards of 20,000 visitors on peak days – significantly more than the existing safari park. Seven themed areas would be included, each designed to cater for the entire family. Tussauds promised that the park would enable visitors to "escape for one day into a different world that is clean, safe and has adventure, wildlife and some tranquillity." 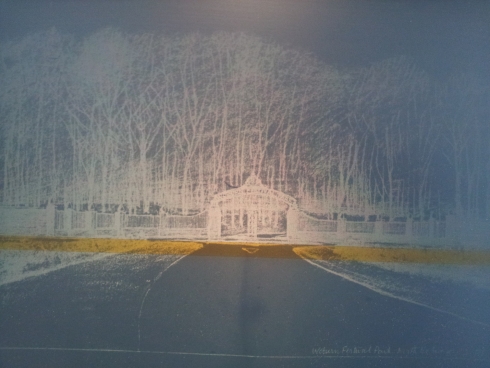 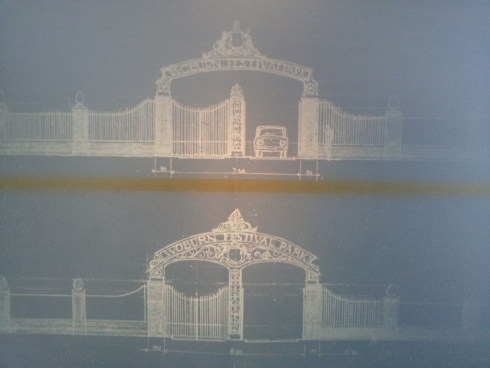 Another view of the proposed new entrance (click to enlarge).

Wardley's outline plan for the park offers an insight into what would have been on offer. Arriving by car, guests would have time to "forget the world outside" as they drove along the approach roads to Festival Park's entrance. After buying their tickets, they would pass through a leafy square onto a "village street" beyond. This would be lined on either side by shops, visitor facilities and a restaurant. Bunting would hang everywhere, and the street would have the "atmosphere of a carnival", with street-theatre, clowns, jugglers and "mad games" to entertain the crowds. Covered arcades on either side would allow movement in wet weather. 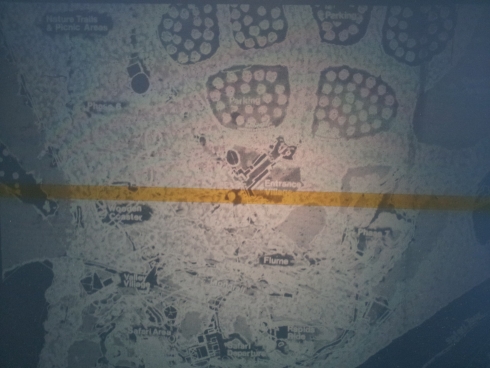 An overview of the proposed theme park (click to enlarge).

Reaching the end of the street, visitors would walk through a grove of tall oak trees with thick rhododendrons to block out the views on either side. Within this woodland, they would see an enormous adventure playground stretching out in front of them, with people climbing on platforms, crossing rope bridges and plummeting down slides. 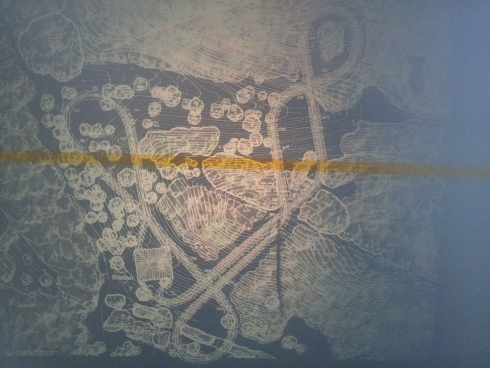 The basic layout of the wooden coaster (click to enlarge). 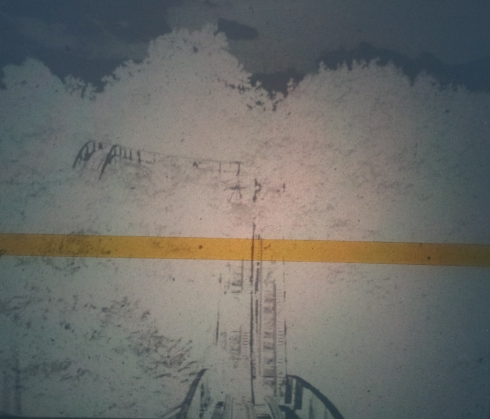 Further on, they would hear the sounds of riders on a wooden roller coaster, although this would be concealed by dense vegetation until they were much nearer. Even up close, the majority of the coaster would be hidden by two steep valleys and dense vegetation. "For those brave enough to ride it," Tussauds promised, "[the coaster] will be an unforgettable experience."

Plans for the valley, showing the relative locations of the wooden coaster, valley village and entrance village (click to enlarge).

Moving down into the valley, guests would come across another village overlooked by a "sinister house", which would accommodate a dark ride. While this sounds conceptually similar to the Haunted House that was subsequently built at Alton Towers, Wardley describes it as "nothing more than a name on a plan". Outside, a runaway train based on that at Chessington would leave the village for a "hair-raising" trip across the wooded valley and back.

Next, visitors would come to the Safari Area, which would features lakes and waterfalls at its centre populated by flamingos and other waterfowl. A family restaurant, decorated with creepers on round poles, would look out over the "generously planted" lakes, offering an intimate dining experience. 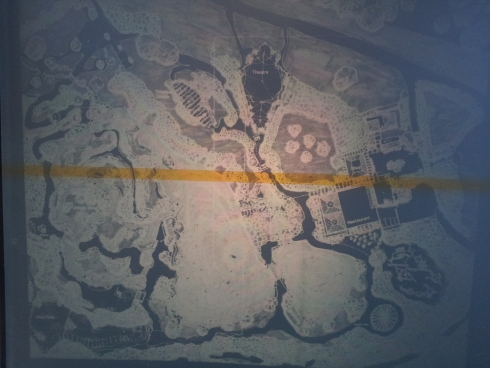 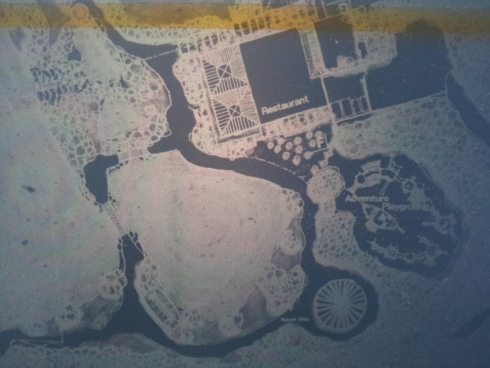 A closer-up of the adventure playground and what appears to be a carousel (click to enlarge). 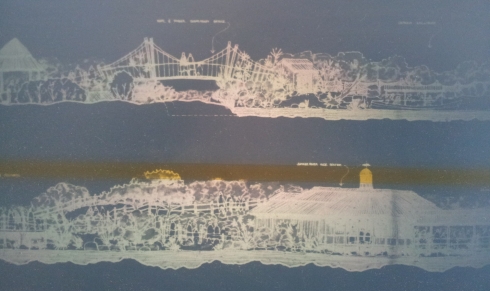 From the main lake, "Jungle Queen" boats would take riders on a trip past a number of animals, with paths allowing a closer look. For younger guests, there would be a "Safari Jeep" ride and an African Village display of juvenile and domestic animals. There would also be an indoor wildlife presentation and a new tropical house. 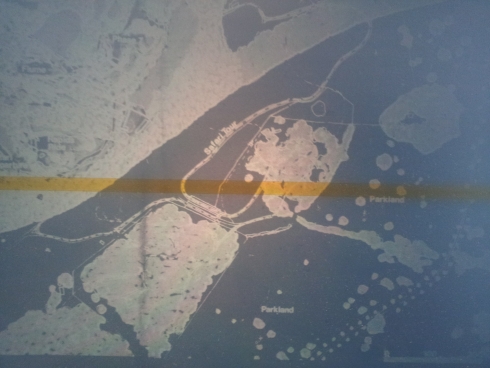 Plans for the updated Safari Tour area (click to enlarge).

Much of the former safari park would remain in place, with guests touring it in land trains that left from the outskirts of the Safari Area. A monorail would give an overview of the animal enclosures as well as providing transportation back to the entrance and other attractions.

Also overlooked by the monorail would be a rapids ride, occupying the position of the former safari park car park. This would flow through a series of densely-planted rocky gorges, with overlooks and bridges allowing people to enjoy the area whether they wanted to ride or not.

Plans showing the location of the log flume and a nearby "round ride".

Returning to the valley, a log flume ride would draw its water from newly-made ponds. The flume's circuit would climb up the contours of the valley through pine plantations, before splashing back down into the ponds. Once again, paths and overlooks would make this "a spectacle to enjoy both on and off the ride". A Pirate Ship-style flat ride would take off from the water level and swing through the trees.

After exhausting themselves in the theme park, guests could take advantage of large areas of previously off-limits parkland that would be set aside for nature trails and a picnic area.

The park, as described above, would be built in five stages over the course of five years at a cost of around £50 million. Two further phases were also planned to bring the park up to full capacity, although the rides that would be included in these had not yet been finalised. Phase 6, though, would have included “moderately-sized dark ride structures”.

Legendary American designer Curtis D. Summers was working with Wardley on the design of the wooden roller coaster, which would have featured dual, "racing" tracks. Wardley was also collaborating with Arrow on the design of a steel roller coaster, presumably to be added to the park during one of the later stages. Other attractions referred to in the plans include a tea cup ride, a "Big Apple Coaster" and an old-fashioned carousel. With Tussauds aiming for outline planning consent, though, Wardley says that "all the plans for Woburn were just outline concepts, and none were worked up in any detail."

Tussauds submitted its initial application for outline planning consent on June 6, 1989. It faced intense opposition, with dozens of letters of objection being received by Mid-Bedfordshire District Council. 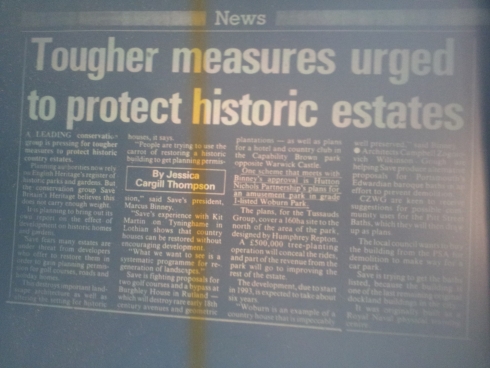 The response from the council was emphatic. The theme park, it said, would "conflict with the intentions of the Local Planning Authority to conserve areas of attractive landscape and prevent development that would adversely affect their character." Not only that, but it would "detract from the amenities and quiet enjoyment of residents living within the vicinity of the site", would create too much traffic around Junction 13 of the M1, would increase local traffic to "unacceptable levels" and generate too much noise. "The proposed theme park would have a seriously adverse affect upon historic parkland of outstanding importance," was the council’s summary. Seemingly, there was no chance of Tussauds ever gaining planning consent to build its “mega park” at Woburn Abbey.

Instead, it turned to Alton Towers. In March 1990, Pearson placed 11 million shares at 655 pence, using the funds to purchase Alton Towers for £60 million. The park had made a profit of just £3 million the previous year, but it had assets totalling £60 million, as well as permission to build a hotel and chalet complex worth £8-10 million. Tussauds would take it in a new direction, moving away from thrill rides and targeting families.