Tales from the Towers: How the Corkscrew catapulted Alton Towers to prominence 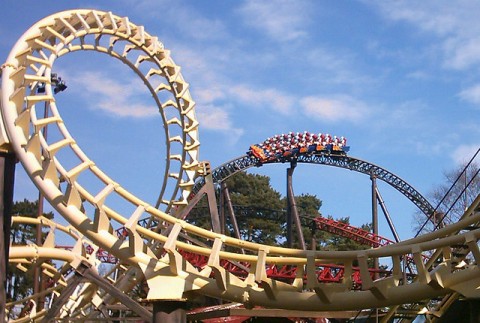 I've recently released my new book, Tales from the Towers, which tells the story of how Alton Towers developed from a barren patch of land holding a small hunting lodge into the UK's most popular theme park. We're serialising select parts of the book on Theme Park Tourist, along with photos that didn't make it into the print edition. In this second article, you can learn how the iconic Corkscrew helped established Alton Towers as leading tourist attraction.

Over the course of the 1970s, property tycoon and entrepreneur John Broome gradually took control of Alton Towers. Determined to turn it into a "stately home that's anything but stately", he drew up plans to transform the estate into Britain's first theme park.

Having formulated his plans and secured financing, Broome decided that 1980 was to be Alton Towers’ first year as a theme park. He closed the park's existing fairground, along with 30 of Alton Towers bars. The latter move was designed to stop dads "slipping off for a drink", helping to establish the new venture as a place for the whole family to enjoy together.

The biggest change was to the park’s entrance fee, which rose to £2.50 for adults and children alike. However, rather than guests having to pay for each attraction individually, all of them were now included in the single, flat price. While Disney had introduced a similar system of "unlimited use" tickets in the late seventies as it prepared to open Epcot at Walt Disney World, the concept was revelation in England. "You can budget for a day," Broome said, "and ride as many times as you like."

To headline the new venture, Broome needed a major attraction that could spearhead the park’s marketing campaign and stand out as being unique within the UK. Disney had established the concept of an E-Ticket attraction (one that, before unlimited use tickets were introduced, would cost more to ride than others), but building the kind of custom, vastly expensive dark rides that dominated the Disneyland line-up was not a viable option for a start-up theme park in the Staffordshire countryside. Nor was the park’s budget likely to stretch to cover the impressive theming that surrounded Disney’s roller coasters, such as the Matterhorn Bobsleds and Space Mountain.

Instead, Broome was looking for a ride that he could lease, rather than purchase. This ruled out the custom-designed coasters that were being produced by firms such as Arrow Development for Disney and its competitors in the US. He had also identified a site not far from the old fairground (in the area now known as the Dark Forest) where the attraction could be situated, and this was limited in size. The ride would have to fit into its not-too-spacious footprint.

Broome turned to Dutch firm Vekoma. Founded as a manufacturer of agricultural and mining machinery in 1926, it was by now producing “off-the-shelf” amusement park rides for the travelling funfair circuit in Europe. In the late 1970s, it was making its first tentative steps into the roller coaster market, with the double-looping MK-1200, better known as the Corkscrew. Designed to be put together and taken down quickly, it was also of a relatively compact design. 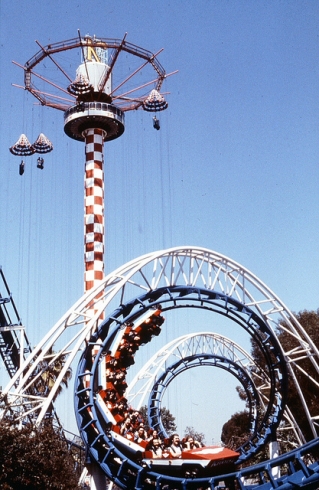 The first Corkscrew roller coaster had debuted at Knott’s Berry Farm, not far from Disneyland, in 1975. Built by Arrow Development, it is widely credited as being the first modern roller coaster to feature an inversion. In fact, it featured two, in the form of the signature "corkscrew" element. Vekoma’s ride was very similar, adapting Arrow’s design to meet the needs of travelling showmen.

Alan Brown, working for Broome as Alton Towers’ General Manager at the time, travelled to Vekoma's factory in Vlodrop, Holland. There, the first prototype of the Corkscrew was waiting for him in the yard. “It hadn’t been painted, so it was all rusty and looking rather terrible." Still, Brown was satisfied by the experience on offer: "It was quite a thrilling ride, for those days."

In 1979, Broome persuaded a group of German financiers to fund the installation of a Corkscrew model at Alton Towers, at a cost of £1.25 million. Work to prepare the site began three days before Christmas, with the aim of getting the ride open in time for the start of the first park’s season as a theme park in April 1980. The coaster itself arrived in pieces in dozens of containers shipped from Holland, and construction was completed in time for the busy Easter holidays. 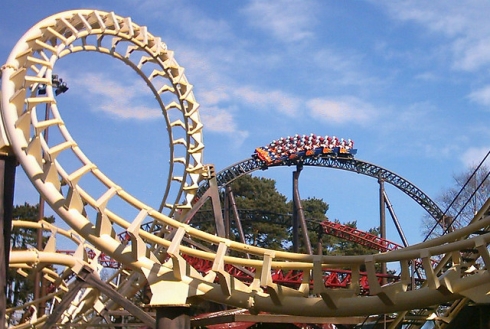 Broome was determined to make a big splash with the Corkscrew, and Alton Towers billed it as "Europe’s first double-looping roller coaster". This wasn’t strictly true: Vekoma had already sold an identical model to German duo Oskar Bruch and Fritz Kinzler, which had operated at the Annakirmes fair in Düren, Germany in August 1979 before being sold to Traumlandpark. Another version of the ride, dubbed Tornado, was also installed at Walibi in Belgium in 1979. Meanwhile, nearby Blackpool Pleasure Beach had been inverting riders twice on its Revolution roller coaster for a year before the Corkscrew opened – although, technically speaking, they passed through the same loop twice, in forwards and backwards directions. Broome could, though, justifiably claim that the Corkscrew was the first ride of its type in the UK.

April 4, 1980, the opening day for the Corkscrew, was a red-letter day for Alton Towers and its ambitious chairman. It was Good Friday, and holidaymakers were ready to celebrate with a ride on the UK’s newest roller coaster.

Les Davies, the former Alton Towers archivist, remembers: "People were trying to climb over the fences and demanding to be let in. One car left, and another one would be let in. It was unbelievable. There was something like a 6 to 9 hour queue just for the Corkscrew. The roads were completely blocked back to Derby and Stoke. The police were ringing up saying they had shut the M6 and the M1. We closed about 1 o'clock, we'd estimated 40,000 [visitors in the park] with people still outside."

The chaos continued throughout the Easter weekend. "On the Bank Holiday Monday we had to close the gates, because we had that many people trying to get here to see the Corkscrew," remembers Brown. "We just couldn't cope with them." The Corkscrew’s popularity showed no signs of dwindling during its first season, when queues as long as five or six hours to ride it were commonplace.

The impact on attendance at the park was immediate. "We went from just over 500,000 a year in the 1970s to just over 1 million in 1980, so we'd more than doubled the numbers of people coming to the park just by putting the Corkscrew in,” says Brown. “It brought the leisure industry to the forefront in the UK." Of course, those people were now paying more to get into the park, under the new unlimited ride ticket scheme.

Awaiting this flood of guests was a roller coaster that would seem relatively tame by today’s standards, but was completely new – and rather intimidating – for the UK public of 1980. After boarding the train and pulling down the over-the-shoulder restraints, riders were carried to the top of 75-foot lift hill. As they rounded a bend at the top, they were treated to stunning views of Alton village and beyond. Most, though, were pre-occupied with anticipation of the 68-foot first drop that awaited them. Plunging to the bottom of this, the train reached a top speed of 44 miles per hour, before racing around a helix and into the signature double corkscrew element. The remainder of the course was nondescript, with several further turns and helices before it pulled back into the station. 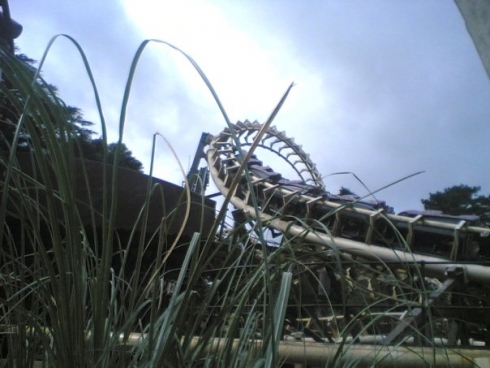 The Corkscrew wowed UK crowds, who were unused to large steel coasters.

Riding the Corkscrew became a point of pride for thrill-seekers, who wore the experience like a badge of honour. Among the crowds on the opening day was Andy Hine, then aged 13, who went on to found the Roller Coaster Club of Great Britain and to receive an MBE for services to tourism. He recalls: "I was absolutely desperate to be there when it opened because I’d never been upside down before." Broome himself was relieved: "We're very lucky to be able to open it as they are very much in demand now." Indeed, an identical ride would open at Yorkshire’s Flamingo Land three years later, though it would never carry the same cachet.

Many riders recall the Corkscrew’s loud chain-lift, which could be heard from some distance away due to the motor being located at the top of the lift hill. Even children who were too small to ride it would watch in awe as the train raced through the corkscrew.

The image of the Corkscrew became part of popular culture, with a digitally rotoscoped version featuring in the opening title sequence for ITV’s Top of the Pops rival, The Chart Show. An image of a train midway through the double corkscrew was used as the cover art for dance act The Prodigy's Everybody in the Place.

The Corkscrew remained in place for some 28 years, with the only minor change being a slight "retheme" to fit in with the surrounding prehistoric Ug Land area when it was introduced in 1999. In total, it carried over 43 million guests around its circuit before finally being shuttered in 2008.

By then, it had gained a reputation for being extremely rough, with guests banging their heads against its uncomfortable restraints. John Wardley, who helped design its replacement, recalls: "When the Corkscrew was first put in by John Broome, it was seen as the ultimate terror machine, a real challenge to ride. It no longer was that. Research indicated that although there was a lot of nostalgic value to the old Corkscrew, it was not up there with the top rides any longer. It was still in excellent condition, but it was time for the ride to go into retirement."

Some parts of the coaster were sold, with a carriage from one of its trains fetching £7,300 on auction website eBay. The buyer, John Taylor, intended to display it as a garden feature. The remainder of the trains were moved to Heide Park in Germany, which shared an owner with Alton Towers by this time. They are still in use on the Big Loop, the park's own version of the Corkscrew. 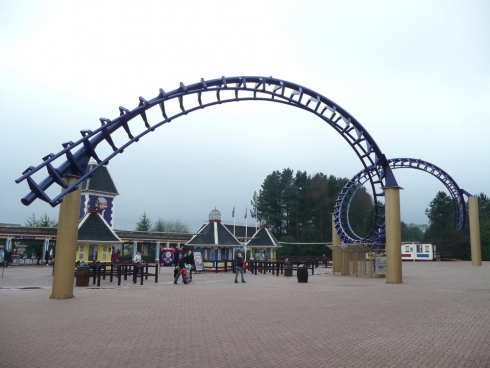 Alton Towers, though, did keep hold one piece of its first major ride. The famous corkscrew element – repainted purple on the orders of local planning authorities – was installed as a monument in front of the park's entrance, where some confused guests initially mistook it for a new ride as they arrived on the monorail.