Tales from the Towers: The 19th century Grand Fetes that drew huge crowds to Alton Towers 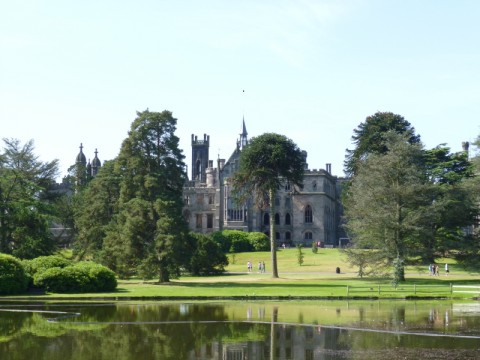 I've recently released my new book, Tales from the Towers, which tells the story of how Alton Towers developed from a barren patch of land holding a small hunting lodge into the UK's most popular theme park. We're serialising select parts of the book on Theme Park Tourist, along with photos that didn't make it into the print edition. In this first article, you can learn about the amazing Grand Fetes that drew enormous crowds to Alton Towers back in the late nineteenth century. You'll wish you were there!

From its humble beginnings as the site of a modest lodge, Alton Towers had been transformed into a magnificent estate boasting some of the finest gardens in Europe by the fifteenth and sixteenth Earls of Shrewsbury. By the latter part of the 19th century, though, things were heading downhill fast. The house had been stripped bare by the Great Sale of 1857, which saw more than 4,000 items sold off to the highest bidder. However, the growth of rail travel opened up the chance for the Towers to become a major tourist attraction.

It was the twentieth earl, Charles Henry Chetwynd-Talbot, who really seized upon the idea of attracting huge crowds to the Towers by putting on lavish celebrations. Having taken on the title in 1877, he worked with organisers James Pain and Sons of London to host a series of "Grand Fetes" throughout the late nineteenth century and early twentieth century. These were major events, designed to attract tens of thousands of people.

While the Towers and gardens themselves remained popular attractions, Pain and Sons introduced a number of other elements to entertain the vast crowds. This included music and dancing, horse-jumping competitions, donkey racing and circus-style novelty acts. The Towers would be illuminated by thousands of lights in the evening, before a spectacular fireworks display took place.

Pain and Sons scoured the globe for unique performers to appear at the fetes. In 1892, for example, "Victorina, the strongest athlete on earth" demonstrated his ability to catch a cannon ball fired from a "real cannon with real gunpowder". A year later, the line-up included Sante, "the man with the iron head", whose act saw "granite blocks (obtained locally) broken on his head by sledge hammers". Mademoiselle Onri, meanwhile, slid down a high wire over the lake in front of the Towers, suspended only by her hair. Over the same lake, Ella, Zuila and Lulu – three “charming” ladies – walked along a wire 500 feet across and 75 feet high without the aid of a safety net. The second, evening performance of the high wire acts took place in darkness, with the performers illuminated only by limelights mounted on boats on the lake.

Performing animals also played a part in the celebrations. In 1895, the "Three Roys" showed off their "educated dog", a number of "clever dogs" appeared under the direction of Mr. Grosvenor McCart and Mademoiselle Paula "handled several large boa constrictors and crocodiles dexterously". Humans matched their feats, though, with American rifle expert Mademoiselle Winona and the Paddock troupe of trick cyclists also wowing the audience. If that wasn't entertainment enough, guests could look at a collection of instruments of torture, acquired by Lord Shrewsbury during a trip to the Royal Castle in Nuremberg in 1892.

As it does at today's theme park, new technology and trends played a role in the Grand Fetes. This included the operation of an electric searchlight, mounted on the Flag Tower in 1894. A year later, the new craze for "Living Pictures" (theatrical scenes populated by stationary actors who do not speak or move) came to Alton Towers, proving to be "very much to the taste of the lookers on".

The illumination of the Towers was a major undertaking, requiring dozens of Pain's employees to set up over a period of several weeks. The result was spectacular, and could be seen for miles around. By 1894, The Mercury reported that "this is the last time the building will be illuminated, owing to the tremendous work it entails." This proved to be inaccurate, though – a year later, the Towers and grounds were again "illuminated with thousands of fairy lamps of many colours, though not upon so large a scale as customary, by reason of the all-spoiling rain."

Fireworks displays are still a major attraction at Alton Towers in modern times, and guests would gather in huge numbers during the Grand Fetes to witness pyrotechnics such as "batteries of coloured roman candles", "electronic streamers", "swarms of writhy fiery cobras" and "flights of whistling rockets". The grounds would then stay open until late, with the last guests filing out at around 11pm.

Substantial funds were invested not just in laying on the Grand Fete events, but in ensuring that they were marketed effectively. A large, visually striking advert in the August 2, 1901 edition of The Mercury offers a comprehensive preview of that year’s fete:

The Grand Fetes would attract large crowds – in 1894, "on the first day the attendance was very large, and it was estimated that some thirty thousand persons were present." The earl himself was not afraid to engage in a little self-promotion during the fetes, perhaps to remind the attendees of who was responsible for their enjoyable day out. In 1893, "amidst a splendid display of fireworks appeared a colossal portrait of the Earl of Shrewsbury and Talbot, surmounted by the coronet and monogram, 'S.T.' and sported by the motto 'Welcome to Alton Towers'."

The Grand Fetes came to an end in the early twentieth century, and Alton Towers was eventually sold into private hands in 1924. Over the next few decades, it continued to operate as a tourist attraction, albeit with a twelve-year interlude during and after the Second World War.

1974 saw the debut of a new series of annual events that did not quite rival the Grand Fetes in scale and scope, but still pulled in vast crowds. These were the Mirror Days, "garden parties" promoted in the Daily Mirror Newspaper’s gardening section by renowned horticulturalist Xenia Field.

Mirror Days had already been held at other locations, but the first one at Alton Towers on June 16, 1974 proved to be so successful that all of the subsequent ones were held there. Having gained admission for the specially reduced price of 25 pence for adults or 12.5 pence for children, attendees could look forward to a line-up of bands, fancy-dress contests and flower sales.

Ahead of the following year’s event, Field was expecting attendance to be high: "Start early - that's my advice if you're coming to our Garden Party at Alton Towers. There is plenty of room but we're anxious to avoid any build-up of traffic." Field herself was on hand to help sell some 6,000 plants, with "a splendid batch of mixed colours and varieties" on offer. The gardening theme extending to the children's fancy dress parade, with kids asked to dress up as a plant of their choice.

Xenia Field promoted the Mirror Days as part of her gardening column.

Whereas the Grand Fetes had boasted an international line-up of performing artists, there was no mistaking the quirkily British nature of the Mirror Days. This is epitomised by the "wellie-flinging" finals that were the highlight of the 1976 celebrations. More than 25,000 people had entered the Mirror’s contest to prove that they could hurl a Wellington boot further than anyone else, with the twenty finalists doing battle in the grounds of the Towers. Some of the entrants had real pedigree, with the husband and wife international hammer and discuss throwing pair of Howard and Rosemary Payne among the line-up. The winners could look forward to a £250 continental holiday, with tankards for the male finalists and goblets "for the girls".

Celebrity appearances were common, with pop star Scott Fitzgerald, comic Arthur Mullard and football stars Gordon Hill, Howard Kendall and Jimmy Greenhoff among those persuaded to join the festivities. The real stars, though, were the “Supergirls” and “Mirrorbelles” in the beauty pageant, which was billed as the main event. 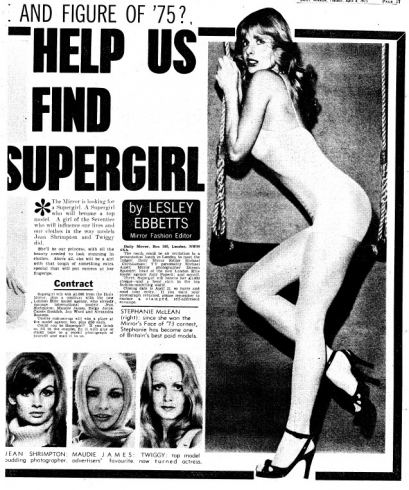 All that was required to enter the Mirror Supergirl contest was to cut out a coupon from the newspaper, fix a recent photograph to it “with glue or sticky tape” and mail it in.

By 1979, the price of admission had almost tripled to 70 pence for adults and 25 pence for children, reflecting the growing roster of attractions. The "Fun Diary" for the day included: 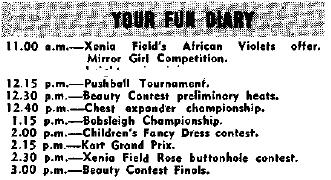 In July 1980, Xenia Field broke the news in her column that the Mirror Days were no more: "I am very sorry that we shall not be able to hold our big day out at Alton Towers this year. The many attractions that have been introduced have made it difficult to accommodate our usual programme. Even though we won't have the pleasure of being with you, I should point out that Alton Towers will still have plenty to offer."

Indeed, Alton Towers did have plenty new to offer in 1980. Driven by the efforts of a controversial entrepreneur, the estate now boasted a flat entry fee that covered all of its attractions, and an iconic new ride was pulling in vast numbers of guests. The theme park era had begun.