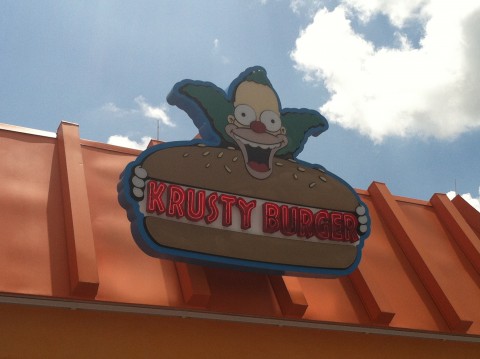 The Simpsons' hometown is open for business at Universal Studios Florida... mostly. While there are still construction walls up in Springfield, the majority of the town is serving guests on a daily basis. Starting at the existing The Simpsons Ride, and working its way down the street towards Kid Zone (or vice versa), the new Springfield area has a little something for everyone. 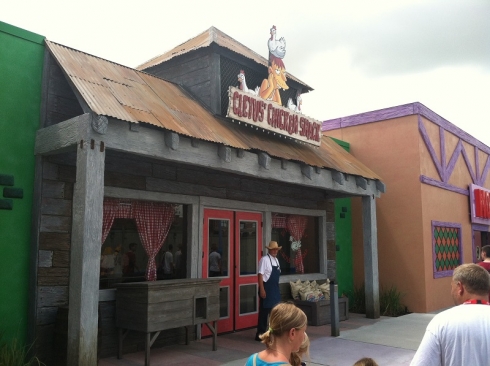 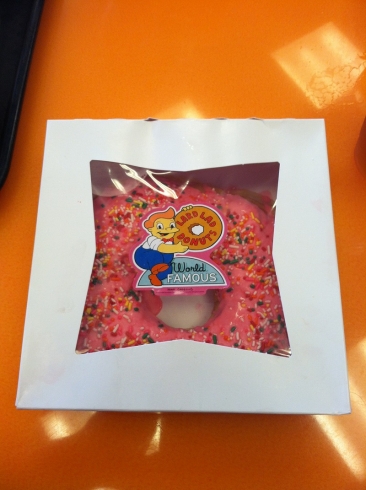 Moving down the street, Cletus's Chicken Shack is the first new restaurant front you come to. Past that is Moe's Tavern and then the Krusty Burger. Past Krusty Burger is the Android's Dungeon. On the television show the Android's Dungeon is Bart's comic book store of choice. At Universal Studios Florida, however, the store is just a facade for the newly-remodeled restrooms. To be fair, both the Krusty Burger and Cletus's Chicken Shack are facades as well, but more on that later. 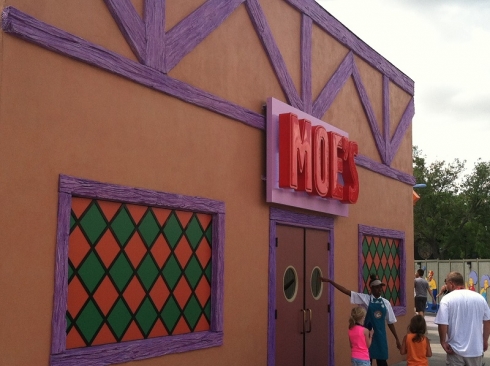 When you step into Moe's Tavern you really feel like you've entered the living version of this iconic cartoon bar. The walls are decorated with Springfield sports team memorabilia, there's a "Love Tester" machine in one corner, and a busted up television hangs above the bar. Theres even a photo op with a life sized Barney Gumble, who is eyeing his empty beer mug as if to say "Hey. Why is my beer gone?" Speaking of beer, there is Duff Beer, actual beer mind you, available for purchase in a special Moe's Tavern pint glass. Want to try a Flaming Moe? Head over to his drink stand and pick one up. 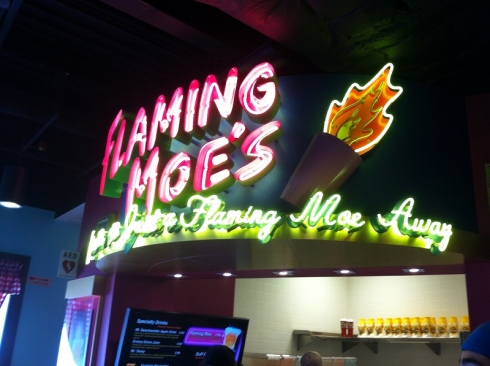 The Flaming Moe's drink stand is located behind the facade for Cletus's Chicken Shack, along with several other restaurants in a stretch known as Fast Food Boulevar. Those restaurants are Krusty Burger, The Frying Dutchman, Cletus's Chicken Shack, Luigi's Pizza, and Lisa's Teahouse of Horror. Don't worry though: that last one is only scary if you're really in the mood for meat. This is another place where you can buy a giant pink frosted doughnut. 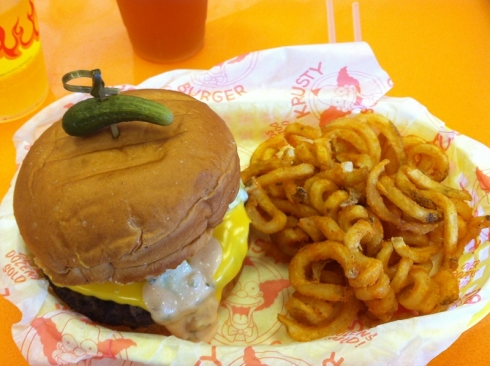 Aside from that donut, one of the most iconic items available in this food court comes from the Krusty Burger. This counter offers its namesake, the Krusty Burger, which is a 1/3 pound hamburger patty with lettuce, tomato, cheese sauce, and secret Krusty sauce paired with curly fries on the side. While at first I was worried that this would be another standard theme park hamburger, it is actually far from it. It was quite delicious, if somewhat messy. Grab plenty of napkins for the drippy cheese sauce and pink-ish special sauce and you’re good to go 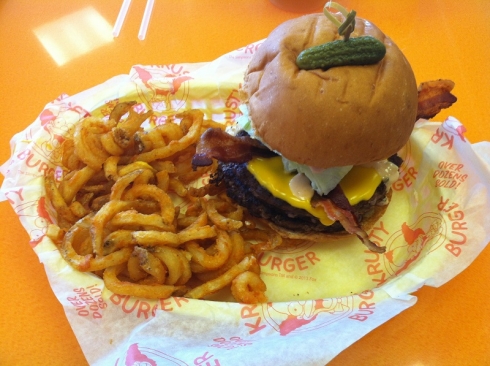 If the Krusty Burger just isn’t enough beefy goodness for you, a larger version of this is the Clogger Burger, which is two patties, cheese sauce, secret sauce, lettuce, tomato, and bacon. Lots of bacon. My husband is a big burger guy, and has the ability to eat quite a bit, but the Clogger stopped him in his tracks. Also available at the Krusty Burger is a veggie burger, a Sideshow Bob hotdog and the Ribwich -  a sandwich featuring rib tips and BBQ sauce. 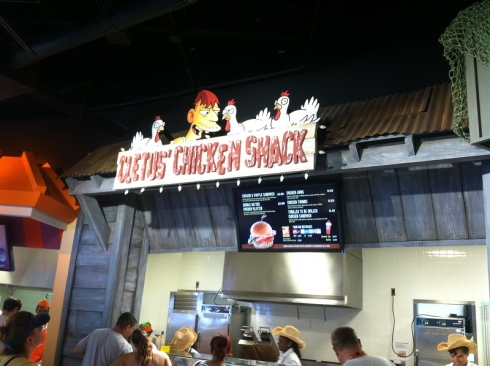 Cletus’s Chicken Shack will appease any poultry lovers in Springfield, as long as health isn’t a big concern. The chicken is double battered and crusted in cornflakes.The highlight of this menu is the chicken and waffle sandwich, available with maple syrup mayo either on the sandwich or on the side. Though Cletus is a staple on the show, his Chicken Shack  is a creation exclusive to the Universal Resort (as of this writing). 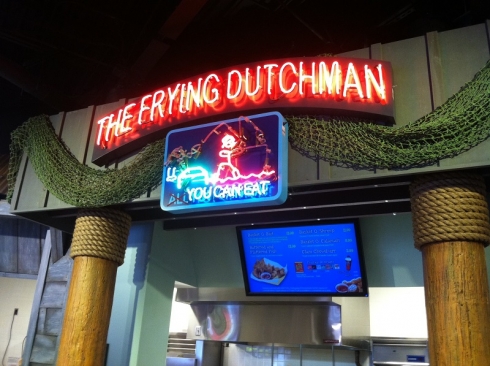 The Frying Dutchman is a seafood restaurant featured on the show. On Springfield’s Fast Food Boulevard this counter serves a Basket O’ Bait featuring cod, coconut shrimp, fried calamari, tater tots, and hush puppies. You can also have a less-inclusive Basket O’ Shrimp or Basket O’ Calamari. Battered and Plattered Fish and Clam Chowd-arr round out the menu. 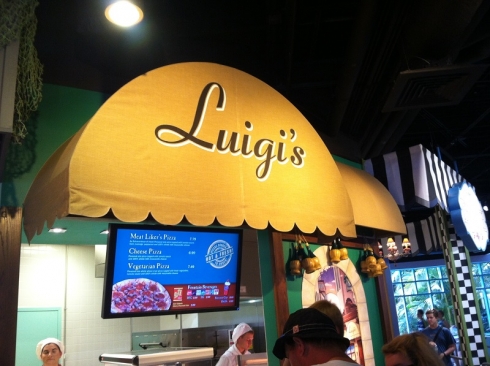 If you’re in the mood for Italian, Luigi’s Pizza offers several types of pizza including a vegetarian option with a whole wheat crust. This, too, is a restaurant pulled straight from the show.

While the majority of the dishes in this food court are predictably greasy and fat-filled, you will find some lighter options in Lisa’s Teahouse of Horrors. This area features pre-made choices including salads, hummus, and fruit. The teahouse itself is not from the show, but rather a clever play on words referencing the annual Treehouse of Horrors episode featured every Halloween. 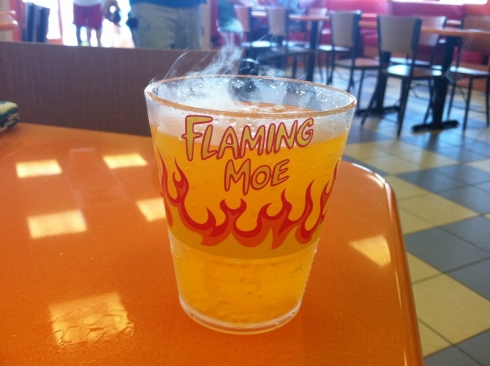 Once you’ve made your food selection, all that’s left is to find something that will slake your thirst. This food court offers all the standard soda options as well as a few special treats. At the Flaming Moe’s counter you can indeed get a Flaming Moe. This non-alcoholic drink is similar to orange soda. It comes in a special cup that holds dry ice in the bottom so the beverage fizzes and smokes for the first few minutes. You can also get a Mt. Swartzwelder Apple Drink, Groovy Grove Juice, Mr Teeny, or Duff Beer. All the food counters here offer Buzz Cola, which is a cherry flavored cola drink that tastes very similar to Coke.

No matter what you choose, you can enjoy your Simpsons-inspired bounty in a dining room filled with images from the show. Televisions throughout the room loop a short series of Simpsons clips. While this creates a fun atmosphere, the loop is a little too short and you’ll hear the same few clips many, many times throughout your meal. Overall, Fast Food Boulevard is a fun and delicious new addition that’s a must-see in the new Springfield at Universal Studios Florida.