Review: Under the Sea - Journey of the Little Mermaid at Disney's Magic Kingdom 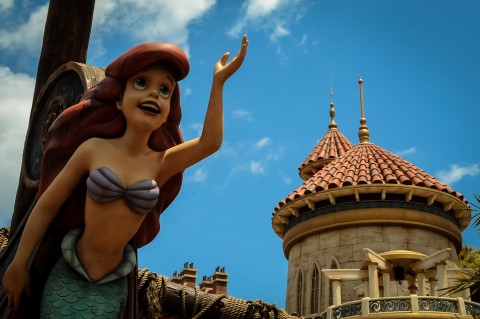 Opened in 2012, Under the Sea - Journey of the Little Mermaid was one of the first attractions in the New Fantasyland, which opened the same year. Though Fantasyland has been at the Magic Kingdom since 1971, the 2012 addition signified the largest expansion of the land since the park opened. Included in the opening of the New Fantasyland was Storytime with Belle, the Be our Guest restaurant, and Storybook Circus. Dumbo the Flying Elephant has been relocated to the Storybook Circus part of the land, and has been paired with a duplicate ride that spins in the opposite direction. The twin Dumbos effectively double the amount of guests the attraction can entertain each hour. Also included in the Circus is a water play area for younger children themed to the animal cars of the circus train.

Spoiler warning: this review contains plot details for Under the Sea - Journey of the Little Mermaid.

As you make your way into the newest area of Fantasyland and past Belle’s cottage and Beast’s castle, the landscape changes into a more nautical locale. The rough cut mountain range slowly becomes vast, seemingly damp caverns that house Ariel and her friends. Across the street and behind what are currently large construction walls is Prince Eric’s castle, though still unfinished. This location will eventually house a Little Mermaid themed store. Down from the main entrance to the Under the Sea attraction is Ariel’s Grotto. A relocated holdover from before the New Fantasyland’s construction, Ariel’s Grotto is home to the Little Mermaid herself, where children both young and old can meet Ariel in the scales. Before the New Fantasyland began it’s construction, Ariel’s Grotto could be found on the grounds that used to be home to 20,000 Leagues Under the Sea. In fact, the Fastpass queue for Under the Sea - Journey of the Little Mermaid features a cavern wall that has a bit of damage that is shaped oddly like a Nautilus submarine. 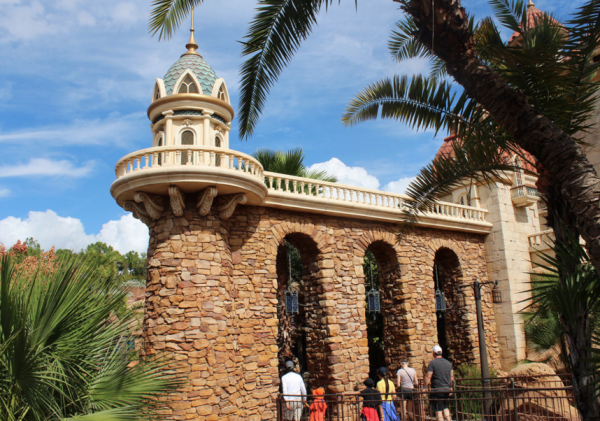 The standby queue for the attraction is home to Walt Disney World’s new favorite way to distract guests from long wait times - the interactive queue. All through the line are activities for bored little hands to touch and play with. The most prevalent game involves animated crabs rolling out various everyday items that match a real world version of the same item. For example, a guest may approach an open diving helmet with a pair of eyeglasses sitting on top. The animated crab may roll out, say, an empty spool, and then look at you. A simple wave of your hand will tell the crab that the item isn’t what you’re looking for, and he’ll roll it back out. Then the crab will bring in a pair of glasses and, with the simple nod of your head, the crab will take the eyeglasses to a nearby basket. Though this isn’t the most exciting game, there are several variations through the main caverns of the queue and they do help time to pass a little faster while you wait.

One room features Scuttle, the seagull from the movie The Little Mermaid, naming items crabs bring him. And, in true Scuttle fashion, they are named incorrectly. While the audioanimatronic bird is fun to look at, he’s very difficult to hear in the cavern filled with excited guests. 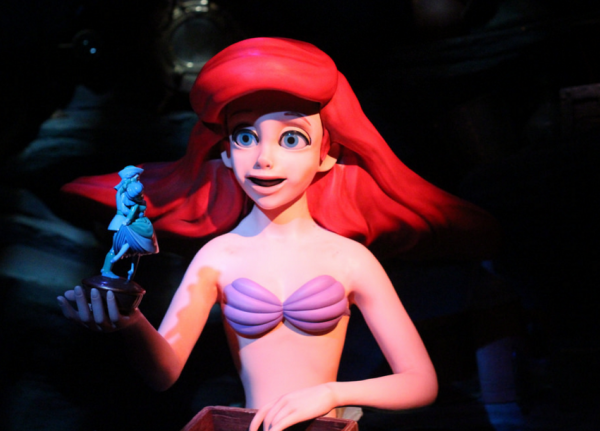 The ride itself is a fairly standard dark ride. Guests board clam mobiles similar to the vehicles from The Seas with Nemo and Friends. As you round the first corner, Scuttle is there to greet you and begin the telling of the story of The Little Mermaid. The ride vehicle slowly rotates around and tips backwards. You’re hit in face by a cool blast of air and you see what appears to be the ever-rising waterline on the clam in front of you.

As your vehicle descends under the sea, You meet Ariel’s aquatic friends as they sing and perform the song “Under the Sea” from the film. This scene is one of the most memorable of the attraction. The room is vast and filled with colorful audio-animatronics. The centerpieces are an articulated Sebastian the crab conducting the entire scene and a dancing Ariel figure. Further on, a giant Ursula sings incantations into a large bubbling pot as she steals Ariel's voice and turns her into a human.

We leave the sea and find the touching scene of Prince Eric trying to find the courage to kiss his mystery girl. The figures in this scene are very well done. Their movement is so fluid that when Prince Eric hesitates like an actual human would, you forget that he’s not real. The most jarring portion of the ride happens next, as most of the rest of The Little Mermaid story is lost and we jump ahead to the happy ending with King Triton and all of Ariel’s sea friends waving their goodbyes to the happy newly married couple of Ariel and Prince Eric. The only tip of the hat to the harrowing battle scene from the film is a small, flat figure of a dead Ursula sinking into the ocean. 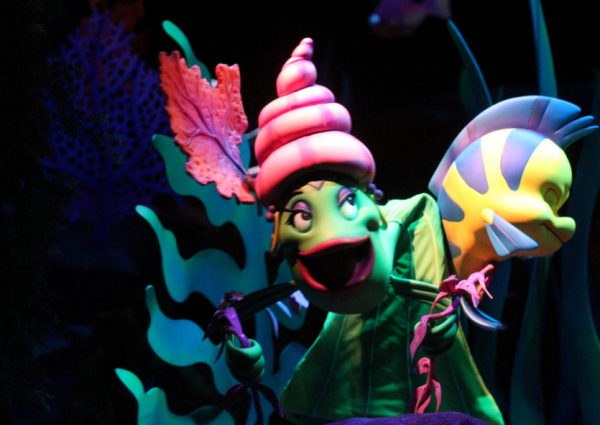 Though there is lots to be excited about in this attraction, there’s also lots to be ho-hum about. The figures stand out as something to be noticed, but they are lost in a inconsistent attraction with a half-presented storyline. It is exactly as it was designed to be: a Disney dark ride. The main issue is that it lacks the soul that past dark rides had.

The loss of Mr. Toad’s Wild Ride at Walt Disney World’s Magic Kingdom is still considered Disney’s largest blunder to date, despite the fact that the ride’s replacement, The Many Adventures of Winnie the Pooh, is an excellent attraction. Aside from a few neat things to look at, if Under the Sea - Journey of the Little Mermaid was removed tomorrow, not many people would even notice. The fact that this attraction is a near exact copy of an attraction at Disney California Adventure doesn’t do it any favors either. One has to admit, however, that it will entertain young guests in the New Fantasyland area for years to come.