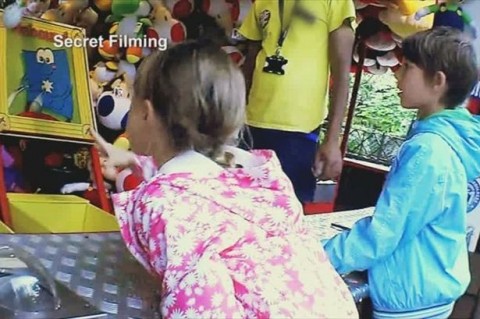 Games stalls at travelling funfairs have never had a very good reputation. Many players assume that they are rigged in some way, and that the operators can afford to rip off their customers, safe in the knowledge that they'll be moving on to a new location soon. Fair or not, it's a reputation that's been established over many decades.

In his autobiography, legendary ride designer John Wardley reveals that he once offered to fix some "one-armed bandit" machines for a travelling funfair. He discovered that while they had a mechanism to accept coins from punters, there was no pay-out mechanism at all - it was literally impossible to win. Few would be surprised by this story.

But what about the fairground-style games stalls that operate at theme parks? In the same way that such parks cannot afford safety incidents on their rides due to their need to attract repeat custom, surely they must also ensure that their games are fair?

According to a BBC documentary aired last week, the answer (in the UK, at least) is no. Your Money, Their Tricks exposed a variety of underhand tactics used by employees of HB Leisure, which runs the games at Thorpe Park.

Your Money, Their Tricks is not a very good programme. Among the so-called "tricks" covered by the first entry in the series was the practice of cinemas selling popcorn at "marked-up" prices - despite the cinema chain in question freely allowing the presenter to bring his own cold food into the film. The shocking practice of the O2 Arena charging high prices for car parking during concerts for those who haven't pre-booked a space was also labelled a "trick" - ignoring the fact that a major concert venue in London clearly has a need to discourage thousands of cars from rocking up on the day of an event and overwhelming its parking facilities.

The segment on Thorpe Park started equally badly. A senior manager at HB Leisure was caught on camera saying that it was possible to increase the difficulty of winning prizes on Thorpe Park's games, in order to ensure that a profit was made. He stressed, though, that it must always be possible to win.

As an example, the programme showed how the odds on the "Mad Milk" game could be manipulated. The goal of the game is to knock down some bottles with a single throw of a ball. The manager explained that the number of bottles could be increased to make the game harder. "You are increasing the difficulty level of the game. You are not actually cheating anyone," he said - and he was right. As long as the player is shown that there are four bottles and not three before playing, there is nothing really wrong with this practice - and HB Leisure rightly defended it.

Later on, though, things became much more sinister. On "Rebound", guests were shown how a ball could be bounced off a board and into a box, claiming a prize. However, the ball that was used for the demonstration was weighed down by a coin - making it easier to use than the actual balls given to the customer. This was blatant false advertising - and HB Leisure was forced to admit that it didn't "sanction, condone or encourage this practice." Similarly, it was unhappy with hosts on another game shouting loudly to distract customers, labelling it "inexcusable".

"Inexcusable" it may be, but so is HB Leisure's failure to properly monitor how its games are being operated, if indeed it wasn't aware of such practices to begin with. Similarly, Thorpe Park's operator Merlin should be thoroughly embarrassed at its failure to properly vet its supplier's actions.

It's hard to believe that such practices are an isolated problem. HB Leisure also runs the games at Alton Towers, Chessington World of Adventures, LEGOLAND Windsor, Drayton Manor and Paultons Park. It recently expanded into the US, too, winning the contract to run the games stalls at Merlin-operated LEGOLAND Florida.

In a poll that TPT ran over the weekend, 90 percent of theme park fans said that they believed that games at theme parks are rigged. Given the evidence provided by the BBC, it's difficult to argue with them.

Everybody accepts that theme parks need to make a profit on their games. But visitors deserve better than the underhand tactics employed by some of HB Leisure's employees. It's time for Merlin and others to up their game.