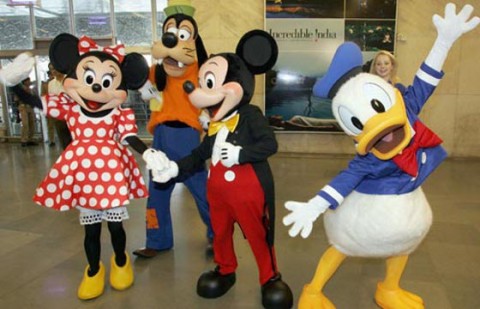 Working in the parks, Disney Cast Members see and hear some strange and perplexing things from time to time.

It’s a well-known fact that Cast Members hear some strange questions throughout the day. One of the more common inquiries even made its way onto a tee shirt reading “What time is the 3 o’clock parade?” Gift shop guests probably laughed at the cute attire, but this is no exaggeration of the bizarre things seen and heard around the parks.

Orlando residents often contend that tourists simply leave their brains at home when they leave for vacation. There just isn’t room in their baggage for something so trivial. To be a little more fair, hours spent pounding the pavement in the Florida heat and sun can fry just about anyone’s brain after a while. Decipherable or not, the unusual encounters that take place with Disney guests are certainly entertaining.

With Walt Disney World being one of the most well-known theme parks on the planet, you might expect guests to have some idea of what they’ll encounter on arrival. The Magic Kingdom is the most-visited park in the world, with over 17 million visitors in 2011 alone. Nevertheless, many guests show up at the wrong park entirely for what they’re after.

No, Hogwarts is NOT a Disney castle.

An even bigger geographical miscalculation occurred when a guest at the Magic Kingdom asked a Cast Member for directions to the Matterhorn. That particular attraction is located nearly 2,500 miles away at Disneyland in Anaheim, California. If you’re going to plan a once-in-a-lifetime vacation to Disney, do make sure you’re headed to the right side of the country.

4. Comments about the weather

Many busy families probably have a limited amount of time to plan their vacations, which is how these little mishaps happen. Some other questions Cast Members have heard aren’t nearly as easy to explain. One question that pops up time and again is “Why is it raining?” Other less common variations include “Can’t you control the weather here?” and “I thought there was a weather dome over Disney World.” If you find yourself contemplating the great mysteries of the weather in Orlando, here’s a comprehensive summary of what the Cast Members can tell you:

Rainy days aren’t the only times when guests find themselves looking to the sky. One guest noticed the moon on a particularly clear night and demanded to know how it was done. Alas, Disney magic does not yet extend to the moon.

3. Questions about the Cast Member themselves

Another common category of strange guest questions stems from the fact that not all guests have a firm understanding of how the park works. Guests have complained that Cast Members at the Haunted Mansion look like they hate their jobs with comments like “If you can’t smile, you should just quit.” Well, they can’t smile…but that’s not because they don’t want to. It’s simply part of the elaborate theme of the attraction. 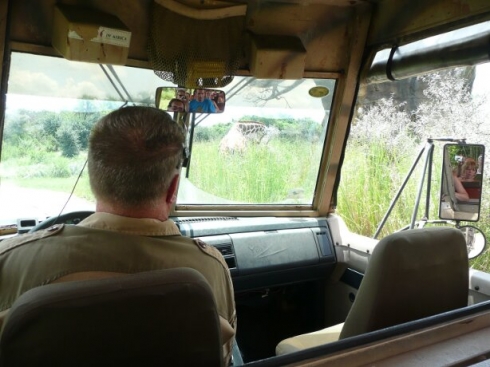 Yes, the animals are real.

Some guests at Kilimanjaro Safaris want to know how the animals look so real. This answer’s very simple. They look real because they are.

2. Myths about the attractions

Some guests don’t bother to ask questions but simply share their strange assumptions proudly with the rest of their party. While the Pepper’s Ghost effect used in the Haunted Mansion is fairly well known among fans of the ride, one determined guest insisted that the ghosts’ images must come from a projector. On seeing the Iron Man monorail, one woman knowingly told her family about the “Star Trek Train.” During parades, some headstrong guests steer their whole party confidently through the crowds who have been waiting over an hour for the event, convinced that they’ll easily cross the street between floats.

On the assumption that all at Disney must be impeccably clean, guests can be seen traipsing through the park barefoot, wading into the Seven Seas Lagoon (despite the large “no swimming” signs), or reaching to trail their hands in any ride waters they can find. Disney custodial is good but they aren’t miracle workers. Please oh please stay away from any water that doesn’t come out of a fountain or actual food service location.

Since sending the same ride vehicle, selling the same merchandise, or cleaning the same room can get a bit monotonous day after day, sometimes it’s nice to have something like a genuine disbelief that Walt Disney World doesn’t exist within a magical weather bubble to change things up. And the fun isn’t exclusive to Cast Members. Just pay attention to your fellow guests and your next vacation and you’re sure to spot some shockers yourself. Just remember the 3 o’clock parade is at 3 o’clock and you’ll do just fine. And if you’re ever in doubt, just go ahead and ask. Whatever it is you’re wondering it’s probably not the strangest thing that Cast Member has ever heard.

This isn't Disney related, but comes from my 9 years of working customer service at McDonald's in the 1990's. Most people know that almost every McDonald's (especially at that time) stop serving breakfast at 10:30. A woman pulled up to the drive thru speaker at about 10:50 one morning and placed her breakfast order. I had to inform her that unfortunately, we stop serving breakfast at 10:30. As serious as a heart attack, she replied irritatingly, "That's what they told me at the LAST McDonald's I just went to!!!" O.o

Oh my lord, I think this is my favorite article. I was laughing so much at the... Uh... "Interesting" question XD I surely hope it isn't grown adults asking "why is it raining" or "why can I see the moon?" and my gosh, the HM question haha! It's literally the only.ride in MK where you aren't forced to smile! It's all part of the act, but I guess some people... Are.. Well for lack of better words, not fully there ahaha. I don't blame them though. Who needs a brain when you're trying to have fun? XD

I have two favorites from my days as a CM - 1. Guest insisted that I show them the switch on the monorail that made it hover. After a while, I told her that it was against safety regulations to show her. 2. Working a GMR, guest asked how to get to the monorail and insisted that she rode it to the park. It took two managers and myself to convince her that there was no monorail at the park. I really wanted to tell her 'well ma'am l, when you find it let me know'.

On our last trip to Magic Kingdom I spotted a guest with a hat that read "F-ck Yeah" (missing letter included), pushing a stroller and holding the hand of a toddler. Wonder what sorts of questions he had for cast members?

Oh my goodness! I just went to Disneyland Tokyo and saw a shirt with the F word with nothing blanked out and a handbag with it on there. I wonder if they realize what the English words they have chosen to wear mean?