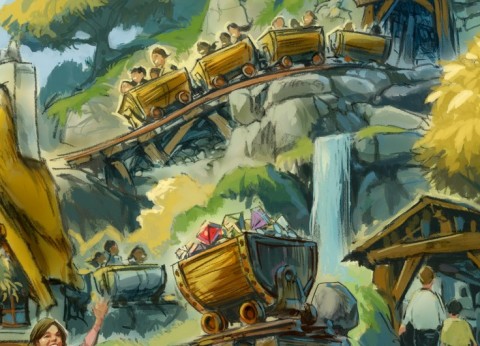 Snow White won't be gone for long at the Magic Kingdom. While you might expect a princess to preside over a kingdom, the initial plans for New Fantasyland at Walt Disney World’s Magic Kingdom brought their reign to a whole new level. When plans were announced for the highly-anticipated renovation, the concept art looked a little different than what can be seen coming to fruition today.

New Fantasyland opened its first phase last winter with the opening of Enchanted Tales with Belle (a hybrid walk-through, interactive show, and meet-and-greet) and Under the Sea: Journey of the Little Mermaid (a new age dark ride based on the popular film) as well as the Be Our Guest restaurant, Gaston’s Tavern, and Ariel’s Grotto meet-and-greet spot. A sub-area within Fantasyland dubbed Storybook Circus opened as well, based on the skeleton of the former Mickey’s Toontown Fair, but boasting a whole lot more detail and charm.

But if the initially-announced plans for Fantasyland had come to light, Storybook Circus wouldn’t have existed at all. Instead, Pixie Hollow, a land of oversized grass blades and giant mushrooms dedicated to the Tinkerbell film franchise with an elaborate meet-and-greet for Tink and her fairy friends would’ve found its way to that corner of the park. Across the way, Cinderella would have her own meet-and-greet in a recreation of her stepmother’s manorhouse, and Sleeping Beauty’s Aurora would entertain fans in a quaint cottage tucked back in the woods.

At image center, Cinderella's chateau was originally planned as one of many meet-and-greets. At top right, Pixie Hollow was planned to replace Toontown Fair. Image © Disney.

Pretty quickly, fans noticed that the much-touted renovation amounted to little more than meet-and-greets with the princesses (a separate one for Belle, Ariel, Tinkerbell, Cinderella, and Aurora) with one ride and one restaurant being the only “meat” of what was promised to be the park’s most ambitious expansion to date.

Revised plans replaced Cinderella's chateau with the Seven Dwarfs Mine Train, and Pixie Hollow with Storybook Circus, shifting the land away from Princess-mania. Image © Disney.

Given time to ponder the decision, Disney made a few revisions. The first was to combine many of those royal encounters into a single Princess Fairytale Hall. The second was to place that Hall into the space occupied by Snow White’s Scary Adventures, one of Fantasyland’s classic dark rides dating back to the park’s 1971 opening.

Snow White may have been exiled from her Fantasyland home, but her sacrifice opened up valuable real estate for a new attraction, and one in which she may find a home yet again.

Off to work we go! 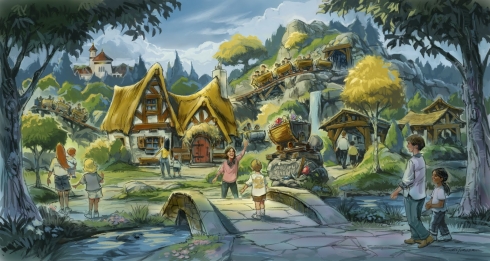 The dwarfs' cottage and rolling hills disguise the roller coaster as a genuine trip into the mines. Image © Disney.

Though it’s currently concealed behind construction walls, it’s hard to miss the rebar, concrete, and steel rising in a mound in the center of the New Fantasyland expansion. Currently little more than grotesque infrastructure and wheelprints through mud, this prime spot will soon be home to a babbling brook, rolling grassy hills, a thatch-roofed cottage, and a few mine tunnels into the workplace of Snow White’s seven companions - the Seven Dwarfs Mine Train.

In true Disney fashion, little is known about the ride experience aboard this new, family-sized steel roller coaster. Even a virtual ride-through would do little good when the ride’s focus is its story, not its physical layout.

What is known is that the Seven Dwarfs Mine Train will be manufactured by Vekoma (a favorite of Disney, responsible for nearly all of its modern steel roller coaster work) and will feature both indoor and outdoor scenes, likely passing through dark ride scenes in the former and charming landscapes in the latter. You can expect those indoor scenes to pay homage to Snow White’s former dark ride, perhaps even featuring the princess herself. 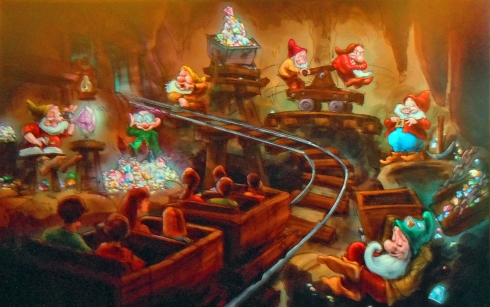 Disney has also mentioned that the ride will be more thrilling than Goofy’s Barmstormer (a Vekoma Roller Skater in the land’s Storybook Circus) but less thrilling than Big Thunder Mountain Railroad, placing it squarely in the age-range expected for Fantasyland’s fanbase.

Another interesting aspect of the ride promises to be its ride vehicles. Designed to resemble antique mine cars, the trains will feature free-swinging bodies, so that as the train navigates turns, each car can gently swing, sway, and bank as you would expect from a real mine cart.

The Seven Dwarfs Mine Train will prove a fantastic family attraction and new-classic for the famous park. Image © Disney.

Disney was right to re-evaluate its plans for New Fantasyland and include the Seven Dwarfs Mine Train in those edits. Even if the renovation’s intention was not to be a “Potter Swatter” (a direct answer to Universal’s Islands of Adventure’s wildly successful Wizarding World of Harry Potter) as is popularly presumed, the land’s blatant skew toward young girls and the Disney Princess line was doomed for disappointment – basing a whole section of the land off of Disney’s direct-to-video Fairies franchise alone is asking for it.

The inclusion of the Seven Dwarfs Mine Train has given a more gender-neutral addition to the land’s line-up, as well as a much-needed attraction. Even with its additional thrills and a more adventurous spirit, it will still be an attractive area of the park, on-par with Prince Eric’s seaside castle, Belle’s cottage, and the gorgeous Storybook Circus.

There’s little to disparage in the plans for the Seven Dwarfs Mine Train. We can only hope that the ride’s hourly capacity is enough for the park’s heaviest crowds (the nearby Little Mermaid dark ride can see wait times crest an hour despite its hyper-efficient omnimover ride system, after all, even while its identical cousin handles breezy California crowds with ease). That said, we can’t imagine that Vekoma and Disney don’t know their clientele by now, and we have every confidence that Seven Dwarfs Mine Train will be a perfectly appropriate and highly-marketable addition to the most visited theme park in the world.