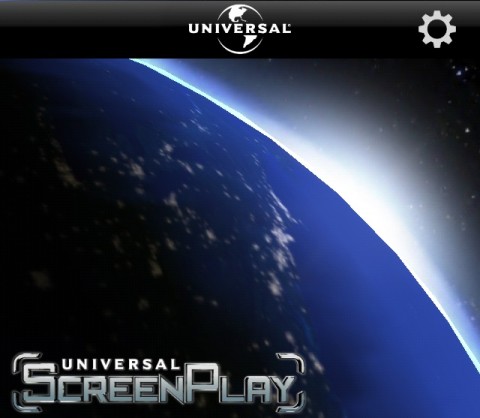 The new Universal ScreenPlay app allows guests to interact with movie posters in an innovative and exciting way.

In late March, Universal Studios Florida unveiled a new app that allows visitors to interact with the park in a whole new way. This app, called Universal ScreenPlay, makes fun use of the numerous construction walls to be found around the park. These construction walls have been decorated with old movie posters since they were erected, but until recently these didn’t serve any real purpose other than offering a little eye candy on the long bland walks surrounded by otherwise plain walls.

Now, many of the movie posters on these walls are interactive thanks to the ScreenPlay app. At this point, you can only interact with movie posters inside Universal Studios Florida. Islands of Adventure isn’t in on the fun, though app stores tease that ScreenPlay will expand to other parks in the future, meaning that Islands of Adventure and even Universal Studios Hollywood could be joining in. Right now, you’ll find the interactive movie posters on the construction walls that border the presumed Harry Potter expansion. The walls begin just past the exit to Disaster and end by Fear Factor Live.

You’ll see two types of movie posters on these walls. The smaller vertical posters are most common. These are interspersed with larger horizontal posters that are a bit more exciting. You’ll find out why in a moment. The larger posters are set into small alcoves in the walls as well so you can’t miss the fact that these are something special. Every poster with a small Universal ScreenPlay logo in the corner will interact with the app.

To use Universal ScreenPlay, just download the free app onto your iPhone or Android device. Open the app and select the “Scan” option to get started. Point your phone at any of the interactive posters and get ready for the action to begin. As mentioned before, there are two types of posters.

The vertical posters offer you a trivia question related to the movie. You have to continue attempting to answer the question until you get it right, so if you really have no idea you’ll still have a chance to click on all the options until you get to the right one. After answering the trivia question, a video clip will load offering a short snippet of the movie in question. One major downfall of this app is that the movie clips take a long time to load and you have to stand near the poster until the clip is fully loaded if you want to see it. For this review, we watched a few of the movie clips but quickly lost interest in standing around in the sun waiting for a few seconds of a classic film.

Some of the movies you’ll encounter on these posters include:

The horizontal movie posters are a lot more fun. These are fully interactive and give you a chance to snap some really unforgettable photos of your visit. When you scan the image, the poster rolls away and the area behind comes to life. 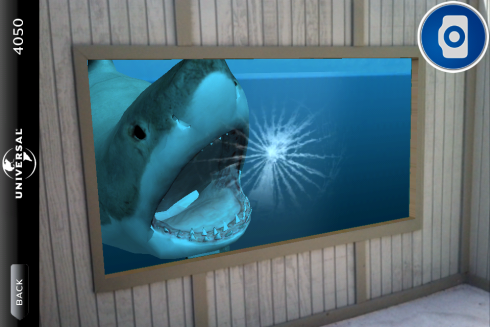 Jaws emerging from the poster at Universal Studios Florida via the ScreenPlay app.

Scan the Jaws poster and the frame of the poster becomes a window into an aquarium where you’ll see a capsized boat and the menacing shark pounding on the glass to get to you. After a few tries, he breaks through and you see a 3-D animated shark snapping at you. The t-rex reaches out of the Jurassic Park poster, the DeLorean Time Machine zooms past from Back to the Future, and Optimus Prime lunges out from the Transformers poster. 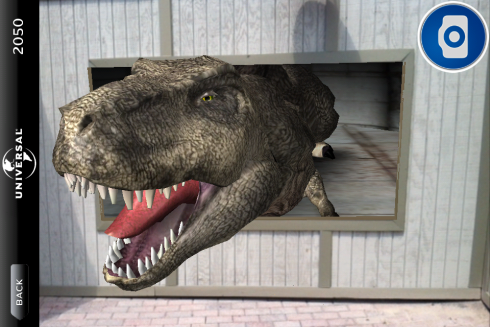 The Jurassic Park T-rex emerging from the poster via the Universal ScreenPlay app.

A camera icon appears in the corner of the screen when you’re viewing these interactive posters. It’s important to note that you don’t have to stand directly in front of the poster for the effect to work. In fact, the 3-D image is much more impressive when you stand off to the side if you want to get some of your friends or family members in the poster. As you step back, you’ll see that the characters are really emerging right from the wall to reach out for you. Have your victims ready to jump in with the characters of these films and put on their most appropriate awed, confused, or terrified face.

It may take a few tries to get the perfect shot since the animation only lasts for a few seconds, but this is a really fun feature to play around with. If you only have time to snap a few posters, make sure you look for these larger ones for the most fun. 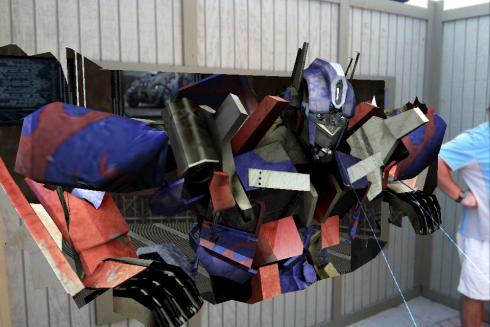 Optimus Prime in the Transformers poster via the Universal ScreenPlay app.

The walkway where these posters are located gets very busy during the day, but the app developers apparently thought ahead in this respect. You don’t need to wait for a completely clear shot of any of the movie posters for the app to scan them. Other visitors passing in front of the shot don’t effect it at all as long as they keep moving and don’t block the shot for an extended period of time.

As you scan posters, you unlock special achievements in the app. Once you’ve passed the poster area, you can continue the fun with the app’s Virtual Postcard feature. This allows you to add stickers on top of any picture you take, either at the park or at home. You can then share these postcards directly on Twitter or Facebook via the app.

If you’re anxious to get started but aren’t planning to visit the park any time soon, the Google Play store offers downloadable posters that you can scan on your computer screen to get a little taste of the action. Though there were only about 45 interactive posters in Universal Studios Florida at the time of our visit, there are plenty of construction wall posters that don’t have the icon yet and may be added in the future. If you have a little extra time to kill on your next visit and you want to try a new and innovative experience, the ScreenPlay app is a great option.