Blackpool Pleasure Beach has a somewhat unique position within the amusement park industry. Famed for its iconic thrill rides including: the world’s only Arrow single rail track coaster, Steeplechase, and one of the last remaining wooden Wild Mouse coasters, the famous seaside spot has shifted from a classic amusement park to one of the top entertainment districts.

Yet still, Pleasure Beach has managed to sustain a British charm that no other resort in the country could. Keen to build upon this iconic arsenal of attractions, a new £5 million dark ride was on the cards for 2013, complete with an unique British twist...

Finally confirmed by the park in the summer of 2012 after a flurry of rumours, the attraction received financial backing from The Lancashire Enterprise Partnership and marks another change for Pleasure Beach; basing a new major attraction on a well-loved franchise. The new strategy has already proven to be a success for the sea-side resort, with Nickelodeon Land opening its doors in May 2011. This transformed the former Beaver Creek sector into a first class family amusement area full of colour and "slime-tastic" fun, that has proven to be a huge hit with all ages.

Replacing the Gold Mine 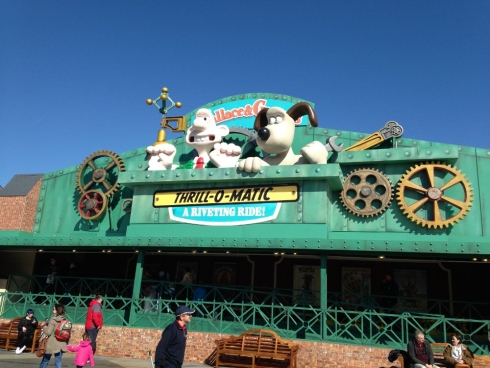 Wallace & Gromit's Thrill-O-Matic marks three years of extensive work for the Pleasure Beach, who first entered discussion with Wallace and Gromit’s creator, Aardman, in late 2010. Replacing the well-celebrated Gold Mine dark ride, which took its final passengers down its iconic shaft in September 2011, a new British icon was set to assume the ride's former position in the form of an attraction based upon the famous animated adventures of Wallace and Gromit. With each detail approved by head of Aardman, Nick Park, himself, on paper, it would appear that something special was in the pipeline that would aim to transform the unsuspecting public away from the bedlam of 21st century life and into a three-minute fantasy world surrounding some of the best loved animated characters of all time.

Upon entering the ride area adjacent to the now defunct monorail station, all efforts have been made to ensure first impressions count. The facade is beautifully crafted, with spinning cogs and of course, moving animatronics of Wallace and Gromit themselves superimposed superbly over a brick coloured building that is themed as though it has just been taken from the TV show itself. Complete with the ride's fun logo plastered over the front, themed pavements surrounding the entrance, themed music blaring out around the surrounding area and not forgetting costumed characters all add up to what has been described by one enthusiast, as a very "Disney-esque" attraction. 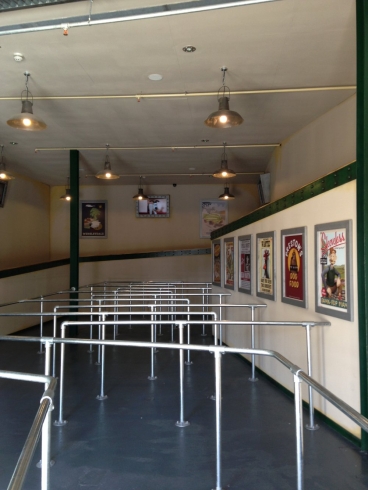 The ride's queue is a little spartan.

Enter through the ride's arched entrance way, and you'll discover that a minimalistic approach has been adopted for the queue line that meanders its way around the small queue-house. It's not a bad thing either, with humorous posters of the two characters photographed around various sites across Blackpool setting the tongue-in-cheek scene for what is about follow. It’s not the most imaginative queue line for a dark ride we have ever seen, but it's a sound introduction to the attraction. 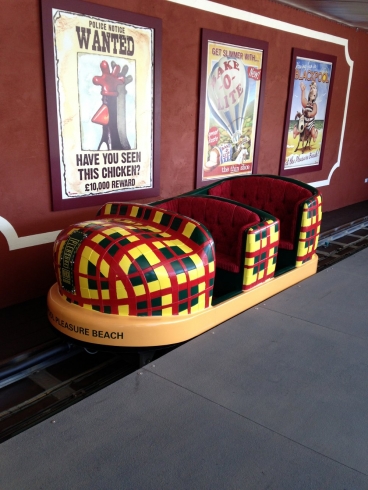 Once arriving at the station, the ride cars pull into view, themed to Wallace's trademark slipper. It's a welcoming sign for fans of the series with the plush ride seats (minus cocoa and cheese, sadly) ensuring the riders feel right at home before being guided through some of the most recongnisable scenes of the show's history.

For the technically-minded, Wallce & Gromit's Thrill-O-Matic's route has remained un-touched from its days as the Gold Mine, but has been re-tracked by Yorkshire based supplier WGH Transportation. In other words, the attraction is British through and through which adds another element to the its charm, and appears to run significantly smoother than its predecessor as the dark ride tracks have undergone major restoration for 2013. As the swift dispatch system kicks into play, the car meanders past the on-ride ride camera with a quick wave from Gromit, before scooting past a famous scene from A Grand Day Out. The famous orange spaceship soon comes into view along with some of the dialogue from the film filling the audio space around the room. Perfectly matched to the movements of the ride cars, it's hard not to look on in awe as the authentic theming depicts the imagination of Nick Park superbly as the beautifully-crafted theming shimmers in the spotlights of the low-lit caverns the ride cars traverse.

A quick drop later, some more nicely-spaced audio is heard along with some more themed lighting perfectly timed with the movement of the rides cars, marking a smooth transition to the next scenes from: A Close Shave, and not forgetting The Wrong Trousers. Seeing Wallace in person being catapulted through his kitchen roof is sure to bring an element of nostalgia to any Brit and is truly enchanting to see in person.

After moments of brilliance, the attraction sadly shows signs of gaps that may leave some riders feeling "cheesed off". The transition to the following scenes could be described as minimal, with the attraction leaving riders in moments of complete nothingness for some time, with Wallace’s warming voice left as the only form of company. It's a disappointing sight for such a large scale attraction when taking into consideration these moments of darkness have replaced the Gold Mine’s iconic "cafe fly-through" that it shared with neighbouring River Caves.

After this disappointment, the pace of the ride thankfully picks up again. From here, there is a large focus on the 2005 film: Curse of the Were-Rabbit. Some nice lighting effects are intertwined into the roof of the rides cavern as rabbits, one by one, disappear from sight. Combined with more cleverly-designed audio, and evenly-spaced elements from various other Wallace and Gromit episodes, more light-hearted humor is inflicted on riders as the cars gracefully guide their way around some of the best loved scenes of the show.

The Aardman store is likely to do a brisk trade.

A few moments later, the final scene comes into play and is without doubt, one of the most memorable conclusions of any dark ride in the world. Featuring the famous giant rabbit itself, and a few strobe effects, it certainly shows off Wallace and Gromit’s more cheeky side as riders are treated to a slight scare or two. It works well to thrill the young and old alike, before the slippers meander outside and the ride's station and the familiar, compact Blackpool Pleasure Beach skyline roll into view. Disembarking, riders are then invited to stroll into the specially designed Aardman store, which sells some unique merchandise. From Shaun the Sheep-branded pens to Wallace and Gromit-themed t-shirts and photos, the store is sure to provide a haven for any animation fan.

Strolling through the archway and breathing in the fresh-air of the seaside, the experience is over. Whilst some appeared slightly underwhelmed by Pleasure Beach’s latest offering, the experience is more a showcase of the best of British family comedy apposed to the heavily narrative based dark-ride that some may have expected. The scenes that are implemented work superbly well in order to encapsulate the atmosphere of a well-celebrated franchise, that even after over a decade of gracing our screens, still has the power to enchant the young and old alike. However, ‘Thrill-O-Matic’ is by no means a game-changer, with the technology incorporated being replicated on many other enclosed attractions years before.

With moments of complete nothingness, the charm of the iconic Gold Mine has been lost and has been replaced by a somewhat mediocre attraction that will leave some disappointed considering the large budget, with the £7 price tag for non-wristband holders completely unjustifiable. That aside, the attraction marks a step forward for Pleasure Beach as an amusement park, with the incorporation of an highly-themed attraction making the parks ride catalogue look and feel more impressive as the seasons go by. 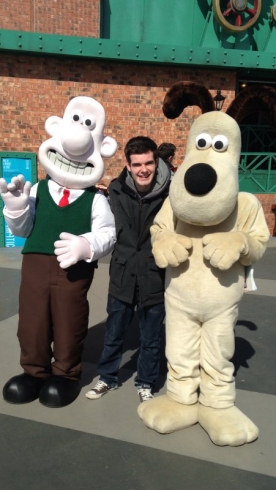 Here I am, with some new friends.

For cleverly encapsulating the atmosphere of one of the best loved animated series ever to come out of the United Kingdom, the ride works well in order to ensure both fans of Wallace and Gromit and families are craving more "crackin' cheese" after experiencing this attraction, and is a must for anymore who wishes to experience the best of british dark rides.

Wallace & Gromit's Thrill-O-Matic is due to officially receive its grand opening on April 24th with soft openings taking place throughout the weeks leading up to the grand unveiling.