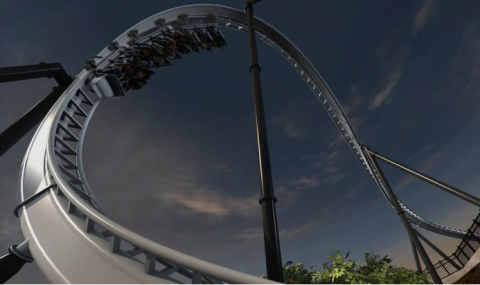 YOLO: You Only Live Once. Certainly dreamed up by middle-aged “suits” in a stuffy conference room, the ill-timed and much-despised phrase outdated already by evolving social media is the unfortunate tagline for a roller coaster that is actually prepared to leave a lasting mark.

In 2013, Six Flags Magic Mountain in Valencia, California is poised to open its eighteenth roller coaster, further securing its record as the "Coaster Capital of the World," with more roller coasters than any other park on Earth. And like its already-varied assortment of mix-and-matched manufacturers, styles, and experiences, Full Throttle will put a new and innovative spin on the idea of what a traditional roller coaster can do.

Apparently unrelated to the energy drink of the same name (an early worry of fans given Six Flags’ past penchant for product tie-ins, including decorating theme park trains, stations and hills with enormous ads for bubble-gum, M&Ms, movies, television shows, cell phones, and even deodorant), Full Throttle will be designed and manufactured by Premier Rides of Maryland. 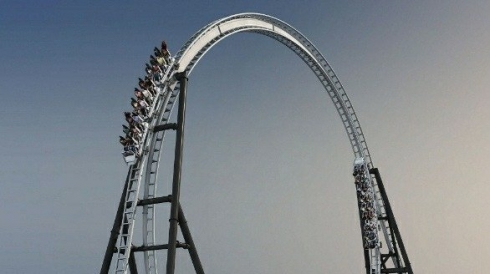 The ride's massive loop contains track on the inside and outside of the spine, shown here with two trains in action at once. Image © Six Flags.

A mid-sized company that dabbles mostly in regional park attractions, Premier is known for their launched roller coasters including Flight of Fear (Kings Island & Kings Dominion), Backlot Stunt Coaster (formerly themed to The Italian Job, located at a handful of Cedar Fair parks), Mr. Freeze Reverse Blast (At Six Flags Over Texas and Six Flags St. Louis), and Universal’s Revenge of the Mummy in both Orlando and Hollywood.

Full Throttle will continue in Premier’s line of launched roller coasters, but with a few new tricks up its sleeve. For one, the centerpiece of the ride is a 160 foot tall vertical loop. The loop is especially notable in that the single spine of the loop will have track both on the inside and outside – the outside serving as a top hat element and the ride’s last hill.

Edge of Your Seat 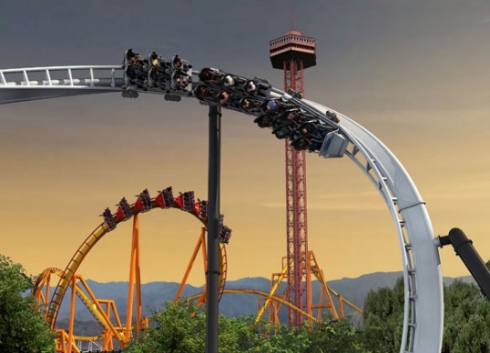 The train travels down this dive loop into a tunnel, then is launched backward and part-way up the loop again. Image © Six Flags.

To begin with, the coaster launches riders to 70 miles per hour and directly into the 160-foot vertical loop (the tallest vertical loop on Earth, though not the tallest inversion as the park originally touted, with that honor already usurped by Cedar Point’s GateKeeper which will open before Full Throttle).

A twisting path through tree canopy and over the plaza entrance of Superman: Escape from Krypton turns into a dive loop, with the train rolling over in mid-air and then continuing down a half-loop into an underground tunnel. There, a series of “special effects” will occur (displayed in the park’s promotional video as LED lights and fog) before the ride meets its second launch – backwards.

The coaster will launch backwards a good way back into the dive loop before rocketing back down into the tunnel, where a second set of LSMs will give the train a final boost to make it over the top hat element (which Six Flags oddly calls a "world's first" top hat, likely referencing the outer-loop rails but without making that distinction) before it meets the ride’s brakes on the other side.

Exiting the tunnel, the train will launch once more, crest a top hat over the loop, and then immediately brake. A short-but-sweet ride. Image © Six Flags.

Full Throttle is not a game-changer. When it’s all said and done, the ride clocks in around a minute, give or take (but probably take). That alone makes us want to call this ride a “medium-sized” ride, despite the impressive statistics. That said, it’s a new thrill for the hungry crowds that descend on Six Flags Magic Mountain, and doubtlessly a fun ride. It will be especially interesting to see how many people are truly surprised by the backwards launch midway through, creating a mini version of Intamin’s Impulse Twisted coasters as riders rocket back and forth for a moment.

Our only lingering fears about Full Throttle are in its presentation. Billed alongside the aforementioned “YOLO” and a call to “Be It. Live It. Full Throttle” and promises of “Sensory Overload,” Full Throttle might suffer from Thirteen Syndrome – that is, a lot of hype and immeasurably heightened expectations around a quality family ride whose insatiable marketing oversold it by leaps and bounds (referencing the 'so scary we'll keep a nurse on site' family ride at Alton Towers).

And of Premier’s installations, Full Throttle will be among the lowest in terms of hourly capacity, with theoretical throughput of 800 riders per hour – only half as many people as the park’s slow-loading Tatsu, which could be dismally low on a crowded summer Saturday. At least it’s slightly better than the park’s Green Lantern: First Flight.

Full Throttle won’t redefine the roller coaster and as long as it doesn’t become an ad for the Full Throttle Energy Drink, it won’t redefine Six Flags’ relationship with its thrill-seeking clientele. But it will provide yet another unique ride in a park that’s already chocked full of varied experiences, and provides Premier Rides with a large installation at a well-known park. In a few seasons when it’s not plagued by visitors eager to ride the newest-and-biggest, Full Throttle will certainly become known as a comfortable staple of Magic Mountain’s arsenal.