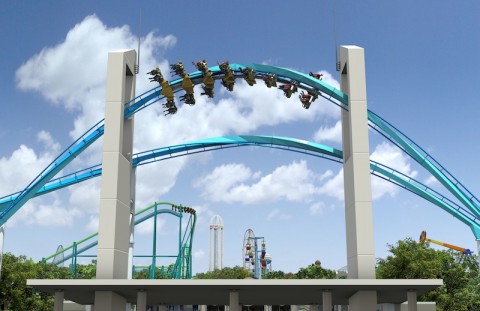 The gates are soon to open in one of Cedar Point’s most ambitious expansion projects yet. In a year that’s chocked full of aggressive park expansions and clandestine dark ride projects, Cedar Point’s return to its cement-footed roots is a move that’s both relieving and astounding.

Cedar Point’s status as “the roller coaster capital of the world” really took hold in 1978 with the opening of Gemini, the first roller coaster on Earth to top a 100-foot height. The park bested itself and the 200-foot record with 1989’s Magnum XL-200, and then catapulted into international destination status with 2000’s Millennium Force, the first full-circuit coaster to pass the 300-foot height mark. Only three years later, Top Thrill Dragster crested the 400-foot mark, and secured the park yet another world-record.

Cedar Point’s last major roller coaster installation was 2007’s Maverick, a ride that initially befuddled fans with its lack of world-records. With a meager 100-foot drop and two inversions, Maverick seemed an incompatible choice for the park. But Maverick had a number of tricks up its sleeve that have earned it rave reviews and a heralded spot among the park’s best.

Now, Cedar Point is ready to introduce its follow-up to the chain of success – this time, with a starring role like never before. 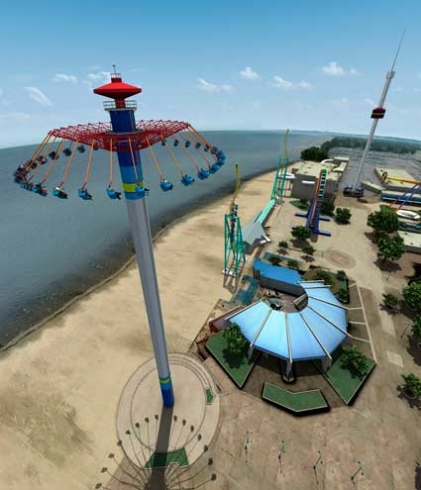 Begun with 2011's WindSeeker and the 2012 demolition of Disaster Transport & Space Spiral (upper right), GateKeeper is a much-needed refresh to the beach area. Image © Cedar Fair.

In 2011, Cedar Point added WindSeeker, a towering swing-ride, to an alcove within the park’s main entry, located against the beach. An installation of the ill-fated Year of the Tower Ride, WindSeeker had its share of problems (and its West Coast sibling remains closed, prompting speculation that the six clones of the ride at various Cedar Fair parks will not open with their respective parks this spring, at least pending the installation of a mechanical accessory for evacuation). However, WindSeeker added a vibrancy and kinetic energy to a corner of the park that was often written off for its lack of thrills.

Rumors had circulated for years that something – anything – would be done with the park’s aging bobsled roller coaster, Disaster Transport, located next to WindSeeker. Enclosed and re-themed in 1990, an infamous lack of upkeep on the ride’s once impressive space props and effects had left the ride useful for not much more than its air-conditioned queue, and even that was shuttered when a Halloween attraction was constructed in it.

On 30 May 2012, word leaked that Cedar Point’s newest roller coaster (codenamed “CP Alt. Winged” according to a memo from the CEO) would be placed in WindSeeker’s plaza, on the site occupied by Disaster Transport and the park’s Space Spiral observation tower.

The ride was officially announced on 13 August 2012 as the world’s tallest, fastest, longest winged roller coaster, following the new trend of wing coasters built by Swiss manufacturer Bolliger & Mabillard. The model made its debut with Gardaland’s Raptor in 2011, followed by a massive rollout in 2012 with Thorpe Park’s The Swarm, Wild Eagle at Dollywood, and X-Flight at Six Flags Great America. 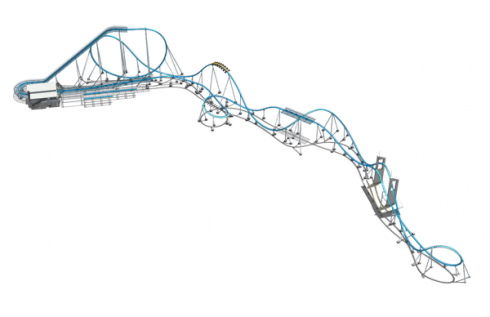 Like its predecessors, GateKeeper will feature massive, winged trains where riders are positioned in pairs on either side of the track, with nothing above or below them. This super-wide train will produce elongated, dramatic movements as riders are turned head-over heels through the ride’s six inversions at up to 67 miles per hour (akin, perhaps, to riding in the outer-edge seats on B&M’s Dive Machine coasters). As promised, GateKeeper is also the world’s tallest and longest Wing Coaster at 170 feet tall and 4,164 feet long.

And like the other Wing Coasters, GateKeeper’s first drop is a doozy. At the top of the lift hill, the train will be flipped upside down before barreling down a 164-foot dive drop. Raptor, The Swarm, and X-Flight all made use of an interesting capability of the ride’s super-wide trains, allowing them to soar directly through and across would-be obstacles, seemingly sliding through cut-outs in those obstacles at the last second. On Raptor, for example, the long, winged trains twist effortlessly through the trunk of a split tree, eliciting gasps from onlookers and shrieks from riders.

GateKeeper is poised to combine the two styles into an effortless mix. Its oversized layout will feature sweeping overbanked turned, elongated inline twists, an Immelmann loop, and a corkscrew. Its defining feature, though, is what it derives its name from.

Cedar Point's new addition will feature a zero-G roll that leaps up over the park’s new front gate and passes through two symmetrical white towers that rise up from the turnstiles. As it passes through that zero-G roll, the train will spiral dramatically through keyhole cutouts on those towers, providing the impression for onlookers and riders that they are about to slam into the modern white towers. 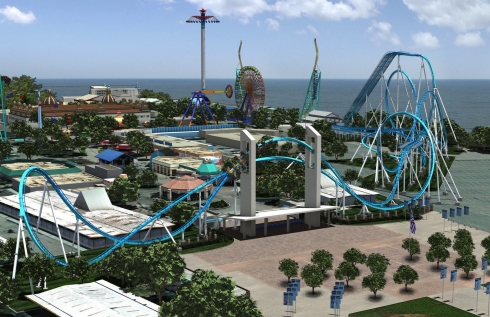 Leaping over the park's remodeled entrance, GateKeeper combines the size and scope of a hypercoaster with a Winged Coaster's "close call" element. Image © Cedar Fair.

After that moment of panic, the ride will immediately turn riders up into an Immelmann before curving and slaloming its way back to the station via a series of hills and helices.

GateKeeper's trains, too, will be striking gold and brass hues with sky-blue accents. Each train's lead car is shaped like the griffon-esque namesake creature complete with glowing eyes and other on-board lighting that will make the ride a sight to behold each night. 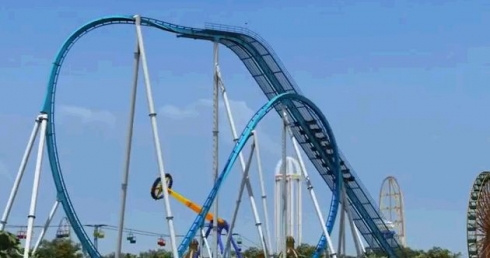 The ride's twisted first drop turns riders upside down before sending them down a half loop into an Immelmann loop. Image © Cedar Fair.

GateKeeper - certain to exemplify the smooth, effortless sensation of Bolliger & Mabillard’s best – is sure to enter the hallowed ranks of Cedar Point’s best roller coasters. And if it also reflects the manufacturer’s astounding hourly capacity (commonly earning its roller coasters the moniker “people eater”), then it will be a powerful force to be reckoned with in Cedar Point’s lineup.

The only imaginable downside to its installation is the loss of Disaster Transport and Space Spiral. While neither were tremendously stand-out attractions in the park’s lineup, they did represent a “family” element that helped bridge the gap between the park’s Peanuts-themed kids areas and the taller-faster-longer roller coasters that each seem to boast a world-record. 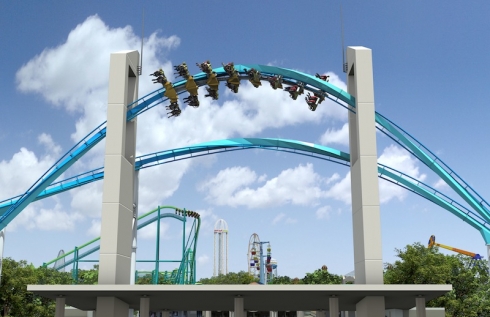 But in one fell swoop, Cedar Point will have re-ignited its roller coaster roots, placed a gargantuan sky-blue mammoth at its entry, and re-vitalized its aged entryway. That, it can be sure, is a tremendously good thing.