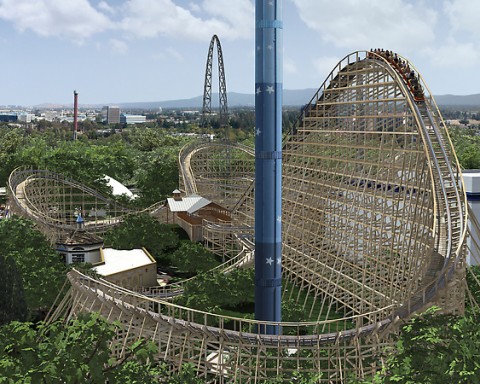 After years of stagnant growth and moments of hopelessness, proverbial gold has been struck in Northern California.

California’s Great America in Santa Clara, California has always been a controversial park. The least well known of the five Paramount Parks and now a mid-ranking family park on Cedar Fair’s roster, the park was engaged in legal struggles in the recent past over its right to expand and the proposed forfeiture of its parking lot to the construction of a sports stadium. Hurdle after hurdle prompted Cedar Fair to put the park up for sale last year, only to accept an offer – a loud and clear warning to the state that Cedar Fair meant business – and then cancel altogether once the state promised to locate the stadium elsewhere.

Through those rocky years of questionable future, little was added to the Northern California park. Promises of a new wooden roller coaster came and went; blueprints and plans leaked and then were redacted. It just seemed that there wasn’t much happening at California’s Great America, and that it would stay that way for a while.

But now, in the dark recesses of a gloomy cavern, a shimmer of gold... 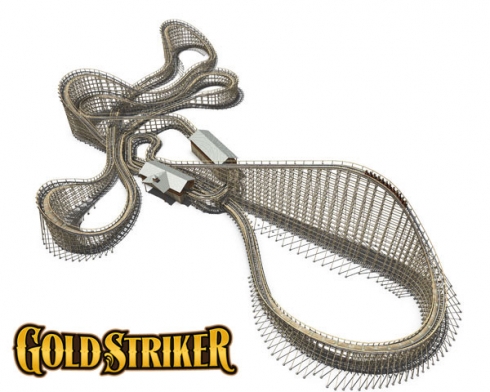 With a prowling layout based on quick turns and low-to-the-ground maneuvering, Gold Striker keeps to GCI's tried-and-true formula for success. Image © Cedar Fair.

If there’s a best way to bring an end to years of stagnant growth, 2013’s Gold Striker is most certainly it. Built by Great Coasters Interational (GCI), this brand-new wooden roller coaster will be a sight to behold. Featuring the signature slaloms, banked turns, and sprawling layout reminiscent of its manufacturers best designs, Gold Striker has also taken the very Cedar-Fair-style claim of being the tallest and fastest wooden roller coaster in Northern California. 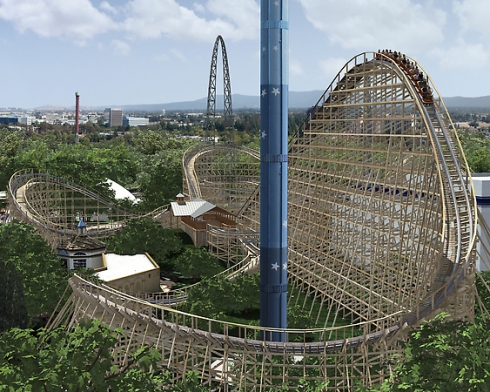 With a 103 foot first drop and a top speed of 54 miles per hour, Gold Striker’s statistics are reputable, but it’s the character of the wooden coaster that’s sure to get noticed.

The ride features a double-down first drop that also spirals around the park’s Sky Tower observation deck. Though absent in concept art, the park also announced that that unique and disorienting drop will take place in an unclosed tunnel (which, again, Cedar Fair’s hype department touts as the world’s longest enclosed first drop on a wooden roller coaster).

The ride that follows that drop is surprisingly short on height, opting instead for GCI’s penchant for low-to-the-ground turns resulting in relentless speed that lasts until the final brake run. Through its 2:30 course, the ride will pass through an 80-degree banked turn, a station fly-by, and a myriad of hops and curves and straightaways that will leave riders guessing what’s to come. 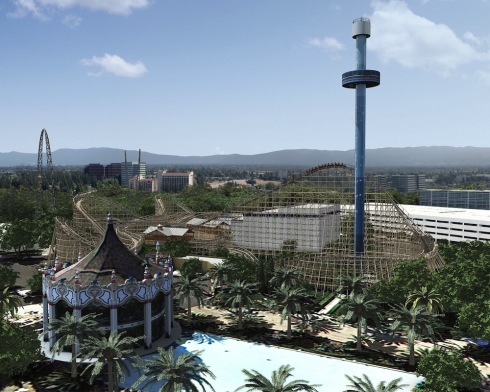 In a year marked by hybrid-wooden and not-even-made-of-wood wooden coasters, Gold Striker is a breath a fresh air. While it may not have the hype, the statistics, or the allure of those (albeit, astounding) new takes on the wooden roller coaster concept, it does have a traditional look and feel that’s perfect for the mid-sized California’s Great America and a jump-start to that park’s pulse.

As is standard for Cedar Fair, auctions to win the “first rides” on Gold Striker are currently underway through 28 April with bids going to benefit The San Francisco 49ers Foundation, an arm of Operation: Care and Comfort. (No doubt strategically, it’s the San Francisco 49ers whose potential stadium caused all that hubbub for the park to begin with.) Those first rides will take place on 1 May.

Gold Striker may not fundamentally alter the course of the amusement park industry, and it won’t set any new records in Cedar Fair’s arsenal of massive roller coasters. That said, it’s perfect for California’s Great America and a testament to the chain’s commitment to classic endeavors even as other chains reach for something more flashy.

Is This The REAL Roller Coaster Capital of the US? Here Are 8 Reasons it Could Be...

The 10 WORST Theme Park Rides To "Pop The Question" On