How to Save Time at Blackpool Pleasure Beach 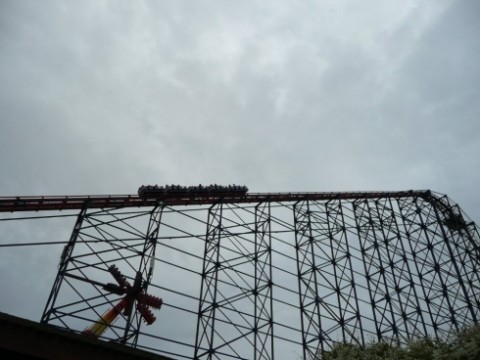 While it’s packed into a relatively compact area, Blackpool Pleasure Beach features a huge number of rides and attractions. On busy days, queues for the most popular rides can build-up fairly early in the day, particularly for The Big One and the low-capacity rides in Nickelodeon Land.

Seeing everything you want to in a single day is a challenge, although it is possible when the park remains open until 8pm. You can avoid the worst of the lines by planning ahead and using the simple tips we’ve outlined below:

If you can, avoid visiting Blackpool Pleasure Beach during the school holidays and on Saturdays. Sundays and weekdays are usually the least busy, although you will find operating hours shortened and some rides closed or operating on shorter schedules.

Aim to get to Blackpool Pleasure Beach at least 45 minutes ahead of its scheduled opening time, particularly if you need to buy or collect tickets (the Ticket Centre at the entrance can get very busy). You’ll be able to be first in line for popular rides such as The Big One, saving you hours later on.

Don't start at the front of the park

The rides towards the front of the park (such as the Flying Machines) get busy early, as many guests head straight to them. Come back later when queues have died down. The Big One also attracts queues early on, with many guests racing straight to it. We suggest you do the same, as long as you’ve arrived early enough to be at the front of the line.

Some of Blackpool Pleasure Beach’s rides process queues at an agonisingly slow pace, particularly flat rides aimed at younger guests. The worst offenders are the attractions in Nickelodeon Land, the Convoy Ride and Grand Prix – hit these early.

Choose when you plan to eat carefully

Blackpool Pleasure Beach’s restaurants are very busy between 11am and 1pm and 5-6.30pm. If you can eat either side of this window, then do. You’ll find the queues for major rides slightly shorter while others are tucking into their lunch. You can always nip out of the park for some fish and chips or a sandwich by the sea later on when the queues have built up.

Turn to the dark side and buy Speedy Pass tickets

We hate it when theme parks charge extra for queue-jumping options, which leave everyone else in the park feeling like second-class citizens. It’s slightly less irritating at Blackpool Pleasure Beach, though, given that it’s still (at least partially) a pay-per-ride park.

If you must, or you’re desperate, you can buy Speedy Pass tickets that enable you to reserve time slots to ride major attractions including Alice Ride, Ice Blast, Valhalla, Derby Racer, Grand Prix, Flying Machines, The Big One, Infusion, Nickelodeon Streak, Big Dipper, Grand National and the River Caves. VIP Speedy Passes are more expensive, and cut queue times further. Still, you shouldn’t really need these to experience what you want to at Blackpool Pleasure Beach, even on busy days.