Insider Review: Pirates of the Caribbean at Disney's Magic Kingdom 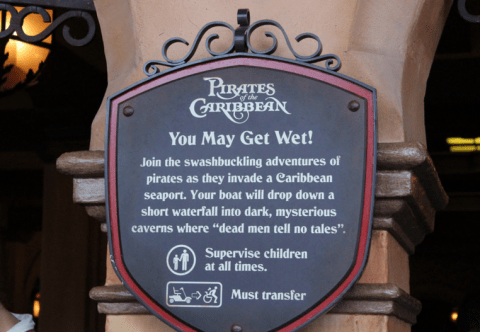 Theme Park Tourist writer Amy is a former Walt Disney World Cast Member, who once worked on Pirates of the Caribbean. Here, she offers an in-depth look at the popular attraction at the Magic Kingdom.

Though Pirates of the Caribbean is a staple of the Magic Kingdom at Walt Disney World today, few visitors realize just how close it came to not being included at all. As the final attraction that Walt Disney personally had a hand in at California’s Disneyland, many felt that the Pirates ride would be a sure winner at the new resort being built in Florida. However the Imagineers felt differently.

The original Pirates of the Caribbean was heavily themed around New Orleans and creators felt that this would hit too close to home in Florida to have the same intrigue. However, early park guests flooded Guest Relations with complaints about the missing rouges, and plans were set into motion to bring the buccaneers east. 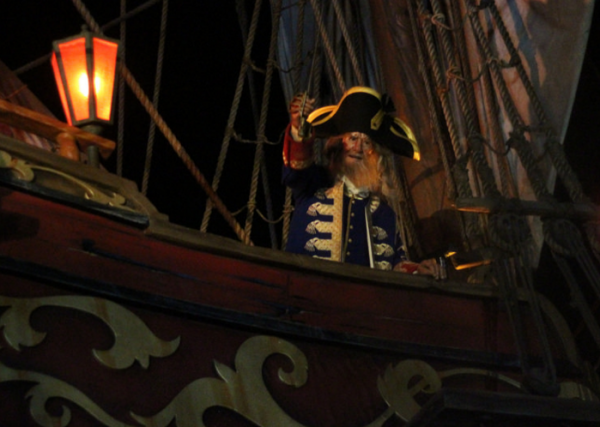 Today, Pirates of the Caribbean is one of the true jewels of Adventureland. The Castillo Del Morro, the castle that the attraction is housed in, looms over the land nestled between the Walt Disney World Railroad and the rivers of the Jungle Cruise. The attraction is so popular that it has spawned four movies, numerous video games, a walk-through attraction at Disney’s Hollywood Studios, and a stage show held across the street in Adventureland hosted by the legendary Jack Sparrow.

The attraction itself has come a long way from its opening day back in 1973. When it first opened, Pirates of the Caribbean featured a scene where the pirates chased attractive women around the village. One pirate, referred to as the “Pooped Pirate,” was only tired because he wrestled the dressing gown from the body of an attractive young woman, who happened to be stuck in the large barrel he was leaning on. These scenes were eventually deemed too risqué, and were changed. Now the women hold various household items and chase the pirates, and the Pooped Pirate became a giant glutton, holding a large turkey leg. Incidentally, the young naked woman was replaced by a cat popping its head out of the barrel.

In 2006, more changes were made. To correspond with the immensely popular 2003 film Pirates of the Caribbean – Curse of the Black Pearl and its 2006 sequel, Pirates of the Caribbean – Dead Man’s Chest, characters from the films were added to the existing scenes throughout the ride. After leaving the loading port, Davy Jones eerily appeared in a mist screen projection as the boat travels toward the skeleton-laden beach. After enduring the plummet, you'll see that Captain Barbosa is now the commanding officer of the Wicked Wench, and he orders the firing on the nearby fort, demanding the return of Jack Sparrow. 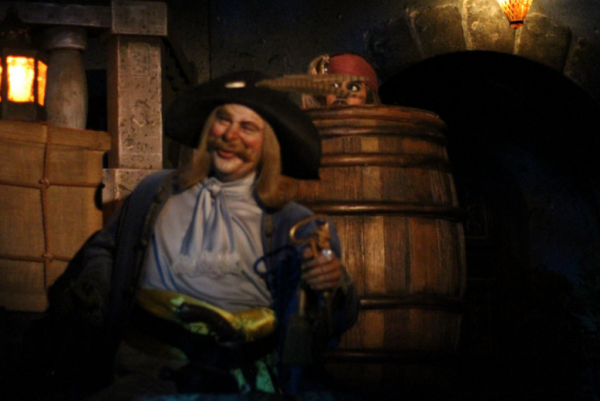 Unknown to Barbosa, Captain Jack is just around the corner, watching the town mayor get dunked in the well. This is one of only three advanced A-100 animatronics found on property (the Wicked Witch of the West in the Great Movie Ride and the Yeti of Expedition Everest are the other two).

Further on, the Pooped Pirate now holds a key and treasure map to the town’s gold supply. While the pirate boasts about how he outsmarted Jack Sparrow, Jack is in the barrel behind him, listening intently to every word. Later, in the treasure room, we find Captain Jack enjoying the spoils of his pillaging by singing and drinking from a well-decorated goblet. As the guests make their way up the moving walkway back to the gift shop, Davy Jones was heard warning them to watch their step, or they might be meeting him much sooner than they’d like.

Along with the additions to the ride, the attached gift shop also saw a few changes. The space was redone to allow for the larger guest flow, and props from the two existing films were hidden among the collection of random pirate debris along the tops of the shelves. The pirate coin necklace that Elizabeth Swann wears in the first film can be found, along with the key to Davy Jones’ chest.

In 2011, additional changes were made to the Pirates of the Caribbean attraction. With the release of the fourth film, Pirates of the Caribbean – On Stranger Tides, the character of Blackbeard replaced the visage of Davy Jones in the mist screen projection, along with the cautionary tale as the guests exit back up to the gift shop. After passing Blackbeard, you hear the haunting strains of mermaid song. On either side of the boat is an underwater projection of a surfacing mermaid. Along with the visual projection on the water is an accompanying splash of the mermaid’s tail. Past this on the beach ahead, mixed in with the decaying bodies of dead pirates is the skeleton of a mermaid, noticeable by her large, fish-like tail. 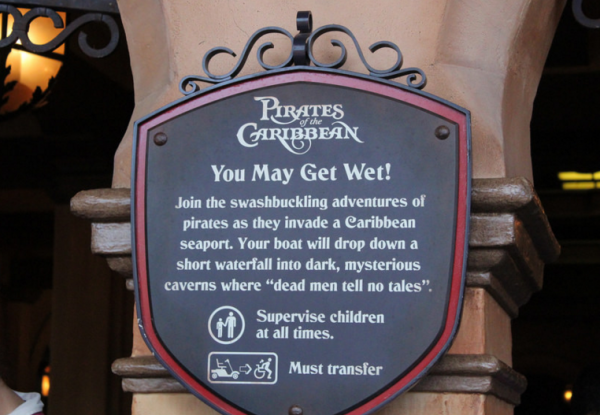 Though most people believe that only pirates reside at the Pirates of the Caribbean attraction, Cast Members who have worked there know that they aren’t alone. A ghost by the name of George also makes his home in the building. As legend goes, a welder fell from the tallest tower in the attraction construction and has never left. This tower, located in the blazing town scene, is called George’s Tower. The Cast Members make sure that each day they say “Good morning,” or “Good night” to George, or the resulting day will be nothing but disastrous. George also has his own door that has been known to open and close on its own. It is to the left of the dog holding the key in the jail scene.

One Cast Member related a story of assisting in the reset of the attraction after a downtime. He was at the very top of the drop hill, waiting to press a button when he heard loud groans and other noises. He picked up the nearby phone and told the person in the control tower that their joke of making scary noises over the PA wasn’t funny. He was horrified to find out that the Cast Member wasn’t making the noises.

Though visitors today may associate Pirates of the Caribbean more with the films than the original attraction borne of Walt's imagination, this is one Disney highlight that's proven how attractions can seamlessly blend classic characteristics with modern additions to create a fan favorite that's sure to endure for generations.