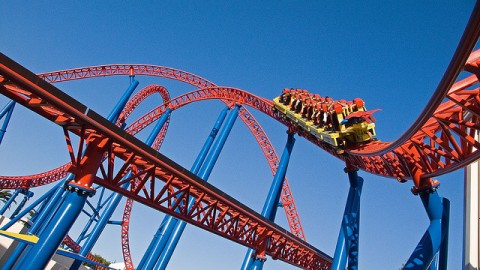 Australia’s Gold Coast offers the perfect climate for a day out, and it’s no surprise that a variety of attractions have emerged to meet this need. This includes an impressive line-up of theme parks that makes the region one of the world’s most significant hot-spots for thrill rides and family fun. Whether you’re a hardcore adrenaline junkie, or simply looking for entertaining experiences to share with your kids, all of the Gold Coast’s three major theme parks have something to offer. 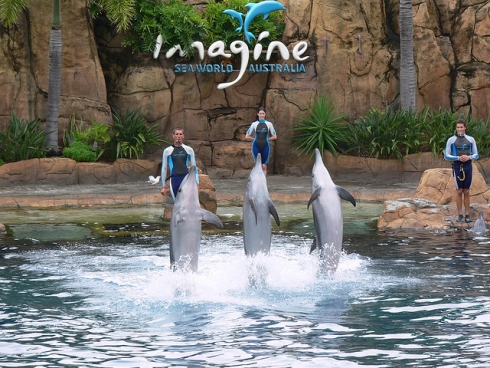 Located in Surfers Paradise, Sea World is not to be confused with the American SeaWorld chain. However, it does offer a similar combination of marine-life exhibits and theme park rides, making it one of the region’s most enduringly popular visitor attractions. It also features an adjacent water park, which carries a separate entry fee.

As its name suggests, Sea World’s most unique offering is its selection of exhibits and shows that offer an insight into the creatures that live in the waters off the Gold Coast and beyond. Among the most popular are Penguin Encounter (an Antarctic-themed penguin habitat), Polar Bear Shores (Australia’s only polar bear exhibit, which offers multiple viewing perspectives) and the Dolphin Nursery Pool (a major part of the park’s breeding program). Seals and dolphins also perform in daily shows.

SeaWorld’s ride line-up includes two major roller coasters. Jet Rescue sees riders boarding a “jet ski”, and is themed around a mission to save marine creatures. Sea Viper, meanwhile, has been operating for three decades and features a number of inversions in its twisting, turning circuit. Two areas, Beach Break Bayand Castaway Bay, are dedicated to children’s attractions, while the Viking’s Revenge flume ride can be enjoyed together as a family.

Don’t miss: Shark Bay, the world’s largest artificial lagoon for sharks. If you’re fascinated by the ocean’s predators, this is one of the best exhibits anywhere to see them up-close. 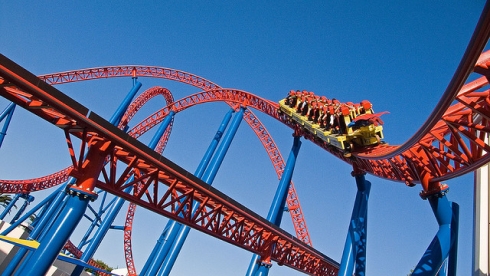 Known by locals simply as “Movie World”, Warner Bros. Movie World is designed to offer a similar experience to the famous Universal Studios parks. Unlike many other parks which claim to educate guests about the movie-making process, it is actually home to a real, working studio at which a variety of films and TV series are produced.

The major attractions at the park are its selection of roller coaster and its daily shows. The coasters include Green Lantern Coaster, which opened in 2011 and features the steepest drop of any roller coaster in the Southern Hemisphere, and Arkham Asylum – Shock Therapy, Australia’s first inverted roller coaster (which was previously themed around Mel Gibson’s Lethal Weapon movies). The shows include the death-defying Hollywood Stunt Driver and the high-tech Journey to the Center of the Earth 4-D Adventure.

Two of the highlights in Warner Bros. Movie World’s annual calendar are its Fright Nights Halloween celebrations and the festive White Christmas events. The latter sees areas of the park covered in artificial snow, and lit up by more than a million twinkling lights. There’s also the chance to board the Polar Express to the North Pole, in a special 4-D experience.

Don’t miss: Superman Escape, the park’s headline roller coaster, which launches riders from 0 to 62 miles per hour in just 2 seconds. 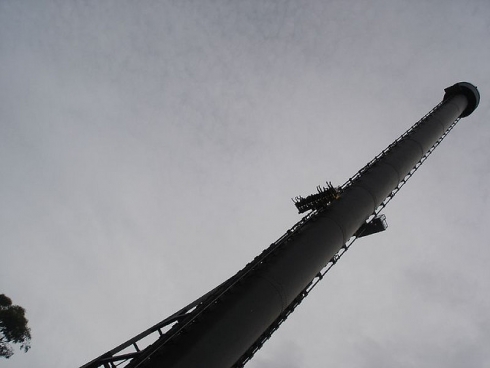 The largest theme park on the Gold Coast, and indeed in all of Australia, is Dreamworld. It packs four roller coasters and dozens of other rides into a number of themed lands, alongside a variety of animal exhibits and shows. Adjacent to the theme park itself sits Whitewater World, a separately-ticketed water park.

A number of major additions have been made to Dreamworld following its 30th anniversary celebrations in 2010. This includes the Buzzsaw roller coaster, which features an unusual lift hill that leaves riders dangling upside before plummeting through a loop towards the ground below. Another recent addition, Shockwave, sees guests spinning rapidly as they travel up and down a coaster-style track.

The new attractions have added to an impressive line-up that also features a variety of kids’ rides, including an area dedicated to the Wiggles. The park’s Australian Wildlife Experience (soon to be renamed as the Aboriginal Wildlife Experience) is also very popular with visitors to the area, and offers a variety of exhibit and shows. This includes one of the most unusual theme park attractions you are likely to find anywhere in the world – the Australian Sheep Shearing Show.

Don’t miss: Tower of Terror II, a terrifying roller coaster in which guests are launched backwards at speeds of up to 100 miles per hour up a 377-feet-tall tower, before plummeting back into the station in a forwards direction.

All of the theme parks on Australia’s Gold Coast offer a fantastic day out, and you’ll be left satisfied whichever one you opt to visit. Visiting all three is highly recommended, though, as each offers a slightly different twist on the traditional theme park experience.

You failed to mention Wet N Wild, which although isn't a Theme Park, it does have an Intamin Half Pipe Coaster!