Disney's "floating Omnimover" patent granted - but where will it be used? 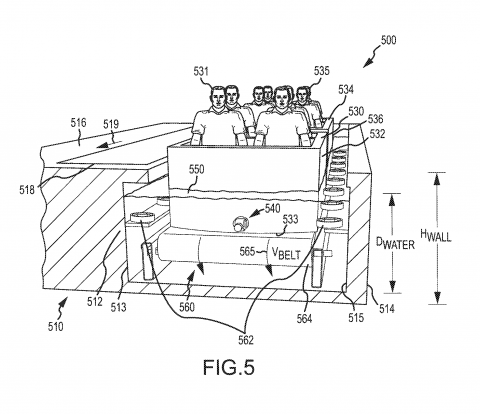 The US Patents and Trademarks Office has granted Disney a patent on a new ride system which resembles a floating version of the company's classic Omnimover rides. But are there active plans to use the invention, and where could it crop up first?

Made famous by the Haunted Mansion rides at Disneyland and Disney's Magic Kingdom, the Omnimover was developed by WED Enterprise's Roger Broggie and Bert Brundage. It consists of a series of small vehicles that are linked together in a continously-moving chain, and has two main advantages. Firstly, the ride's capacity is extremely high due to its non-stop motion. Secondly, the cars can be spun, enabling the attraction's designers to control the riders' line of site.

Disney's latest patent, which can be read in full here, essentially describes a water-based version of the Omnimover. A large number of boats would be linked together, and would be propelled around the circuit at a constant, controlled speed by a pump station. 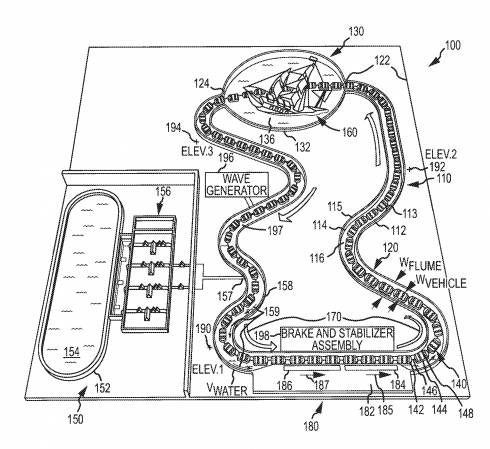 A pump system will be used to propel the Omnimover boats around a channel.
Image © Disney

The summary of the invention in the patent application reads:

A floating omnimover ride with high capacity throughput and enhanced control over speeds of passenger boats. The ride includes a water containment structure with spaced apart sidewalls defining an elongated guide channel that defines a loop-shaped ride path or circuit. The ride includes a volume of liquid contained in the guide channel to a desired depth. The ride also includes a chain of passenger boats floating in the liquid contained in the guide channel. Each of the boats is linked to the two adjacent boats with a connecting link such that the chain of boats is a continuous loop. The chain of boats has a length that is approximately equal to a length of the ride path, and during operation of the ride, the boats in the chain are moved along the loop-shaped ride path at a predefined rate by a pump station moving the liquid in the guide channel. 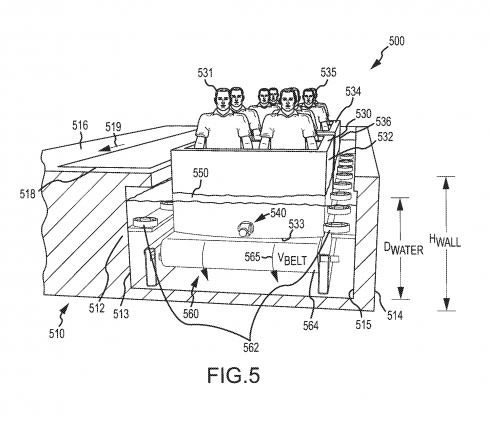 A belt will be employed in the ride's loading station.
Image © Disney 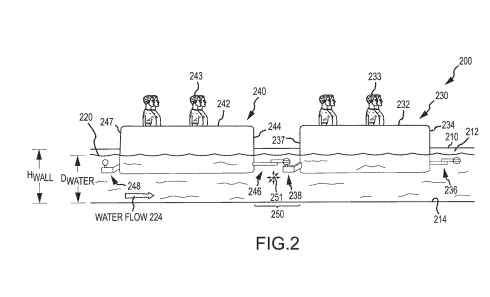 The Omnimover boats will be connected together.
Image © Disney

Intriguingly, though, the Omnimover boat system may provide more freedom and flexibility than the dry-land versions. In its application, Disney suggests that the boats may break free from the chain at key points in the ride, allowing a "free-floating" section. This would essentially enable a combination of the Omnimover ride experience with a more traditional boat ride.

A new innovation for Shanghai Disneyland?

Companies like Disney file patents all the time - it's a way of protecting their investment in research and development, and provides a defence against patent lawsuits from other firms. Many of those patents are never implemented in the real-world - they exist purely in theory. So will that be the case for the floating Omnimover? Rumors suggest not.

The strongest of the current rumors suggests that the new system will be used at the under-construction Shanghai Disneyland, where it could enable a radically-different Pirates of the Caribbean experience. However, previous reports have suggested that an entirely different ride system will be used for that attraction - one which uses underwater magnets to enable precise control over individual boat movements. 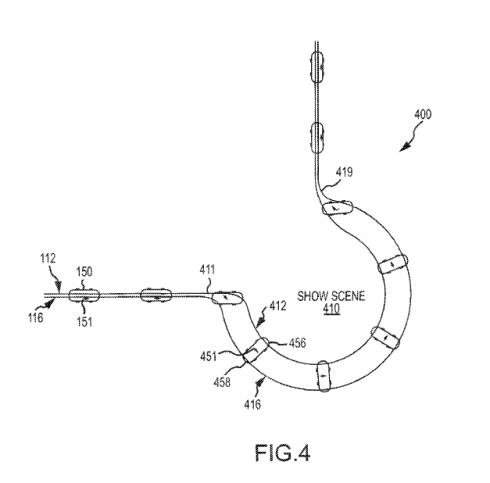 A combination of magnets and a track would control the boats if Disney's other water ride patent is employed. Image © Disney

Of course, it may be that Disney has evolved its plans for Shanghai Disneyland's Pirates of the Caribbean (and a long-rumored version of the ride for Hong Kong Disneyland) to incorporate the floating Omnimover system. Alternatively, the system could be employed by another of the park's attractions, such as the boat ride that is expected to run through the park's Enchanted Storybook Castle.

Housed partially on the ground floor of the same building that will host Avatar Land's headline flying attraction, the boat ride is described as a "C Ticket" attraction. Speculation suggests that Disney will use advanced audio-animatronics to bring to life the inhabitants of Pandora as guests travel around the circuit.

Disney's new system certainly offers the potential to enable new types of water ride experience. The ability to feature "free-floating" sections would even enable it to be used as part of Splash Mountain-style flume rides, as well as slower-paced dark rides. How would you like to see the company exploit its invention?

I love the idea! Awesome!