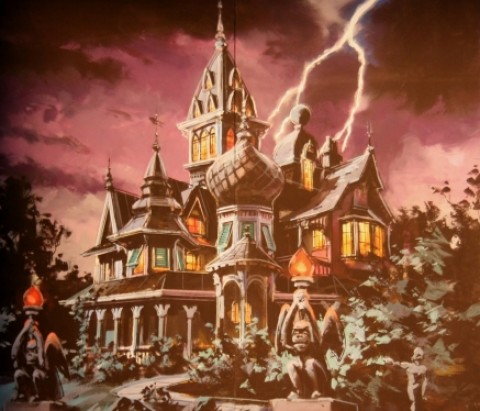 Some parents track their child’s growth with a carved notch on a doorframe; others take an annual photo in front of a landmark. But for the park-going crowd, a child’s maturity is most dutifully measured by his or her willingness to confront the “terrors” that await inside any number of ghostly manors at Disney Parks across the globe. Hong Kong Disneyland is now ready to join its sister parks as the fifth home to a menacing mansion, but this one is poised to be a bit different.

In 1969, Walt’s brainchild Haunted Mansion opened at the original Disneyland Park, set inside a stately white Antebellum plantation house befitting of the park’s New Orleans Square area. At Walt Disney World’s Magic Kingdom the ride reformed within a nautical red-bricked New England estate in the new park’s colonial Liberty Square. Tokyo’s version duplicated Florida’s, but with a tattered and decrepit look that set an eerie chill in that park’s Fantasyland. 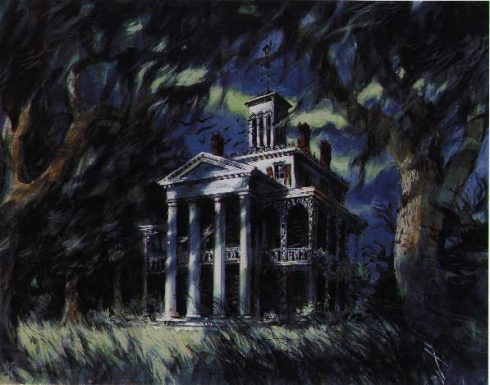 Disneyland's original haunted mansion set a new standard for haunted houses. First, that every park should have one; second, that they could be family-friendly. Image © Disney.

Disneyland Paris was the first to deviate from the tried-and-true formula. There, the ride (renamed Phantom Manor) was placed in Frontierland and – true to the park’s incredible, immersive depth – had an intricate back-story recounting the tragic tale of the Ravenswood family. Wealthy gold tycoon Mr. Ravenswood just couldn’t take it when his beautiful daughter fell for a lowly miner drilling in the family’s Big Thunder Mountain. A few “accidents” later and you have a haunting tale of lost love and a ride that’s significantly darker than its overseas cousins.

Where To Put It?

When it came time for the infamously small Hong Kong Disneyland to receive its version of the staple attraction, heads spun. Where would it be located? That park, after all, only has Main Street, U.S.A., Adventureland, Fantasyland, and Tomorrowland, and precedent had set that all Haunted Mansions were located in different themed lands at their respective parks.

The answer was unexpected. The unassuming mini-park announced an ambitious expansion that would place three brand new, totally-original lands outside of the park’s traditional boundaries and create a layout that no other Disney Park on Earth shared. First, Toy Story Land (a virtual clone of the Walt Disney Studios, Paris' Toy Story Playland) opened to equally lukewarm reception for its low capacity rides. The park’s second original land, Grizzly Gulch, opened this summer as a new take on Frontierland lovingly mixed with Disney California Adventure’s bear-shaped mountain peak. 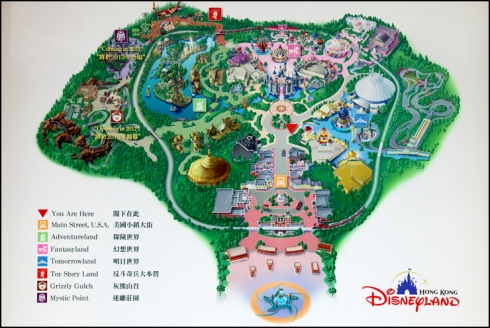 And in 2013, the final expansion will open when the park welcomes its third original land: Mystic Point. 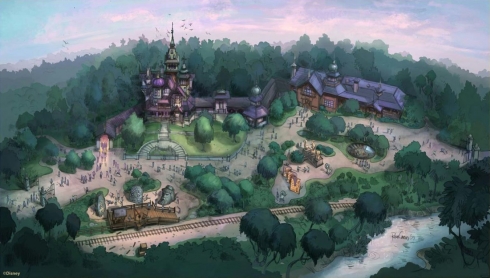 The eerie Mystic Point will be the first of its kind in any Disney Park. Image © Disney.

Mystic Point will be perhaps the most atmospheric Disney Park land to date. With its eerie, foggy, quasi-jungle theme, this land’s mish-mash of time periods and architecture will be familiar to real world travelers for more reasons than one: While the eclectic remnants of ages past are authentic enough, this land also has an unexpected connection to a distant place: Tokyo’s DisneySea park. The elite Society of Explorers and Adventures that the land’s Lord Henry Mystic traveled the globe with is also responsible for Harrison Hightower, proprietor of Tokyo’s Twilight-Zone-free Tower of Terror. 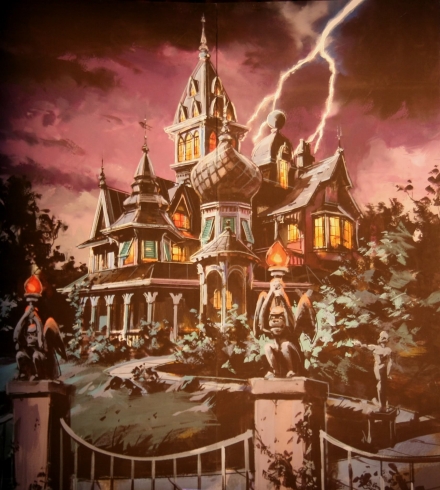 Visitors can stroll around Mystic Point where soggy, misty grounds give way to oversized statues, crumbling pillars, and treasures of the past that have been collected by the benevolent Lord Mystic. Likely to the tune of an old-time radio playing jazzy Hollywoodland standards, this area will prove equally as haunting as the famed queue line for the Twilight Zone Tower of Terror attractions.

But the real haunting begins in the manor on the hill.

Mystic Manor itself abandons all precedent and rebuilds the “haunted house” ride from scratch. Forget 999 happy haunts, graveyards, and ghostly dinner parties – the forces of Mystic Manor are much older, and much stranger. The house, like the rest of the land, is an odd representation of dozens of cultures and architectural styles all sewn together into a surprisingly handsome mansion. 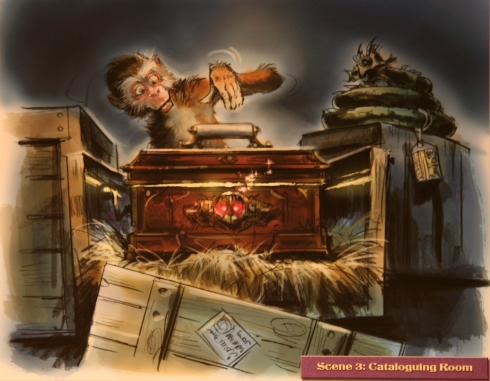 In the mansion's cataloguing room where ancient treasures are sorted, Lord Mystic's trusty (but mischievous) friend Albert gets a little too curious with a cursed music box. Image © Disney.

The inside of the home, we find, is just as foreign. Lord Mystic’s collection represents limitless cultures that recount his turn-of-the-century tour around the globe to remote locales. One particularly interesting piece of the collection is an old music box that has never been opened... until Lord Mystic’s curious friend (who, by the way, is a monkey) decides to see what’s inside. 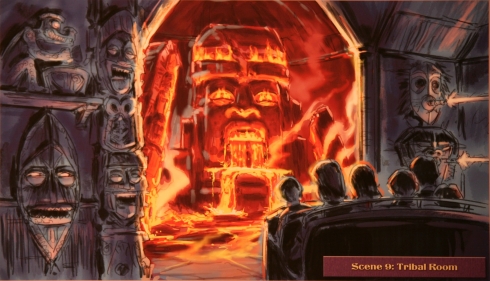 A close encounter with a lava-spewing Polynesian god appears as one of the more menacing scenes from the new attraction. Image © Disney.

The power released by the music box spreads through the house, bringing all of the home’s ancient artifacts (and the spirits that lie within) to life. What exactly will occur within the ride is (you guessed it) a mystery, but concept art displays scenes that are sure to delight: a medieval cannon blasting smoke rings and a corridor where an ancient booby-trap sends darts whizzing past riders (both effects likely based on the two international versions of the Indiana Jones Adventure).

In another scene, a Nordic god appears to breathe icy air across riders before they separately encounter an imposing Polynesian totem with red hot lava spilling from its mouth. 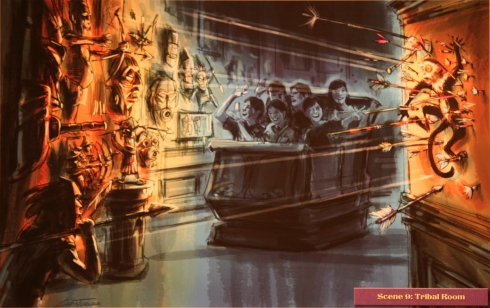 Albert - who is rumored to take on a more cartoon-ish form in the ride's final version - will provide comical mischief throughout the ride.

But even beyond the concept art, speculation has fans on the edge of their seat about the ride’s conveyance system. Gone is the tried-and-true Omnimover, a slow-moving conveyer belt system used in the other Haunted Mansions and on the new Little Mermaid rides in the U.S. Instead, rumors point to a re-use of the trackless, computer-guided system used in Tokyo’s Pooh’s Hunny Hunt and Aquatopia. Should that prove to be true, guests seated in golden sleighs will find themselves gliding about through the house; elegantly pulling into scenes, then backing out of them; even participating in close-encounter “dances” with other vehicles in a precisely choreographed encounter guided by a local positioning system. 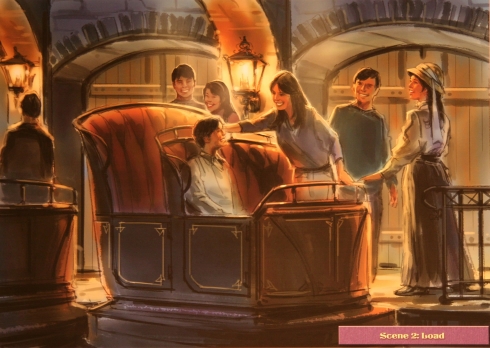 The ride's sleighs may add as much to the experience as the props and effects. Sometimes resembling 4D motion-base vehicles (like DarKastle or Transformers) rumors persist that computer-guided carts will be used.

Mystic Manor is sure to be the envy of Disney fans across the globe. It’s an incredible evolution of the Haunted Mansion concept, and boldly combines that timeless attraction with the atmosphere of the Tower of Terror and the ancient-curse genre of Indiana Jones Adventure, all wrapped up in a beautiful package with already-likable characters.

Mystic Manor seems poised to represent the next generation in Disney Parks technology and storytelling, and it appears that it will be worth the wait.

Why is it taking so long to build a trackless system in the US. Something like this would be perfect for California Adventure to really put that park on top. Maybe themed to the Winchester Mystery house? I worry that Disney is going to lose the momentus of Carsland by waiting too long to get going on another E ticket.