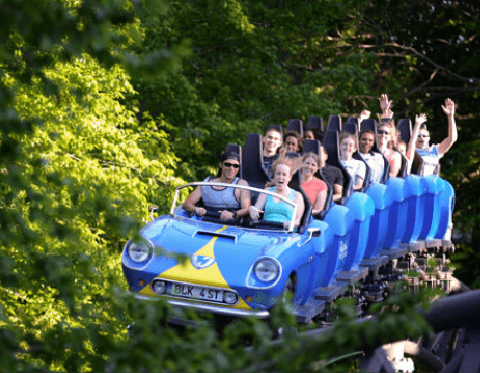 The Black Forest has a score to settle with the puny mortals of Busch Gardens Williamsburg.

Celebrating its twenty-second year of being named “the most beautiful theme park on Earth,” it’s ironic that Busch Gardens Williamsburg’s new ride lets the park’s famous Virginian forests come to life and fight back.

Since 1984, Arrow’s suspended Big Bad Wolf roller coaster slalomed through the wooded hills west of the park’s Oktoberfest area, recalling the classic German fairy tale of old. That coaster operated until 2009 (by which point it was one of a half-dozen or so suspended coasters to remain in operation), and its removal immediately sparked a number of rumors that the European-themed park may soon expand.

Last year, the Oktoberfest area was completely re-designed with new restaurants, new facades, new music, new entertainment, and the new Mãch Tower drop ride, though the woods continued to remain empty. Finally, hints began to accumulate, with much speculation hinting that Oktoberfest would finally get a new roller coaster to replace the much-loved suspended ride.

Now, a new roller coaster slaloms through that forest once again. But the question remains – how does Verbolten compare to the revered Big Bad Wolf?

Spoiler warning: This review contains significant spoilers - do not read on if you do not wish to know more about the Verbolten ride experience. 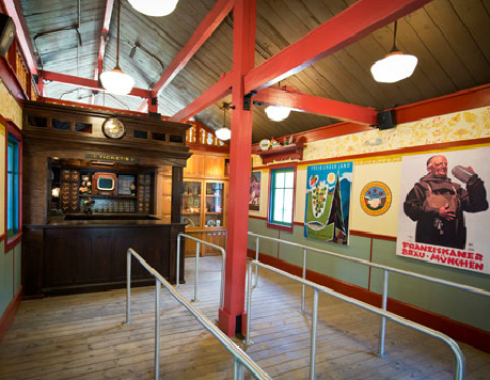 The queue wraps through the first of two offices - a bright, cheery tourist center overseen by hostess Gerta via television monitors advertising the fantastic sights of Germany we're about to fahrt around! Image © SeaWorld Parks.

Though Busch Gardens is revered for its themed environments, entertainment offerings, and cultural cuisine, it’s true that their roller coasters had never involved a real story. While the Loch Ness Monster coaster in Scotland does adequately recall the Scottish myth, there’s not much to specifically set up a story or location.

On Verbolten, though, particular attention is paid to the story. You’re entering “Gerta and Gunter’s Tours and Rentals,” a quaint German tour company whose bright, festive exterior matches the rest of Oktoberfest perfectly. The only sign that something’s amiss is the red sports car crashed into a stone wall outside – it’s engine tries to turn over every few minutes, but the gnarly, poison-looking vines crawling through the interior and out from under the hood seem to make that a challenge.

But these things happen, so the queue progresses through the warm, inviting visitors center where Gerta – still dressed in her Oktoberfest best – has recorded a quick video played over antique television sets to welcome you. She teaches you the German word for travel (“fahrt”) and welcomes you to do so all over the countryside. But, she warns, do not enter ze Black Forest! It ist verboten!

For a few steps, the queue travels through a second office out back. This one belongs to Gunter, Gerta’s never-seen brother. A tattered map, rusted instruments, and vicious looking vines behind glass reveal a darker element to the ride, and voicemails that play in the dark, musty office reveal that Gunter’s dark fascination with the nearby Black Forest may take a sinister turn... Finally a ramp leads to the open-air automobile repair shop where luggage conveyer belts travel above the sleek German roadsters that function as our trains through the forest. 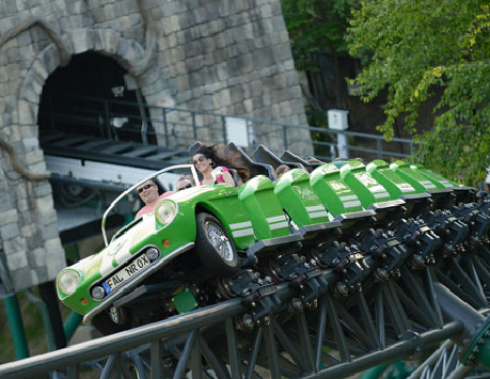 German roadster trains navigate the outdoor sections of the ride with the entrance to the Black Forest visible in the background. Image © SeaWorld Parks.

Outside the station, a revving engine sounds as the car glides effortlessly into a few S-curves. It’s a short and sweet moment of smoothness until an ancient stone wall appears ahead with vines curling out. Most visitors seemed completely thrown by the launch – there are no other examples of launched coasters in the park, and nearby Kings Dominion’s happen at the beginning of their respective launched coasters, not halfway through).

The bulk of the ride experience occurs in the ride building. It’s much more extreme than I expected, with absolute pitch-black darkness accompanying the first surprising drops and rabid turns. Most surprisingly of all, enormous and detailed set pieces begin to appear – all beautifully done and fully illuminated via a timed lighting program in the building. Not Revenge of the Mummy style blacklight strobes – real sets that stretch up the height of the building.

At one point, a beautiful spinning moon appears in the center of a helix, while on the midcourse breaks, lights suddenly turn up to reveal the truly beautiful depths of the Black Forest just before the car dives into the tangled vines and roots along the floor. All were totally unexpected and completely uncaptured by the POV videos available online to date.

The ultra-mysterious drop track follows, but in a twist no one expected, the ride offers three different scenarios that befall riders, each triggering different lights, soundtracks, sets, and effects. I won’t give them all away, but suffice it to say, you’ll either be terrorized by a pack of red-eyed wolves (an homage to the site’s original tenant), caught in a loud thunderstorm, or lulled into the twisted branches by a malevolent spirit of the forest whose final words to you resemble “You are lost.”

Suffice it to say, each person in my travel party preferred a different one, and all are absolutely incredible. Even so, all are underscored by the dramatic moment of absolute silence before the ride's signature free-fall drop. I think for most people - but especially first-time riders - the soon-to-be-activated on-ride video recorders will capture a moment of absolute terror as the track suddenly gives way. Unlike the similar Thirteen coaster at Alton Towers, Busch Gardens' officials fessed up to the trick before opening the ride. This is actually twice beneficial: people don't have the lofty expectations that Thirteen ultimately failed from, but still don't understand or expect the effect.

After the freefall drop of maybe fifteen feet, the train travels down a hill, hits the second (and faster) of the two launches, speeds out of the building, around a dramatic curve, and lands atop a massive, creaking covered wooden bridge ninety feet above the Rhine River below (the only part of the ride visible to onlookers). Brakes slow the train to see the impending doom before it races down the hill, skims the waters edge, and makes a few final turns before the station, having reached its highest speeds just at the end (resembling an inch-by-inch recreation of Big Bad Wolf’s famous finale). 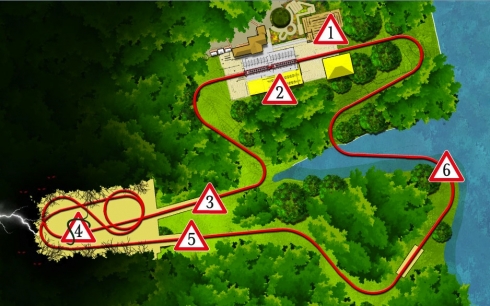 The only downside to Verbolten that I could see is operations. Previously having worked almost exclusively with ultra-reliable B&M, Busch Gardens now has a ride with three finicky elements that rely heavily on technology. The ride closed for the better part of an hour on my first visit with all three trains stacked with passengers on the final break runs. It took the crew forty-five minutes to unload said passengers (despite all being in easily unloaded areas).

Oddest of all, during the closure the park kept the queue open, allowing new guests to enter. Most parks close the queue, allowing already-waiting guests to continue in line if they wish, but not letting new guests join in. Again this is probably a symptom of the park never having dealt with rides that break down frequently (which, by its very nature, Verbolten is sure to do).

The ride also has a double station where two trains can load at once. Unfortunately, I saw each station used intermittently though both were packed with people. Only on the rare occasion did both trains manage to load at once. Other times, only the first station was used at all, decreasing the ride’s capacity by quite a bit and requiring exiting guests to wait twice as long on the train. 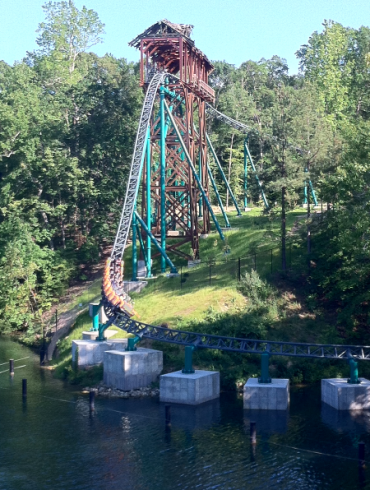 The ride's finale is almost identical to the final moments of the Big Bad Wolf, even re-using some basic concrete supports for the iconic river dive. It's also the only part of the forested ride visible to onlookers.

Verbolten is satisfyingly long, yet we desperately wished it could be longer. The technology is astounding and the innards of the “Black Forest” show building are absolutely stunning, creating a much wilder ride than anticipated. Best of all, the magnificent technology almost requires a dramatic storyline to really give it life, thus virtually barring competitors Six Flags or Cedar Fair from retaliating with a “tallest drop coaster on Earth” attempt. We’ve got to hand it to Zierer, the manufacturers here who are otherwise known almost exclusively for their kiddie-sized coasters – Verbolten represents the smoothness and innovation of Intamin with the wild force of a Premier creation.

The park's horticulture blog made a fuss about the shrubs and bushes planned to surround the newly-developed land around the ride, but pine trees and thick deciduous trees fit the bill far more, and would do a better job hiding the green showbuilding that's currently in a grassy field. A line of trees would also make the second launch out of the building an easier transition and create an optical illusion of impending collision just before swooping up into the bridge, but all that will doubtlessly come in time.

Verbolten is a fantastic ride and an absolute home run for Busch Gardens. Like Alton Towers’ Thirteen, it’s a great transition-to-bigger-rides family coaster but with enough speed to keep teens and thrill seekers salivating. People loved it. 95% of riders were smiling and laughing as they reached the brake run while the other 5% were literally crying (some from joy, some from legitimate terror). What more could Busch Gardens have asked for from it? Verbolten can’t be missed.

Auff wiedershean. This is a brilliant and well made ride. It's defiantly not a kiddie ride. It's very intense actually. I highly recommend to not bring young children on this ride because my 12 year old sister cried and didn't ride ANY roller coasters for the rest of the day. But this is a very intense ride. It is by far my favorite rollercoaster I've ever been on. And I've rode ALOT of coasters. BRAVO BUSCH GARDENS!!!!!!! For more info, go to

Verbolten is every bit as thrilling as the Big Bad Wolf. Without the lens of nostalgia, Big Bad Wolf was a family coaster with a beautiful setting. Verbolten can be described in exactly the same terms, but with a more adventurous spirit. Verbolten is an A+ ride that deserves its position in the park! Nothing 'kiddie' about it!