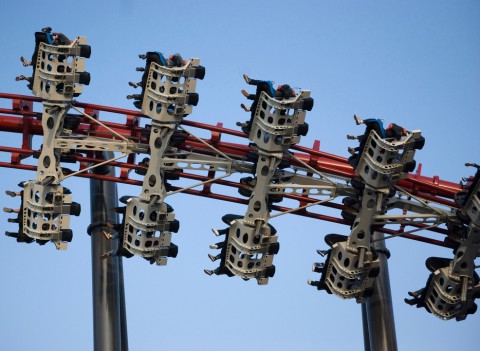 In the old days, the term amusement park was synonymous with flashing incandescent light bulbs over scramblers, elegant carousels with trumpeting band organs, and fun houses full of gags and illusions. You’ll still find that commitment to intimacy in parks across the globe, but the push for thrill has changed the industry and erected palatial parks dedicated to those who seek speed.

Roller coasters are the new definition of amusement parks, and you’d be hard pressed to find a park without one. Whether it’s the classic click-clack of timeless wooden railways or the technologically-oriented, multi-million dollar concoctions of the last few decades, we’ve selected the top five parks that stand as a testament to the power of roller coasters, and to the variety of experiences they provide.

Kings Island’s younger sister, this park is stamped into the dense forests of Virginia, where trees tower high above coasters. But beyond their nearly identical Eiffel Tower icons, Backlot Stunt Coasters, and Flights of Fear, the two parks couldn’t be more different. With completely unique themed areas and a renewed emphasis on thrill under Cedar Fair, this park trumpets the relatively new Intimidator 305 (only the second of Intamin’s giga-coaster lineup, with Millennium Force being the first) with its 300-foot drop that was designed as a hybrid between Millennium Force’s sailing hills and Maverick’s ground-hugging turns. You’ll also find a butter-smooth B&M floorless coaster imported from Ohio’s shuttered Geauga Lake and a few classic wooden coasters hiding in the woods. 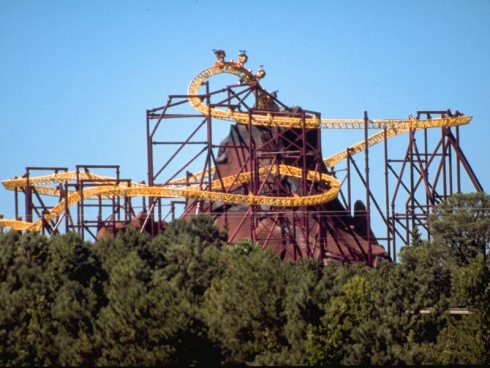 From an explosive intro to a meandering second half, Volcano still exists as an incredible coaster. Image via Cedar Fair.

Don’t miss: Aside from all the fervor around Intimidator 305, the ride to get to here is Volcano: The Blast Coaster. Located within a dramatic volcano structure, this inverted coaster accelerates to 70 miles per hour and whips riders up vertically out of the volcano’s mouth where they immediately invert 155 feet above the ground. It’s over as quickly as it's begun, and past the launch it’s more of a coast than a blazing thrill machine, but it’s one of the most unique and breathtaking coasters you’re likely to find anywhere. Plus, three heartline rolls produce unparalleled sensations in daring riders.

Kings Island’s ride lineup is both historic, legendary, and impressively intimidating. During the park’s early years in the 1970s, the then-record-breaking Racer was born (and subsequently recognized as the start of the Second Golden Age of Roller Coasters). During the park’s tenure under Paramount Pictures, theme became the name of the game, with a suspended Top Gun roller coaster set atop an aircraft carrier, Flight of Fear set within the darkened reaches of outer space, and Backlot Stunt Coaster themed to the special-effects frenzy finale of The Italian Job. With Cedar Fair now at the helm, the massive Diamondback graces the skyline with its incomparably smooth airtime hills. For 2014, the park added the world's longest inverted roller coaster, Banshee. In 2017, the addition of wooden coaster Mystic Timbers will bring the park's coaster count up to 15.

Secluded in the dark woods below tree level, the Beast is recognized for the isolated, pitch-black night rides through unlit woods. Image via Cedar Fair.

Don’t miss: Secluded in the wooded hillsides of Ohio, The Beast still holds the record for being the longest wooden roller coaster in the world. Diving below the tree line, curving against the ground, and barreling through tunnel after tunnel, the Beast can’t be missed.

Who would’ve expected another Cedar Fair park to make the list?  Canada’s Wonderland (the largest theme park in Canada, and the most well-attended seasonal park in Cedar Fair’s chain) boasts 16 roller coasters, including 2012's Leviathan (which, like the other Cedar Fair parks named, has ratcheted up the ante with another 300-foot statistic). The rest of the coasters at Canada’s Wonderland are fairly standard, off-the-shelf fare, but the rides that do stand out do so marvelously, and for the citizens of the True North who would be otherwise deprived, it’s not a bad deal at all.

With its effortless, parabolic layout, Behemoth was the park's signature coaster until the debut of Leviathan in 2012. Image via Cedar Fair.

Don’t miss: Ancient myths tell of a gigantic beast of the earth whose steps shook the ground: Behemoth. Of course, Behemoth has come alive at Canada’s Wonderland as a B&M hyper coaster that sails over airtime hills and through hammerhead turns alongside the park’s tranquil lake. This B&M coaster really helped put the park back on the map (Paramount’s additions – a horrid Zamperla flying coaster and standard Vekoma Suspended Looping Coaster – never did inspire such confidence). 2012’s addition is the mythological sibling, the water-dwelling Leviathan, which outranks his younger brother by a cool 100 feet.

This past week Cedar Point had a visitor killed by the Raptor roller coaster when the visitor scaled a security fence and entered the restricted area under the ride, to retrieve personal items that had fallen from the coaster when they wrode it.