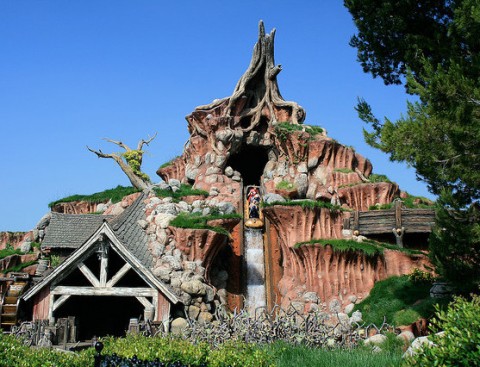 I remember when Splash Mountain opened at Disneyland in 1989. I was 11 years old and a little apprehensive of the steep drop at the end of the log flume ride, but I was also intrigued by the “Zip-A-Dee-Doo-Dah” attraction that my friends had been raving about. I knew the song by heart, but had no idea that it came from Song of the South (or even what Song of the South was at the time).

I was amped and ready to ride, but it would be another year or so before I would have an opportunity to do so. As luck would have it, a log full of riders got stuck at the top of the mountain (and seemed to teeter perilously) for over an hour. I was sufficiently traumatized by the sight and left Bear Country as quickly as I could.

Flash forward 19 years and I still get a little nervous when I board the ride. Yet, I’ve always managed to board the log any time an accompanying friend wants to brave the drop. Any anxiety that I may have quickly fades away as I pass tangled briar patches and Br'er Rabbit’s little home to the delightful tune of “How Do You Do?” – one of the best Disney songs, in my opinion!

The visuals on this ride are amazing with its organic foliage and mountain façade. Even without ever having seen the movie, riders get a perfect sense of the storyline through the elaborate scenes set along a watery path. The characters’ names are posted near their little woodland homes, and clues such as Br'er Rabbit’s knapsack allude to the fact that the story begins with his running away. 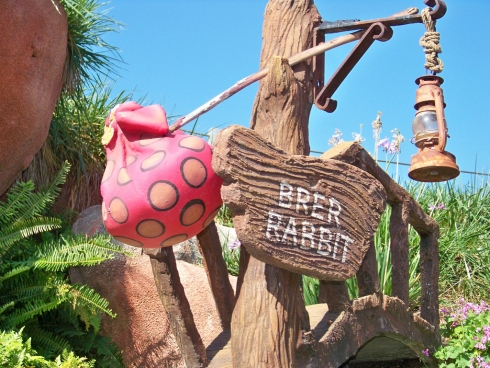 After a quick little drop the speed of the ride picks up and you enter the mountain where animatronic animals serenade you. The tune changes to "Everybody's Got a Laughing Place" and then to the ominous “Burrow's Lament” which mentions rabbit stew – yikes! Following a shadowy chase upward, you escape with the fantastic drop and head back home with another dose of charming music. 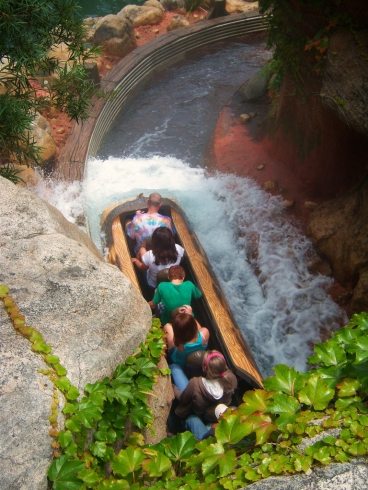 Your great escape (aka the drop)! Image © Loren Javier

*Splash Mountain was a saving grace for Bear Country. The America Sings attraction wasn’t actually attracting guests, but it did have Audio-Animatronics that could be upcycled and used for another attraction. Shifting focus to the $75 million log flume ride brought guests back to Bear Country in hordes!

Now, back to “Zip-A-Dee-Doo-Dah” … When I was a child, I knew this song from a Disney sing-a-long cassette tape that I listened to countless times. When my little brothers were kids they had a sing-a-long VHS tape that they watched over and over! While we listened to this iconic song on repeat throughout our childhoods, we never realized that it was from a Disney movie so controversial that it was has never received an official release on VHS or DVD in the US! 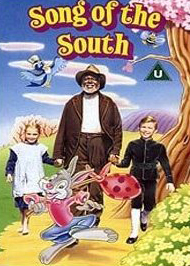 Disney was rightfully concerned about how the public would react to their 1946 Song of the South featuring a cast of African Americans who were in servitude to a Caucasian family set in the deep South. In all actuality, though, the movie was made after the American Civil War and these beloved characters were not slaves at all. There are a few clues that some may or may not pick up on which prove this to be true: The main character could come and go as he pleased, the field hands were sharecroppers who benefitted directly from the crops and the fashion was more modern which portrayed a new era.

I was able to track the movie down via YouTube. Granted, the movie has been spliced into several small parts, but I found each section and pieced it together. The story is actually quite sweet with a heartwarming character by the name of Uncle Remus who tells fabulous folk stories about Br'er Rabbit. Uncle Remus engages with all of the children regardless of race, and everyone is pleasant and accepting of each other. There is, however, no doubt that each race had distinct roles and the movie leaves a certain sense of unease as the viewer can’t help but be reminded of a time where people were once treated as a commodity.

Thankfully, the hush-hush nature of the film didn’t stop the wonderful music from reaching our ears and transforming into the ride that we know and love today. Disney Imagineers crafted an exciting log flume ride that rivals all of the other flume rides the world over.

*Check out this debaucherous fact about Splash Mountain!

opened in 1992 in Magic Kingdom, not Disneyland

Apologies for mistake, the article has been changed to 1989. Thanks and kind regards.