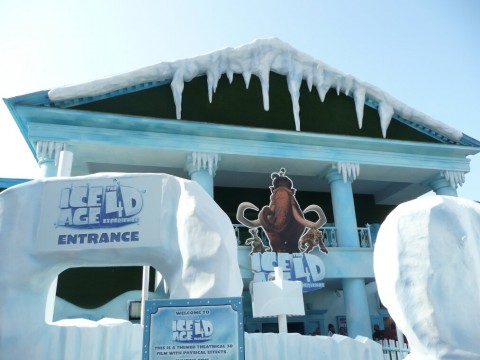 Alton Towers has debuted its new family attraction for the 2012 season, Ice Age Dawn of the Dinosaurs - The 4-D Experience. The animated movie series is already a huge success, with a fourth film due to be released later this year. But will Sid, Manny, Scrat and friends prove to be a hit at the UK's most popular theme park?

The 4-D movie is one of two new additions to Alton Towers in 2012, with the other being thrill ride Nemesis Sub-Terra. It is located in Cloud Cuckoo Land, and has replaced the Go!Go!Go! Show in the child-friendly area's theatre. It fills a noticeable gap in the park's line-up that it has been attempting to fill for some time, with plans to install a version of Shrek 4-D having fallen through in 2011.

As its name sugests, Ice Age Dawn of the Dinosaurs - The 4-D Experience is based on the third installment in the Ice Age series, which has been converted into the 4-D format by specialist SimEx-Iwerks. The attraction is likely to be cross-promoted in conjunction with Twentieth Century Fox, which will release Ice Age: Continental Drift in cinemas in July.

A new look for a very old building

Ice Age 4-D is a highly visible addition to Cloud Cuckoo Land, with the area's entrance sign having been updated to highlight the presence of the movie's characters. The Cloud Cuckoo Land Theatre, originally built in the 1700s to host touring magic shows, has also received a new, icy look to reflect the theme of the movies. 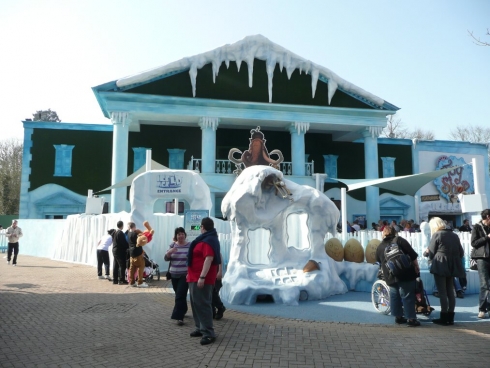 Guests queue in a line around the front of the building, which now boasts a number of video screens. These show clips of Scrat, the popular sabre-toothed squirrel who features in all of the Ice Age movies so far. Kids and adults alike are likely to enjoy Scrat's antics, which often outshine the "real" storyline in the films. 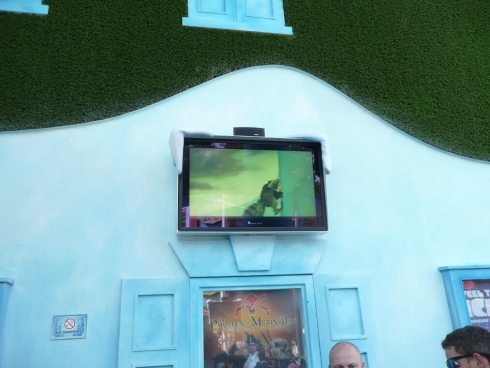 Due to the theatre's large capacity, the queue for Ice Age Dawn of the Dinosaurs - The 4-D Experience moves relatively quickly. Even on the attration's opening day, wait times were rarely longer than around 25 minutes. The Scrat clips, along with a photo opportunity in front of a green screen, help to make the time pass painlessly.

Before entering the theatre, guests are handed a pair of 3-D glasses. These are of the disposable paper variety familiar from other 4-D theme park attractions, rather than the sturdier glasses used to view 3-D films at cinemas. The Ice Age-themed specs make a nice free souvenir, and can also be exchanged for a 20% discount in the adjacent shop when spending £30 or more.

We have to admit, we were expecting Ice Age 4-D to be thrown together on the cheap, and our hopes were not high. We were pleasantly surprised by the outdoor theming, but our first impressions of the theatre's interior were not good. While there's a suitable amount of "ice" theming in evidence, the screen appears a little too small. Most worryingly, guests are seated on simple benches, rather than on the moving seats that we're accustomed to on world-class 4-D attractions. 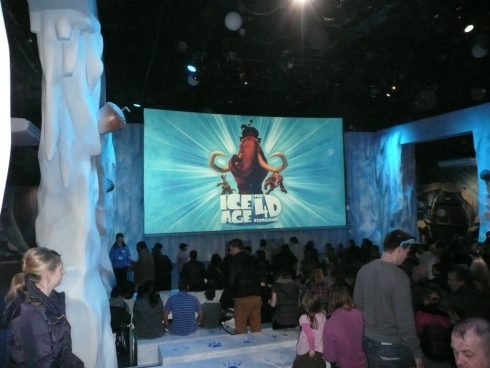 Guests are seated on basic benches to watch the movie.

On the plus side, the use of benches allows a large number of guests to be seated for each showing. While we'd like to be able to lean back in a chair, the movie isn't long enough for the benches to become too uncomfortable, and we've often found lower-quality 4-D seating (such as that found in Flamingo Land's 4-D theatre) to be more painful than fun.

Ice Age Dawn of the Dinosaurs - The 4-D Experience consists of re-purposed footage from the movie itself. This tells the story of Sid the sloth, Manny the Mammoth and Diego the sabre-toothed tiger, who discover a "lost world" populated by dinosaurs hidden away underneath their own freezing-cold habitat. A series of close-scrapes with prehistoric beasts follows, with a sub-plot centring on Sid's attempts to "adopt" several baby T-Rexes.

We've never been overly impressed by the 4-D attractions that directly re-use footage from movies, for two reasons. Firstly, we much prefer all-new stories that advance the plot, such as that seen in Shrek 4-D. Secondly, it's often hard to follow the plot if you haven't seen the original movie. Fortunately, the editors of Ice Age 4-D have done a good job of condensing the movie's plot, while retaining the humour that made it a hit with kids all over the world. 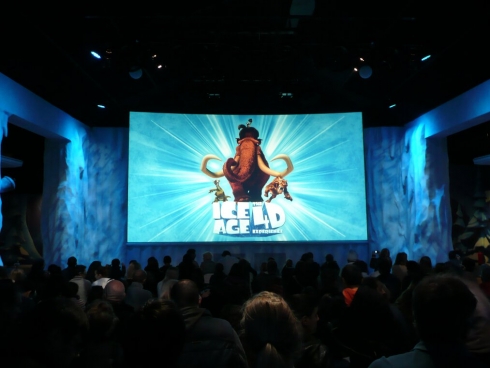 The on-screen action is augmented by a variety of special effects.

Most importantly, the experience of viewing the Dawn of the Dinosaurs footage on screen is greatly distinguished from that of simply re-watching it on DVD by the use of some really impressive effects. Most theme park-goers will have encountered vibrating seats or floors, leg-ticklers, bursts of air and wind effects before, and all are in evidence here. However, we've never seen "snow" before, or experienced a sudden rise or drop in temperature to accompany a scene. Even the water effects are mixed up a little, with bubbles rather than mist being released into the theatre at one point.

The overall effect is really quite impressive, and the screen on which the action is presented is crisp and clear, even if we'd still prefer it to be a little larger. Sitting reasonably far forward in the theatre is recommended, but you won't miss out too much if you sit near the back. 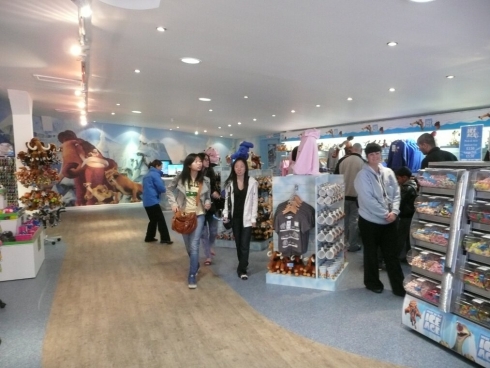 A wide variety of Ice Age merchandise is on offer in the shop.

Predictably, guests spill out of the theatre into a large, Ice Age-themed shop. Given the number of cute cuddly toys on offer, we'd wager that many parents will exit the store a few pounds poorer than when they went in. Some of the smaller toys are not as expensive as might be expected, though - try and navigate your children towards those. 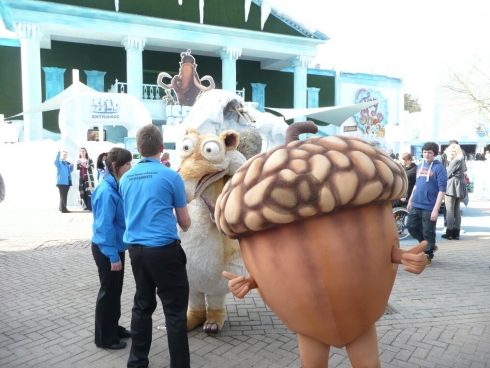 Yes, it's a walking acorn.

We've often wondered why Alton Towers doesn't feature any walkaround characters, particularly given the huge popularity of Skelvin and his friends during the Scarefest Halloween events. The park now has a ready-made group of well-known characters to use in this capacity, and Sid and Scrat make appearances in both Cloud Cuckoo Land and close to the park's entrance (along with a walking acorn, the significance of which you will understand if you've seen the movies).

We did not have high hopes for Ice Age Dawn of the Dinosaurs - The 4-D Experience, and judging by our recent poll, nor did many Alton Towers fans. We're delighted to have been proven wrong by Alton Towers and its partners in the production of the attraction, which offers solid entertainment for both kids and adults alike. Indeed, the average age of guests in the Cloud Cuckoo Land area appeared to have risen slightly due to the new addition. 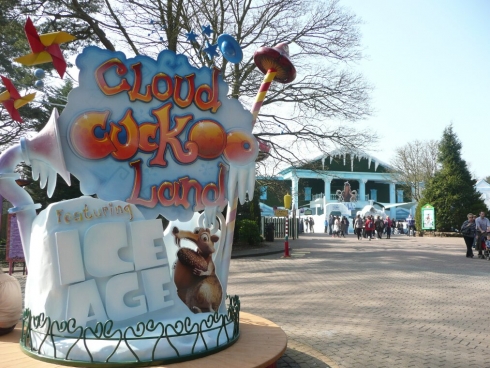 The film itself offers reasonably strong source material, but it's the effects that are the most impressive aspect of Ice Age 4-D. We'd love to see the same level of intentiveness applied to an all-new movie, but Alton Towers' new attraction is still vastly better than the 4-D shows at most other UK theme parks. 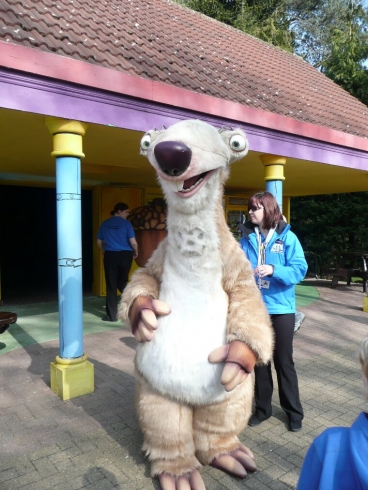 Sid is on hand to meet Alton Towers guests.

In an unexpected twist, we actually prefer Ice Age 4-D over Nemesis Sub-Terra, which promises so much but delivers so little. If you've never seen a reason to explore the Cloud Cuckoo Land area of Alton Towers, you've just found one - grab your 3-D specs, and head on in.