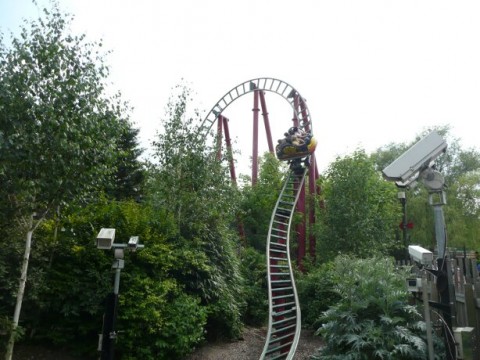 London is one of the world’s largest cities and is understandably a huge attraction for tourists. It should come as no surprise, therefore, that some of the very best theme parks in the UK are located nearby.

Although no parks actually reside within the actual city of London, (a fact that I feel should be rectified) all three parks I will mention are no more than a forty minute drive from Central London and easily accessible from the M25 motorway. With the Olympics fast approaching in July/August attendance will likely soar, and if you’re planning a trip to the capital these three parks are not to be missed.

Interestingly, all three parks are operated by Merlin Entertainments Group; as you will see there are many similarities between the parks, especially when it comes to dining options.

As its name suggests, LEGOLAND Windsor is themed solely to the wonderful plastic building bricks that have been so successful for over half a century. As a result, the park is very much aimed at younger children; I would suggest any child over the age of ten would be less than enthused by the rides on offer. However, that’s not to say they’re bad by any means, they just cater to a specific group.

LEGOLAND Windsor is home to some fantastic rides and attractions for the little ones; The Dragon roller coaster provides some thrills for braver kids, whilst the Dragon’s Apprentice offers an alternative for those not quite up for the challenge. Pirate Falls is a beautifully themed log flume with a pretty big splash and you’ll get a similar soaking on the Viking’s River Splash rapids ride. There’s also a great deal of interaction on offer; you can get your hands on your very own LEGO driving licence at the Driving School, and practice putting out burning buildings at the Fire Academy (a favourite with competitive dads).

As with all Merlin parks, LEGOLAND is home to many own-brand generic restaurants, don’t let this discourage you though, on the whole they’re reasonably good eateries, and it can come as a breath of fresh air not to be faced with the regular fast food chains. There’s pizza, burgers, fried chicken as well as more healthy pasta and salads available. On top of all of this LEGOLAND has recently completed its on-site hotel, and as a result the resort is definitely worthy of an overnight trip.

Whilst LEGOLAND is more of a step-sister, Chessington World of Adventures has been a sister park to Thorpe Park for many years; both operated under Tussauds for almost fifteen years before Merlin acquired the group. The proximity of the two parks (they are less than thirty minutes from one another) led the management to take a big decision in terms of target market, in order to distinguish them from one another and avoid one becoming more popular than the other. Chessington was given the role of the family park, meaning toning down some of the attractions, whilst Thorpe Park would become the thrill seekers’ park. (As it happened when LEGOLAND joined the chain, it fitted perfectly, catering to even younger guests than Chessington).

It may not have the monster coasters that Thorpe Park does, but Chessington still offers some thrilling rides that pack quite a punch. Dragon’s Fury is a fantastic spinning coaster by Maurer, and Vampire is a classic Arrow suspended coaster that hits speeds of 45 miles per hour whilst cruising over rooftops. The Huss Topspin Rameses’ Revenge is by far the most intense ride in the park and arguably worthy of being next door at Thorpe Park. Classic family rides such as Runaway Mine train and Rattlesnake, a Wild Mouse coaster, complete a solid line up.

The park has a particular emphasis on nature, and hosts a great selection of animals in the zoo and separate bird sanctuary in the Wild Area section of the park. This aspect means that even those who don’t like theme parks can relax whilst taking in the beautiful sights of the world’s most exotic creatures.

Just like LEGOLAND, Chessington is home to the Merlin brand restaurants such as “Pizza Pasta” and “Fried Chicken Co.” The names may be uninspired, but there’s a great selection on offer. On top of this, just like at LEGOLAND Windsor, there is a recently-constructed on-site hotel (themed to a safari) which is just minutes from the park.

It would not be strange to suggest that Thorpe Park is Merlin’s favourite child, considering the amount of money that has been invested in the park during the past decade. To get it up to the high-octane standard required, tens of millions of pounds have been spent installing five major roller coasters and many other flat rides since the Tussauds takeover in 1998. The park currently has no on-site hotel, but hopes to open one in the near future.

The highlights of the park really are world class; Stealth, an Intamin accelerator roller coaster that launches you to 80 miler pher hour in 1.9 seconds, Nemesis Inferno, a fantastically themed B&M inverted coaster, Colossus, the world’s first ten looping coaster, SAW – The Ride, the first horror film themed coaster, and new for 2012, The Swarm, a brand new B&M Wing Rider that blasts through a post-apocalyptic nightmare at over 55 miler per hour. The thrills don’t stop there; there are seven world class flat rides waiting to scare the pants off of you.

The only real problem with the park is that if you do have young children, they may not find a great deal to do; most of the rides have a 1.4 metre height restriction, and although there are some fun family rides, such as the log flume Loggers Leap, there isn’t really enough for a whole day. Nevertheless, that’s what the other parks are for, and Thorpe Park does its job brilliantly. The food outlets are slightly more interesting than at London's other two park - there is a great noodle bar (for some reason located in the Canadian area of the park) and the very best is the amazing Amity Kebab shop.

Whatever your age, or scare-tolerance level, there is something for you in London, so don’t hesitate in planning a trip to this fantastic city and its brilliant theme parks.

Good coverage! Thorpe Park's skyline is even more incredible with Saw and the Swarm!!

Thank you! Yes I know, it's impossible to get an up to date
picture; the skyline is changing so quickly!