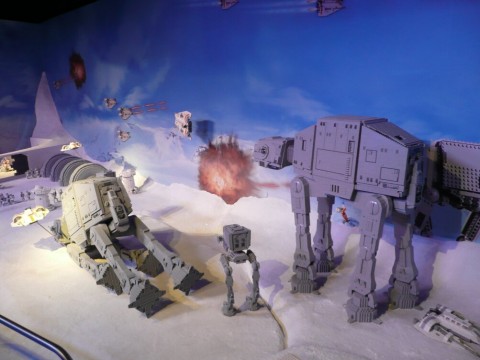 When George Lucas directed Star Wars: Episode IV - A New Hope back in 1977, he could surely never have dreamt that it would still be the subject of major new theme park attractions some 35 years later. Nevertheless, hot on the heels of Star Tours: The Adventures Continue at Disneyland and Disney's Hollywood Studios, here comes yet another Star Wars tie-in: the Star Wars Miniland Experience at LEGOLAND Windsor.

As its name suggests, the new addition is an extension to the existing Miniland, which recreates famous landmarks in miniature using millions of LEGO bricks. Unlike the similar Star Wars Miniland that opened at LEGOLAND California in 2011, LEGOLAND Windsor's version is located entirely indoors. It occupies the building that previously housed the Rocket Racers ride, which overlooks the rest of Miniland from its perch at the top of a hill.

Comprised of 1.5 million LEGO bricks formed into 2000 models at a 1:20 scale, Star Wars Miniland is divided into seven distinct scenes. This includes one for each of the six movies in the Star Wars series, and an additional one for the animated Star Wars: The Clone Wars spin-off.

Visitors to LEGOLAND Windsor will have no trouble locating the new attraction, which is situated close to the park's entrance in The Beginning area. Conveniently, it is located alongside a large shop that sells a huge range of LEGO Star Wars merchandise. 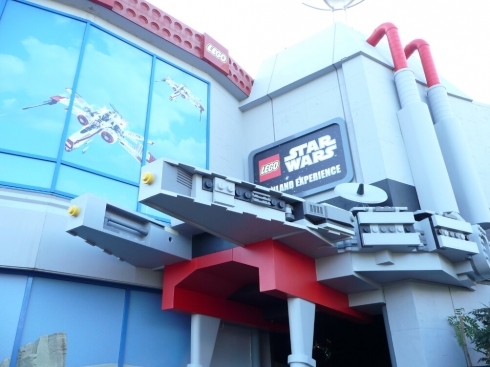 While LEGOLAND Windsor typically allows guests into the park up to 30 minutes before rides start, we found that Star Wars Miniland was already operating as soon as the gates opened. This meant that guests could quickly look around it before heading down to one of the park's other themed lands. We strongly recommend doing this, but if you don't want to feel rushed then the best time to explore the attraction is during the middle of the afternoon, when the crowds have spread out into the rest of the park.

Early in the day, the Star Wars Miniland Experience is a simple walk-in, with guests able to enter without the need for a queue. However, when the park hits its official opening time, visitors are made to wait in line outside the entrance. This is a good move by LEGOLAND Windsor, as it spreads out the crowds inside, enabling them to enjoy the scenes from an unobstructed viewpoint. The queue still moves quickly, as the walkthrough nature of the attraction means that there are no real bottlenecks.

A universe in miniature

Each of the Star Wars Miniland Experience's exhibits is set on a different planet in the Star Wars universe, and a number of well-known events in the movies' timeline are on show. Here's a run-down of the various different scenes: 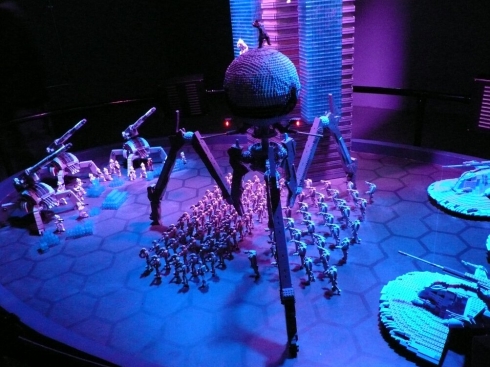 Christophsis (Star Wars: The Clone Wars) - the first scene on show depicts a battle between the Republic's Clone Army and Separatist forces. The Crystal City building is the largest model in Star Wars Miniland, and features some 70,000 LEGO pieces. 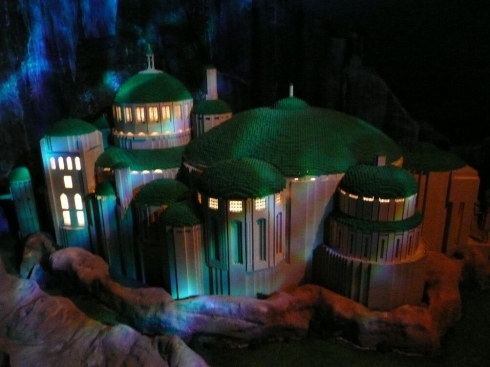 Naboo (Star Wars: Episode I - The Phantom Menace) - laid out in front of the large Royal Palace of Queen Amidala, another battle is raging. A number of well-known characters are on show, including Qui-Gon Jinn and Darth Maul, who are locked in a light-sabre battle. 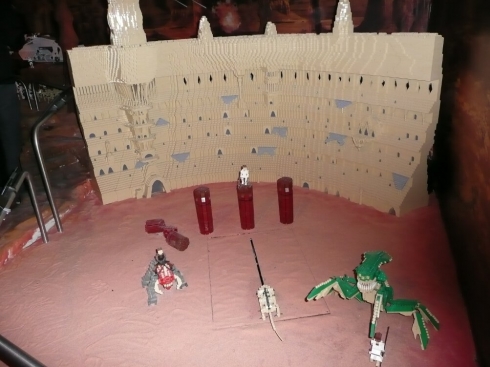 The Geonosis Arena is on a smaller scale than its surroundings.

Geonosis (Star Wars: Episode II - Attack of the Clones - two sub-scenes are featured in this area. The first shows Padmé Amidala, Obi-Wan Kenobi and Anakin Skywalker battling ferocious creatures in the Geonosis Arena (which, unlike the other models on show, is built to 1:180 scale for practical reasons). The other shows yet another war scene, the Battle of Geonosis. 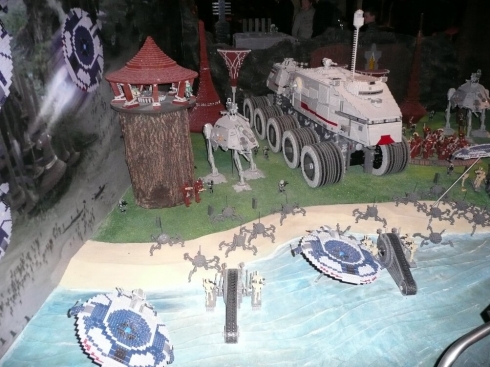 The Wookies face an amphibious invasion of Kashyyyk.

Kashyyyk and Mustafar (Star Wars: Episode III - Revenge of the Sith) - two planets are used to recreate the most recent Star Wars movie. The first shows an amphibious assault on the home of Chewbacca and the Wookies, Kashyyyk, while the second shows Obi-Wan Kenobi and Anakin Skywalker battling it out on the volcanic planet of Mustafar. 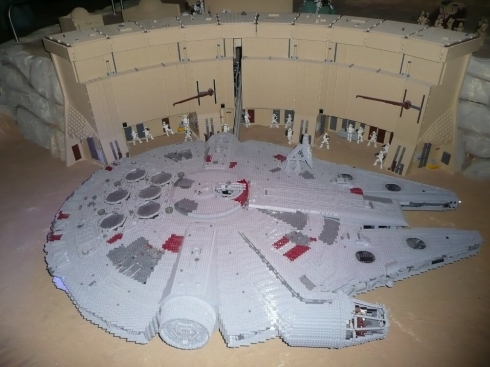 Tatooine (Star Wars: Episode I - A New Hope) - this area is dominated by a model of the legendary Millenium Falcon spacecraft, which narrowly "escapes" from the spaceport of Mos Eisley. Fans of the original Star Wars trilogy will instantly recognise the music that accompanies the scene, which is played by a band in the spaceport's Cantina. 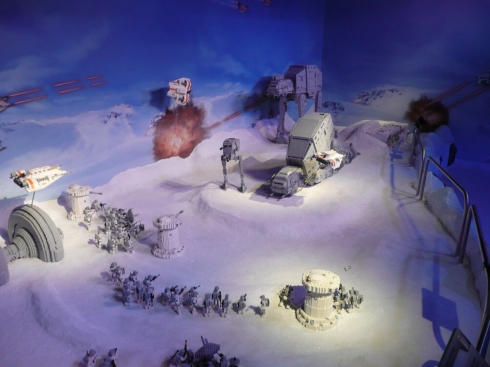 Large AT-AT models are on show in the Hoth scene.

Hoth (Star Wars: Episode II - The Empire Strikes Back) - set in a snow-covered wilderness, the penultimate scene is along the most visually distinct on show. It depicts the evil Empire's attack on the rebel's Echo Base, including Luke Skywalker's heroic attempts to down an enormous AT-AT vehicle with just a light-sabre. 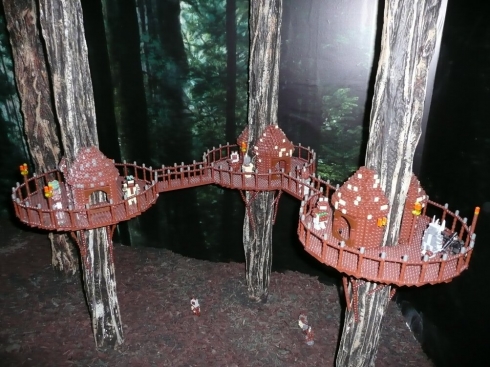 Watch out - the Ewoks are about.

Endor (Star Wars: Episode III - Return of the Jedi) - love 'em or hate 'em, the cuddly Ewoks are alive and well in Star Wars Miniland. Darth Vader is on the scene as a pitched battle begins between the rebels and the Empire.

The scenes in the Star Wars Miniland Experience are recreated in an impressive level of detail. On a number of occasions, we thought we had caught the model-makers "cheating" by using non-LEGO elements in the construction of spacecraft or buildings. On closer inspection, though, we always found that what we thought was a continuous surface was actually made up of thousands of tiny bricks. There is real artistry on show throughout the attraction, and you can almost see the love that the creators of the models have put into each and every one. 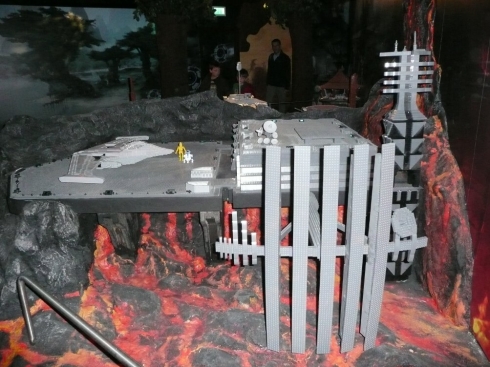 Thousands of hours of craftmanship are behind Star Wars Miniland's models.

Housing the attraction indoors was an inspired move by LEGOLAND Windsor, and not just because of the UK's rainy summers. The ability to control lighting and sound levels means that every scene becomes significantly more atmospheric than it would be if simply wedged in alongside the existing Miniland. The rooms are also decorated to blend in with the exhibits, and there's a clear sense of transition when moving from one scene to the next.

Our main complaint about Star Wars Miniland is the lack of movement on show. We've always loved the moving elements of Miniland, which serve to really bring it to life. While every scene in the Stars Wars Miniland Experience features some moving models, these are relatively thin on the ground. For example, we couldn't help wishing that the armies in the Naboo scene could march towards each other, in a similar fashion to the guards outside Miniland's Buckingham Palace. 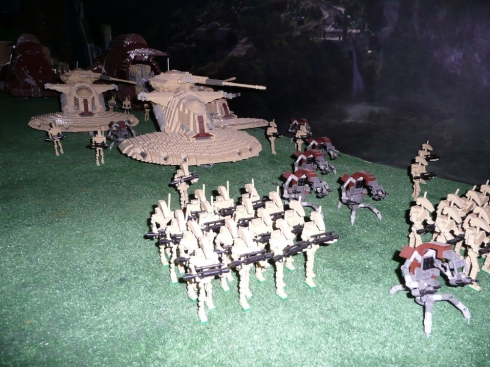 Many of Star Wars Miniland's characters are completely static.

In fairness, the designers of Star Wars Miniland may have been taking a "less is more approach". It's certainly true that the larger moving models, such as the Millenium Falcon in the Tatooine scene, capture guests' attention. Kids, though, may grow impatient while waiting for the buttons that trigger each scene to illuminate (enabling the moving elements to be started). Clearly, the gap is designed to avoid clashes between neighbouring scenes, but we found the waits to be a little long at times. 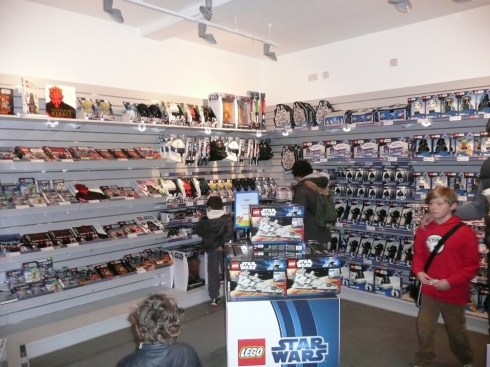 A lot of money is going to change hands in Star Wars Miniland's shop.

Parents will need to summon all the willpower they have in order to avoid making a purchase in the shop that guests are funneled into on exiting the Star Wars Miniland Experience. The dozens of LEGO Star Wars models on display, along with a huge variety of clothing and other items, will have kids begging mums and dads to part with the contents of their wallets. Heck, many parents won't be able to resist the urge to pick up a Yoda keyring or two themselves. 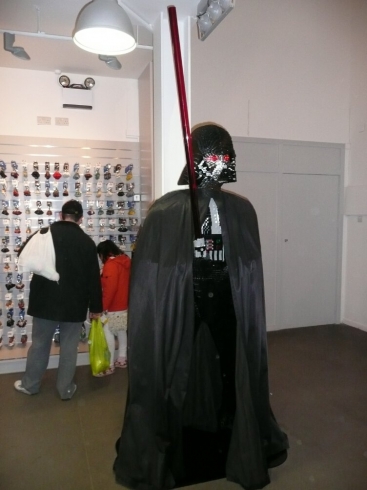 In his later years, Darth Vader was reduced to taking part-time retail jobs.

There is the slight possibility of distracting children with the chance to have a picture taken with one of the impressive full-scale LEGO replicas of famous Star Wars characters that are dotted around the shop. The most popular of these is Darth Vader, whose mask lends itself perfectly to the use of LEGO bricks.

It's impossible not to feel slightly cynical about the Star Wars Miniland Experience. It is, after all, effectively a giant shop window, with many of the models on show available to purchase in the attraction's shop. However, anyone who really feels strongly against this notion will probably not visit LEGOLAND Windsor in the first place, given that the same accusation could be made against the park itself. 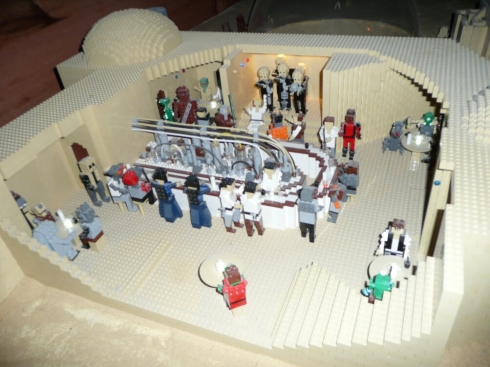 At times, Star Wars Miniland is like a giant game of "Where's Wally".

Fortunately, like the rest of LEGOLAND Windsor, Star Wars Miniland is a solidly entertaining experience in its own right. Parents will be impressed by the level of detail on show, and many will revel in the feelings of nostalgia that the Star Wars universe can still evoke. Kids, meanwhile, appear to be almost universally enthused by the chance to spot their favourite characters, vehicles and locations. 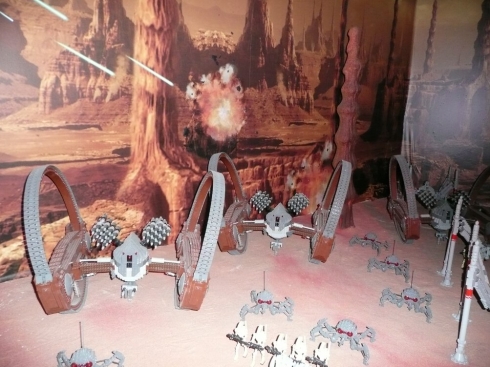 Chances are, your kids can name all of these models.

One thing that really struck us during our tour of Star Wars Miniland, and left us a little surprised, was the level of awareness that today's youth have of Star Wars, in all its forms. Clearly, this is not an ageing franchise that is on its last legs, but one that is just as relevant to modern kids as it is to their sci-fi-geek parents. LEGOLAND Windsor appears to be on to a winner with its newest addition, and we look forward to seeing it evolve in the coming years as new Star Wars stories continue to be created.