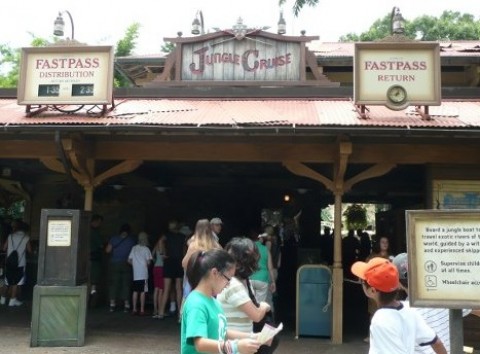 Disney is set to follow in the footsteps of its inferior rivals next year and introduce a paid-for version of its FASTPASS queue-jumping system. This is a move that I've campaigned against for a number of years, and I feel obliged to once again point out why this is a bad move for the company.

Rumors of the "XPass" system, which would enable guests to pre-book queue-jumping slots for the entirety of their vacation at Walt Disney World, have been flying around for some months. They were lent credence by statements earlier this year from Tom Staggs, chairman of Walt Disney Parks and Resorts, who revealed that company was working on a "version of FASTPASS for (visitors') entire Disney vacations". Most recently, Jim Hill Media claimed that the new system will be introduced next year and will be offered only to guests staying at Walt Disney World's Deluxe Resorts.

To be fair to Disney, it doesn't appear to be following in Universal's footsteps and offering blanket queue-jumping privileges (without any time window restrictions) to all of its high-paying guests. Instead, it will blend XPass in with the existing FASTPASS system, which enables guests to return to an attraction during a specified time window and skip the regular line. The new system would work alongside this, with the key difference being that XPass users could pre-book their time windows months in advance (at a price).

Nevertheless, the introduction of XPass would mark the latest in a series of moves towards a two-tier system by Disney - and here are 5 reasons why it should rethink its plans.

1. It will create an "underclass" of guests

It's impossible not to feel a little irked when you're waiting in a lengthy standby line at a Disney park, and a rush of FASTPASS-holders race past you and skip straight to the front of the line. However, at the back of your mind you always know that you too could have taken the FASTPASS option, and probably opted to use it for a different attraction instead.

With XPass, that's suddenly no longer the case. As with Universal's Express Pass, other guests are suddenly skipping by you simply by virtue of the fact that they've paid more money than you. Ordinary families that have scraped together enough cash for an already-expensive Walt Disney World trip will be made to feel like "peasants", even if it's difficult to tell an XPass user from an ordinary FASTPASS holder.

2. It will be seen as profiteering

Disney will try and sell XPass as the next level of convenience - a way to pre-plan your entire vacation so that you can relax when you get there. No more dealing with hours and hours of standing in line - just follow your itinerary and you'll waltz onto all of your favorite rides.

Except, um, those lengthy lines are a direct result of the capacity limitations of Disney's rides. I'm not suggesting that any theme park can realistically eliminate those lines completely (although many could do a better job), but charging guests extra for the privilege of avoiding them leaves a sour taste in the mouth. This is not the case for FASTPASS, which has the opposite effect of making guests feel grateful to Disney for attempting to limit their time spent waiting in line.

3. It will hurt the existing FASTPASS system

Inevitably, to accommodate the XPass system, Disney will have reduce the number of standard FASTPASSes that it distributes at each attraction. I haven't done the maths yet on what impact this will have (although I intend to), but given that XPass presumably won't have the same "1 pass at a time" restrictions as FASTPASS, it will inevitably go down significantly.

Again, this reduces the quality of experience for regular Disney guests. They'll be spending more time waiting in line - and resenting Disney for having raised the financial bar for those who don't want to burn in the Florida sun for hours on end.

OK, so I'm not the most spontaneous Disney guest. I tend to follow one of Len Testa's brilliant touring plans in order to minimize my time spent waiting in line. But I always have the option of diverting from the plan on a whim, and quite often do (particularly if it's the first time I've visited a park, or there's a new ride on offer).

For anyone who has pre-booked all of their ride time-slots, there's going to be a real sense of obligation to stick with their original plan (particularly as they'll have paid dearly for it). This might suit some guests - but for others, some of the magic of exploration may be lost.

5. It's against the "Disney philosophy"

This is a less tangible argument than the other four, all of which directly impact on the guest experience at Disney parks. It could be even more significant, though, if it damages Disney's brand - arguably, the company's most valuable asset of all.

Walt Disney's original philosophy for Disneyland was that guests should leave the park with money left in their pockets, creating long-term brand loyalty. That has long since gone out of the window - but the company has managed to avoid some of the more obvious money-grabbing schemes that its rivals have adopted. XPass is straight from the book of Universal or Six Flags, and in my eyes it makes the company just that little bit less special.

Am I alone in thinking that FASTPASS is one of Disney's greatest differentiators, in a world where almost every other theme park chain has introduced a paid-for queue-jumping scheme? Would you feel like a second-class citizen if you couldn't afford to use XPass? Let me know through the comments section below!

Dead On! The magical experience of Disney is slowly disappating with all of the bean counters. It seems the focus is to make money and only money at the parks recently. A majority of the Cast Members anymore do not have that so called "Pixie Dust" in making your visit enjoyable. I have heard them yell and mistreat guests frequently, though every now and then you do receive an extraordinary effort. I agree with the Class difference, it seems that is the way the whole country is going. We purposely have not extended our annual passes for the very reason Disney seems to be greedy and has adopted policy's that have not been true to the original format. I do not believe the xPasses are a good idea and agree that it will cause damage to Disney's reputation. However; odds are the Disney exec's will be laughing at us all the way to the bank!

How Do i know what I want to do months in advance....I adjust what I do cause of weather,energy,etc. I certainly don't want to pay so I can xpass on the safari in animal kingdom only to have it be pouring rain! Charging for this privilege is a no no...
.......Walt must be turning in his grave! As a DVC member I go to Disney 2-3 times a year, love fast pass, why couldn't they just improve that system...they will not get a dollar from me for an xpass. This is another step down for Disney ... that stupid dining plan is insane...you pay for food and if you don't eat everything you are either giving Disney free money or you stuff yourself cause you don't want to waste money....and that magical express..not! Took it once waited an hour for the bus to leave , had to stop at 3 hotels before my stop....2 hours to get to my hotel...hell I take a cab now and I'm in the park while all the other fools are taking their "magical" bus ride....so I'll continue to do Disney my way and have fun without disneys double talk...

Actually it is an awesome idea. It will force Florida residents to not buy passes and lower park attendance from those rats of human beings from Florida.

I mean, I'm from florida and it is unlikely I will go but every 3-5 years from 3-5 times a year once they impliment a system which hurts my vacation.

After reading your article I agree with you 100% I have been a long time visitor of Disney, I have been going there since it opened. Been there well over 100 times and I have seen over the last several years the parks getting way over crowded and I hear a lot of guest complaints about it, Now if they start offering the XPass and it is a paid for pass I can see even more guests complaining and more problems with guests. I have seen guests argue with each other almost to the point of fighting over lines and who cut in front and such and the XPass will make things worse. I think Disney needs to look at ways of reverting back to Walt’s vision of treating all guests equal. They keep coming out with more vacation clubs and such and raising the prices so average income families cannot afford to go, or at least cut their trips down to once every several years. I went every year till I moved to Florida and then went a lot and my children have gone a lot because we are pass holders and I live close to Disney but if I had to get a resort and pay the price for food I just couldn't do it. Disney needs to work on keeping their prices down and build another park instead of trying to figure out how to cram more people into their overly crowed parks. XPass is a bad idea and I think Disney needs to reconsider it.

Noooo! This is an horrible idea!

My family just spent an insane amount of money on a family trip....we had gotten stuck on a lot of lines as it is bc there were just way too many fast passes given out with Disney enforcing the time slot rule.

Now to add to that, Disney will either take away the amount of free fastpasses or add to wait times? Come on. If that would be the case....I would have to figure either going to the parks during a really off season time or just go somewere else.