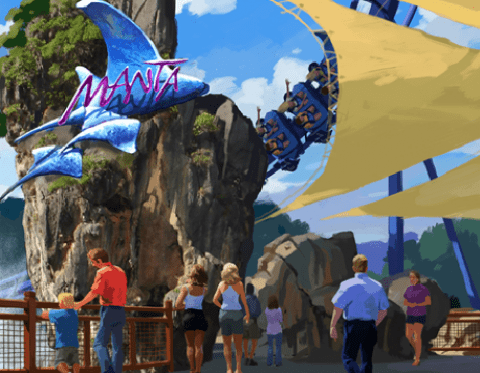 SeaWorld has always found a way to introduce innovative and awe-inspiring connections between humans and the sea. From state-of-the-art aquariums to adventurous, intelligent dark rides, and unbelievable, unforgettable encounters, the chain has attempted to bring the denizens of two worlds closer together through a whimsical combination of technology and mythology.

What’s the best way to explore the frigid habitats and inhabitants of the arctic? Why, to take a hair-raising polar helicopter ride via Wild Arctic! How can you better understand societies dependence on the sea than by hands-on encounters with the local population? And no one has ever so vibrantly told of the myths and mystery of the ocean than SeaWorld, with Journey to Atlantis, Kraken, and countless other incredible thrill rides.

But it takes a really special attraction to wrap it all together with a bow on top – to combine education, mystery, thrill, and entertainment in one exhilarating package. SeaWorld Orlando seemed to have found that perfect package in 2009’s Manta, a B&M flying coaster that interacts with water elements and replicates the smooth, gliding underwater flight of the manta ray while also letting guests pass through a massive grotto filled with aquariums, waterfalls, caverns, and facts about the graceful species.

Manta was a runaway (or should we say, flyaway) success in Orlando, and come 2012, we can expect that success to be duplicated at SeaWorld San Diego.

A Different Kind of Ray 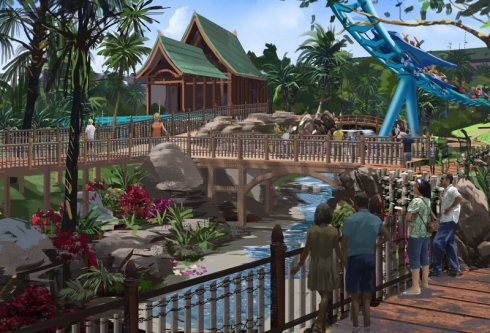 With lush vegetation and new landscaping, Manta will also reinvigorate the Forbidden Reef area of the park with new life. Image © SeaWorld Parks.

However, just because you can expect to be thrilled on the wings of a graceful ray after a trip through a world-class interactive aquarium, it doesn’t mean that SeaWorld San Diego is copying Orlando’s flying coaster. Quite the opposite, this Manta coaster will offer a completely different experience – one that will be thrilling, but also family-friendly (where the 140 foot, four inversion Orlando attraction was not).

When Manta opens at SeaWorld San Diego, it will feature a vastly different design. It will soar down a tallest drop of 54 feet and travel “only” 43 miles per hour, but don’t let the simple statistics fool you. This Manta is a more traditional, sitting coaster made by German manufacturer Mack Rides (most widely known for their dozens of Wild Mouse coasters, Journey to Atlantis at the three SeaWorld parks and similar water coasters, and Blue fire, among the coasters at the park it owns and operates, Europa Park). It’s also a launch coaster, using LSMs to accelerate the ray-shaped train to its maximum speed. 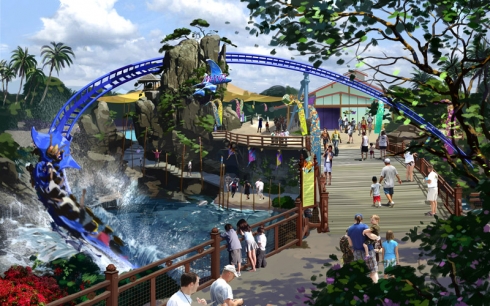 San Diego's Manta will have only a few commonalities with its sister ride in Orlando, but that doesn't mean it won't offer an incredible experience. Image © SeaWorld Parks.

Manta's circuit will contain no inversions, instead offering a twisted, turning layout that the whole family will enjoy. Manta’s real appeal, though, will be in its sense of immersion. Its entrance will be the park’s re-themed Forbidden Reef, now filled with rays skating and gliding across beautifully decorated exhibits. The ride itself will also be embedded into the terrain, passing through caves, gliding through tree canopies, and interacting with bodies of water like its older, Floridian sister.

The most innovative feature will certainly be the launch tunnel, surrounded by screens that will enable guests to zoom alongside projections of giant, graceful rays before they blast skyward and into an overbanked turn. This projection tunnel, SeaWorld promises, will be the first of its kind in the world, and will truly connect the interactive, aquarium-style queue to the physical ride experience itself, allowing guests to observe the rays, then swim “with” them before becoming one themselves. An official computer-generated point-of-view video (embedded above) shows what guests can expect from the ride, but does not account for landscaping, tunnels, effects, or water interactions. 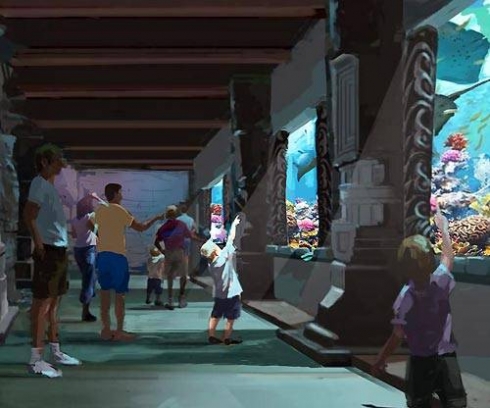 The ride's queue will wind through a new reef exhibit featuring bat rays and hundreds of fish, as guests prepare to experience the gliding underwater flight of the ray. Image © SeaWorld Parks.

Manta will contain leaping turns, swerving transitions, and airtime hills sure to leave families smiling with glee. It isn’t especially long or intense, and it’s not meant to be. Like SeaWorld Parks’ forthcoming / recent additions of Verbolten and Cheetah Hunt, Manta has been a family ride from the get-go, meant to be enjoyable and fun, not pulse-pounding and scary.

The park, located literally less than a half-mile inland from the Pacific Ocean on Mission Bay, has long been subject to the California Coastal Commission’s 30-foot height limit. That’s the reason that the park has never followed in the footsteps of its Floridian and Texan sister parks in adding skyline-dominating thrill rides, and indeed, the only way the park is getting past it this time is by having the ride dive 23 feet underground (the hill will only stand 30 feet above ground, as permitted).

We think that Manta is a great addition to a SeaWorld park that otherwise had fallen behind. With festive coloring, new rockwork, bubbling pools of water, and lush vegetation, Manta will be an visually striking attraction, and one that uses the land and sea to its advantage. While it may not be the most immediately thrilling roller coaster, it is designed to be captivating and immersive in a way even Disney might be jealous of. After so many years without a true thrill ride, SeaWorld San Diego probably isn’t expecting much of a thrill-seeking clientele anyway, so Manta will certainly prove popular with the park’s established fans and vacationers.

Manta is not poised to alter the thrill ride landscape, but it's likely to be a solid, popular, and much-needed addition at SeaWorld San Diego in summer 2012.