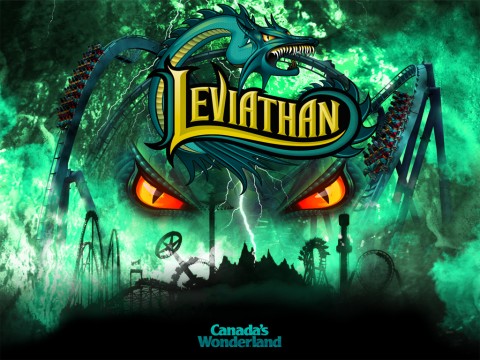 The tides are rising at Canada’s Wonderland in Vaughan, Ontario, and so is a massive steel creature the likes of which have truly not been seen before.

In 2008, Canada’s Wonderland unleashed an enormous, towering creature on the unsuspecting citizens of Ontario. B&M’s 200-foot Behemoth roller coaster was not unlike its namesake creature of myth – a gargantuan, skyline-altering foray into parabolic hills, speed helices, and enough airtime to lift even the most cemented of stomachs. Behemoth was the first coaster in North America to employ B&M’s V-designed trains, with a staggered second row that provides panoramic views for all riders.

And for fans of Canada’s Wonderland, it simply couldn’t have gotten any better.

But mythology also tells of Behemoth’s sister. A beast not of land, but of water. It was said that the dominion of the sea was ruled by a serpentine creature, and according to the book of Job in the Hebrew Bible:

25 When he rises up, the mighty are terrified; they retreat before his thrashing. 26 The sword that reaches him has no effect, nor does the spear or the dart or the javelin. 27 Iron he treats like straw and bronze like rotten wood. 28 Arrows do not make him flee, slingstones are like chaff to him. 29 A club seems to him but a piece of straw, he laughs at the rattling of the lance. 30 His undersides are jagged potsherds, leaving a trail in the mud like a threshing-sledge. 31 He makes the depths churn like a boiling cauldron and stirs up the sea like a pot of ointment. 32 Behind him he leaves a glistening wake; one would think the deep had white hair. 33 Nothing on earth is his equal— a creature without fear.

And come 2012, he will rise at Canada’s Wonderland. 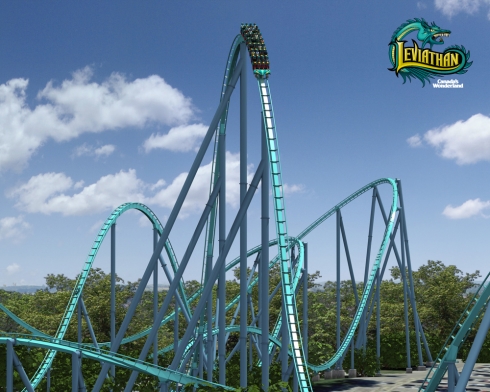 The snaking layout of Leviathan will feature hills, turns, and twists after a 300 foot plunge. Image © 2011 Cedar Fair

In recent years, Cedar Fair (the owners of Canada’s Wonderland, Cedar Point, Kings Island, Knott’s Berry Farm, and a half-dozen other parks scattered around North America) has had an undeniable penchant for two things: NASCAR, and serpents. Of the latter, they operate such rides as Kings Island’s Diamondback, Carowinds’ Carolina Cobra, Kings Dominion’s Anaconda, Worlds of Fun’s Mamba, and (on the mythological side), Dorney Park’s Hydra and Cedar Point’s Iron Dragon.

But all would certainly bow down to the king: Leviathan stands among the tallest rides Cedar Fair has ever developed. It will be the tallest, fastest roller coaster in Canada (snatching those records from its older sister, Behemoth), and stand taller than Cedar Fair’s latest giga-coaster, Intimidator 305 at Kings Dominion in Virginia, making it one of the tallest gravity-driven roller coasters in existence. 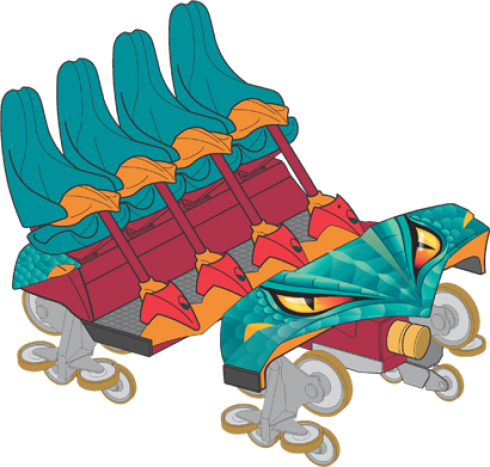 Leviathan's trains revert to B&M's classic, four-person seating with a comfortable, ergonomic shape and a single clamshell restraint for the most freedom. The zero car will hold Leviathan's glare. Image © 2011 Cedar Fair

Even among similar rides like Intimidator 305 and Millennium Force, Leviathan will provide an experience its cousins cannot match. It will be B&M’s first (and almost certainly not last) stretch into the world of giga-coasters. B&M is renowned for their incredibly reliable, smooth, and comfortable roller coasters. With an origin in “plain, old, traditional” fare, they’ve since branched off into more specialized pursuits, trying their hand at flying coasters, one launched coaster, and dueling chasing coasters. Along the way, they practically invented the inverted and stand-up coasters we see today, and made their hyper-coasters a must-have for any large thrill park.

But never before has B&M surpassed the 300-foot barrier. So even with rides like Intimidator 305, Millennium Force, and Steel Dragon, we simply don’t know what it’s like to ascend over 300 feet and travel in excess of 90 mph in the comfort of B&M’s ergonomic, freedom-flyer style trains along their effortlessly smooth track and soaring airtime hills.

Indeed, Leviathan will do what no other giga-coaster has done – it will see what happens when the speed and force of that height is combined with the leaping, weightless, twisting layout that they’ve only before used on hyper-coasters. 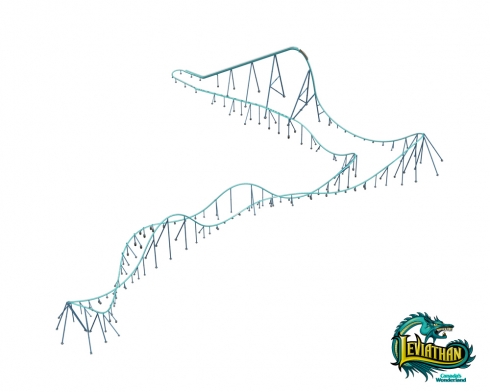 Sometimes when coasters are announced, they’re met with opposition or lackluster first-impression (think Intimidator’s ground-hugging layout and Maverick’s short stature, both of which ended up being massive hits despite initial criticism). Of course, fans of Canada’s Wonderland aren’t wishing that Leviathan wasn’t coming their way. Instead, they’re asking why. The ride’s announcement hasn’t earned as much revulsion or opposition as those two classic cases above, but it has elicited a sense of confusion from enthusiasts, who lift their voices in a massive, “huh?”

After all, Leviathan, in many ways, looks like nothing more than a taller, faster Behemoth. And it’s true that, come 2012, Wonderland will have two B&M coasters with similar layouts, the same basic style of train, and related themed sitting across the park from each other. We don't necessarily buy that. 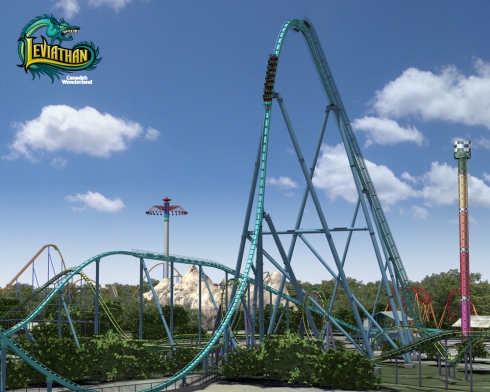 Leviathan will be the tallest, fastest roller coaster in Canada, and in the top ten tallest and fastest in the world when it opens at Canada's Wonderland in 2012. Image © 2011 Cedar Fair

At first, it may seem that Leviathan would be more appropriate at a park without a B&M airtime machine so newly stationed. But in our estimation, Leviathan will be worlds apart from Behemoth. Enthusiasts will undoubtedly notice the familiar & comfortable trains, the single clamshell restraint, and the giddy, weightless freedom that B&M’s out-and-back layouts elicit. But that aside, this ride will be faster and that means that the quick, nimble, low transitions popularized by Intimidator 305 and Maverick that are built right in will be experienced differently than anything Behemoth has to offer.

The coaster also took all of Behemoth’s huge, parabolic airtime hills and squished them down into elongated jumps and overbanked turns that will provide a unique sensation. And while the layout of Leviathan might not initially provoke squeals and gasps, it will certainly be a real thrill taking that first overbanked turn at 90 miles per hour.

Continuing in their ever-reliable style, B&M has also elected to install a traditional chain-lift  instead of the elevator-lift system on Millennium and Intimidator 305. As such, the ride to the summit will be long. Consequently, the ride does not have a mid-course break to slow the train. However, two sets of trim brakes are set to be included. Intimidator 305 also had numerous magnetic breaks throughout, earning it the not-so-loving nickname Intrimidator long before the 300-foot hill was adorned with brakes of its own, slowing the ride’s maximum speed to a cool 76 miles per hour for a time.

So, despite initial questioning, we think Leviathan will be an incredible ride, and a testament to the powers of B&M. Once visitors get their first rides, we think than any comparisons to Behemoth will be positive, and that both rides will continue to fill a very smart niche in the park’s coaster line-up.

I've been watching the videos and keeping up on the Leviathan website since last August when it was announced. Wonderland is my home park so I've been extremely excited about it getting the world's first B & M 300+ foot coaster! I was initially disappointed though with the length and layout...however my worries were put to rest when I rode if for the first time yesterday.

Everything about this ride is major league!! The forces on the first drop were insane! The tunnel added a lot in the 'head chopping' column. The speed coming out of the first over banked turn was unreal, which carried over in to the speed turn and in to the 2nd hill. Out of all the rides I've ever ridden in North America, this second hill by far had the most airtime I've ever experienced.

What took me by surprise was the sheer speed of the ride. The videos don't do it any justice. Riding in the front row a few times, the wind was enormous and overwhelming. As for the length of the ride (my other concern), I'm extremely happy to say that it was absolutely perfect! Not too short where you were wanting more, nor too long to the point of exhaustion. The long trim break is hardly noticeable either as it really doesn't slow you down until after the flat break section.

Wonderland should be very proud of this world-class ride. By far, the best circuit coaster in the world, IMO.