Halloween Time at the Disneyland Resort 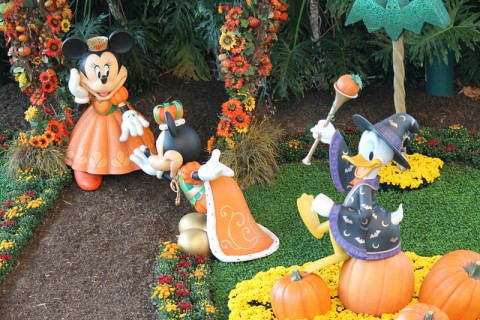 Halloween is a most exciting time at the Disneyland Resort! You can pay extra for specialty experiences to enhance the season, or you may simply enjoy the inclusive festive sights and sounds around the resort this October. 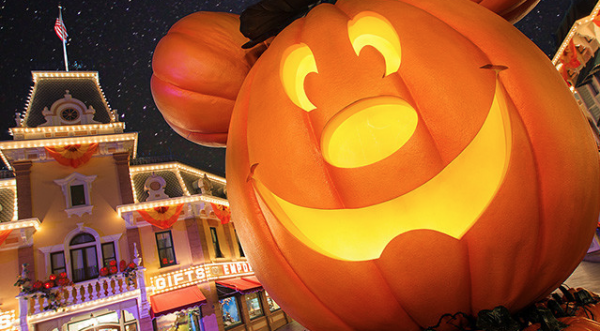 Main Street Pumpkin Festival – Each year, Disneyland decks Main Street out in 300 uniquely carved pumpkins. These festive gourds are showcased in and around the storefronts for all to see. Guests can have professional park photos taken of themselves with a seasonally costumed Mickey and Minnie duo in front of the gigantic Mickey shaped jack-o-lantern display, or can opt to take their own photos as the crowds die down.

*Keep an eye out for carved character pumpkins surrounding the Walt and Mickey statue at the end of Main Street!

The Halloween Tree – Ray Bradbury, famous author of Fahrenheit 451 and friend of Walt Disney himself, also penned The Halloween Tree back in 1972. Disneyland paid tribute to this wonderful fantasy book back in 2007 by dedicating the oak tree in front of the Golden Horseshoe to Bradbury’s creation. Because of the recent renovations to Frontierland’s Golden Horseshoe, the tree was set up with its strings of jack-o-lanterns a bit late this year. Nevertheless, the tree is up now and will continue to delight guests throughout the rest of October.

Dia de los Muertos – Disneyland is honoring the “Day of the Dead” by setting up authentic traditional décor for guests to enjoy at Rancho Zocalo Park in from of Rancho Zocalo Restaurante in Frontierland. Dia de los Muertos is less about mythical spooks and more about loved ones who have passed – a family-centric holiday – which makes its addition to Disney’s Halloween Time most welcome.

*Even though Halloween Time at the park ends on October 31st, the Dia de los Muertos display will remain intact until after November 2nd.

** If you happen to have tickets to Mickey’s Halloween Party, take a few minutes to stop by Rancho del Zocalo Restaurante for Piratepalooza! 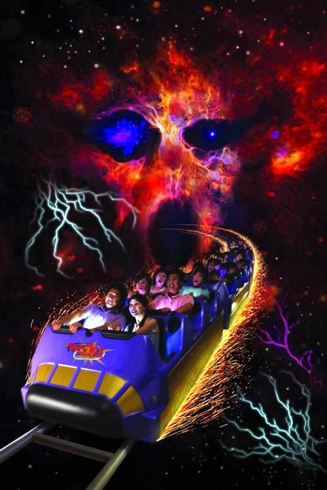 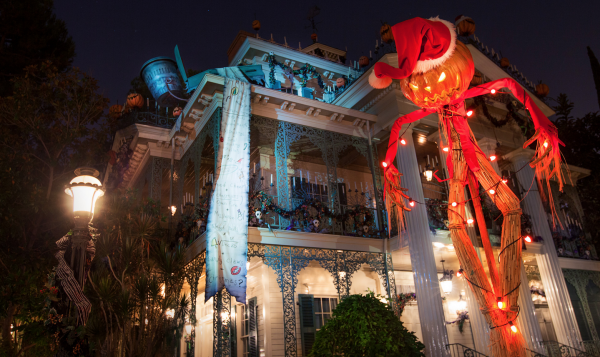 Now, what would you do with an animated 6 foot tall, 500 pound gingerbread house? Why, put it in the Haunted Mansion’s Grand Hall, of course! Every year boasts a new design brought to you after hours of sweet labor by cast members from the most unexpected teams (Operations, Engineering, Creative Development and Food and Beverage). This year’s gingerbread house theme happens to be “Jack Skellington Meets Santa Claus” and includes a Hidden Mickey!

*I have a tradition where I choose 1 of the 100 jack-o-lanterns from the décor outside to replicate on my own pumpkin at home each year! I’m certainly not as skilled as the pros who designed those pumpkins for the ride, but it’s still fun to try my hand at the intricate carvings. Are you up for the challenge?!

The Twilight Zone Tower of Terror – This ride is eerie on its own, but come Halloween Time the fear factor raises. Look for Halloween-inspired decorations and sound effects in the lobby and right outside the ride. The adjoining store even has a festive storefront! 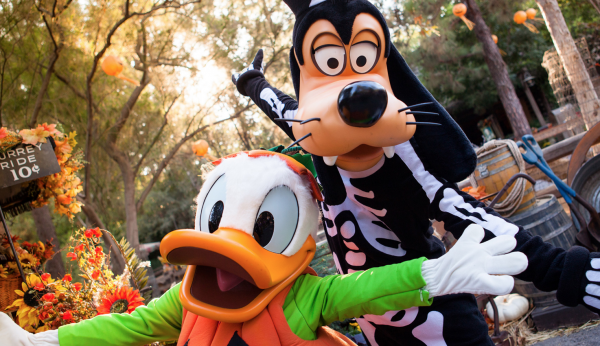 Mickey's Halloween Party – This is a scheduled event where families can dress up and trick-or-treat throughout the park at designated treat stations. The party takes place on designated days during Halloween Time and requires the purchase of specialty party tickets. Prices range from $49 to $64, depending on which date you choose to attend and whether or not you buy tickets in advance.

The Halloween Screams fireworks spectacular is an exclusive show for party guests and is a personal favorite of mine! You will also be able to take part in the special Villain Meet & Greet where you’ll have an opportunity to snap photos of your kiddos with diabolical geniuses! Enjoy Mickey's Costume Party Cavalcade which parades down Main Street with large mobile pumpkins and festive dancers, and let the kids spend some of their energy at Buzz Lightyear's Intergalactic Space Jam dance party at Tomorrowland Terrace.

*Be on the lookout for a surprise cameo by Miss Piggy in Mickey's Costume Party Cavalcade!

**Parking is complimentary for most party ticket holders (depending on the size of the vehicle).

Disney's Happiest Haunts Tour – One of the most magical things you can do at this time of year is to partake in the Happiest Haunts Tour. It begins at Disney’s California Adventure at The Twilight Zone Tower of Terror and leads you back to Disneyland. The tour includes a cool glow-in-the-dark lanyard with an antique-inspired key and grants your group front of the line privileges for the Halloween-esque rides. Not only that, but you get to hear the history of Halloween and a collection of “fractured fairytales” that may leave you scratching your head in confusion. Is the Evil Queen from Snow White really the victim of the story?!

*The ticket price also covers a specialty Disney pin which will be mailed to you at a slightly later date.

There is plenty to keep little ghouls and goblins busy this season, especially when it comes to choosing an array of spookily tasty treats. Let’s meet back here later this week for a rundown of sugary Halloween goodness!