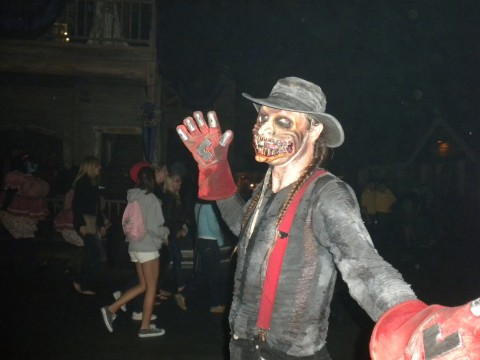 Knott’s Scary Farm’s annual Haunt is the event of the year for California theme park enthusiasts. I’ve been attending for the last 17 years, and 2011 brings us the best Haunt yet! Before we go any further, allow me to preface this review by divulging that I’m a total scaredy-cat. I screamed, jumped and even yelled directly at monsters when I hit my breaking point. Also note: clowns are not my friend.

I beg of you, please try to go early so as to beat traffic and find a decent parking spot! I thought that I left at a reasonable time as far as distance goes, but didn’t account for Friday afternoon/evening traffic. There were stretches on the freeway that came to a slow crawl, and to top that off I had to completely stop for a while due to an accident. You never know what variables will be thrown your way when travelling, so I advise erring on the side of caution by heading out at least 30 minutes ahead of schedule.

Because of the traffic delay, the parking lot was quite full when I arrived. I saw the line of cars spilling out into the street and hoped that I wouldn’t have to walk too far. I was excited and wanted to get into the park as soon as humanly possible! I noticed that the parking lot looked a little smaller than I had remembered and, as it turned out, I was in the wrong parking lot. Rather than the $15 parking lot, I had entered into the $20 “preferred” lot. It actually worked out perfectly because I was able to park closer than I ever have before and save some time.

* You will appreciate the preferred parking even more at the end of the night when your feet are sore and you have to walk back to your car.

If you’ve never been to Knott’s Scary Farm, you should know that they take their security very seriously. I, for one, appreciate this fact and am always happy to go through the metal detectors and empty my pockets when asked. 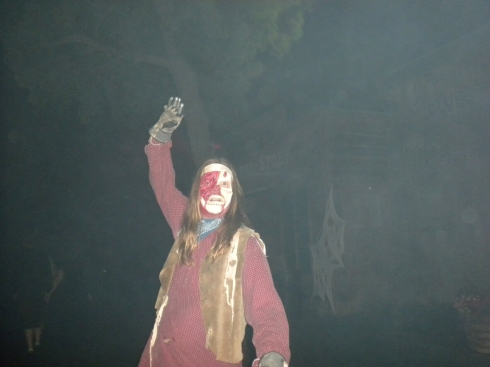 The staff are always welcoming at Knott's Scary Farm.

The park seemed better equipped this year with a larger staff to get everyone through in a timely manner. In past years, I remember standing in line for almost an hour. This year, I may have been standing there for a mere 5 minutes. The lines will increase as Halloween approaches, of course, but I can already see a great difference in the park’s organization.

* Grab a map! Fog machines, scary monsters, random mazes and crowds will leave you completely disoriented as you try to make your way through the park.

I highly recommend paying the extra $24 for the Pre-Scare Boo-fet Beastly Feast! There was one con for me about the buffet: I’m terrified of clowns and I had to walk through the CarnEvil scare zone and all of its deranged clowns to get to the buffet at the Boardwalk Ballroom (where they later show Zamora’s “Side Show of the Bizarre”). Other than that, it was an incredible experience. 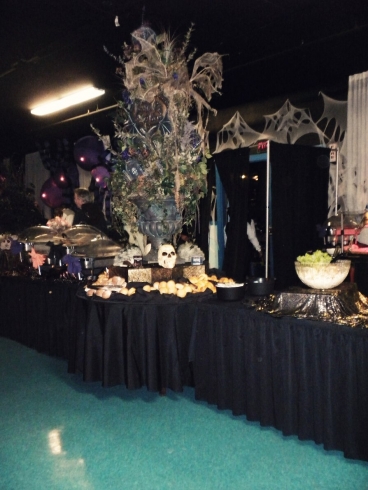 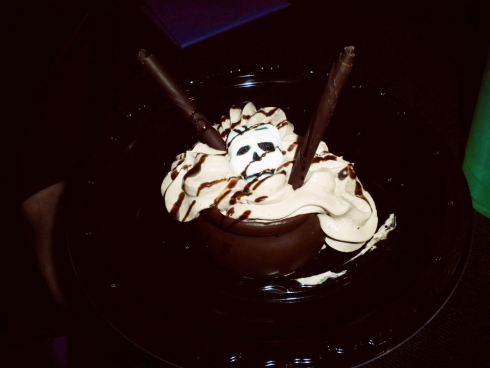 The desserts were so intricate that everyone swarmed the table and grabbed their treats first. I nabbed a chocolate caldron filled with the most decadent chocolate mousse that I’ve ever eaten. It was topped with a sugared skull, chocolate syrup and chocolate straws. Others walked past me with extremely detailed mint chocolate Frankenstein heads filled with green mousse. When the high-end desserts had been gobbled up, we were still left with a great selection of cookies and cakes. Bliss! 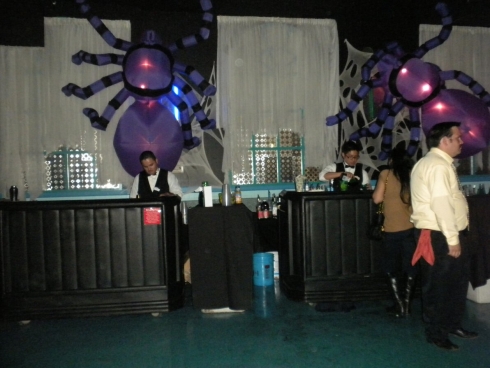 Because I attended the opening night event, the bar at the buffet happened to be an open bar. I’ve since heard that the drinks are on the pricy side, but well worth it. I was shocked at the size and strength of my Vodka Soda. Even if I would have had to pay for it, I would have felt that I got my money’s worth.

* Be prepared to walk away with a souvenir. For me, it was a cowboy hat; after opening day it’s supposedly a novelty beverage cup. Be sure to bring a purse if you want to keep your souvenir.

CarnEvil – For us who loathe clowns, this zone is beyond terrifying! There’s nothing like walking through a sudden burst of thick fog right into a psychotic clown who is wielding a knife. I had hoped that my strong drink from the Boo-fet would numb my fear a bit, but it only made this zone feel much more like a disorienting nightmare! 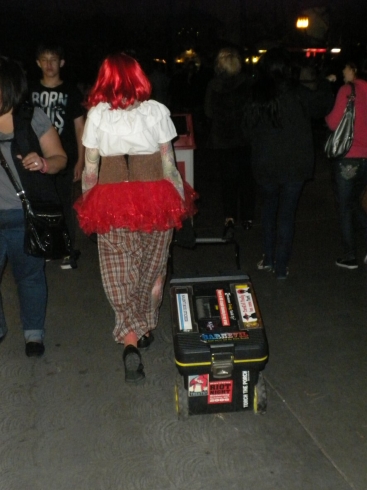 You'll be glad to see the back of CarnEvil's clowns.

Putting my intense fear aside, I have to admit that they had a great group of clowns. Some were scary, some were creepy, some were simply annoying … but the best clown of all was the obviously unhinged female who skipped around shuddering guests and twisted her body in ways that seemed completely unnatural for the human underneath the makeup.

Necropolis – Located in what is normally Camp Snoopy, this zone is vampiric with a twist of steampunk. From the guest’s perspective, Necropolis is a little convoluted because it has such a mix of monsters. I actually had to look up “Necropolis” when I got home to figure out what the exact angle was. 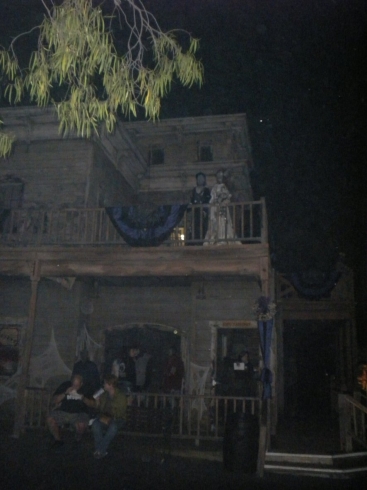 Ghost Town – Always a spooky crowd pleaser, Ghost Town plays host to monsters donning corsets and sheriff badges, guns and cowboy hats. This was the least scary zone, in my opinion, but that’s not to say that it was a disappointment by any means. The creatures here were more menacing than terrifying, and created a tense atmosphere that melded well with the haunted saloons and abandoned railroad tracks. This is a great place to lean against a wall and catch your breath after the other zones, all the while being acutely aware of the monsters eyeing you as they pass nearby – the calm before the storm, if you will. 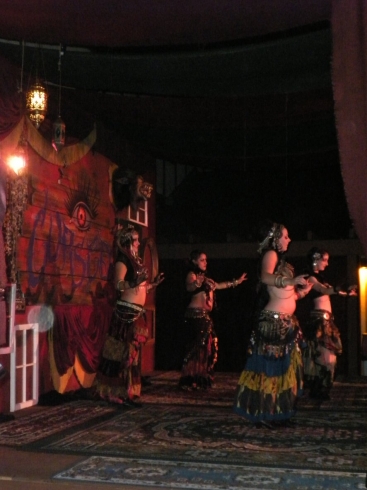 Gypsy dancers in a scare zone - it works!

Gypsy Camp: The Cursed Caravan – This was by far my favorite of the scare zones! The only con was that it was on the small side and I would have loved to have had more space to roam. It featured a stage show with Gypsy dancers, a palm reading tent, abandoned caravans and little nooks covered in straw for people to sit and drink in the sights and sounds. I loved the music which flitted throughout the camp and brought this gypsy culture to life.

Of these shows, I was able to catch Blood Drums and Cursed, both of which I loved! The performers from Street Drum Corps in Blood Drums were incredible. They put their souls (mwa-ha-ha!) into the music and created an energy that reached out and touched the audience. Everyone was entranced! Cursed was a deep and melodic show depicting dancers from the Red Moon Dance Company. The performances were broken up into group and solo numbers, and even featured a duo of sword dancers.

My absolute favorite maze was the dark and moody Terror of London which leads you through smoky alleyways filled with tortured souls. It had a “Jack the Ripper” vibe that left me with chills from head to toe. Sounds of crickets, stabbings, horse-drawn carriages, bell tower rings and thick English accents fill the night air as you pass by old gas lamps and graveyards. WANTED posters add an authentic and sinister touch to the maze walls. It was the one maze that I felt the need to revisit before leaving the park at the end of the night!

*I got in trouble for flash photography here. If you plan on taking photos, limit them to mazes that have strobe lights. 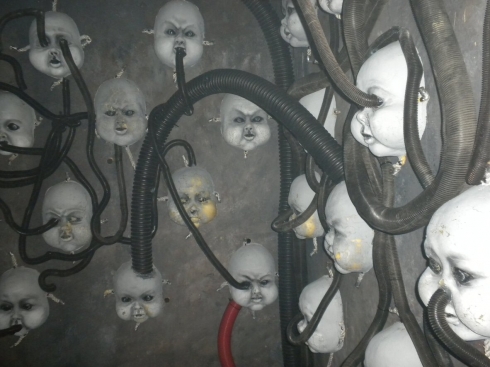 The Doll Factory came in a close second with its hanging dolls, decapitated toys and Borg-esque baby faces (for you Star Trek fans). The entrance of this maze reminded me of a nightmare-ish version of Disneyland’s Small World building. Each has moving gears and faces to prime the guest for what’s to come once inside, albeit one is sinister and one is sweet! 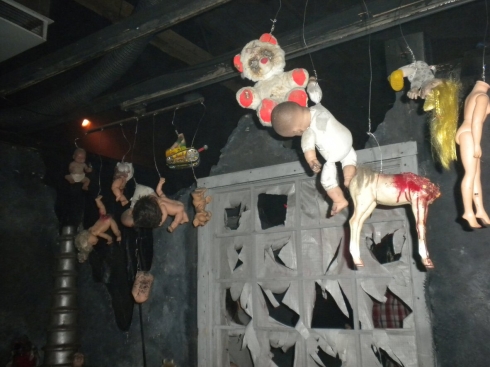 Everyone seemed to be sufficiently creeped out by the child-like women dressed in bloody baby doll dresses who sat on the ground, reaching out to unsuspecting guests. While this maze is a favorite of mine, I couldn’t help but feel relieved once I was safely through the exit!

* The 3-D mazes were exceptionally cool. Do yourself a favor and pay the $1 for the 3-D glasses.

"From a guy’s perspective, Knott's Scary Farm can be a bit tricky. Let's face it, the male ego is fragile. Knowing that you may well be exposed as a terrified screamer is not going to help. I've been to Knott's Scary Farm many times and was pretty sure I could keep my composure. Ten minutes into the experience this time, and I was questioning that! For the first time in years I saw the monsters actually chasing screaming park-goers! Knott's had put a stop to that for many years but it seemed they were going the extra mile for screams this year. I'm not going to lie; I was more freaked out this time around. They did an excellent job of making me jump!" 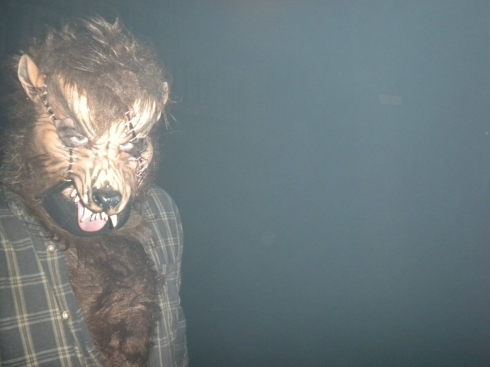 Don't let him creep you out. Your girlfriend's watching.

"The only thing that made this experience less terrifying was being with my girlfriend. It’s hard to scream when you’re laughing! Watching her squeal and jump was just as fun as the thrill of my own skittish jumps. In fact, she surprised me by cussing like a sailor when the clowns swarmed her! Going with a girl took the heat off of me a little. I don't know if the monsters think girls are easier targets, but whatever their rationale; I was ok with it! It was terrifying and hilarious all at the same time."

As I said at the beginning of this article, this has been the best Haunt yet. In fact, it was so good that I’ve decided to go again before the season is over. I’ll definitely be partaking in the “Boo-fet” and will opt for the preferred parking again. I’m looking forward to experiencing all of the things that I missed this time around!

If you attend this year, I would love to hear what your favorite mazes, shows and zones are. Please feel free to leave a comment below!