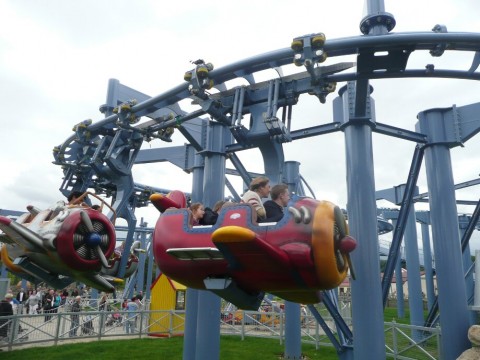 Flamingo Land has opened its brand new addition for the 2011 season, the Zooom rollercoaster. Aimed squarely at families with younger children, the ride is the first of its type in the UK. Is the latest addition to the park's line-up worth the wait?

Zooom is the first new ride at Flamingo Land since the 2009 opening of record-breaking coaster Mumbo Jumbo, although it is aimed at a different age group and cost significantly less to install. Nevertheless, the park has once again sought to differentiate itself by adding a unique ride, in this case the first Zamperla Air Force coaster to open in the country.

The coaster sits at the heart of a small new land, Swoosh, which also houses two flat rides - Swoosh Air and Sky Flyer. It opened to the public in July 2011, and while it won't excite older guests, it did attract a high level of interest from smaller Flamingo Land visitors during our trip to the park.

Zooom features an aeroplane theme, which extends to the design of the coaster's trains and to its station. This is designed to resemble a runway, and a model of a control tower is cleverly used to house the ride's operators. 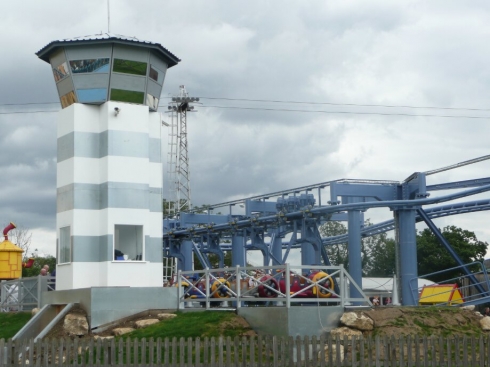 The ride features a short queue system, suggesting that Flamingo Land doesn't expect it to be swamped even on peak days. Despite its relatively low capacity (it only features a single train, and boarding takes a while), we didn't see large lines forming for Zooom despite visiting on a busy weekend during the school summer holidays.

Like other Zamperla Air Force rollercoasters seen in Europe to date, Zooom features a single train of five themed cars. Suspended from the track, these are designed to resemble Douglas Dakota aeroplanes and are similar in design to the gondolas on Zamperla's Flying Tigers children's ride. Each is designed to accommodate four children or two children and one adult - although we were able to cram two adults into a slot designed for two kids without too much discomfort. 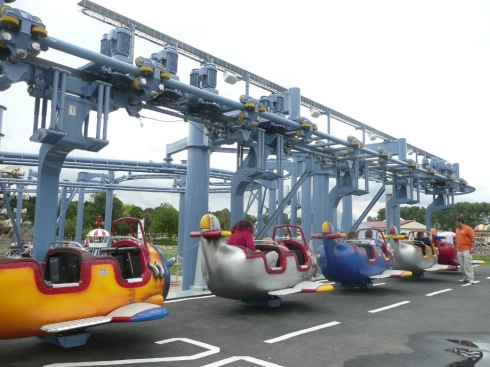 While adults will find the gondolas a little cramped, kids (the main audience for Zooom) will fit in quite comfortably. A simple lapbar system holds them in place, with the gentle nature of the ride ensuring that the whole experience is smooth for everyone on board.

Zooom is the first Zamperla Air Force coaster to feature a custom layout, which is longer than the standard 100-metre-long design. It features a "wild mouse"-style circuit, with the ride vehicles swinging outwards as they traverse a series of tight corners. You can see a full video of the ride in action below:

We found Zooom to be an enjoyable ride, with kids enjoying the sensation of "flying" around in the miniature aeroplanes. In terms of scale and excitement, it is a step up from Flamingo Land's other "kiddie" coasters, such as the Runaway Mine Train, and is slightly less yawn-inducing for parents as well. 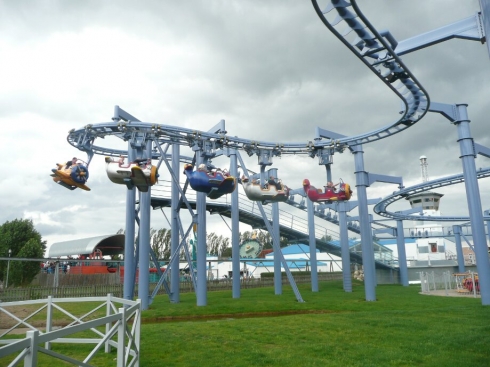 Zooom's gondolas swing outwards slightly as they traverse its corners.

The new ride's greatest weakness is its length, as despite the custom layout it is still over all too quickly. While this does mean that queues are processed more rapidly than they would be otherwise, some kids are likely to be disappointed that they only traverse the circuit once. Perhaps on quieter days ride operators might consider allowing them to ride twice in a row.

While Zoooom is only a relatively minor addition to Flamingo Land's increasingly impressive line-up of attractions, it is an exciting one for the park's youngest guests. While few adults will be attracted to its leisurely pace, kids' eyes will light up when they see its miniature planes. The ride offers a much closer experience to actually flying than the typical aeroplane-themed cycle rides found elsewhere (including right next to it, in the form of Swoosh Air). 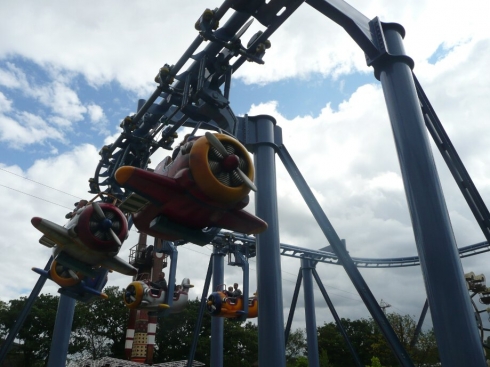 While we wish the ride experience lasted a little longer, we're pleased to see Flamingo Land again looking to offer a unique experience that cannot be found elsewhere in the UK. The park is likely to apply the same philosophy to its next major addition, and we look forward to seeing the result.

Have you experienced Zooom at Flamingo Land? Did it live up to your expectations? Let us know by adding your own review and rating.